A 7,000 year old bird-like statuette which has mystified Greek archaeologists has gone on rare display at the National Archaeological Museum in Athens.

Dubbed as the “7.000-year-old enigma” the 36 cm granite statuette from the late Neolithic era has been brought out of the museum’s hidden storerooms as part of the “The Unseen Museum”, an exhibit for visitors to view artifacts from the closed storerooms, which house some 200,000 antiquities not on daily display.

Unlike most Neolithic figurines made of soft stone, it is carved out of hard rock even though metal tools were not available at the time, and it is bigger than most Neolithic statues, which are rarely found over 35 cm tall. More puzzling still is the lack of clear indication of sex. Experts also cannot be sure of its provenance, as it belongs to a personal collection. They assume only that it is from the northern Greek regions of Thessaly or Macedonia.

“It could depict a human-like figure with a bird-like face, or a bird-like entity,” said museum archaeologist Katya Manteli to Reuters, adding, “The enigma has to do with (the fact) that we cannot identify with clarity its sex. It could be a pregnant figure but there are no breasts…On the other hand it lacks male organs so it is presented as an asexual figure.”

Manteli says archaeologists choose which artifacts will be brought from the closed storerooms of the museum each month for the exhibit, based on criteria such as their mystery and individuality. 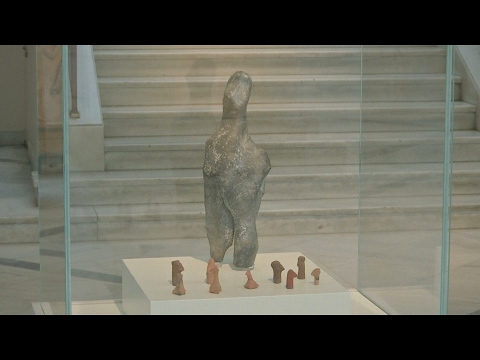