The Cambridge-based Greek forensic archaeologist Christos Tsirogiannis notified Interpol that he had identified four potentially-tainted antiquity scheduled to be auctioned by Gorny & Mosch in Munich, Germany on December 14, 2016. Each of the four ancient objects are traceable to photos in the confiscated Gianfranco Becchina and Robin Symes archives. Tsirogiannis has notified INTERPOL of his identifications asking them to formally notify both the German and the Italian authorities.

The antiquities identified by Tsirogiannis are:

1.An Etruscan bronze figure of a youth 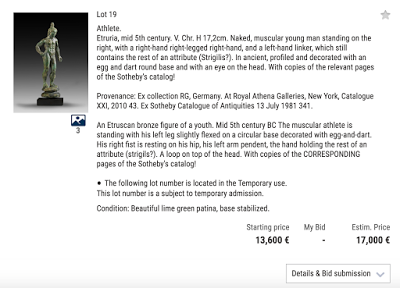 Tsirogiannis previously identified it in the Symes archive, while on offer through the Royal Athena Galleries in October 2010 along with several other antiquities whose images appeared in the Medici and the Becchina archives. In January 2011 these identifications were presented by Professor David Gill through his ‘Looting Matters’ blog and publicized in the Italian press by art and curruption journalist Fabio Isman through the art publication Il Giornale dell’Arte. Each notification published a copy of the Syme’s archive photo of the Etruscan figurine.

2.An Apulian red-figure situla of the Lycurgus Painter 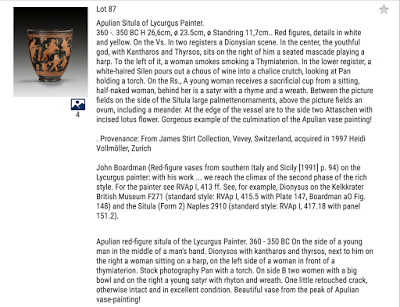 Montichelli is a convicted antiquities trafficker from Taranto who had a long-standing relationship with Gianfranco Becchina. Montichelli’s legitimate occupation was listed as a retired elementary school teacher, yet it seems he made enough money from the illicit proceeds of trafficked art, to purchase lucritive property (later siezed by the Italian authorities) in some of Italy’s more exclusive areas of Florence and Rome. It is interesting to note that the passage via Becchina in this lot’s collection history, pre-dates the auction house provenance written in the sale catalog by Gorny & Mosch.

3.An Apulian red-figure bell-krater of the Dechter Painter 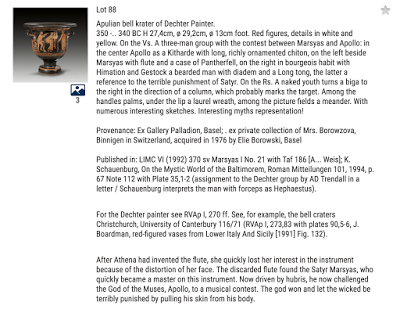 The Apulian red-figure bell-krater of the Dechter Painter is estimated at 350 – 340 B.C. Tsirogiannis provided a photo of this krater from the Becchina archive which was dated APR 4 ’89’ (4/4/1989). Note that the 1989 date on the unrestored object photo doesn’t match up to the date of the object’s inclusion in the Elie Borowski collection. Elie Borowski, whose vast collection of Mideast artifacts later formed bulk of Bible Lands Museum in Jerusalem, died in 2003. No stranger to the antiquities underbelly, former Getty antiquities curator Marion True told Italian authorities that Borowski, a Basel, Switzerland, antiquities dealer was also a client of Gianfranco Becchina.

4.A squat alabastron of the Gnathia-ware with the bust of a winged woman with sakkos 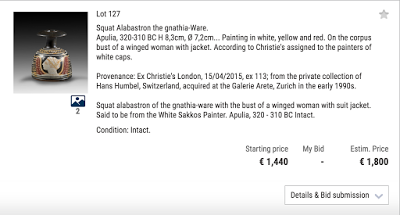 The squat alabastron of the Gnathia-ware with the bust of a winged woman with sakkos is said to be from the White Sakkos Painter and is estimated at 320 – 310 B.C. This alabastron is also depicted in a Becchina archive photo alongside other antiquities in the background.  The photo’s image is dated 24/9/1988 and was again sent to Gianfranco Becchina from convicted trafficker Raffaele Montichelli.

Since 2007 Tsirogiannis, a Cambridge-based Greek forensic archaeologist, has sought to identify antiquities of illicit origin in museums, collections, galleries and auction houses that can be traced to the confiscated Giacomo Medici, Robin Symes-Christos Michaelides and Gianfranco Becchina archives.