Obama’s visit in Athens through the White House’s lens

The Director of the White House Photo Office came with B. Obama in Athens and took unique photographs throughout the 2day visit.

President Barack Obama toured Greece’s most famous ancient monument, the Acropolis citadel, and delivered a speech to the Greek people, as he finished up the first leg of his final foreign tour as President before handing over the White House to President-elect Donald Trump. President Obama lingered at the base of the Parthenon, gazing at the columns and glancing around at the panoramic view of Athens as he chatted with his guide, Eleni Banou of the Culture Ministry’s antiquities division.

The official social media of the White House posted selected photos from his trip with a segment of his speech:

“The flame first lit here in Athens never died. It was ultimately nurtured by a great Enlightenment. It was fanned by America’s founders, who declared that ‘We, the People’ shall rule; that all men are created equal and endowed by our Creator with certain inalienable rights…The basic longing to live with dignity, the fundamental desire to have control of our lives and our future, and to want to be a part of determining the course of our communities and our nations—these yearnings are universal. They burn in every human heart.”

In addition to the photos the White House released a video from his visit to Acropolis and the Museum, that has more than 3 million views already.

“On my last overseas trip as president, I finally had the opportunity to visit Greece and take in the beautiful history of this country. Standing at the Acropolis, in the birthplace of democracy and the democratic values we hold dear as Americans, you gain perspective on the importance of a government of the people, by the people, and for the people – and how people, no matter what nation we belong to, will decide the kind of countries we will be, the ideals we’ll keep reaching for, and the values that will define us” he noted. 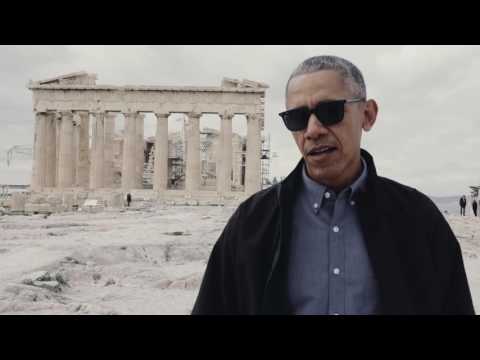