Two years before we met Steve Simons, who takes the images on ancient Greek vases and makes them move. The animations he creates tell stories from Greek mythology, the Olympics, or everyday life. The animations are created from the actual scenes which decorate ancient Greek vases. He tries to stay as close as possible to the original artwork, adapting it to create the animations. A few days ago, he published a new animation developed for the University of Oxford Faculty of Classics using a cup from the Ashmolean Museum.

It shows ancient Greeks at a drinks-party, or symposium (‘symposion’ in Greek). In the animation, the symposiasts begin playing kottabos. The game of flinging wine lees to knock down a target originated with Greeks living in Sicily, but quickly became popular all over the Greek world. In the comedy play, Acharnians, there’s a joke in which the character Dikaiopolis says that the Peloponnesian War was started by the antics of young men μεθυσοκότταβοι – drunk from playing kottabos (Aristoph. Ach. 524-529). The animation represents the flying wine as if it was painted with a dilute slip. A lot of care had to be taken to enable the characters to pick up their cups properly and for the player to be able to loop his finger into the cup handle at just the right angle.

The music on this animation is played by Barnaby Brown. The track is called ‘Apollo and the Python’.

At symposiums, groups of adult citizens gathered to enjoy each other’s company or to celebrate special occasions. Non-citizen men, and women who were professional entertainers or companions, might also attend. Guests usually reclined on couches facing towards each other and used a range of vases to mix, serve, and drink watered wine. The guests might have had dinner together beforehand. A symposiarch, or symposium leader, presided over the evening, pouring offerings for Dionysus, regulating the drinking, and managing the activities. It was their responsibility to set the tone of the evening and, in theory, to see that everyone behaved properly.

Steve has been making vase animations since 2007. With a history in software engineering, Steve studied multimedia production and design before becoming a freelance animator. 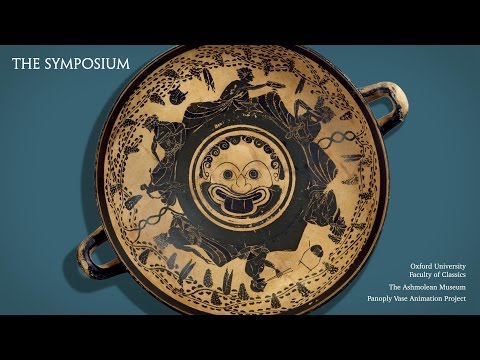