A group of researchers IBM’s research laboratory in Zurich, led by a Greek researcher, have announced that they have built a working, artificial version of a neuron. The team was led by Evangelos Eleftheriou and also Angeliki Pantazi was also a member of the research team.

The invention, described in a paper published in the journal Nature Nanotechnology, consists of a small square of germanium antimony telluride held between two electrodes. Germanium antimony telluride, a common ingredient in optical disks, is what is known as phase-change material. This means it can change its phase from an amorphous insulator to a crystalline conductor when hit with a strong enough electric pulse — thus acting like both, a resister and capacitor, and mimicking, to a certain extent, the behavior of biological neurons’ lipid bilayer membrane.

“We have been researching phase-change materials for memory applications for over a decade, and our progress in the past 24 months has been remarkable,” said IBM Fellow Evangelos Eleftheriou. “In this period, we have discovered and published new memory techniques, including projected memory, stored 3 bits per cell in phase-change memory for the first time, and now are demonstrating the powerful capabilities of phase-change-based artificial neurons, which can perform various computational primitives such as data-correlation detection and unsupervised learning at high speeds using very little energy.”

According to the company, this demonstration marks a significant step forward in the development of energy-efficient, ultra-dense integrated neuromorphic technologies for applications in cognitive computing. The research result, inspired by the way the biological brain functions, could open the door to imitating the versatile computational capabilities of large populations of neurons, at densities and power comparable to the brain.

The new artificial neurons can be used to detect patterns and discover correlations in real-time streams of event-based data, for example in Internet of Things (IoT), financial analysis, and social media applications. Large populations of these high-speed, low-energy nano-scale neurons could also be used in next-generation neuromorphic chips. “Populations of stochastic phase-change neurons, combined with other nanoscale computational elements such as artificial synapses, could be a key enabler for the creation of a new generation of extremely dense neuromorphic computing systems,” said IBM researcher Tomas Tuma.

Evangelos Eleftheriou  is a Greek electrical engineer. He is an IBM Fellow and responsible for the Cloud and Computing Infrastructure department at the IBM Research – Zurich laboratory in Rüschlikon, Switzerland, and is also the group leader for the Memory and Cognitive Technologies group in that department. Evangelos Eleftheriou received a B.S degree in Electrical Engineering from the University of Patras, Greece, in 1979, and M.Eng. and Ph.D. degrees in Electrical Engineering from Carleton University, Ottawa, Canada, in 1981 and 1985, respectively. He joined the IBM Research – Zurich laboratory in Rüschlikon, Switzerland, as a Research Staff Member in 1986. Since 1998, he has held various management positions and currently heads the Cloud and Computing Infrastructure department of IBM Research – Zurich, which focuses on enterprise solid-state storage, storage for big data, microserver/cloud server and accelerator technologies, high-speed I/O links, storage security, and memory and cognitive technologies.

Angeliki Pantazi received Diploma and Ph.D. degrees in Electrical Engineering and Computer Technology from the University of Patras, Greece, in 1996 and 2005, respectively. She joined IBM Research – Zurich, Switzerland in 2002 as a Ph.D. student and became a Research Staff Member in 2006. Her research interests include scanning-probe techniques with emphasis on high-speed nanopositioning, control technologies for magnetic tape drive systems, emerging memory concepts such as phase-change memory, and neuromorphic technologies. She has published more than 80 refereed articles and holds over 40 granted and pending patents. was named IBM Master Inventor in 2014 and became a senior member of the IEEE in 2015. She was a co-recipient of the 2009 IEEE Control Systems Technology Award for contributions to nanopositioning for MEMS-based storage and other applications, the 2009 IEEE Transactions on Control Systems Technology Outstanding Paper Award, the 2011 IBM Pat Goldberg Memorial Best Paper Award and the 2014 International Federation of Automatic Control (IFAC) Industrial Achievement Award for the application of advanced control technologies in the nano-domain to magnetic tape data storage. 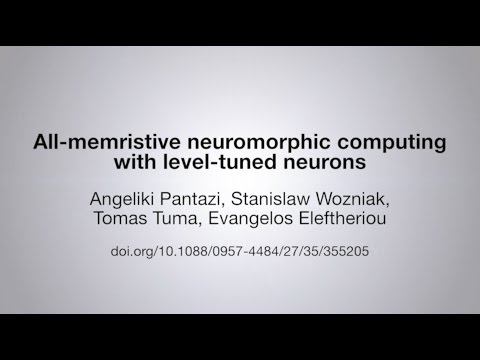