The episode of the top-rated Emmy and Peabody award-winning CNN Original Series Anthony Bourdain Parts Unknown, about Naxos was broadcasted with big success.

Anthony Bourdain Parts Unknown follows the world-renowned chef and best-selling author as he travels the globe to uncover the little-known, off-the-road, and sometimes seemingly-familiar areas of the world in a celebration of their diverse foods and culture.

It’s one of many moments of solitary tranquility, interspersed throughout episode three during which Bourdain embarks on a trip to the Cycladic island of Naxos for some R&R. The island feels almost a world away from Greece’s economic turmoil and the swell of refugees flowing over the country’s porous borders. The tourism industry on the islands forges ahead in spite of these economic stressors, but the issues continue to weigh heavy on the minds of Greek citizens.

“I wanted to get away from it all. Coast gently, gently into another season of television.”

The host seems inclined to spend time by himself taking naps, cooking, and swimming in the pool at his pristine private villa, but also parties with mountain villagers and dives around an early 20th century shipwreck. Local commercial fisherman enlighten Bourdain on the state of the fishing industry in Greece, which has been severely impacted by declining stocks, decreased demand, and prices. A political music group called the Stray Bitches also shares a perspective on the country’s current governmental woes over plenty of Greece’s favorite spirit — raki.

How Bourdain likes to spend vacation? “The pressures of the outside world I don’t want to think about. I’m on a Greek Island here, it’s a beautiful day, I’m planning on passing out on the beach, snorkeling, you know maybe some water colors, do a little cooking, more napping, eating, napping, contemplate mysteries of the universe, or nap, either one, or eat cheese, all of those are honorable options. I mean that’s vacation to me: staying put and doing nothing.” 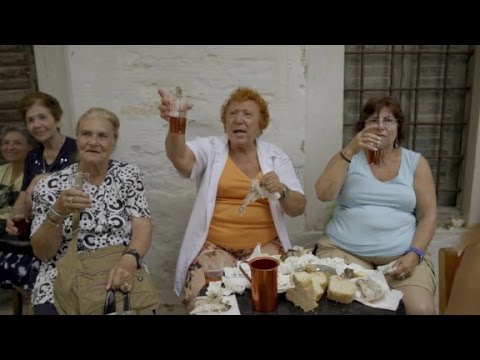