New York Times made a tribute to the Greek fitness guru, who has takes social media by storm. The article is entitled “Kayla Itsines Is Winning Instagram Followers, One Ab Post at a Time”. She has  at least 4.6 million Instagram followers!

The Advertiser announced the list with the 10 most inspirational people in South Australia for 2015, honouring 10 people who come form all walks of life that have inspired us the most this year. Kayla Itsines was among this list. With her fiance Tobias Pearce, started her journey towards fame eight years ago and has now built a fitness empire.

Read the article below:

You could say that Kayla Itsines has been in training for her current title, Instagram’s biggest fitness star, almost since birth. When she was a child and wanted to go anywhere — a friend’s, the playground, the beach — her father would tell her to do, say, 10 push-ups or 40 situps first.

Ms. Itsines, a 24-year-old personal trainer from Adelaide, Australia, doesn’t think this is odd. She tells this story happily, repeatedly calling her dad — a teacher and fitness enthusiast — “the best.” She also wasn’t allowed an Xbox or any kind of gaming console, she added, because both her parents wanted her to be outside, running around.

“I got it in my head to be fit when I was younger,” said Ms. Itsines, who played basketball from an early age. “I don’t have a sob story. I’m fit, I grew up in an awesome family in a beautiful place.”

Sitting in the W hotel while on a New York visit to surprise some followers, Ms. Itsines spent a full seven minutes enthusing about her boyfriend and business partner, Tobias Pearce, whom she met about three years ago at the gym (with help from Facebook). He accompanies her on all her trips.

Ms. Itsines’s life sounds idyllic, but unlike most people on social media, she shows very little of it. Instead, her Instagram feed, which has at least 4.6 million followers, is full of motivational sayings, silly e-card type sentiments (“I wish I could text my pets”) and photos of her abs, the definition of her six-pack so sharp you could cut yourself on it.

Most of all, there are often jaw-dropping transformations of followers who do her 28-minute high-intensity workouts, first released to the world in 2014 as the Bikini Body Guide (better known on social media as #bbg), an e-book that costs about $50.

Her sole vices appear to be taking pictures of her two Siberian huskies and cleaning — that Dyson vacuum cleaner post, she points out, was not sponsored. And yet women, particularly those younger than 30, can’t get enough of her. (Fans include the actress Allison Williams and the model Candice Swanepoel.)

Women post progress photos of themselves in a bikini or underwear (Ms. Itsines does not believe in the scale, and it’s rare to see a “pounds lost” figure among her followers). They also post photos of license plates that read “I <3 BBG” and gel manicures that show fingernails painted with #BBG and a girl with a high ponytail (Ms. Itsines’s signature hairstyle) doing a squat.

Between sales of her guides, her foam rollers, her water bottles and her recently released app, she’s almost certainly much wealthier than your average 24-year-old (or your average anyone), but she won’t confirm even how many employees her company has besides her and Mr. Pearce. (It was Mr. Pearce who encouraged her to create her guides after watching the response on social media to her photos of her clients’ transformations.)

There are at least two publicists, one and sometimes both of whom sit in on interviews, which may or may not explain why Ms. Itsines couldn’t think of an answer to a question about the biggest misconception about her.

“I don’t say anything I’m not meant to, or come across any way that I’m not supposed to,” she said, sounding sweet as raspberry tea, which is what she sometimes drinks when she craves sugar. 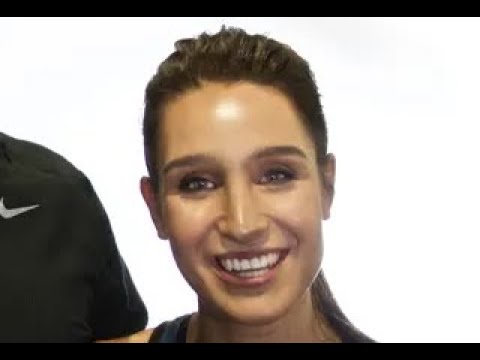