Can your computer work with light instead of electricity?

A team of scientists, led by a Greek researcher, from the Max Planck Institute (MPI) of Quantum Optics in Garching, Germany, the Texas A&M University in College Station, Texas, and the Lomonosov Moscow State University report that it takes electrons in krypton atoms slightly more than 100 attoseconds to respond to extremely short light pulses. It is the first direct measurement of the electron’s innate sluggishness.

What made this discovery possible is the development of a new tool that produces extremely short and powerful light pulses, explains Cretan physicist Eleftherios Goulielmakis, who leads the “Attoelectronics” research group at the MPI of Quantum Optics. The device, which is being called a light-field synthesizer, is able to produce light pulses that are just one half of a wavelength long.

“People didn’t think it was possible to compress light into something shorter than a full oscillating cycle,” says Goulielmakis.

The MPI researchers start out with white light pulses that carries a wide frequency spectrum. They separate this light into four frequency bands, and then compress them with chirped mirrors, creating extremely short pulses in those four frequency bands. Finally these pulses are combined, resulting in pulses consisting of just a half-cycle wave-form. These pulses are so short that they last only the time it takes the light to travel half its wavelength, about 380 attoseconds (one attosecond is a millionth of a millionth of a millionth of a second). More than half of the original white light’s energy is compressed into that half waveform, making the power of the light enormous, 50 gigawatts. Because the delivery time is so short, the energy packed in such a light pulse won’t knock you over, but it is sufficient to kick an electron out of place within an atom.

Previously, scientists have used x-ray pulses, which have a much shorter wavelength. But those pulses knocked the electrons out of the atom altogether, making it impossible to study their behavior when still part of the atom. In contrast, when attosecond light pulses hit an electron, the electron is pushed away from the atomic nucleus, but remains attached to the atom. “Each time, the electron springs back like a punch ball and oscillates, emitting UV radiation that can be measured,” says Goulielmakis.

By blasting krypton atoms with series of attosecond pulses, they could record changing patterns of the UV radiation produced by the bouncing electrons. At the same time, they created computer models of the interaction of the light pulses with the electrons and obtained similar patterns. However, the simulated patterns would match exactly the measured patterns only if the computer model included a delay of up to 100 attoseconds for the electrons to respond to the pulse.

“It is as if the electron tells you, ‘You try to move me fast, but I will move as fast as my quantum nature dictates,’” says Goulielmakis. “For many years, if you looked at introductory textbooks on nonlinear optics, you would see that this topic is actually covered in a half a paragraph…. this phenomenon was stated to be immeasurably fast,” he says. That was when scientists only had femtosecond-length laser pulses. We are now in the attosecond era, and in future ultrafast optoelectronics—based on the interaction of light with electrons at petahertz clocking rates—these delays will become significant and measurable, says Goulielmakis. 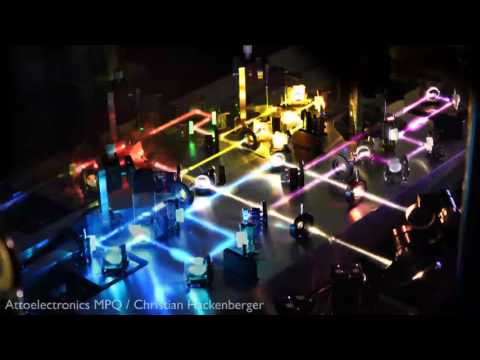