2 Greek museums are nominated for the European Museum of the Year Award (EMYA) in 2016. In total, 49 museums are competing for the award of the best museum in Europe. EMYA was established in 1977 under the auspices of the Council of Europe and is awarded annually aiming to encourage the best practices and innovative actions by museums in Europe.

The Greek nominated museums are the Tegea Archaeological Museum and the Museum of Typography Yiannis & Eleni Garedakis.

The winning museum will be announced at a ceremony to be held from April 6-9 at Tolosa and San Sebastian in Spain.

The Tegea Museum’s dossier was put together in the spring of 2015 and submitted to the organization with the support of the Stasinopoulos-Viohalco Public Benefit Foundation. The museum is located in the traditional settlement of Alea in Tripoli, in the centre of the Peloponnese and was one of the first public museums of the independent Greek state which was founded in 1907. It has recently been extensively refurbished, with improvements to both the building and the exhibition, using EU funds and reopened in 2014.

The unique in Greece Museum of Typography is found in Chania, not far from the city, in the Park of Local Industries in Souda. It constitutes the life vision of its founder, Yannis Garedakis, founder and editor of the newspaper “Haniotika nea”. The Museum of Typography officially opened its gates in May 2005. The museum collection includes hard to find, cast iron printing presses and other machines, as well as tools and objects that present the development of typography from birth, in the days of Gutenberg, up to our days. Rare books and newspapers, as well as our precious lithographies, travel the visitor in the art of Typography. The effort for the enrichment of the museum with new exhibits and the contact with people of Typography are continuous. In April 2012 the museum was extended by adding a new wing with collection exhibits that are related to the development of graphic arts, as well as two important exhibitions regarding the evolution of typography and the history of writing.

Read the 49 nominees for the European Museum of the Year Award 2016. 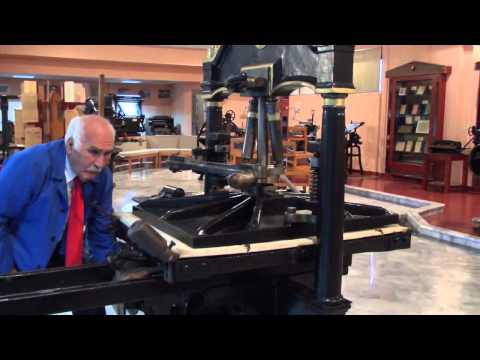