Constantine M. Dafermos of Brown University will receive the 2016 Norbert Wiener Prize in Applied Mathematics. Presented by the AMS and the Society for Industrial and Applied Mathematics (SIAM), the prize honors Dafermos “for his foundational work in partial differential equations and continuum physics.”

The hallmark of the work of Constantine Dafermos is the way it combines deep physical insight and a high degree of mathematical rigor. He is one of the world’s top experts in the theory of conservation laws. These fundamental laws express in mathematical terms the fact that, within an isolated physical system, certain quantities do not change when time passes or when the position of the system is changed. Examples include conservation of energy and of momentum.

Dafermos has made seminal contributions to the theory of nonlinear conservation laws, introducing innovative and powerful new methods and applying the theory to such areas as continuum mechanics, gas dynamics, and nonlinear elasticity. His work on the mathematical aspects of thermomechanics has also been highly influential. “His work is distinctly characterized by an understanding of the fundamental issues of continuum physics and their role in developing new techniques of mathematical analysis,” write Gui-Qiang G. Chen and Athanasios E. Tzavaras, in an article prepared for the occasion of the 70th birthday of Dafermos (Acta Mathematica Scientia, 2012).

Dafermos is widely known for his book Hyperbolic Conservation Laws in Continuum Physics (Springer Verlag, third edition, 2010), which is renowned as the authoritative guide to the subject. Chen and Tzavaras call the book a “monumental treatise” and go on to say: “In its three editions the book has kept up to date with the most recent developments on the subject of Conservation Laws and is a definitive work that will be referred to by future generations of scientists.”

Dafermos is the Alumni-Alumnae University Professor of Applied Mathematics at Brown University. In addition to several honorary degrees, he has received the SIAM W.T. and Idalia Reid Prize (2000), the Cataldo e Angiola Agostinelli Prize of the Accademia Nazionale dei Lincei (2011), the Galileo Medal of the City of Padua (2012), and the Prize of the International Society for the Interaction of Mechanics and Mathematics (2014). He was elected a Fellow of SIAM (2009) and a Fellow of the AMS (2013).

Presented every three years, the AMS-SIAM Wiener Prize honors research in applied mathematics, in its highest and broadest sense. The prize will be awarded on Thursday, January 7, 2016, at the Joint Mathematics Meetings in Seattle. 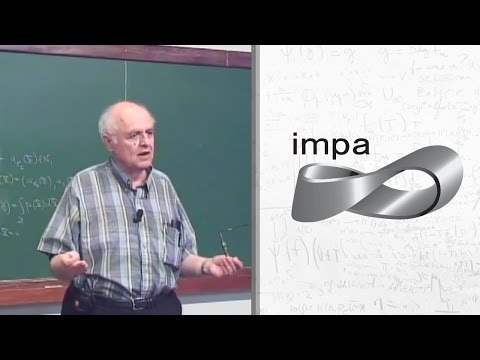