A Greek beach among the best in Europe

The top 10 list of the best beaches in Europe is being presented by europeanbestdestinations.com. Ideal for relaxing, partying or simply walking, they are simply the most beautiful beaches of the European coastline. One beach of a Greek island came second. 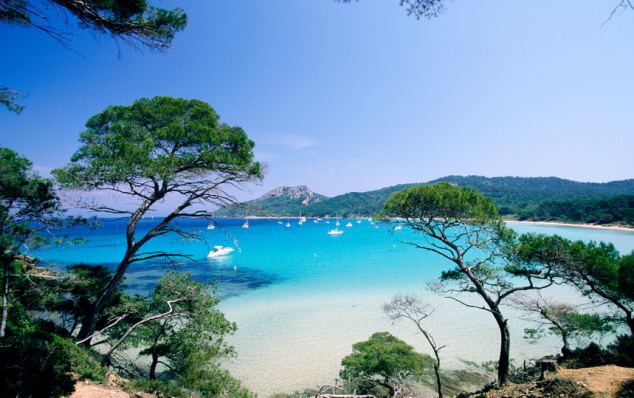 Bordered by a beautiful but fragile pine forest, just as beautiful as other beaches of Porquerolles, the beach Notre Dame is however much less crowded. The ongoing revegetation program requires that everyone take care of the environment. 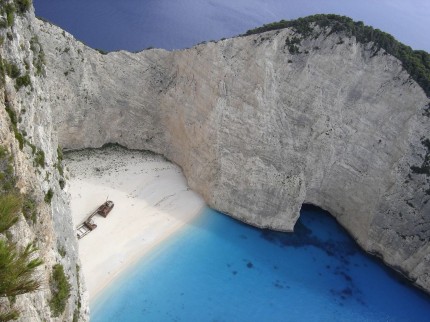 Navagio Beach, or Shipwreck Beach, is an exposed cove, sometimes referred to as “Smugglers Cove”, on the coast of Zakynthos, in the Ionian Islands of Greece. It has been so named since 1983, when the alleged smuggler ship Panagiotis was wrecked on the beach while transporting cigarettes. Navagio is located on the north-west shore of Zakynthos (Zante), in the Municipality of Elation. The area is defined by its sheer limestone cliffs, white sand beaches, and clear blue water, which attract thousands of tourists yearly. The strip of beach is accessed only by boat. Regular tours to the beach depart from Porto Vromi to the south, and from Agios Nikolaos and Cape Skinari to the north-east. Boats also arrive from the harbour of Zakynthos city. 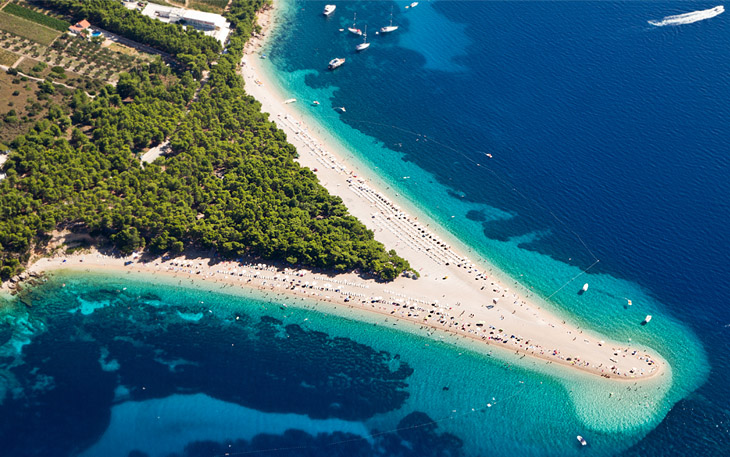 The Zlatni Rat, often referred to as the Golden Cape or Golden Horn (translated from the local Chakavian dialect), is a spit of land located about 2 kilometres (1 mile) west from the harbour town of Bol on the southern coast of the Croatian island of Brač, in the region of Dalmatia. 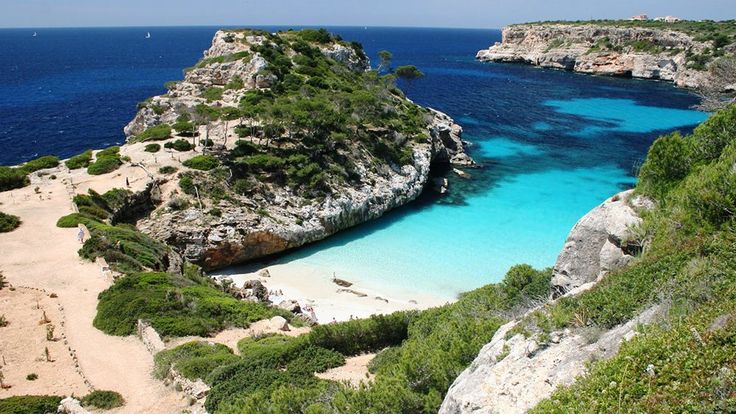 Crystal clear waters, open to the winds from east to southeast highlight a sandy bottom great for scuba diving and small boats to anchor at a depth which ranges from three to four meters. A two nautical miles of the port of Cala Figuera Santanyí.

Ölüdeniz (literally Dead Sea, due to its calm waters even during storms; official translation name Blue Lagoon) is a small village and beach resort in the Fethiye district of Muğla Province, on the Turquoise Coast of southwestern Turkey. Ölüdeniz remains one of the most photographed beaches on the Mediterranean. It has a secluded sandy bay at the mouth of Ölüdeniz, on a blue lagoon. The beach itself is a pebble beach. The lagoon is a national nature reserve and construction is strictly prohibited.The seawater of Ölüdeniz is famous for its shades of turquoise and aquamarine, while its beach is an official Blue Flag beach, frequently rated among the top 5 beaches in the world by travelers and tourism journals.

Praia da Marinha (in English: Navy Beach) is one of the most emblematic and beautiful beaches of Portugal, located on the Atlantic coast in Caramujeira, Lagoa Municipality, Algarve. In 1998, it was awarded with the distinguished “Golden Beach” award by the Portuguese Ministry of the Environment because of its outstanding natural qualities. Furthermore, many pictures of this beach have often been used in promotional material and “Guides of Portugal” distributed around the world. This beach is not only for its beautiful cliffs, but also for the high quality of the water. Marinha Beach has often been used by international advertising agencies and by television producers in advertising campaigns. 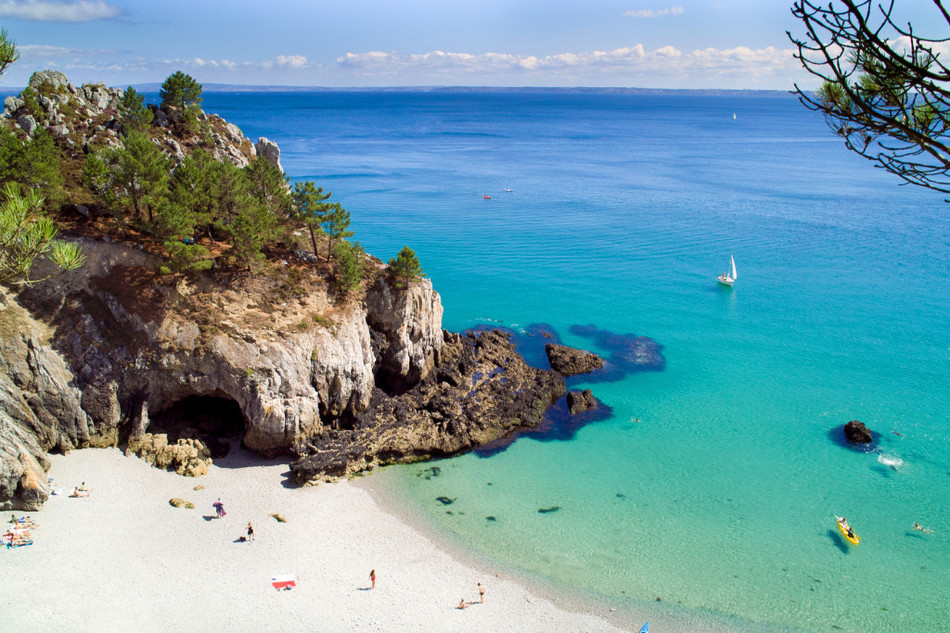 With its Mediterranean beach-like setting and maritime pines, the natural cove of Île Vierge (Virgin Island), also known as Point of Saint Hernot, is a surprising and unusual place in Brittany. Come and discover all of the aspects of this unique natural gem by boat, kayak, on foot via the GR34 trail or with flippers/mask/snorkel. Right from the start, it’s completely worth it! Be careful, the entrance to the beach is a little steep. 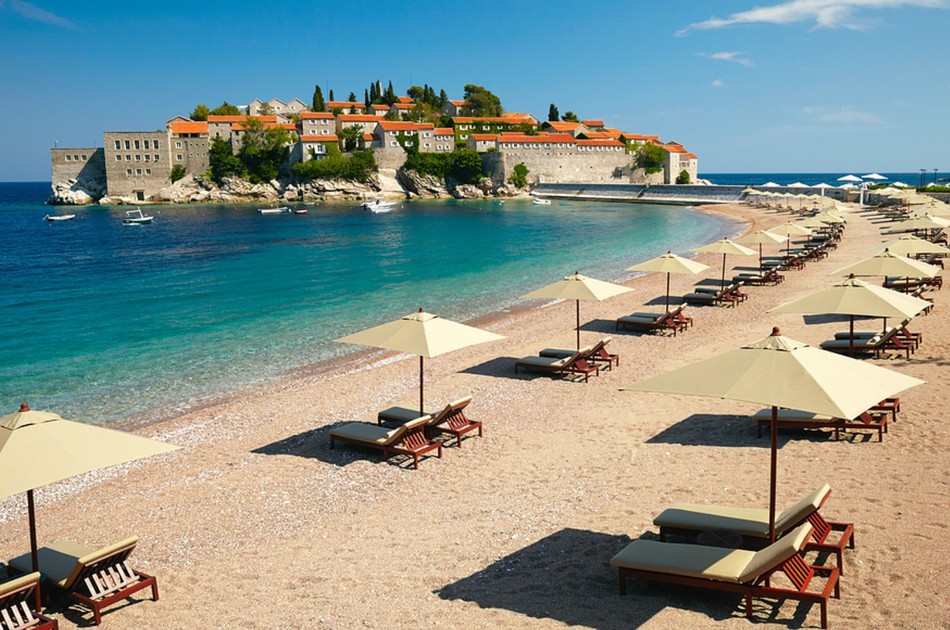 Sveti Stefan, now Aman Sveti Stefan including the Villa Miločer; formerly Sveti Stefan Hotel is a small islet and hotel resort in Montenegro, approximately 6 kilometres (3.7 mi) southeast of Budva. The island has a 2 kilometres (1.2 mi) coast line in the central part of Montenegro Adriatic coast line. It is situated to the south of Budva between Przno and Sveti Stefan villages. The pink sandy beaches of Sveti Stefan, Miločer Beach and Queen’s Beach are part of the coast line. 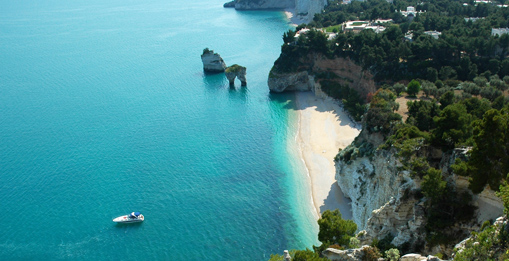 The coast of Gargano houses numerous beaches and tourist facilities, including resorts such as Vieste, Peschici and Mattinata. The two major salt lakes of Lesina and Varano are located in the northern part of the peninsula. Monte Gargano is the site of the oldest shrine in Western Europe dedicated to the archangel Michael, Monte Sant’Angelo sul Gargano. Other tourist attractions include the cathedral, the episcopal palace, the Abbey of Santa Maria of Ripalta and the volcanic rocks dating back to the Triassic Period, known as “Black Stones”, as well as the Sanctuary of San Nazario. 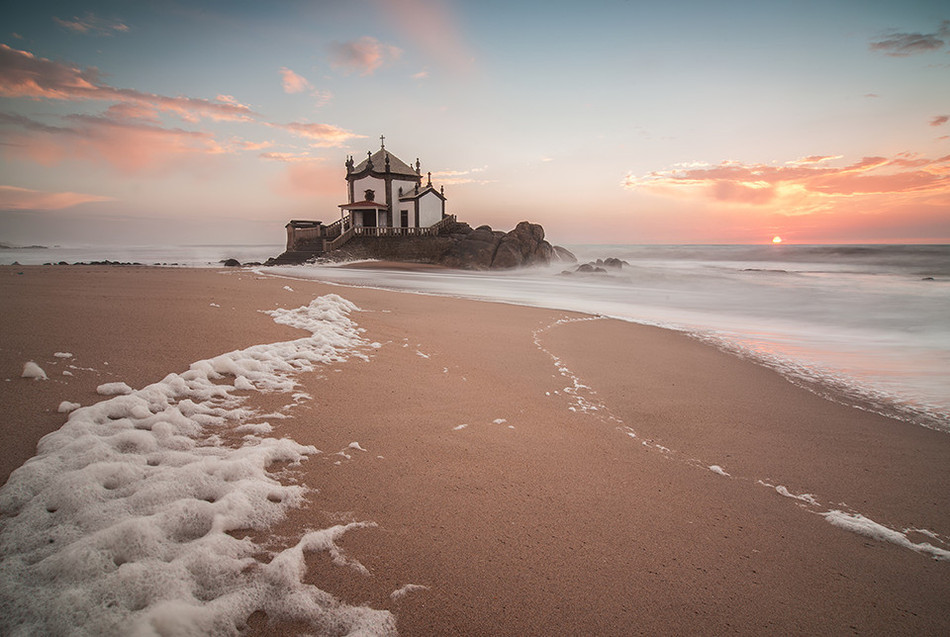 Miramar is a small seaside village near the towns of Gulpilhares and Arcozelo, in the municipality of Vila Nova de Gaia, in the subregion of Greater Porto, Portugal (Grande Porto). It is an upmarket residential area south of the river Douro, most known for its beach – Praia de Miramar (Miramar Beach) – and the small chapel called Senhor da Pedra (Lord of the Rock), which forms the central attraction of a yearly festival.