He developed an Android app that types with the eyes

Evangelos Skodras, PhD student at the Wire Communications Laboratory of the Department of Electrical and Computer Engineering at the University of Patras received 2 awards for the development of EyeType application.

Skodras developed an Android app called EyeType that gives the user the possibility to control what is typed on the device’s keyboard with his eyes, by recording the person’s eye movement. This is a real innovation in the field that will enable people suffering from ALS (Amyotrophic Lateral Sclerosis), LIS syndrome (Locked-In Syndrome) or quadriplegia, who are only able to move their eyes – to communicate by using a smartphone or tablet.

The PhD student has received two international awards in 2015 for the app, from the Institute of Electrical and Electronics Engineers (IEEE) and the European Association of Students of Electrical Engineering (EESTEC).

At the EESTEC competition, EyeType took home the innovation award. The category included a total of 51 Android apps submitted by 717 researchers from 54 countries.

Evangelos Skodras was born in Patras in 1985. He received his degree in Electrical and Computer Engineering from the University of Patras, Greece, in 2009. He is currently working towards his PhD at the Wire Communications Laboratory. In Aprill 2011 he worked for a three month period as a visiting PhD researcher in the Multimedia Signal Processing Group at EPFL, Lausanne, Switzerland. His research interests are in the area of computer vision and include eye localization, gaze tracking, machine learning, object detection and tracking. 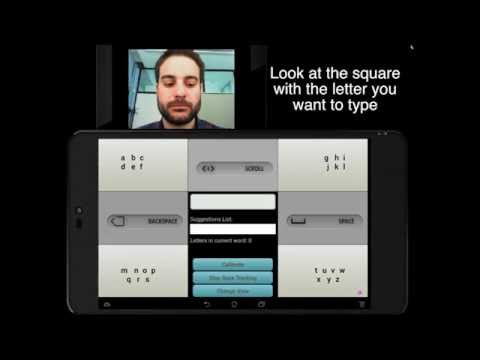