TIME: The most surreal easter celebration in Chios

Time magazine makes a tribute to Chios and the small village of Vrontados. The article is entitled «See the most surreal easter celebration» and the journalist Olivier Laurent desctibes the festivities «fireworks turn into a friendly war».

In the late 1800s, when Turkey occupied the small island of Chios, which now forms part of Greece, the local Orthodox Christian population wasn’t allowed to celebrate Easter. But, in the small village of Vrontados, two churches came up with a cunning plan to keep the Turkish authorities away while they celebrated Jesus Christ’s resurrection from the dead: they staged a fake war using cannons and fireworks.

This tradition, born of religious fervor, continues to this day.

Each year, as Easter Sunday looms, the parishes of the Agios Markos and Panagia Erithiani churches, which sit on opposite hills, unleash thousands of homemade firework rockets on each other, creating one of the world’s most surreal pyrotechnic displays.

Photographer Marco Kesseler witnessed the event last year. “Up until the Saturday before Easter, it’s a very secretive process,” he tells TIME. “They build these rockets all year long, chopping down trees, turning the wood into charcoal that they mix with sulfur and potassium nitrate to make a basic gunpowder.”

These homemade rockets are then stocked in houses up in the mountains – away from prying eyes.

“In the days before the event, the village is almost deserted,” says Kesseler.

“If you ask anyone, they wouldn’t tell you anything. On the day of the Rocketwar, as it’s now called, the village comes to life. It’s all about the celebration of Easter and people really get into it. The rockets are brought out with a kind of fanfare. In the morning, they build these huge firing ranges. One of the teams has this incredible barricade that goes across the valley, and they use scaffolding poles and planks to create this walkway that’s 10 to 20 feet up in the air. In the evening, they launch some rockets to test their aim. And when dusk comes, they all start to fire.”

Within just a few hours, more than 100,000 rockets are shot across the valley, illuminating the village under the gaze of hundreds of spectators.

At 11:30 p.m., a ceasefire is called between both sides to allow parishioners to enter their respective churches for mass. “They start again while people are in the churches,” says Kesseler, “before calling for another ceasefire after midnight, at the end of the service.”

The goal for both teams is to hit the opposite church’s bells. The team with the larger number of hits wins the war, but since it’s always impossible to count all successful hits, both teams agree to a draw and a rematch is called for the following year. “It’s their excuse to continue this tradition,” says Kesseler.

The next day, the village’s streets are littered with spent cartridges and sticks. “As the village wakes up, people come to collect old sticks either to reuse them the following year,” says Kesseler. “It’s an incredible spectacle.” 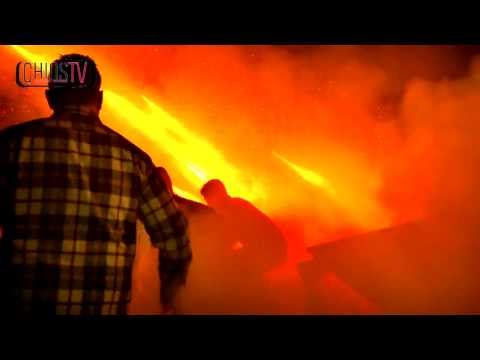