Travel guide Lonely Planet takes its readers to a journey in Greece and in particular to the beautiful locations used as a perfect backdrop to famous movies. The readers are given the opportunity to trace the footsteps of the stars to the most idyllic beaches and dramatic mountainscapes that amazed Hollywood. 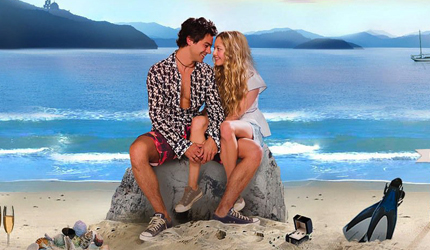 Mama Mia! (2008) This Hollywood confection sees Meryl Streep romping in overalls and Amanda Seyfried tracking down her father on the islands of Skiathos and Skopelos. These diminutive beauties in the Sporades chain are blessed with some of the Aegean’s loveliest beaches, so it’s little wonder that in July and August Skiathos, especially, gets packed with sun-starved Europeans. 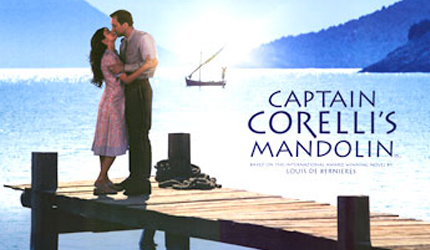 Captain Corelli’s Mandolin (2001) Nicolas Cage and Penelope Cruz lit up the screen from Kefalonia, a large, wild island in the Ionian chain. Their hit Captain Corelli’s Mandolin is based on Louis de Bernières’ novel of war and love, and takes advantage of Kefalonia’s rural splendor. The tranquil cypress- and fir-covered island is breathtakingly beautiful with untamed mountain ranges, rich vineyards, soaring coastal cliffs and golden beaches. 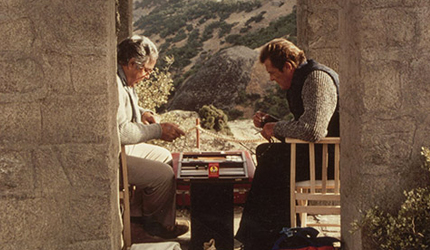 For Your Eyes Only (1981) Roger Moore’s James Bond memorably dashes around the monks’ walkways at the magical stone pinnacle-topping monasteries of Meteora. While there were once magnificent late-14th-century monasteries perched dramatically atop all 24 spires, only six are still occupied. Moni Agias Triados, which was featured in the film, also has the most remote feel, and the views of the valley below are extraordinary. Inside, look for beautiful art such as the Judgement of Pilate and the Hospitality of Abraham. Parts of the film were also shot in Corfu. 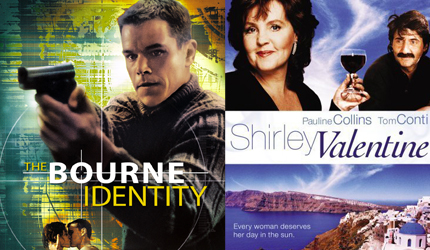 Shirley Valentine (1989); Bourne Identity (2002) In a study in contrasts, the classic Liverpool housewife, Shirley Valentine (Pauline Collins) gets her groove back in glittery Mykonos, as does hunky Jason Bourne (Matt Damon) when he tracks down his paramour (Franka Potente), renting scooters on a dazzling azure bay. In real life, the island – a perennial favourite for jetsetters the world over – earns its reputation with its quaint but boutique-packed old town, partying beach scene and glamorous nightlife.

Zorba the Greek (1964); Two Faces of January (2014); The Inbetweeners Movie (2011) Who can forget Anthony Quinn dancing on the beach in Zorba the Greek? That classic film (based on the Nikos Kazantzakis novel) –  as well as scenes from Patricia Highsmith’s Two Faces of January, which was brought to the silver screen by Viggo Mortensen, Kirsten Dunst and Oscar Isaac – was shot in Crete, Greece’s largest, most southerly island. The popular lad flick The Inbetweeners Movie also took advantage of this rugged, independent isle, whose size, distance and free-wheeling history give it the feel of a country unto itself. With its dramatic landscape, myriad mountain villages, unique cultural identity and some of the best food in Greece, plan for plenty of time to explore. Two Faces of January also got exceptional permission to film at the Acropolis in Athens, making for an exquisite opening sequence. 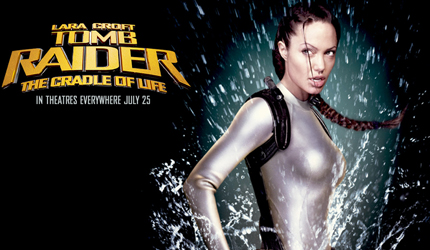 Lara Croft Tomb Raider: The Cradle of Life (2003); Summer Lovers (1982); The Sisterhood of the Traveling Pants (2005) Angelina Jolie brings her brand of archaeological swagger to Santorini in the sweeping opening of Tomb Raider: Cradle of Life, when an underground temple is revealed during an earthquake, kicking off the action. In Summer Lovers, Darryl Hannah and Peter Gallagher’s action relied on their ménage à trois. Wonderfully volcanic Santorini also starred in The Sisterhood of the Traveling Pants: this is where one of four young friends, Lena (played by Alexis Bledel), falls in star-crossed love. In reality, as in the movies, the startling sight of the submerged caldera almost encircled by sheer lava-layered cliffs – topped off by clifftop towns that look like a dusting of icing sugar – will grab your attention and never let it go. 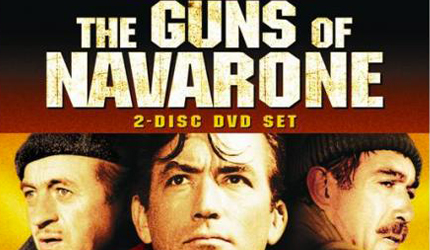 The Guns of Navarone (1961) In the classic film loosely based on the novel by Alistair MacLean, superstars Gregory Peck, David Niven and Anthony Quinn form part of a cadre out to destroy a strategic German gun emplacement in Greece during WWII. The action was filmed on the famous island of Rhodes, and a bay on the southeast still sports Quinn’s name (though his efforts to buy it after filming became embattled). A pilgrimage to Rhodes’ Unesco World Heritage–listed Old Town is a must. One of the world’s finest surviving examples of medieval fortification, 12m-thick walls enclose a magnificent mesh of Byzantine, Turkish and medieval buildings, such as the imposing Palace of the Grand Masters, which was restored, but never used, as a holiday home for Mussolini. 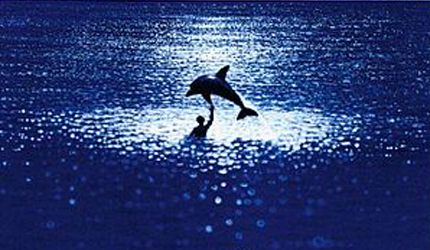 The Big Blue (Le Grand Bleu, 1988) The one-of-a-kind Luc Besson film about daring free divers was shot in the cobalt waters off Amorgos. The slender isle lies on the far southeastern arc of the Cyclades, and its long ridge of mountains grows in stature as you approach across the sea, the high summits often wreathed in plump purple clouds. The star of the island, also seen in the film, is Moni Hozoviotissis: an extraordinary chalk-white monastery built into the base of a soaring cliff on the island’s southeast coast. Today, there’s plenty of scope for beaching, but Amorgos is much more about archaeology and the outdoor world – there’s great walking, rock climbing and, of course, scuba diving (or free diving for the bold). 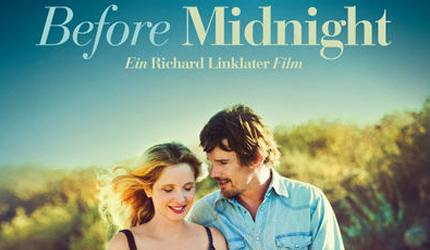 Before Midnight (2013) The last in the trilogy of intimate Richard Linklater movies starring Ethan Hawke and Julie Delpy sees our protagonists sparring and soul-searching in the Mani region of the Peloponnese. Scenes from the movie jump from the Kardamyli waterfront and former home of writer Sir Patrick Leigh Fermor to the luxe Costa Navarino Hotel on the opposite shore. The Mani area is notoriously beautiful and raw, and features unusual tower settlements that were built as refuges during clan wars from the 17th century onwards. Explore the steep tumbling skirts of the Taÿgetos Mountains (threaded with wonderful walking trails) and the tiny coves and ports nestling beside, like Jesse and Céline. 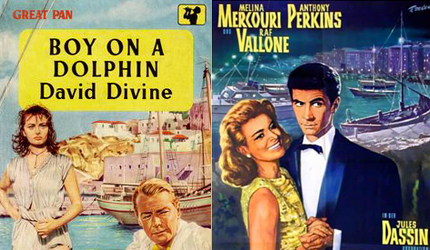 Phaedra (1962); Boy on a Dolphin (1957) Little Hydra in the Saronic Gulf was the setting for two tales of distinctly different but equally passionate Phaedras. Melina Merkouri starred in Phaedra, a contemporary (for 1962!) retelling of the Greek myth of Phaedra. Her doomed paramour and stepson Alexis is played by a young Tony Perkins. In Boy on a Dolphin, Sophia Loren plays Phaedra, the sponge diver who discovers and tries to capitalise on an ancient statue of a boy riding a dolphin. Her co-stars were Alan Ladd and Clifton Webb. Both movies, and the still shots of the actors relaxing in the harbour between takes, show how little Hydra has changed today. The town’s picturesque horseshoe-shaped port and gracious stone mansions remain heritage-protected, and the island is still known as a retreat for artists, writers and celebrities. Hydra allows no motorised vehicles – leading to unspoilt trails along the coast and into the mountains – but an exception was made during the filming of Phaedra, when a small sports car zipped around the pedestrianised curves.