Amphipolis: The chronicle of the excavation

The Chronicle Of The Excavation

With the removal of eleven stones from the wall sealing, the Sphinxes of Thassos marble were revealed entirely. The height of the Sphinxes is 1.45 m. The total height of the head is estimated to reach two meters. In the logs, the plasticity and the detailed work of the sculptors is depicted. Parts of the Sphinxes” feathers were found as well, allowing their full reconstruction. The back portion of the statue of the Lion of Amphipolis was also found. Both the Sphinxes and Leo of Amphipolis seem to come from the same workshop.

The gap behind the Sphinxes at a depth of about two meters was cleared. The upper portion of the marble doorway was found under the basis of the Sphinxes. Covered with fresco of Ionic architrave. It is decorated with red, blue and black colours.

With the partial removal of sand, behind the entrance,  the back side of the entrance was revealed. The fresco of architraves has traces of  red and black colours. The side and back of the Ionic capitals of the pilasters, which are coated by a fresco is painted over with the same colors.

The removal of blocks of the wall sealing revealed almost the entire front of the burial monument, which is a highly original composition for the architecture type of the Macedonian tomb of the last quarter of the 4 th century BC.

The mosaic floor was revealed. In the center and in front of the entrance, disclosed pebbled floor, consisting of rectangular and square shapes, surrounded by black and white diamonds.

With the removal of soil from the vestibule, the space behind the wall of the Sphinxes, revealed part of a marble floor, with white, small irregular fragments of marble, on red background, preserved in excellent condition.

Technical work shielding the burial monument and the surrounding area to avoid any effects due to weather conditions.

With the removal of soil from the second septal wall, a marble rectangular plate, length 4.2m, width 1m. 0.21m thick was discovered, at a distance of about 2 meters from the dome to 4.5 meters, about the floor, in excellent condition. It is part of the ceiling of the room.

Two excellent caryatids from Thassian marble were discovered. The face of the Western Caryatid survives almost intact, while on the eastern a part is missing. The caryatids have rich curls that cover their shoulders, carry ear tags and wear sleeved tunic.

The axonometric representation of the burial monument, by the architect M. Lefantzi

The whole body of the two Caryatids was unearthed. The Caryatids were “buried” in the ground between the septal wall and the tomb’s sealing. The face of the eastern Caryatid was found in the ground during excavations and will be attributed to the statue. The first wall, sealing the front of the Caryatids, was removed, revealing the continuity of the two sculptures’ robes. The robes’ folds are of great artistic value, while the Caryatids, from the outside, appear to slightly lift their chitons with the corresponding hand. The members of the multidisciplinary team found that the inner arms of the Caryatids were not supporting the architrave.

The team enters to the third chamber of the monument by the existing hole in the wall, in order to determine the structural condition of the chamber.

By removing three rows of the limestone wall caryatids that are 2.27 meters high have been entirely uncovered in front of the second partition wall. They are dressed in long coats and robes with fringes and rich folds. They wear sandals with high platforms that are decorated in red and yellow colours, their toes have been sculpted in great detail. They stand on 1.33 m long and 0.68 m wide marble pedestals of which about 0.30 m are revealed at the moment. They follow the style of marble wall covering used in all compartments. The distance between the two pedestals is 1.68 m, as is the opening of the first partition wall with the sphinxes. The surface of the red coloured pedestal supporting the east Caryatid  is clearly visible. Parts of the Caryatids’ hands and arms have also been discovered.

Removed the last two domes of the wall sealing revealing the whole marble pedestals of the Caryatids.

The mosaic floor was revealed, which covers the entire surface area ie, 4.5 m. wide by 3 m. long. The mosaic is made of small pebbles, white, black, greyish, blue, red and yellow. The background of the scene is in shades of gray-blue. The main scene depicts a chariot moving, drawn by two white horses, which is led by abearded man, with a wreath of laurel on his head. In front of the chariot, God Hermes is depicted as the conductor of souls to the afterlife, as psychopompos. The composition has a direction from east to west. The mosaic is damaged in the center, in the shape of a circle, with diameter 0,80m. However, many parts of the damaged portion were found in sandy embankment. The mosaic has not been fully revealed in the east and west end, as excavations in this part are still underway.

The mosaic is fully uncovered, exposing a figure of a woman whom archaeologists have identified as Persephone. The female figure is shown with fiery red hair, cloaked in a white robe fastened together with a red ribbon. She raises her left hand and wears a bracelet. Archaeologists are now certain that the mosaic, 4.5 by 3 meters, depicts the abduction of Persephone by Pluto. That would make the bearded man crowned with the laurel Pluto, not the person buried in the tomb. The third figure is Hermes, who guides the chariot to the Underworld. The abduction of Persephone by Pluto is a common theme in artwork of the Hellenistic period. A similar depiction appears in a mural in the nearby Aiges royal tomb.

Lina Mendoni stated: «We find the scene of the abduction of Persephone in the so-called mural tomb of Persephone, in the royal cemetery of Aigae. We have a second display with Pluto and Persephone, in a scene of sacred marriage, in the backrest of the marble throne in the tomb of Eurydice, mother of Philip in Aegae. The scenes are linked with the cult of the underworld, the Orphic cult-descent into Hades and the Dionysian rites. The head of the house of Macedon was archpriest of these cults. I remind you of the recent survey of the National Centre of Scientific Research «Demokritos» for residues of the mask found in the remains of King Philip’s bones. According to experts, it was the mask, which Philip wore during Orphic rites. Therefore, the mosaic in our case has symbolic importance, which may indicate a relationship of the «occupier» of the tomb with the Macedonian house. The political symbolism is very powerful at all times».

For the first time since the discovery of the Tomb of Amphipolis, the findings are represented in a digital three-dimensional model including the mosaic.

At a depth of 0.15.below the surface of the threshold the marble head of the Sphinx was identified and revealed.  Its height is 0.60 m. The head is identified and assigned to the trunk of the Eastern Sphinx, which was inlaid. At the bottom of the neck survives undamaged the cross section of the bearing at the point of insertion of the shank. The head has wavy locks, bearing traces of red color, which fall in the left shoulder. Fragments of the Sphinxes” wings were also found.

For the first time the Ministry of Culture released a video of 2 minutes and 10 seconds with footage of the excavation process and the disclosure of the mosaic.

Upon removal of sandy backfill for the fourth site was located in the second part of the marble door, well preserved.

The archaeologist in charge of the Amphipolis excavation, Ms. K. Peristeri, Director of Antiquities Serres says:

«We are working on the basis of archaeological layers, the sandy soil is removed gradually and carefully. We use tape to remove the soil, which is checked throughout the procidure and then sieved. Where necessary, depending on the texture of the soil, we use shovel or scoop to remove. With special attention soil was removed from the mosaic floor, which was revealed gradually, by sections». 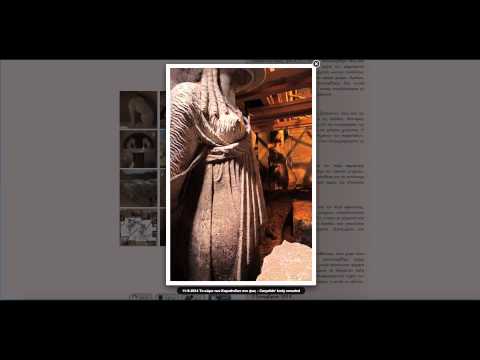