Steve Simons takes the images on ancient Greek vases and makes them move, some of the vignettes he creates tell stories from Greek mythology, the Olympics, or everyday life. The animations are created from the actual scenes which decorate ancient Greek vases.  He tries to stay as close as possible to the original artwork, adapting it to create the animations.

Steve Simons with Sonya Nevin made a website named Panoply, combining Steve’s animation skills with Sonya’s expertise in ancient Greek culture. Together they colaborate with museums, universities and schools  and use these animations to spark all sorts of teaching and learning activities.

Steve has been making vase animations since 2007.  With a history in software engineering, he studied multimedia design before going freelance as an animator. Sonya did her doctorate on ancient Greek warfare at University College Dublin.  She is now a research fellow and visiting lecturer at the University of Roehampton in London.  She has worked and volunteered in the Ure Museum, the UCD Classical Museum, and the Royal Museums Greenwich.  Sonya’s research and teaching interests include ancient mythology, religion, warfare, and historiography. 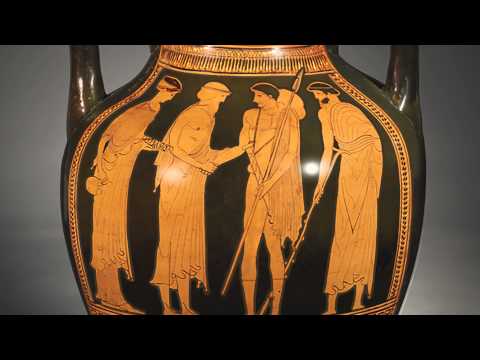