G.Kourounis stepped inside one of the world’s most dangerous volcanoes

George Kourounis once again amazed the world with his new adventure at the volcano Vanuatu in South Pacific. Sam Cossman and George Kourounis are among the first explorers to have stepped inside one of the world’s most dangerous and inaccessible volcanoes. They described the volcano in Vanuatu in the South Pacific as being like a “window into hell.”

More people have visited the moon than the lava filled crater in Vanuatu. They were helped by two guides, Geoff Mackley and Brad Ambrose, and spent four days on the volcano. They made two descents into the fiery abyss.

«Going down into the crater of Marum has been a dream of mine for many years. It was exhilarating, to say the least. Getting to Marum was kind of like a reverse climbing of Everest. The volcano fought back at us, and we had to deal with terrible weather, tremendous heat from the lava, descending and ascending 400 meters of near vertical, loose rock face, acid rain so strong that it could have come from a car battery, and a variety of other craziness” Kourounis told The Huffington Post.

The duo had to wear protective suits because of the extreme heat and to stop acid rain from burning them. Kourounis also says he got so close to the lava that splashes of it melted a hole in his rain jacket and also a part of one of his cameras. 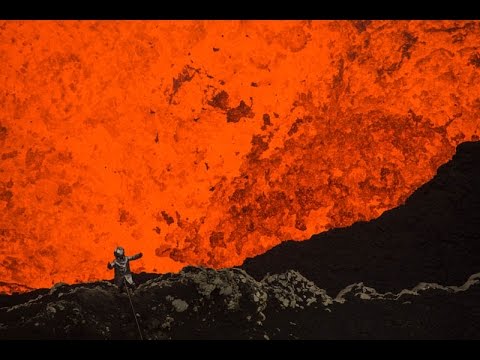