Olympic Greek goddess statue in the centre of Vancouver

The Olympic Greek goddess statue was unveiled in Vancouver, Canada. The statue, which was a gift from the ancient city of Olympia, home of the Olympic Games, marks Vancouver’s entry into the club of Olympic host cities. Hundeds of people gathered to admire ‘Nike’ the Greek goddess at the corner of Thurlow and Cordova for the official unveiling of the statue. The statue,which is worth about $500,000, was designed by a renowned Greek sculptor Pavlos Angelos Kougiomtzis.

Olympia has been giving versions of the statue, which stands 3.8 metres tall and weighs about 900 kilograms, to Olympic host cities since 1996.
The Consul General for Greece, Ilias Kremmydas, says the new statue represents a triple victory. ”It is a victory for the city of Vancouver, who joined the exquisite club of Olympic host cities four years ago,” says Kremmydas. “It is also a victory for Greece, strengthening its ties to Canada, and Vancouver in particular. The statue is a huge victory for the connecting link between Vancouver and Greece.”

Vancouver Mayor Gregor Robertson says the main reason for the delay, it is placed four years after it arrived in Canada, is the city’s desire to place it near Jack Poole Plaza.

“A lot of structural work to put a statue like this close to the Olympic cauldron, and working with the community, took some years to sort out all the details.”

The statue’s permanent home is steps away from the cauldron. 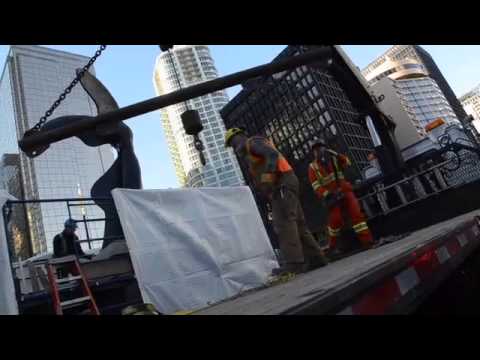