The CERN exhibition comes to Athens

The impressive interactive exhibition “ Accelerating Science “ created by the CERN, in order to bring the public closer to the great experiment came to Greece and the Eugenides Foundation from 12 April to 31 May.

The interactive » walk » takes us through the evolution of the Universe and the fundamental structure of matter. The exhibition is held in cooperation with the Greek- Education, School of Applied Mathematical and Physical Sciences, the national Technical University, the Division of Nuclear Physics and Particle Physics at the National University of Athens, Institute of Accelerating Systems and Applications and the Union of Greek Physicists.

«Accelerating Science» presents in a simple and understandable way what exactly the scientists do in the underground facilities of CERN, the most important research center in the physics of elementary particles, a few tens of meters below the Franco-Swiss border near Geneva.

«This report was created to show the public what exactly does the Large Hadron hadronic (LHC)» says Dr. Manolis Tsesmelis, Director of International Relations of the European Centre for Nuclear Research and Professor of Physics at the University of Oxford. «Our goal is to show the public the fundamental questions that we are trying to answer through the experiments of LHC. Furthermore we focus on the same accelerator, technology and the way it operates. An important part of the exhibition is the part of the applications that could have the technology and the science surrounding the LHC at CERN and generally how it applies in everyday life and in our society. In Greece, the exhibition will be presented twice: the first time at the Eugenides Foundation and the second at the International Fair of Thessaloniki next September. It is the only country in which the exhibition will be presented twice in a year».

For the general public, admission is free . 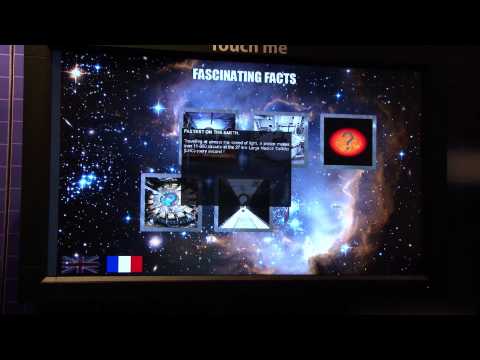