John Catsimatidis’ fortune, a man who grew up in a poor neighborhood of Harlem, is estimated over 3.3 billion dollars, taking into account his group of companies which includes the largest chain of food supermarkets in New York and Florida, 400 Petrol Stations, while he also deals with the Real Estate.

Forbes magazine included him to the Forbes 400 list with the wealthiest people in America for 2016 is in the 194 place with his wealth estimated at 3,3 billion dollars.

He lost a bid to become New York mayor in 2013. He’s trying to keep his voice heard by the people, now with his own Sunday morning radio show in New York called «The Cats Roundtable.»

His family emigrated to the US from Greece when he was an infant and growing up he helped his busboy father make ends meet by working nights at a grocery store.

«I grew up poor but always dreamed of becoming an Aristotle Onassis» said in an interview.

In 2007, he closed with a turnover of 3.3 billion dollars and he employs 8500 workers. Catsimatidis, was working as a laborer at a supermarket, while he was attended at the University NYU from which he never managed to get his degree. Nevertheless, this university, which is one of the top ten in the USA, proclaimed him honorary doctorates and entrepreneur of the year 1997. Currently he is a member of the municipal administration of the University of New York. He has made many donations to various institutions, the church and the Democratic Party. 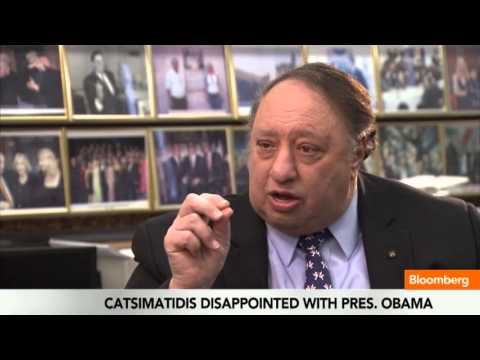