An explorer, inventor and a juggler of runny eggs

Eugene Trivizas was born in Athens in 1946. He’s best known as the author of popular children stories; however, his primary career is a lot different. He studied Law and Economics and he’s currently Professor of Criminology at the University of Reading in Great Britain and visiting professor to several prestigious universities of the world.

Trivizas is a lawyer, a graduate of the School of Law, Economics and Political Sciences of the National and Kapodistrian University of Athens and has also received a Masters in Law from University College and a PhD degree on Law from London School of Economics and Political Science. He’s also a Senior Research Fellow at London University. Currently, Trivizas is a Professor of Criminology and Comparative Criminology and also the Director of Criminal Justice Studies at the University of Reading. Moreover, he has been teaching courses at Bramshill Police College, Central London Polytechnic and London School of Economics. During the years 1993-1998, he was also a visiting professor of Criminology at the Panteion University of Athens.

Eugene Trivizas has authored over 150 books, like novels, fairytales, theatrical plays, reading books, short stories, comics and educational books and has been regularly writing for children magazines. It’s not an easy decision to make and sift his works; however, the most popular works of Eugene Trivizas are Fruitopia and The Island of Fireworks.

Since his early age, he has been writing literature. His theatrical play Scarecrow’s Dream was staged at the theatre of the British Museum in Great Britain during the European Arts Festival in 1992. Later that year, a Z. Rudrinski’s translation of his play A Thousand and One Cats earned him the 1st Prize in an international theatrical play contest, organized by the Polish Youth Arts Center. In 1993, Triviza’s book The Three Little Wolves and the Big Bad Pig ranked 2nd in the American Bestseller List for Picture Books. Triviza’s books have been endorsed by BBC, included in Greek and American school readers and also translated in tens of languages.

An alternative biography of the major Greek author is recommended to his fans on his official page on Facebook. “Eugene Trivizas is an explorer, inventor and a juggler of runny eggs. He has discovered the Island of Fireworks, Fruitopia, Piperu, Koutsoulistan, Kumasilandia, The Land of Lost Kites and The Province of All Colours Except but Pink. His most famous inventions are: Gargalios (a tickling machine for frustrated fellows), the Electric Suctionscope (a telescope and vacuum cleaner, a device friendly to the user who doesn’t merely want to gaze at the stars but rather suck them down to earth and make garlands out of them), the Edible Confetti, the Bathtub with Twelve Holes, the Flying Windmill, the Steps Slide, the Melodic Umbrella, the Bow Tie for Dwarfs and the Retrospective Mirror (mirroring your image of 10 years ago). Eugene lives on the Island of Fireworks together with his Parrot, Cynthia, his White Elephant, Pukipon, Lilly, his Spotted Leopard, the Invisible Horace, the Invisible Kangaroo and many other friends and acquaintances. Eugene owns a unique collection of old fairytales items. His rare collection is made out of a feather of the Sleeping Beauty’s pillow, a shoestring of the Puss’s in Boots right boot, a brick of the Three Little Pigs’ house, the eye glasses of Little Red Riding Hood’s grandmother and the wick of Alladin’s oil lamp.” 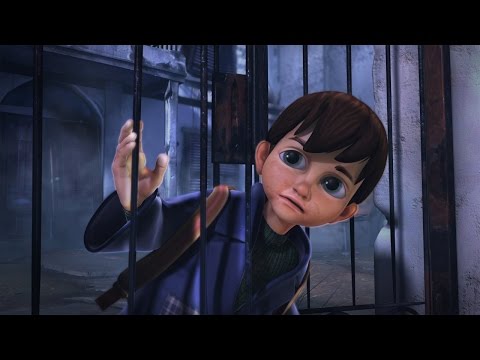