The sculptor whose work is being taught in Brazilian schools

Nikos Floros, the sculptor who has won the admiration of the public, including in New York, Rome, Abu Dhabi, Russia, has received dozens of awards and distinctions, has exhibited worldwide, and his sculptures are in major museums around the world and in private collections.

Fancy dresses, fairytale gowns, striking handbags are just some of the sculptures of the internationally renowned artist. His art style is unique, as he uses aluminum from soft drink cans, with a patented technique. 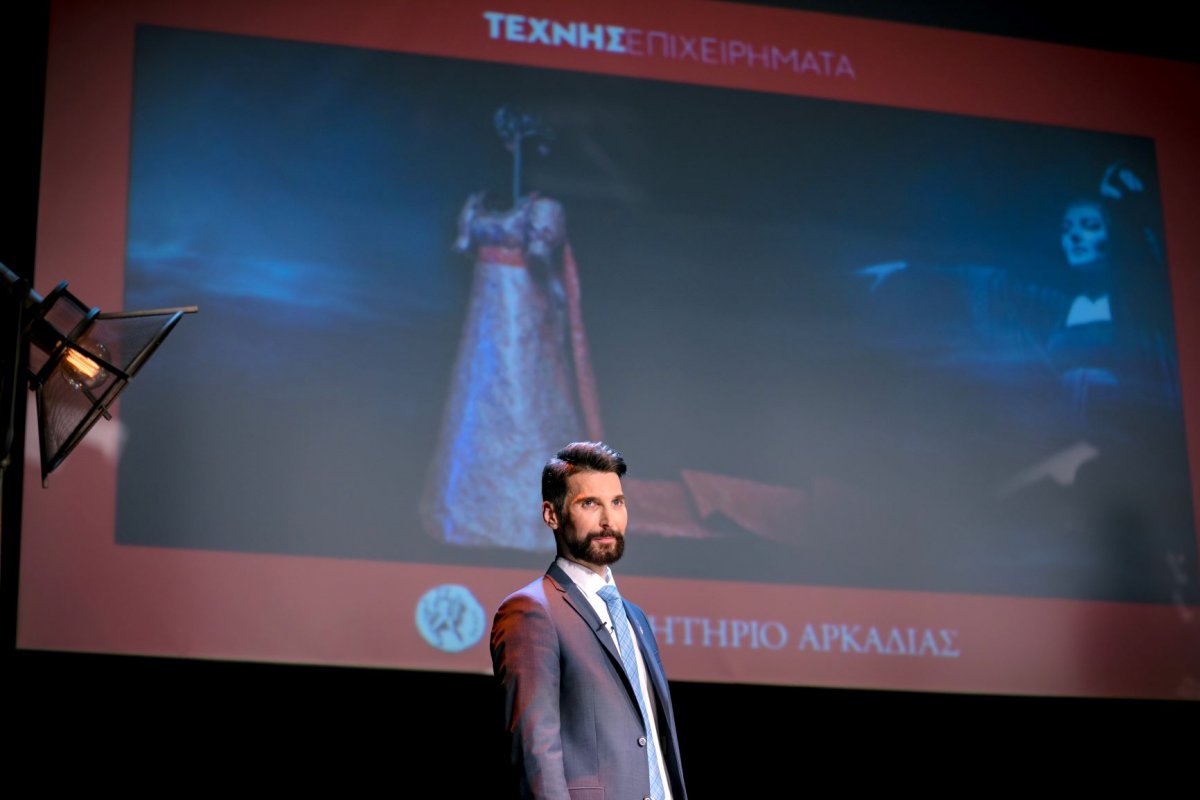 Nikos Floros was born in Tripoli, grew up in Athens, and lived and worked in many major cities around the world. He studied classical piano, dramatic art and drawing in Athens and fine arts at the École des Beaux-Arts in Paris.

The sculptures made of materials of everyday life, such as newspapers and aluminum cans, which are converted to the fabric as a new material used to create his unique sculpture art, which made him known internationally, establishing the style surrealistic pop-art. This method was invented and patented by Nikos Floros in 2003.

His works have been inspired by great personalities, such as Maria Callas, Princess Grace of Monaco, the Romanov family, and others. 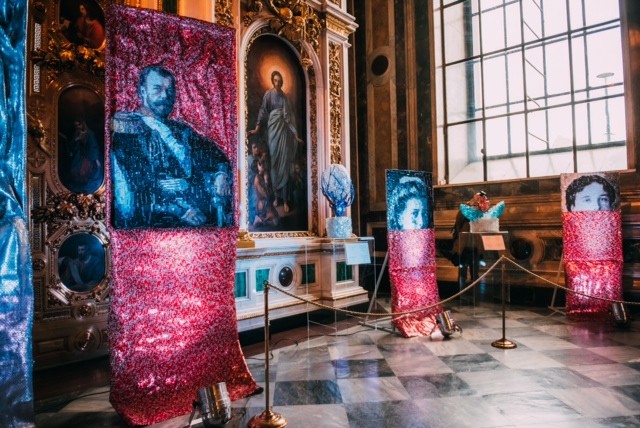 His work has received international acclaim and is covered by major news agencies such as Reuters, BBC, Sky News, ABC News, New York Times, Vogue, W, Associated Press, Fashion TV and many other news centers and television channels around the world.

Among other highlights was the hosting of a first-time Greek artist at the Museo del Greco in Toledo, Spain, and the fact that his art was selected by the Brazilian education system to be included in their teaching manuals. Still, he is the only artist invited to present his work dedicated to Princess Grace of Monaco at Monte Carlo, during the international tribute “Grace: Symbol of Change” under the auspices of Prince Albert II. 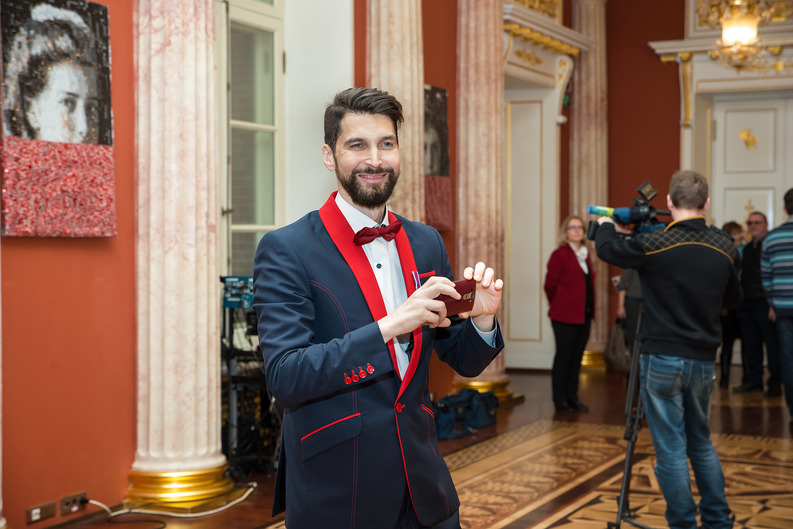 He was awarded by the Russian State, honored by the Lisbon Academy of Arts and Letters with a Gold Medal and is a member of the Academy as an Academician. He has also been awarded the Gold Medal of Arts and Sciences by the Albert Schweitzer Foundation in Vienna and has received the Global Thinkers Forum Excellence Award 2013 for the Excellence in Innovation.

He received the Grand Prize for the “Red Queen Elizabeth” given by the Metropolitan Museum of Art Costume and presented and presented by the curator Harold Koda of the Metropolitan Museum of Art Costume, as well as the corresponding award for the “Silver Elizabeth I” Costume by French Heritage Society at the Young Friends Heritage Society. 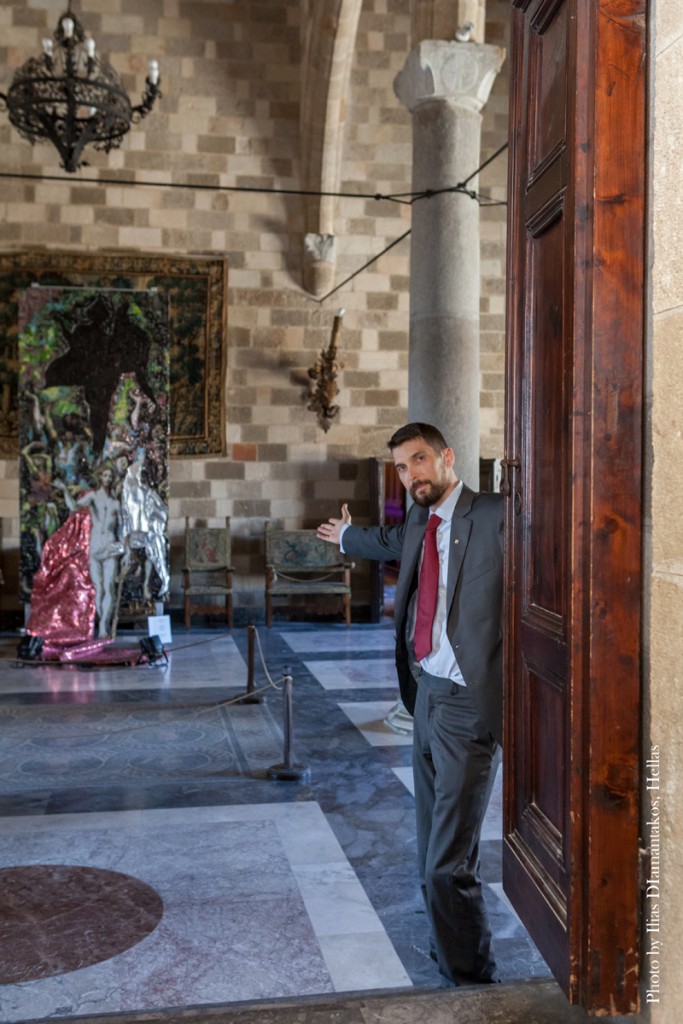 At the inauguration ceremony on June 8, the Greek artist was even honored with a prize for his contribution to the strengthening of cultural relations between the two countries by the director of the St. Isaac State Museum complex, Nikolai Burov. 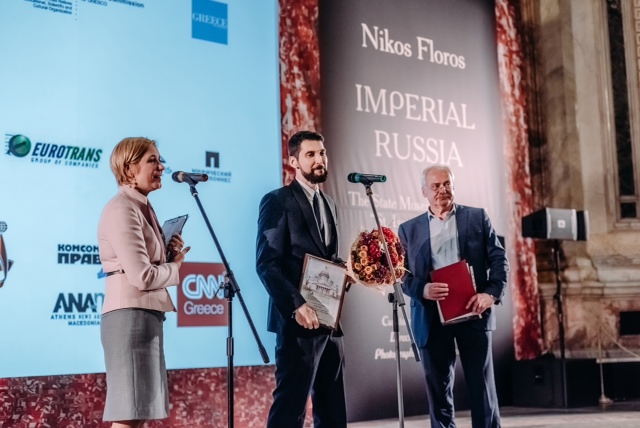 Mr. Burov said: “It is very important that this tribute is given from a perspective outside Russia, from Greece that we have very close ties, cultural, historical and religious. We are once again hosting the works of Nikos Floros, who is been loved by the Russian people. ”

In 2017, Moscow’s famous Tsaritsyno State Museum, one of the world’s most famous for its rare collections, opened its gates to host the unique works of the Greek artist, portraits of the last Tsarov Roman family. For the first time in the museum’s history, the Taurida Imperial Hall was opened in his honor. Between the golden Doric pillars and the crystalline Baccarat chandeliers, Nikos Floros managed to harmonize his contemporary art with 18th century Russian Empire. 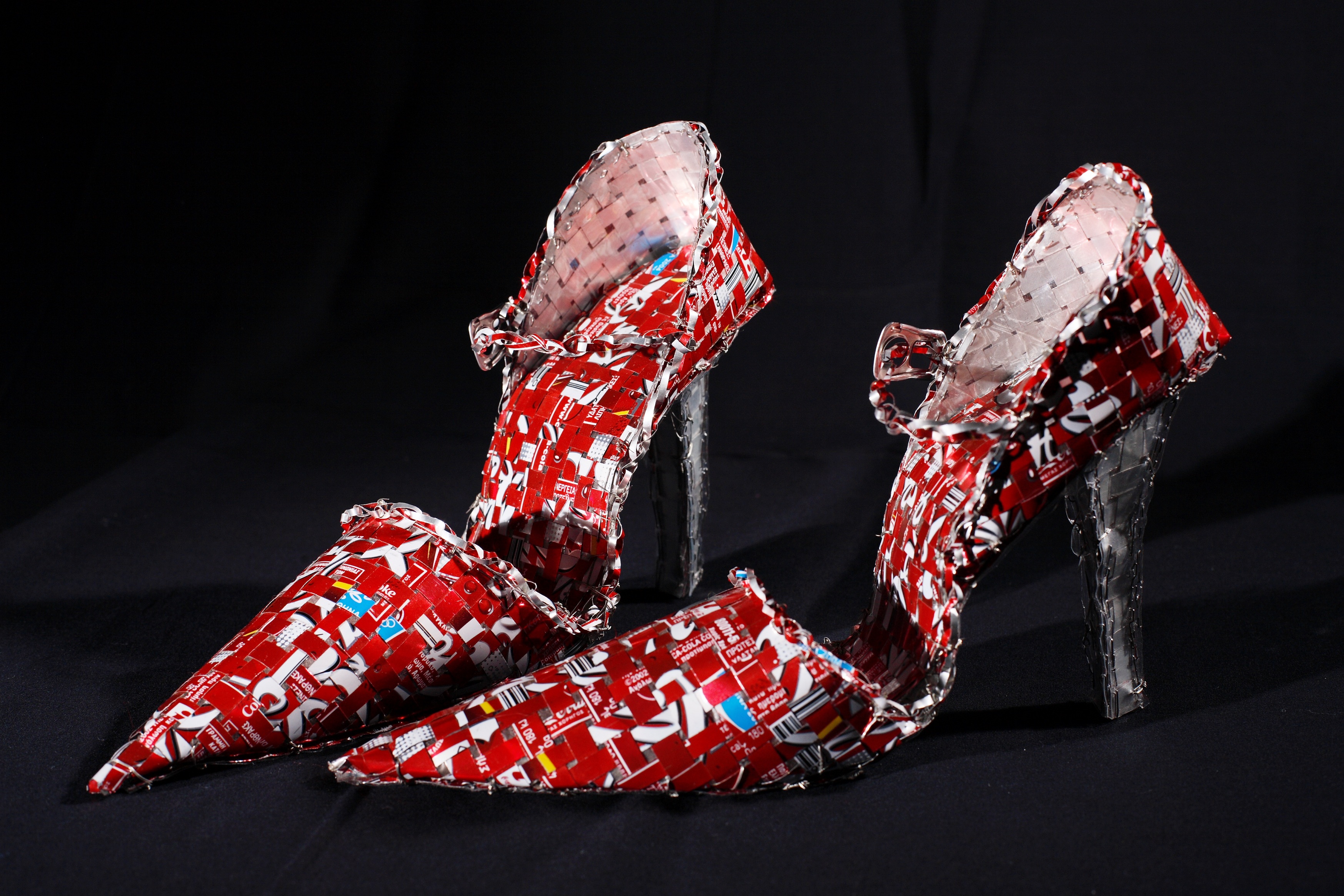 The same year, in the central hall of the Lisbon Geographical Society, the “metallic” look in the portraits of Maria Callas burst amid relics of Portuguese explorers from trips to Macau and Cape Verde. The Golden Fleece and the Argonauts in a mosaic form completed the Greek mission.

In 2019, at the ECOWaste 2019 World Environmental Management Exhibition, the creator of so many magnificent mosaic portraits reflecting the power and influence of these historical personalities, also presented his fully made 3,000 aluminum soft drink bin portrait of Mohamed Zayed Al Nahyan of Abu Dhabi and successor to the Throne. 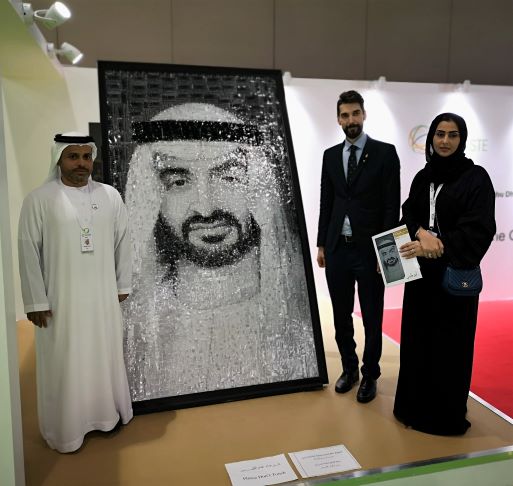 His portrait impressed the Royal Family and right after the presentation, he was immediately asked to move it at the Abu Dhabi Palace, where it will belong to the permanent collection. It was the first time the event featured an exhibition of works combining art with the environment, while his work was presented at the Abu Dhabi International Exhibition Center as an official guest of the United Arab Emirates Government, under the auspices of the Greek Embassy, ambassador Catherine Boura.

In 2019, his collection of works entitled “Maria Callas – Medea – Argonauts” was presented at the emblematic Museum of Wuppertal, Germany, at the invitation of the famous Pina Bausch Dance Theater. Indeed, the choreography of the performance was signed by the Greek dancer of Pina Bausch and one of the followers of her work, Daphne Kokkinos. 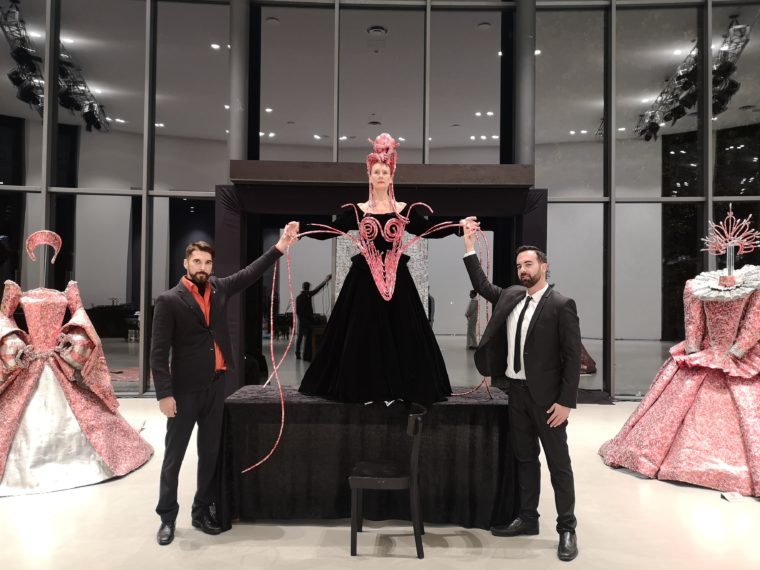 Photograph by Mantas Dusseldorf and courtesy of Niko Floros.

Mr. Floros and the exhibition by the Greek artist impressed the artistic audience as it was the first time that a combination of sculpture-dance and theater had taken place. The results of the success were the particularly positive criticism of the German media, and the wish-invitation of the Mayor of Düsseldorf, Thomas Geisel, to transfer the exhibition to his Town Hall, as he did, offering one more station on the exhibition route of Nikos Floros in Germany.

“The spaces where my works are presented,” he said, “are a great honor to me. These are places where modern art is usually not presented and I have the chance to get my work accepted. Personally I’m full and I’m not looking for the second part, which is the commercial one. Those museums are visited by a lot of people. I’ve always had a goal, to be able to express and many people around the world to see my work. ” His goal came true as, during the course of the 49-year-old artist’s career, it is estimated that millions of museum visitors have seen his works. 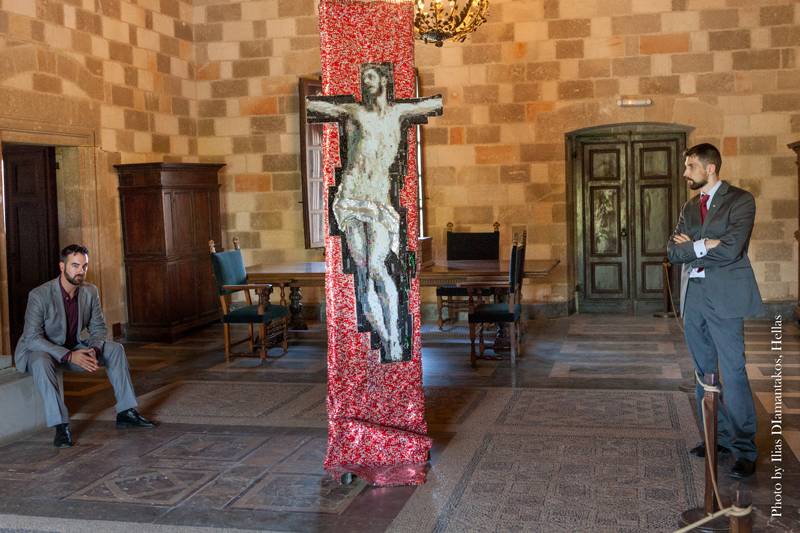 When asked how he ended up in sculpture, while in the past he had been involved with many other arts, he replies that sculpture is a very difficult art, because it is three-dimensional and requires physical force “especially my own works. In general, I like the challenge. ” He wants to transcend himself through his art and his purpose when creating is to find the limits of himself and if he can, through this process, become a better person. “I am not worried about the glory and money. Everything is fine, but it’s not an end in itself,” shares Nikos Floros.

The choice of aluminum for his art comes from his ideology that says that every era was characterized by its metal and aluminum is a material that characterizes today’s era. “I prefer to use aluminum from a consumer product, such as a soft drink can, that many people don’t value. Of course, for me, the material is not of great value. Material is the means by which I create my works. As I have said: “Art must go beyond the material from which it is made. And passing messages. ” 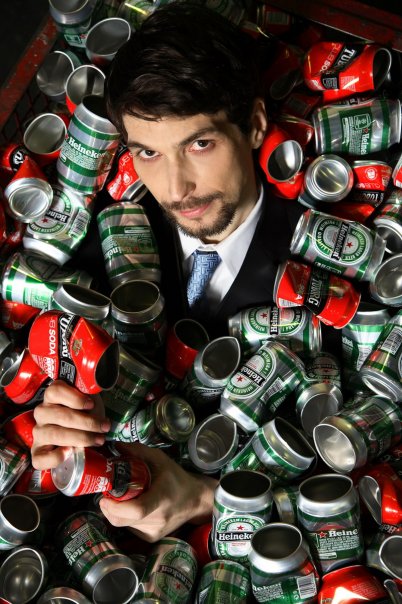 The message he is trying to convey is a projection of pulchritude, of beauty. “Not that my works are beautiful. What interests me is when someone sees a work of mine, to come a little closer to their higher self, to beauty. I don’t want to trouble them. I want to subconsciously convey the message of beauty and simplicity,” admits the artist.

For him, the messages of art should be timeless. “It must be quests that have to do with the eternal, that is, our love, our soul, our existential issues. Art should rest you and not tire you out. You have to leave and travel. Modern art has lost the game in this part. ” 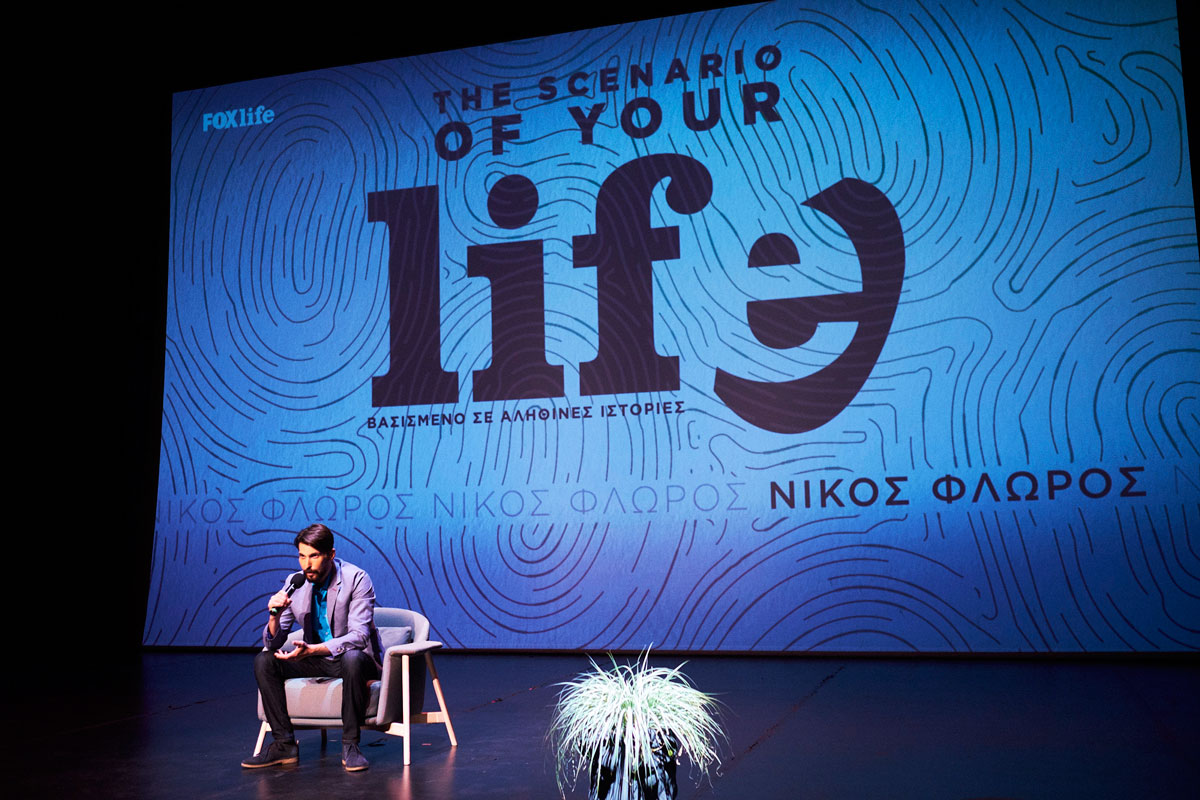 As the years go by, what he wants to leave behind is to have some people who have truly loved him in his life and to whom he had offered the same selfless love. This he believes is the greatest “price” one can get from life, as he says. “What you are weighing, when you leave this world, is how much love you have received and given to your life. Neither glory nor money, because they are all temporary. ”

Nikos Floros has demonstrated for many years, through his unique original art, the worldwide promotion of contemporary Greek Art by presenting it to the international art scene. 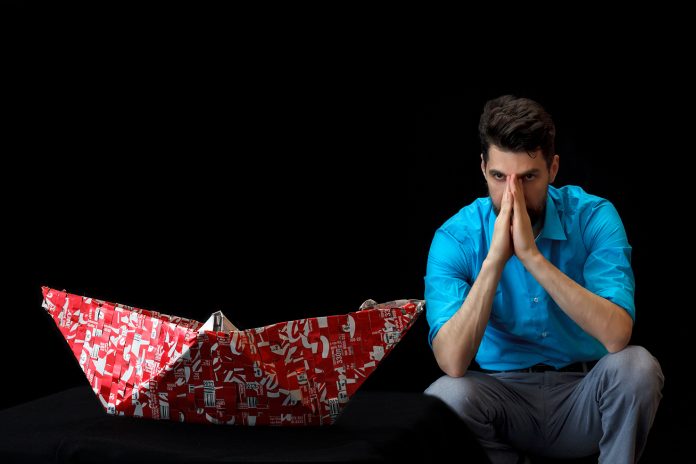 “I want my art to be the means for Greece to travel around the world, which is why me and my team bring the contemporary art of Greece to our stations all over the world. Very often, we feel the burden of this, as due to the economic crisis, our country often leaves culture behind. Thus, with personal sacrifices we carry out Greece has traveled everywhere”

In the immediate plans of the Greek artist is the creation of a Model Museum that will house the permanent collection of his pioneering works.