The incredible musician who plays Bach with a Cretan lyre

Yiorgos Kaloudis is a cellist, Cretan lyre performer, improviser, composer, cello professor at the Athenaeum Conservatory, in Athens, and producer at the DNA Classical Label. He performs his recitals “Innovating Tradition” and the “J.S.BACH: Cello Suites on the Cretan lyre, in concert halls, archaeological monuments, churches and museums around the world.

He was born in 1973, in Athens, by a musical family from Corfu and Crete. His first language of expression was music and he began to love the cello from the age of 6-7, with G.Mahler’s 5th Symphony being the trigger that made him make the final decision to start learning.

His classical studies of the cello were completed, with Claire Demeulenaere, at the Athenaeum Conservatory (Athens) where he graduated with honors. Shortly after, was awarded a scholarship by the Fulbright Foundation, providing him with the opportunity to continue his studies in Los Angeles under the tutelage of Ted Greene in composition and improvisation with the guidance of historical jazz teacher, Ted Greene, and James Mahlis.

In 2004, he discovered that some lyricists use cello strings in the lyre and wind them like the cello. This shocked him and he realized that when he held a lyre, he felt as if holding a small cello in his hands, “you don’t press the string but touch it with your nail instead,” he explains in an interview. “In a couple of days, whatever melodies I played in the cello, I started playing on the lyre. Reaching Bach and the 1st suite, suddenly a volcano erupted inside me! At that moment, I came up with the idea of making a four-string lyre in order to play this Bach project.”

Since then, the four-stringed Cretan lyre, with the innovative addition of a 4th string, entered the musical arsenal of Giorgos Kaloudis and he started using it in his professional life. But Bach remained a strictly personal affair. “I started studying suites for personal, “healing” reasons. As if I had found my own retreat to “cleanse” myself from any fatigue and stress. This story went on for seven years and only a few friends, very close to me, knew it.” 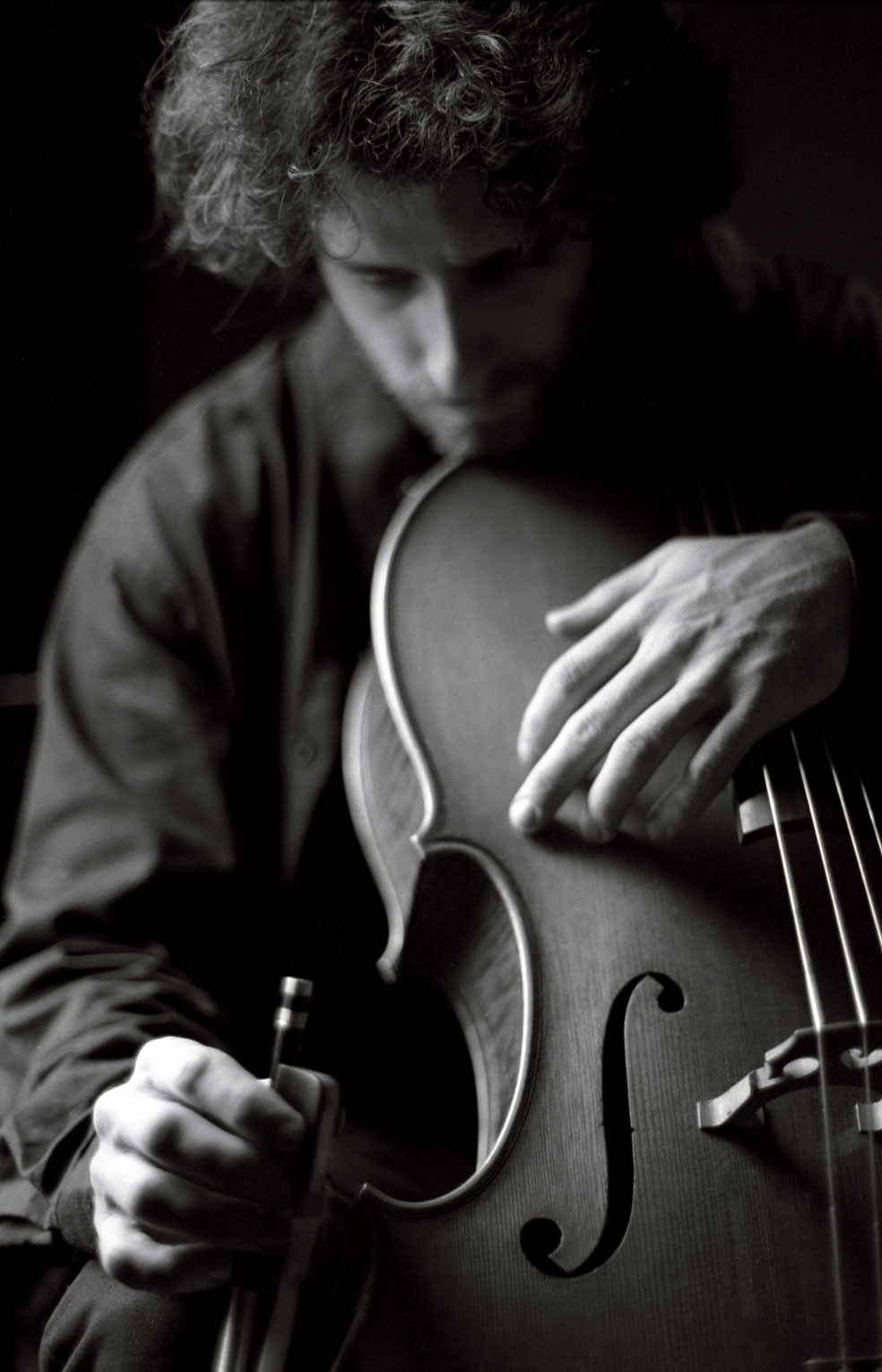 Until a concert in Aegina, with Maria Farantouri, Alkinoos Ioannidis and Dora Bakopoulou when the lyre and Bach came to the attention of the Maisky family – and of Mischa himself, one of the top cellists of our time, who listened Giorgos Kaloudis playing and said, “It’s as if the piece was meant to be played by a lyre. You have to record it because it does not belong to you anymore! It belongs to the world.” Following his hero’s encouragement, as of 2011, Giorgos Kaloudis began to work in the direction of interpreting and recording this Bach project for a Cretan lyre.

After thorough music research and the construction of a second lyre, especially for the recording, with a sound closer to that of Viola da Gamba, the project was completed in early 2017 and its first official presentation took place at the Concert Hall the same year.

“I have lived a long, 12-year journey exploring freedom, inspiration, spontaneous improvisation, truth and joy while studying and practicing all the Cello Suites. I have confidence in a strong instinct that guided me in the right direction, drawing on the music and the beauty of the instrument. The sound, the vibrations, the depth of the rich harmonics, the melodic lines, the strings and the sound maps of the creations of the Cretan lyre revealed a divine beauty, exposed through J.S. Bach’s work, which brings to my senses an ancient-quality sound and a precious silence of the Aegean,” the artist signed the album with those words

Yiorgos Kaloudis performs his compositions using the live-loop-recording technique. Since 2004, he has formed a unique duet with kanun player Ruth Hill where both artists perform his compositions using the different timbres of the cello, the lyre and the kanun to create instrumental soundscapes of particularly atmospheric ambiance, of classical, world and jazz music elements. He performed his compositions with the group “The Chosen” he formed with the bass-guitar player Sylvan Richardson and the kanun player Ruth Hill, at theManchester Jazz Festival in 2007. 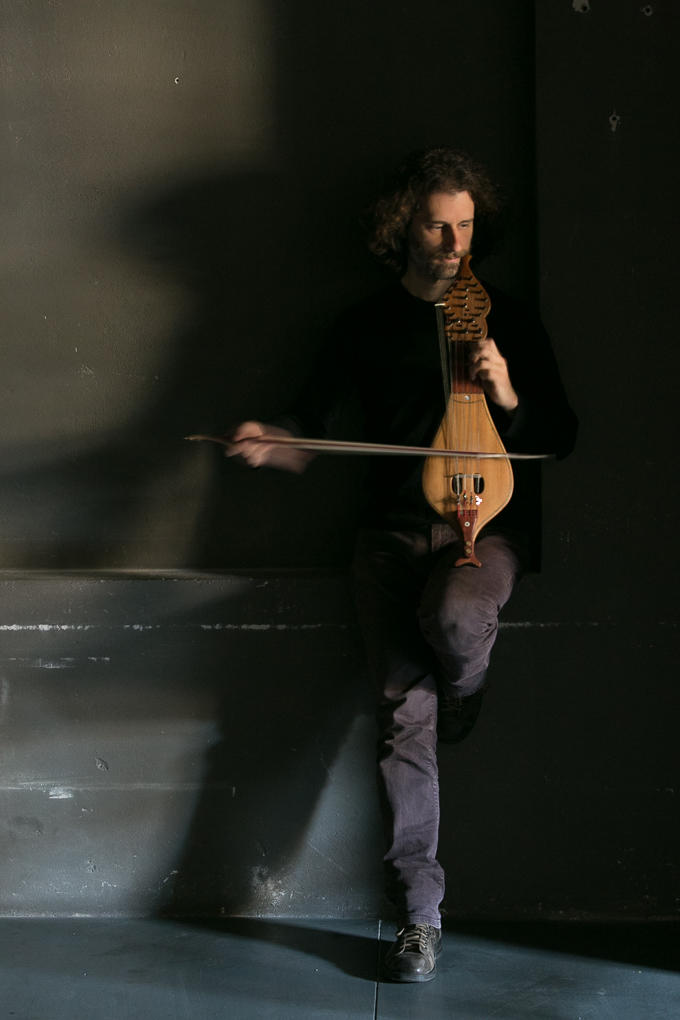 He has collaborated regularly since 2002 with songwriter Alkinoos Ioannidis, as a cello, Cretan lyre performer and improviser in various projects. In 2012 they formed a duet, which performs regularly in numerous venues, cathedrals, concert halls and collaborations with symphonic orchestras around the world, namely in England, Scotland, Wales, Russia, France, Germany, Austria, Belgium, Netherlands, Switzerland, Czech Republic, USA and Canada.

A decisive role in his professional career played “My Cello Teacher, Claire Demeleunaere, who taught me with love and faith. My acquaintance and collaboration with David Lynch since 1997. The scholarship for composition and improvisation in Los Angeles by FULBRIGHT Foundation in 2002. My acquaintance and cooperation with Alkinoos Ioannidis in 2002. The love and unbiased attitude of my Record,” he says.

His discography includes three albums with his own compositions, his debut with “Truth”, followed by “On the Wind” and “J.S.BACH: Cello Suites On The Cretan Lyra”. His latest record production was officially released in 2016 in digital form and by the end of 2017, in natural form, CD, by DNA Label Records, in the first world performance, which he worked by maintaining the original tonalities of the work, in deep respect for the tone color of the composer in attempting to avoid unnecessary changes in the music.

Two of the important elements of this record is that it is the first time that a Greek traditional instrument was interpreting classical music, as well as the peculiarity of the particular Cretan lyre that it had to make for the interpretation of the particular music. 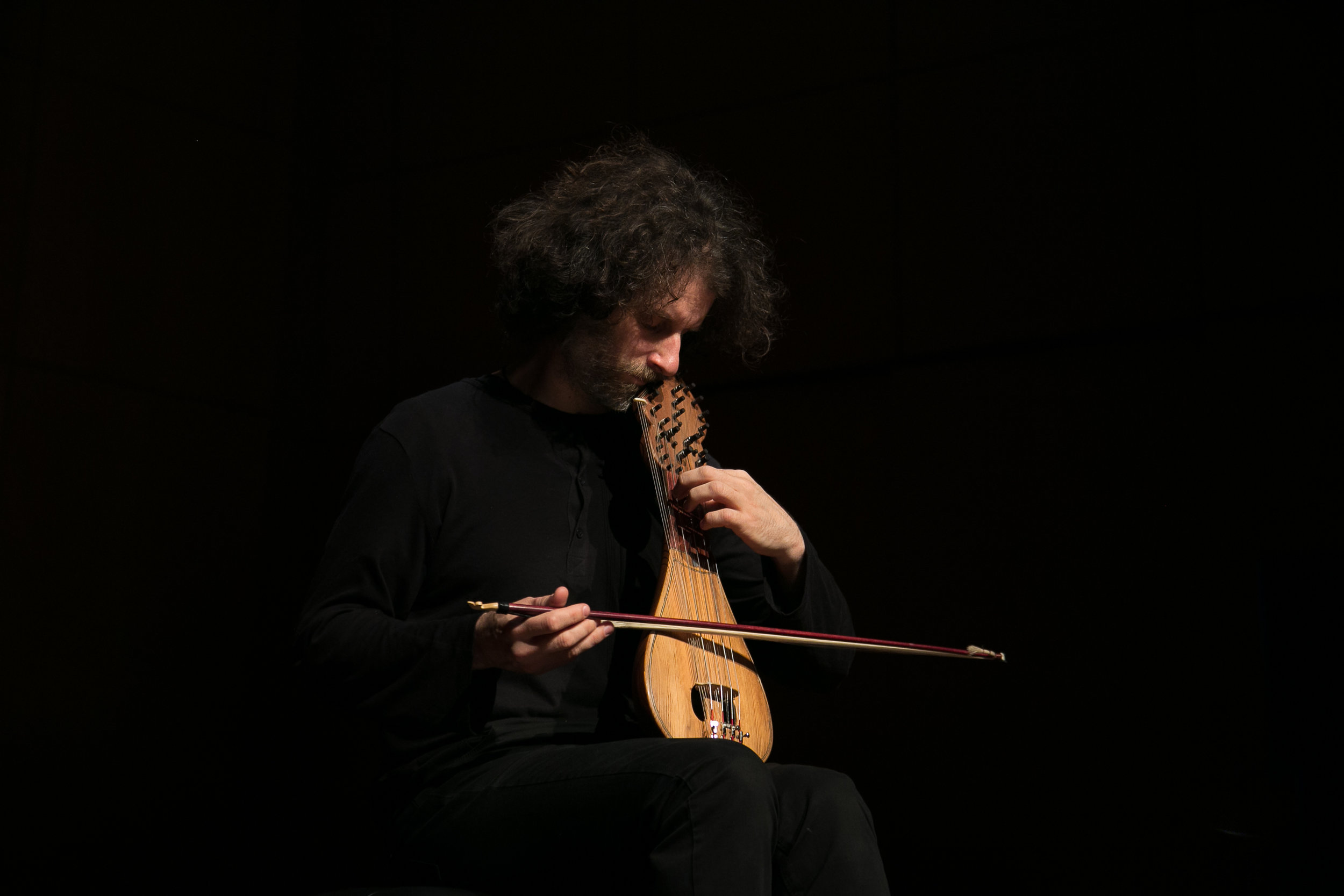 In September 2015, he was awarded the Special Jury Prize for the Best Musical Composition and Interpretation at the IV International Puppet Festival in Almaty Kazakhstan and the same year the recital “Innovating Tradition”, was presented at the opening of the New Archaeological Museum of Dion, by the occasion of the Ancient Hydraulis inauguration. In October 2016, he participated at Paris “Nuit Blanche” Festival by playing extracts from the album J.S. Bach Cello Suites on the Cretan lyre.

In August 2017, the Regional Union of Crete and the Ephorate of Antiquities of Chania invited him to give the premiere recital of the “Innovating Tradition” at the reopening of the Ancient Theatre of Aptera, in Chania, after more than 2000 years of silence, while in October 2017, he presented the recital “Innovating Tradition”, in Cyprus, at the archaeological Royal Manor House in Paphos. 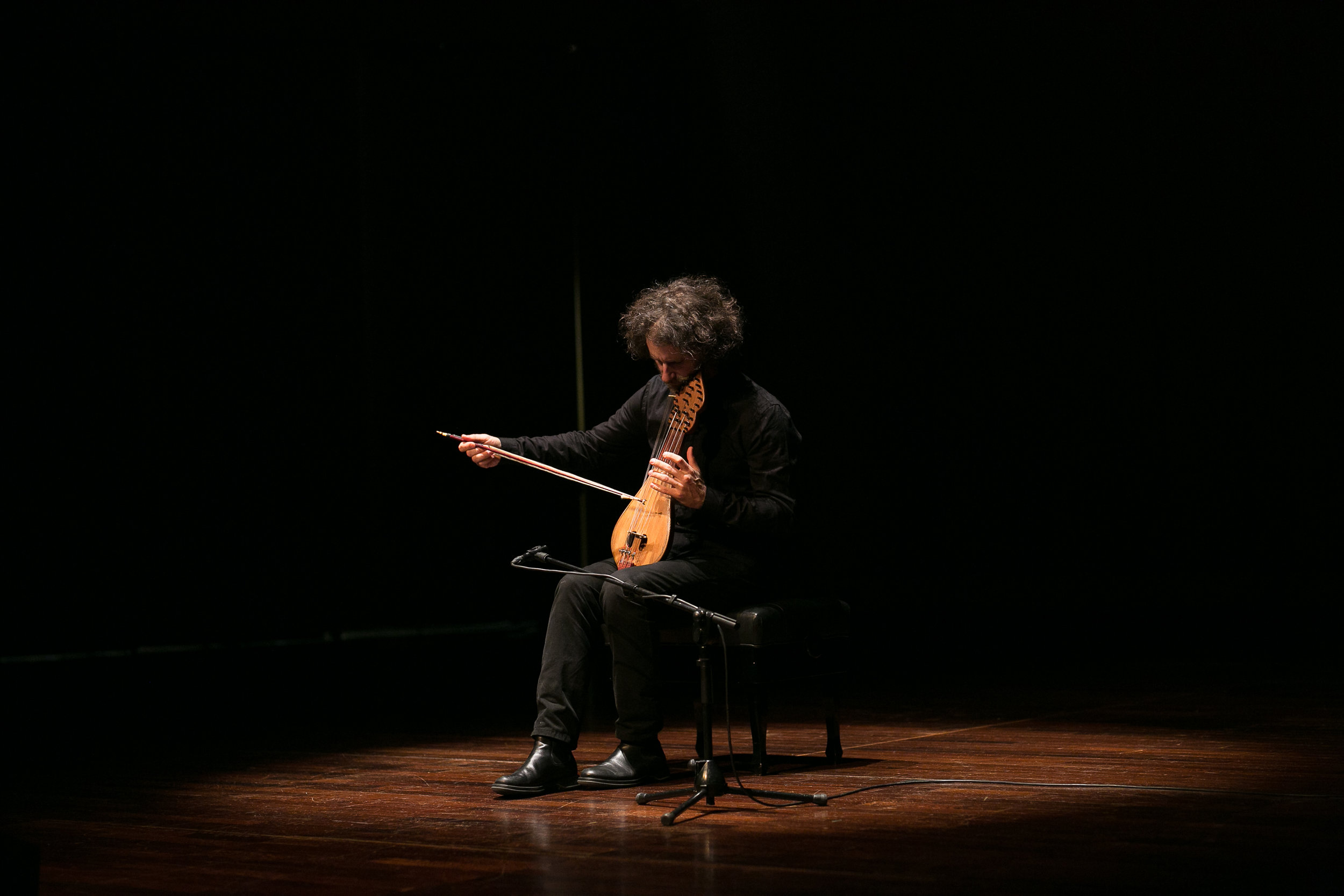 In November of 2018, the Regional Union of Crete in collaboration with the Embassy of France in Greece invited him to present the lecture of Y. Kaloudis with the title “Cretan Lyra in the Western European Music”, analyzing the 12 years of study and research upon the J.S.BACH Cello Suites on the Cretan Lyra. The composition “Orthi Petra (Necropolis)”, for 4-string Cretan lyre and cello, from the upcoming CD APTERA, will be surrounding the archaeological exhibition « Crete. Emerging cities: Aptera ― Eleutherna ― Knossos. Three ancient cities revived », at the Museum of Cycladic Art in Athens. (December 2018 – April 2019). 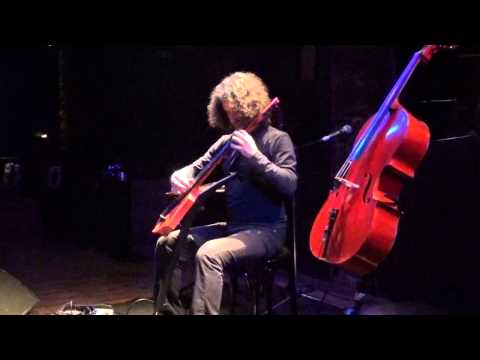