The “Lord” of the rings

Eleftherios Petrounias is a Greek artistic gymnast. He is the 2016 Olympic champion, the 2015 and 2017 World champion, and a four-time (2011/2015-17) European medalist on the still rings (three gold and one bronze). He has so far won more than 20 medals and more than 30 distinctions, not only nationally but also globally. He is characterized by many as the “Midas of the Rings” and a dominant figure of the sport, especially since the committee of the World Federation gave his name to an exercise in the rings, an exercise that Lefteris Petrounias performed at the European Championship in Sofia of Bulgaria, which was assessed with a degree of difficulty E (0.50 points).

He was born on 30 November 1990 and from a very early age, he joins the gym of Panionios. His coaches immediately understand that they have a promising athlete in front of them.

“I haven’t even understood how the games entered my life. I was too young when I started practicing. A nervous boy with so much appetite and energy. It was like I was in a giant park.” Petrounias says.

In 2000, in Saronikos, he earns 7 medals in gymnastics. By 2004 as he states, his life was school-gym-home. By the age of 14, he decides to quit because of exhaustion. In 2008, he decides to start again and he is more confident than ever to continue with this career.

On the World Cup Gymnastics at Cottbus in Germany, he wins the silver medal and the bronze medal at the European Championship at 9th of April.

On the 4th of September, he earns three consecutive gold medals in World Cup Gymnastics. First in Ghent, then in Maribor, Slovenia and the third in Ostrava, Czech.

In 2012, Petrounias decides to focus on the rings and in the same year FIG world ranks him as No1. and the same happened in 2013.

“I am a gymnastics athlete. But my true love is the rings. I grow up watching my idol Tampakos. I was always ahead of my age with the exercises I did”

On 24th of June 2014, Petrounias earns the gold medal at the Mediterranean Games and at the World Championship at Nanning, China earns the 6th spot.

The world committee on February of 2015, gives the name of Eleftherios Petrounias to a specific exercise he performed during the European Championship at Sofia, Bulgaria.

On the 2015 European Championship of Montpellier in France, Petrounias earns the gold medal and the second gold medal comes at the Grand Prix in Hungary with 16.200 points which is his best performance of his career.

On 31 October 2015, Eleftherios Petrounias becomes the World Champion on the rings at Glasgow with 15.800 points and secures a place in the upcoming Rio de Janeiro 2016 Olympic Games. When asked how he felt when he won: “ Proud that I am a Greek. Proud of the work we did with my coach and my sponsor. Relieved that I proved all the work I did all these years. I hardly celebrate but this time I knew I won the moment I landed on the ground”.

Petrounias was the first torchbearer for the Olympic torch relay after the flame was ignited at Olympia on 21 April 2016. At the 2016 Summer Olympics in Rio de Janeiro, he qualified for the rings final in second place with a score of 15.833. On August 15, 2016, he won the gold medal in this event with a score of 16.000, 0.234 points higher than the silver medal winner, Arthur Zanetti of Brazil. His gold medal was Greece’s first medal in the rings since Dimosthenis Tampakos won gold at the 2004 Summer Olympics.

Lefteris Petrounias won gold at the World Gymnastics Championships in Montreal on Saturday 7 October 2017 to become only the ninth gymnast to win back-to-back Worlds golds in the rings. He scored 15.433 points after an excellent performance of his routine, with his closest rival Russia’s Denis Abliazin coming second with 15.333 points.

in 2018, the Greek athlete won the gold medal in the rings at the World Cup organized by Baku at 15,333 points and the 8th consecutive gold medal he had won in the last 22 months. Also, in August of the same year, Petrounias became a European champion for the 4th consecutive year with 15,466 points in the final of the European Championship in Glasgow, equaling the Italian Yuri Kaki’s record. 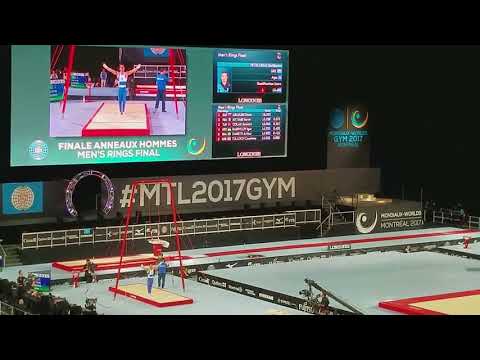