One of the strongest entrepreneurs in the world

George Logothetis is the Chairman and CEO of Libra Group. He is based in New York and has principal executive responsibility for the Libra Group. In 2014 Fortune Magazine named him one of its “40 under 40”.  The Libra Group is a diversified international privately owned conglomerate company. As of 2017, the Libra Group owns and operates 30 subsidiary companies around the world, mainly in six separate industries: aviation leasing, renewable energy, hotels and hospitality services, real estate, financial services and diversified investments, and shipping.

George Logothetis was born in 1975 in London to Greek-born parents, and he grew up there. His father is from Kimolos and his mother from Chios. He is the eldest of four sons of Greek shipping businessman Michael G. Logothetis, and his brothers are Constantine, Nicholas, and Leon. His father started a small shipping business, Lomar Shipping, in 1976. George was exposed to the business from a very early age, and as a teenager he also spent summers abroad learning the details of the trade.

“I remember many discussions with my father all the time, at the gas station, on holiday. He used to bring the telegrams and the faxes – or telex as it was back then – back home. He used to teach me. It was very much part of our blood, part of our culture as a family.”

As a very young child he contracted meningitis, a disease which threatened his life and thereafter created debilitating health problems. In 2011, when he was 36 years old he had an operation which cured the φcondition. He has stated that living with a compromised immune system for so long gave him an enormous appreciation of life and an ability to find inspiration in the face of difficulties.

In 1993 George joined Lomar Shipping, the Logothetis family’s London-based shipping company. In 1994 at the age of 19 he was appointed CEO. He spearheaded Lomar’s evolution from a three vessel fleet to a modern and diversified 55-vessel fleet before becoming the founding Chairman and CEO of the Libra Group when it was formed in 2003. As Chairman and CEO, George has led the group’s transformation from a shipping company to a diverse multinational and multicultural international business group.

“When I started working at 18 I said to myself that I would work like crazy for five years, but every five years I would take some time off to reflect about the next five years.” When he’s on sabbatical, he cuts himself off completely from work emails and phone calls.

“Ideas need space to be born. In today’s world of a thousand emails and constant information being pumped into you, there’s something very inspiring about being cut off for a certain amount of time,” he says.

“Libra is a family business and, therefore, we remain faithful to family values, but at the same time we encourage diversity and initiative. Each of the 30 companies in the Libra Group enjoys a considerable degree of autonomy. We believe that experience and deep knowledge of local conditions contribute to informed investment decisions and ensure operational efficiency. We are more proud about how we’ve built, as opposed to what we’ve built, because we have built it on the basis of traditional Greek family values.” George Logothetis explained.

Mr. Logothetis’ activity is also intense in tourism. With two brands, initially Grace Hotels and then the Aria Hotels, the group is steadily grows in the hotel industry, where it began operations 13 years ago. The beginning was made in 2004, from North America, with the acquisition of a range of hotels, restaurants and marinas on the Maine and Vermont coasts. Aria Hotels is the upcoming subsidiary of the Libra Group with boutique hotels and villas in the Greek islands and Mainland Greece.

“Many heroes are born and shaped from crises… There are many Greek heroes that are unseen, unheard and unappreciated. There are legions of heroes out there fighting every hour of every day, but they are not seen or heard. They are the heroic Greeks, not the lazy Greeks” said George Logothetis at the Concordia Europe Summit in Athens.

Logothetis and his wife Nitzia (née Embiricos) are based in Manhattan, and have two sons and a daughter. 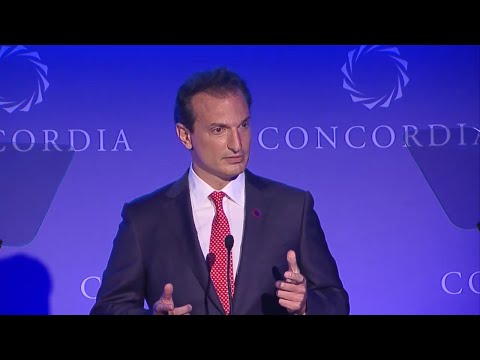