Paul Vittoroulis is a veteran war correspondent and Managing Director at “Forever Living Products” for Greece and Cyprus. The company was founded in 1978 in Scottsdale, Arizona. It is the largest company that produces and distributes hundreds of health and beauty products based on Aloe Vera all over the world. It is located in 168 countries and has turnover of around $ 3 billion a year.

Paul Vittoroulis was born and raised in Karpathos, Greece. In the early 1960s when he was 17 years old, he saved some money and decided to go to Canada with his 15-year-old brother. There he attended night school while working at restaurants. In Canada he made his first steps as a professional videographer.

From 1970 to 1995, he worked as a cameraman for CBS. He was a war correspondent and he recorded with his camera historical moments all over the world, where he also met great personalities.

One of the most important moments in his career was that he helped save the crew of the Pivot tanker, which was attacked by an Iranian frigate firing rockets in the Persian Gulf and for that he received the “Sigma Delta Chi” award for excellence in Journalism. He was an eyewitness of the events during the Athens Polytechnic uprising in 1973. He recorded the Yom Kippur War also known as the 1973 Arab–Israeli War, as well as the Lebanese Civil War. Ηe was honoured with the News & Documentary Emmy Award for covering the bombing of Beirut.
For 96 days, he had been covering the American hostages’ crisis in the US embassy in Tehran and he was the first to bring the news that the hostages were finally free in January 1981. He was also at the center of the Turkish invasion in Cyprus in July 1974.

He photographed American planes bombing Libya’s Tripoli in 1986. He recorded with his camera the long-term Iran-Iraq war as well as the armed clashes between Pakistan and India. He also filmed secretly the first elections in Czechoslovakia in 1971. Some of the most important moments of his career were material for Hollywood films, such as “Insider” directed by Michael Mann starring Al Pacino and Russell Crowe, as well as “Argo” which has won three Oscars, directed by Ben Affleck.

Paul Vittoroulis was also an eyewitness to humanitarian disasters such as the famine in Ethiopia. He is the author of the book “Camera Belli”, which contains his shocking personal experiences. All proceeds from the sale of the book will be made available to Forever Living Products, which supports children around the world by organizing and participating in food solidarity programs, medical assistance, education, housing, clothing, as well as relieving illnesses.

“During my long and multidimensional career, I have often faced danger, fear and injustice. But nothing has shocked me and continues to shock me, as much as the injustice towards children who, simply because they were born at one place or another on the planet, are innocent victims of exploitation and subjected to daily torture, pain and misery”, Paul Vittoroulis has said. 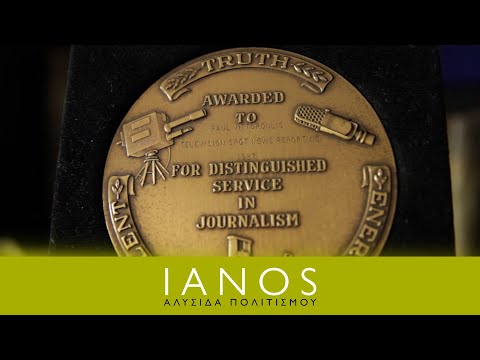