The “father” of time

Demetrios Matsakis is the Head of the Department of Time Services in the United State’s Naval Observatory since 1997.

He was born in Missouri, USA and comes from the greek island of Carpathos. His father, Nikos was a dentist, who during the Second World War, did his military service in the sanitary department of the US Airforce, and became major.

His is also known as “Father of time” or “Time Lord”, since he is responsible for the Master Clock,  is a precision clock that provides timing signals to synchronise “slave clocks” as part of a clock network.

“Master clock is based on the accurate function of about a hundred atomic clocks, that count time, and which in fact are so accurate, that are bound not to lose even one second in the next 300 billion years!”, says Dr. Matsakis.

During Matsakis’s service, Master clock stopped working three times. Two of those times, he was inside an airplane, and the third time he was on his way to his son’s (Nikos) marriage. But it was immediately fixed by his partners, who followed his written directons step by step. In about ten years from now the whole system is going to be upgraded and enriched with new clocks, which are already being manufactured by his team, not only inside his lab, but also in similar labs in Paris, Russia and Braunschweig, in Germany.

As a child, he wanted to become an astronomer, because of all the astronomy books his mothers used to buy for him. Not only did he become one, but he also became the President of the International Time Commission of the International Astronomical Union, from 2003 to 2006.

He studied the fundamental particles of Physics in MIT, Boston, and then went to Berkeley, California, where he studied astronomy, next to the American physicist Charles H. Townes, who in 1964 shared the Nobel Prize in Physics, for inventing the laser device.

At the same time, Dr. Matsakis became known for inventing a new form of methanol in Orion’s nebula. After his graduation, he specialized in radioastronomy, counting the oscillations of the Earth during its rotation, and studying quasars (extremely bright masses of energy and light) near the edge of the universe. He later on started to become more and more interested in timing with atomic clocks and pulsars.

Matsakis’s interaction with time began, naturally, with an attempt to fix a clock. He arrived at the USNO in 1979 to work as a radio astronomer, measuring the rotation of the Earth. In 1990, a new clock came in, an experimental, mercury-based one, and promptly started to malfunction. Matsakis was the only physicist on the premises, so his supervisor asked him to fix it.

“In a way, practically speaking, we have figured out everything, but in another way, we are completely ignorant…There are people that say that ime could stop, that time could have a beginning, that time is a quantity that derives from somewhere, not a fundamental quantity. All these are questions in which I cannot answer. It’s like the example of a doctor who know what to do to keep a man alive, but doesn’t know what life is. I know how to calculate seconds. This is what I do”, says Matsakis.

“People who have retired tell me this,” says Matsakis. “You don’t realize while you’re here, but you’re always afraid of losing time. It’s always in the background. It must be like living in California and always worrying a little about an earthquake. When they retire, they finally feel relaxed. I suspect I’ll be the same.” 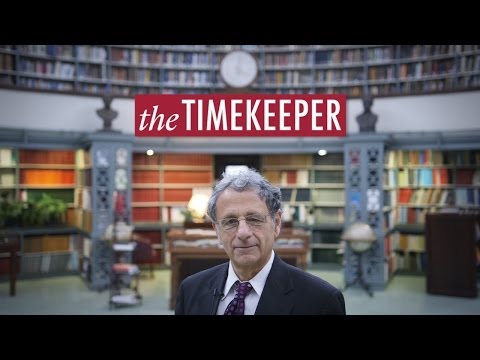