The Greek “father” of selfies

Lonesome, eccentric, visionary…that is how his fellow artists describe him. Lukas Samaras is an artist than cannot be classified in any category, norm or trend. He creates, he provokes, he surprises. He is well known for his self-portraits printed in polaroid film, which he later on processes and shapes, the “photo-transformations”, as he calls them. He interviews himself, he photographs himself, he becomes a sculpture. It doesn’t have to do with narcissism, it’s about exploring himself, converting his image and idol, as he well describes in his exhibition “Unrepentant Ego”.

Lukas Samaras was born in Kastoria, Greece, in 1936. In the age of eleven, he migrated with his mother in New York in order to meet his father, who was already there. Alone in a foreign country, he observed foreing people with whom he could not communicate, since his english was very poor. This urged him to express himself mostly through painting. He was a natural talent, and this was proven when in 1955 he studied at Rutgers University on a scholarship, where he met Allan Kaprow and George Segal. After graduating, Lucas Samaras was awarded another scholarship for his masters in Columbia University, in the field of art history. This was the period when the artist would interact with the New York underground scene. In 1961, Lucas’ wanderings in the paths of art would lead him in New York’s famed Stella Adler Conservatory for Acting.

Before committing to photography Samaras has previously tried his luck with painting, sculpture and art perfomance. His first exhibition took place in 1959, and two years later one of his projects was bought by the Museum of Modern Art. During his career, Samaras worked on paintings, sculptures, installations, photographs, furniture and jewellery. He used several materials in a very innovative way, and discovered that wet dyes of Polaroid prints were highly malleable, allowing him to create what he calls “Photo-Transformations.” In the last years, Lucas Samaras creates art, and with the help of drawing programs he combines photography with virtual reality. Part of the technological evolution of his work is the production of short films with pictures and music, the so called “Photo-movies”.

In 1986, he was awarded with the Infinity Award for Art. He has represented America through his work in international exhibitions of modern art, and in 2009, Lucas Samaras was chosen by the Ministry of Culture to represent Greece at the 53rd International Art Exhibition “La Biennale di Venezia”. His work is hosted by some of the most important museums of Modern Art, such as the Getty Museum and the Los Angeles Museum of Modern Art, the Australian National Gallery in Canberra, the National Gallery, the Smithsonian American Art Museum in Washington and Tate Gallery in London. Lucas Samaras is undoubtedly one of the most important representatives of the post war modern art, ever to influence this much the so called contemporary art. 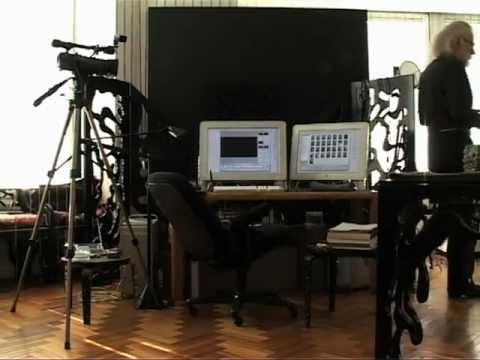