He changes the world of Computer Science

Joseph Sifakis is a computer scientist and researcher, laureate of the 2007 Turing Award, along with Edmund M. Clarke and Ernest Allen Emerson for his work on model checking, a verification method of computer hardware and software properties. The Turing Award is recognized as the Nobel Prize of Computing.

Sifakis was born in Heraklion, Crete, on December 26th, 1946 and later studied Electrical Engineering at the Technical University of Athens and Computer Science at the University of Grenoble under a French scholarship. During his studies in France, he acquired the French citizenship and has since been living and working in the country.

VERIMAG Laboratory is a leading research laboratory in the area of critical embedded systems. It developed the underlying theory and technology for the SCADE tool, used by Airbus for the design and validation of its critical real-time systems, and is becoming a de facto standard for aeronautics.

Verimag has a lasting and strategic collaboration with ST Microelectronics, France Telecom R&D and Airbus, through which numerous results on validation and testing have been transferred.

Joseph Sifakis is recognized for his pioneering work on both theoretical and practical aspects of Concurrent Systems Specification and Verification. He contributed to emergence of the area of model-checking, currently the most widely-used method for the verification of industrial applications. His current research activities include component-based design, modeling, and analysis of real-time systems with focus on correct-by-construction techniques.

Moreover, he’s the Scientific Coordinator of the European Network of Excellence ARTIST2 on Embedded Systems Design. This network gathers 35 of the best European teams in the area, and aims to produce innovative products.

The French state honoured Sifakis with the titles of Grand Officer of the French National Order of Merit and Commander of France’s Legion of Honour. In 2009, Sifakis received the Greek Parliament Foundation for Parliamentarism and Democracy Award and in 2012 he was further honoured with the Leonardo Da Vinci Medal.

Quotes from the exclusive interview to ellines.com
«We are a generation that had visions. Most of us wanted to become scientists, we had ideals. At that time, science had another glamor and I wanted to be a researcher since childhood. Between ’64 – ’69 I was in the Technical University of Athens. Those years were difficult and my dream was to go abroad. I accomplished it a year later and I went to France. Initially, I went to study physics, but there I met Informatics. The machines that we had at the time were approaching the behavior of the human mind, they were smart machines and this charmed me!».
«I had to work hard, like most Greeks fleeing abroad. What I must acknowledge is that the French system, like other systems abroad, recognize people who work hard and give them a proper place in it. In Greece there are difficulties  to recognize the value of someones work and no merit».
«In Greece we have competent researchers. The level of research is quite high and comparable to the research done in Europe. What is missing is the link between research and the real economy. That is a disadvantage to Greece».
«We have to fight to get something done in Greece, because it is our last chance. I’m optimistic, I know that there are obstacles, but I also know that many people in Greece are waiting for something to be done to get out of this impasse. We must modernize our economy. The modernization passes through the vision of innovation. Greece has the skills to succeed».
Watch video interview of Joseph Sifakis to ellines.com 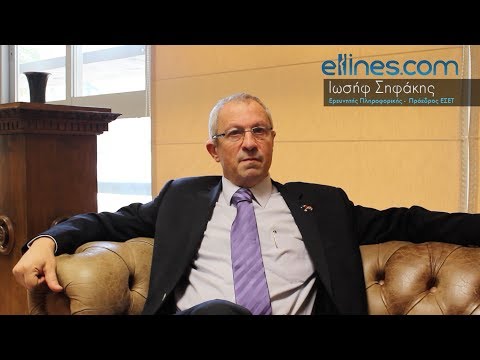