The unique and famous Grey Mullet Bottarga of the world

The four generations, award-winning family business Trikalinos, with faith in tradition and vision for tomorrow, innovates producing quality superior products of high nutritional value. Among other things, the Grey Mullet Bottarga has a balanced, fine taste and long aftertaste that retains its original nutritional value without additives and preservatives. 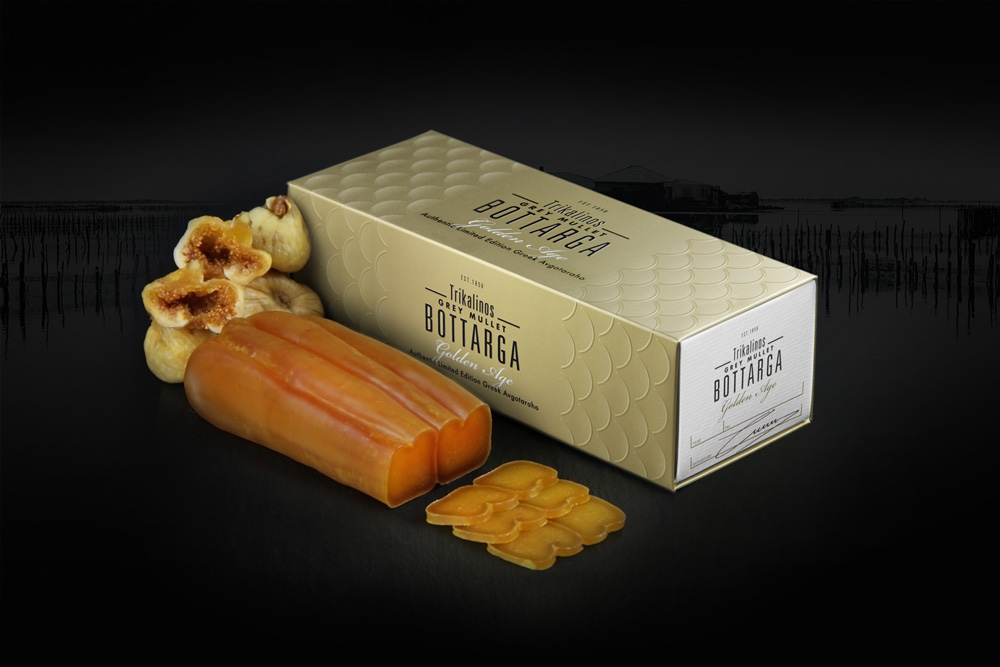 In 1856, in Aetoliko, over a century and a half ago, the Grey Mullet Bottarga was well-known, and a lot of boats traveled and fished mullets. So it was logical for the three Trikalinos brothers to dive into the waters of Aetoliko and create the first Grey Mullet Bottarga with their signature. They agreed to use the most qualitative raw material, the cow eggs, and aim at the highest gastronomic experience for anyone who tastes their own Grey Mullet Bottarga.

Based on these principles, the Trikalinos heirs received the family passion and developed it into one of the most gastronomic dishes of our time. After George Trikalinos, his son, Zapheiris, and his son, Zafeiris Trikalinos Jr., who is the fourth generation and he already trains the fifth one in order to take over the business. 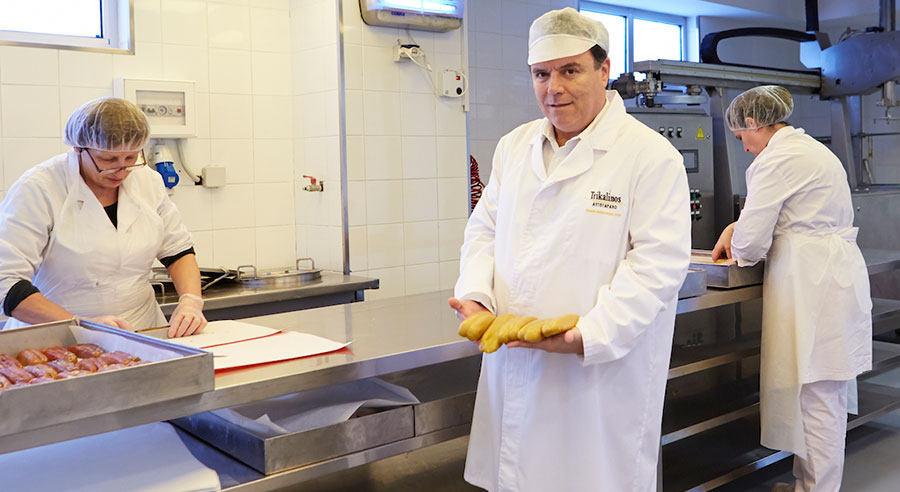 Since 1997, the company has established the first certified Grey Mullet Bottarga facilities in Greece with its own fund. All traditional production methods are “bound” under constant and strictly controlled processes that ensure the consistent quality of all Trikalinos products and guarantee that they are produced in certified hygiene conditions.

Until the current administration of the company, the Grey Mullet Bottarga was known as dried, salted food. In the modern era, however, the right questions started being asked, such as why was it dry or salty, what each one offered and what it didn’t, ending up with the utilization of Greek scientists and Greek universities for research. 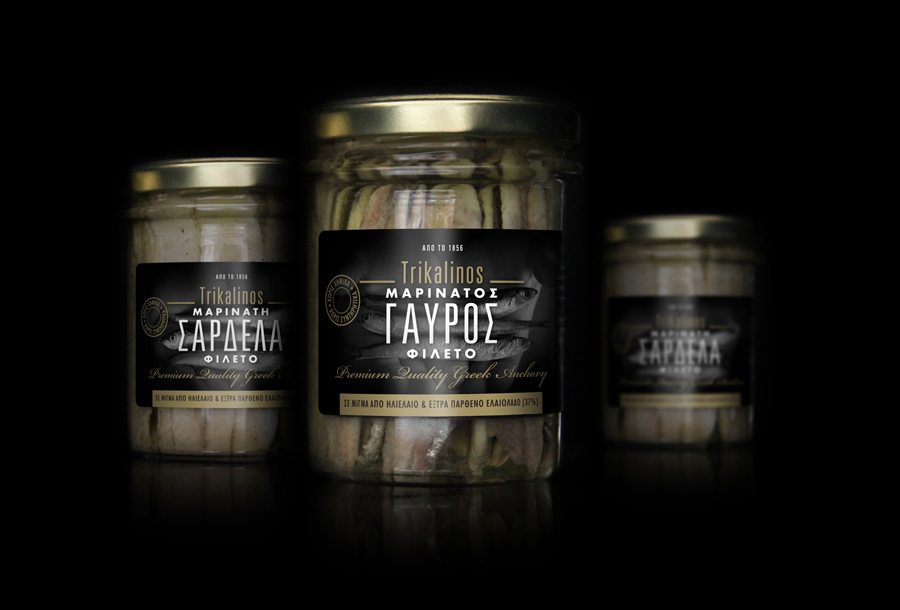 In other words, the company dared to redefine an almost forgotten traditional Greek treasure and to upgrade a product that until a few years ago was known commercially at a limited local level, not very tasty, and nutritionally it was a forbidden food for those with cardiovascular diseases and hypertension. Nowadays, the Grey Mullet Bottarga that it creates does not look like any other product that is being produced in the world and in Greece. Its salinity is low – as the salt of the sea is actually trapped – it is soft on the inside, honey-colored, not dried and unsalted.

The Trikalinos Grey Mullet Bottarga is derived from mullets fished in the Ionian Sea, aiming at the best raw material and the guarantee of a high-quality product. The production process involves removing whole ovaries from the fish, rinsing with water, salting with natural salt and drying under the sun. The packaging is made in natural melted beeswax so that the taste and nutritional value of the Grey Mullet Bottarga are kept intact throughout its lifetime. This process ensures a low salt content (1%) and a high level of moisture to keep its seafood juices while keeping sodium levels low. 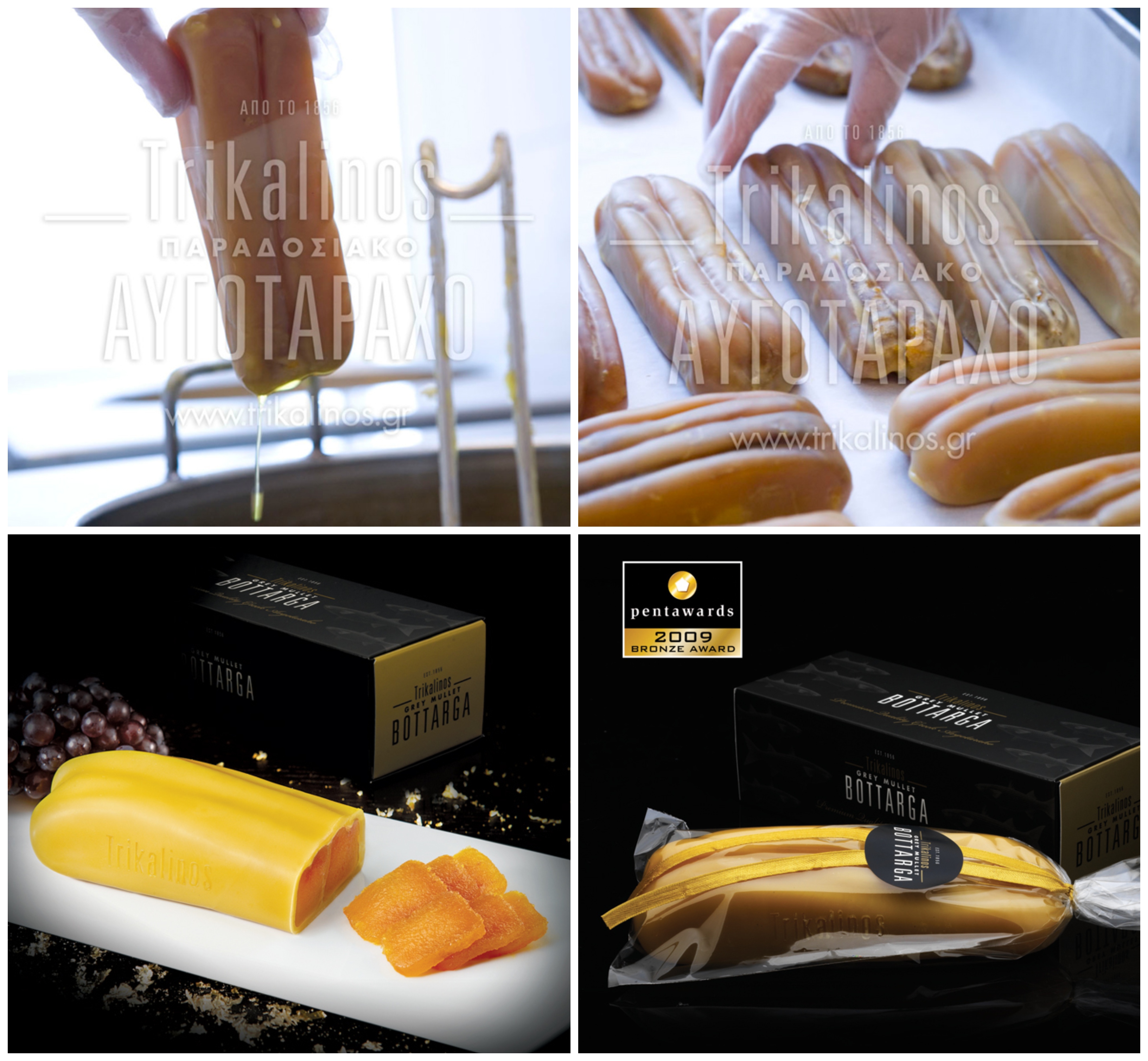 Trikalinos products are exported to Europe, America and Asia, in more than 35 countries, building steadily Trikalinos Brand as a synonym for a range of Premium products with its best assets being flavors and health. Now, more than 50% of sales come from foreign markets. 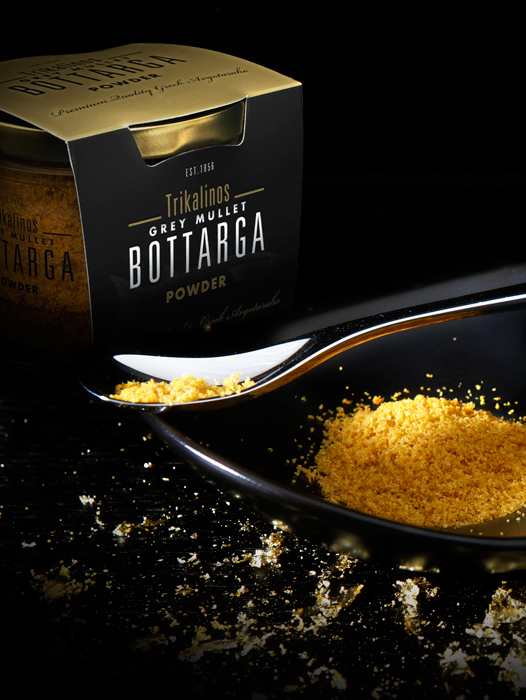 The company maintains contracts and offers products to selected stores in the USA (Portland and Illinois), Singapore, the UK and Ireland, and Germany. Also, the products can be tasted in restaurants in Taiwan, Sweden, Spain, Russia and America. Of course, Trikalinos products are found in major food-grocery stores throughout the country, in Delicatessen and Duty-Free in airports.

An important moment for the company was in 2009 when top Chef Ferran Adria presented the Trikalinos Grey Mullet Bottarga in El Bulli, the most imaginative generator of haute cuisine on the planet, according to The Guardians. In fact, Ferran Adria, in 2010, included it in the 30 best and healthiest foods in the world, in the book “Fragile Feast”. 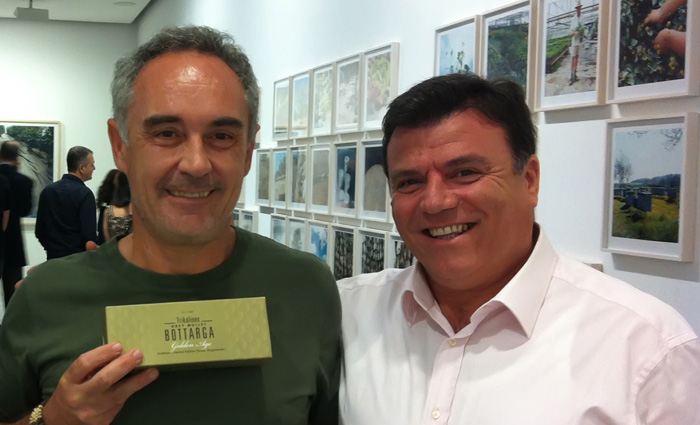 Among the great chefs of the planet and the impeccable restaurants, which are among the first best in the world, to use the products Trikalinos, is also the No. 2 restaurant of the Roca brothers. In 2014, their top restaurant, El Celler de Can Rocas in Spain, introduced a dish dedicated to Trikalinos Grey Mullet Bottarga, with marinated mackerel, anchovies, capers and pickles.

The products of the Greek company have been presented to the US Congress and have been privileged to be selected as one of the top dishes served at the Presidential Palace during the official visit of Prince Charles of Wales and Duchess of Cornwall Camila. 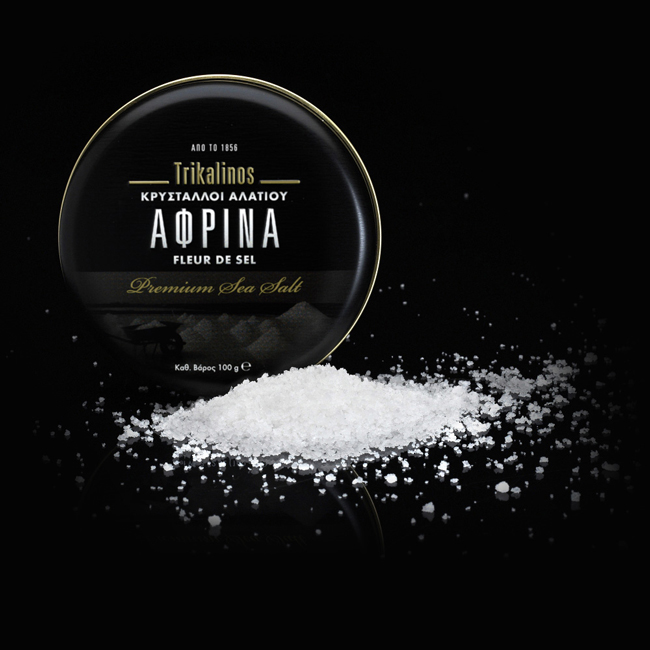 Trikalinos has been rewarded for many years in global gastronomy competitions and is well-known in the proposals and books of the world’s most popular chefs, such as the Spaniards Ferrian Adria and the Roca Brothers, as a dish that combines the delicious flavor, the high quality and beneficial effects on our health.

Also, there have been given many distinctions and certifications to the products of the company, amongst which it has imported certificates from the Japanese authorities and the Japanese Food and Hygiene Organization and has obtained ISO 22000 and ISO 9001 according to TUV CERT procedures. The prizes received by the company are numerous, as in October 2014, when the gift box won the Tokyo Copper Prize in a competition where Evian won first place and Absolute won the second. 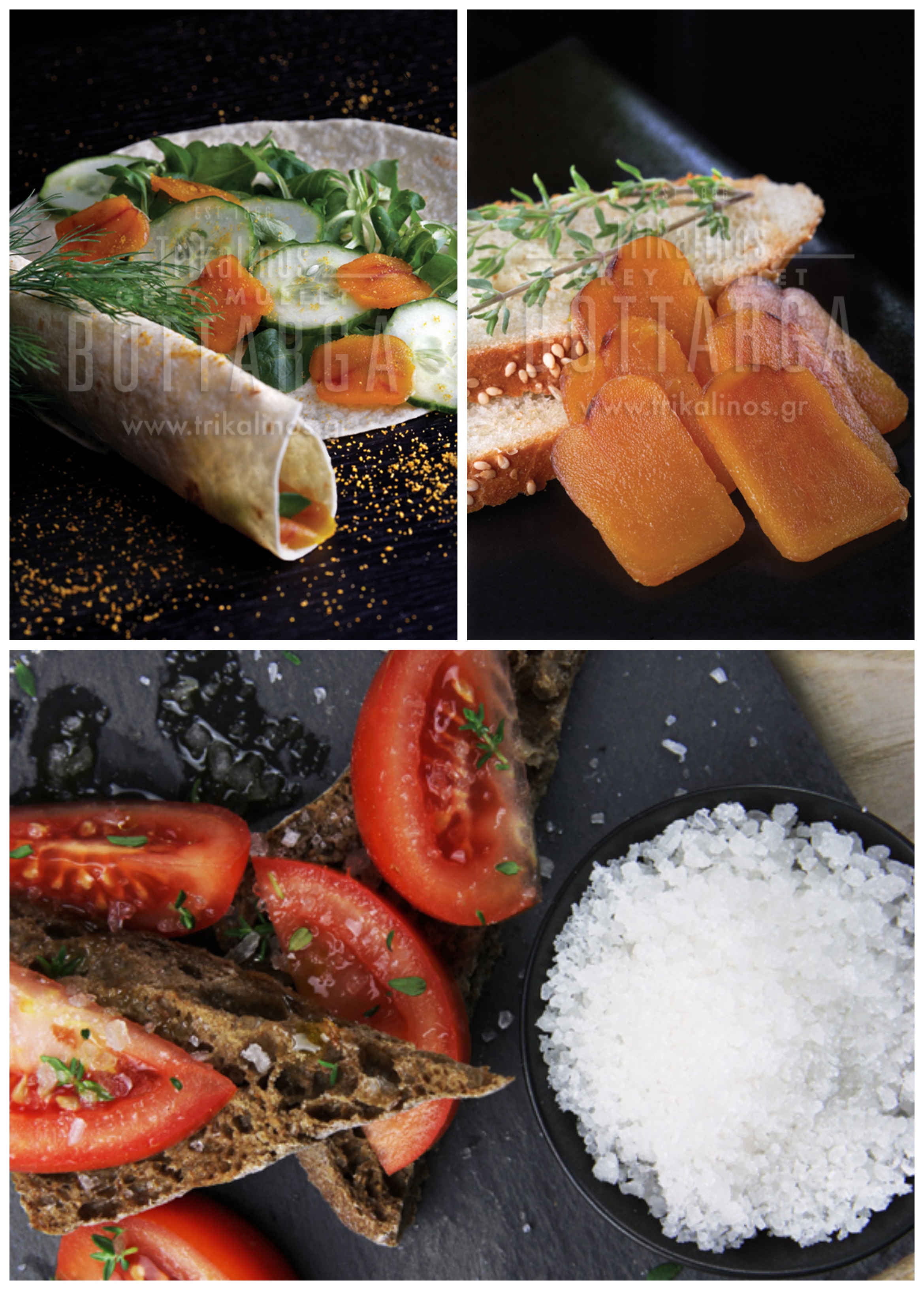 In 2011, its nutritional value and health benefits compared to the preliminary results of the in vivo research conducted by the Pasteur Institute show that Trikalinos Grey Mullet Bottarga as a dietary supplement that may have an anti-atherogenic property with the potential beneficial effect on hypercholesterolemia and in general on cardiovascular diseases. The survey was presented in a satellite speech at the 15th International Symposium on Atherosclerosis and Related Risk Factors, which took place on 25 and 26 November 2011 and was organized by ELIKAR. 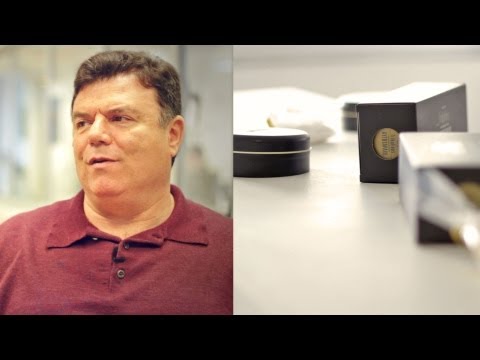