Argoudelis Ltd., one of the few traditional Greek producers who produce handmade halva from their own tahini, thus ensuring its quality and excellent taste, is a traditional affair not only for the business but also for its customers who visit it passing the “tradition“ from generation to generation.

A family history that lasts more than four generations, carries the great pleasure and love of Smyrna and wanders in the Aegean Sea by building its know-how with successive stations in Mytilene, Syros, Tinos and Mykonos, in order to find its first factory in Piraeus, in 1919. Today, with respect and love in its product, the company produces tahini, halva, loukoumi and traditional sweets in exactly the same way as before.

Its goal is to maintain the tradition of the oldest name in Piraeus while continuing to invest without compromise on the quality of the products, in keeping with the modern nutritional needs of the consumers and having as a main pillar the operation of its craft industry the implementation of certified hygiene procedures and practices and food safety. Its main concern is the satisfaction of its customers through the production of quality products that continue its history and tradition in the production of tahini, halva and confectionery products. 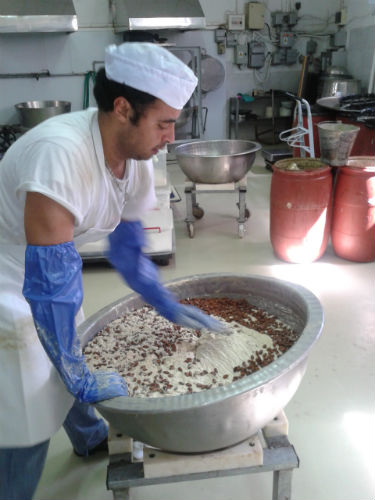 The story of the Argoudeli family begins in Mytilene, where Demetrios N. Argoudelis, in 1850, began the processing of sesame and then the production of tahini and halva. At the same time, they were also involved in the trade in Mytilene in the 10th century 1860. The poverty of those times forced him to seek his fortune in the Cyclades, first in Mykonos.

In 1872, he acquired his first son, Nikolaos D. Argoudelis. In 1890, settled on the island of Syros, father and son made the first loukoumia and sweets of the spoon, as they are called in Greece. In Syros, Nicholas Argoudelis married Anna Fameli, with whom she had nine children. Continuing the tradition and art he had learned from his father, Nicholas Argoudelis and his family fought with poverty, united, making sweets to survive.

Shortly before 1900, the family moved to Tinos and after a few years ended up in Mykonos as the last stopover of its wanderings in the Cyclades. The active spirit and entrepreneurial spirit of Nikolaos Argoudelis led him to finally settle with his family in Piraeus, where he began, in 1905, based in Kaminia, the first house of Argoudeli making candies and loukoumia. 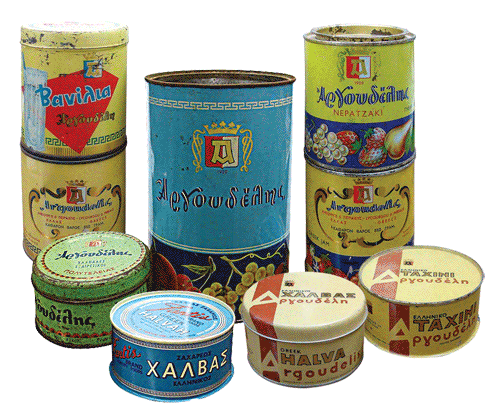 In 1919, the first factory of Halva and Tahini Production was built in Piraeus under the name “Sons of N. Argoudelis“, while in 1925, the company was transported to its current factory on N.Fragoulis 38, where, with a potential of 50 workers, it covered demand the market of almost all of Greece and most of the islands.

After the Second World War, the baton was passed to the grandchildren of Nikolaos Argoudelis, who, with their hard work in the 1950s, reached the craft at the height of its production, exporting its products to the US and Germany. In 1980, in the hands of the next generation, the company is called “ARGOUDELIS LTD“ and continues the tradition inherited from the ancestors, producing, in the same way, its sweets, just as Nicholas Argoudelis did three generations ago.

Today, the 4th generation follows the course that the company has set in the course of time, maintaining its high-quality products, personal relationship with the customer and the most famous name in Piraeus that is inseparably linked to halva, tahini, loukoumi and traditional sweets.

When asked by Vasilis Argoudelis, a fourth-generation representative and current manager of the business, where the company supplies its raw materials, he said: “In order to create high-quality products we need the most exquisite. Sudanese and Ethiopian sesame seeds are considered among the best and most delicious in the world, as they are high in oil, so they are the most expensive ones. As for nuts (almonds) and sugar, we buy them either from Greek producers or we import them. Our aim is to find the best produced in Greece. If something does not exist here, we look for it abroad. Our main criterion is quality. “

All the Argoudelis halva are kneaded by hand, so they have this fibrous, chewy texture. The artisan who deals with halva is really devoted and looks like he understands, feels and hears the halva. This is a process that most closely resembles an art that changes and follows “progress”. 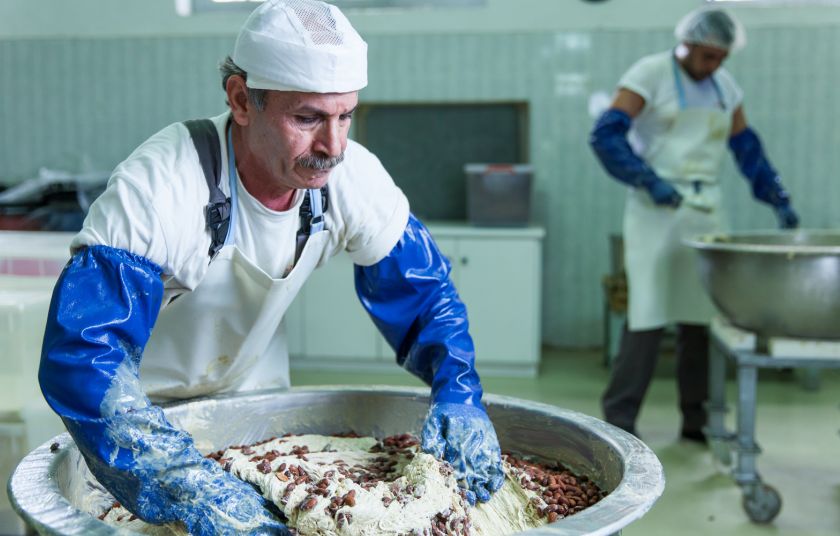 “Initially, sesame goes into saline tanks where it inflates and stands out from the bark,” explains Vasilis Argoudelis. “At that time, pure fruits float, while foreign matter (bark, soil remains, etc.) is concentrated at the bottom. Then, it is gathered with strainer, rinsed with plenty of cold water, dried and soaked in order to taste good rather than getting a bitter taste. Finally, it is milled twice in traditional mills with millstones (like those of olive presses) and becomes tahini.

Then, it’s the turn of the candy. Sugar, water and little glucose – so as it won’t be too sweet – come in a stainless steel cauldron and mix while warming up to form a white elastic candy. After that, art begins. Tahini and caramel fall into large basins (metal basins) and are kneaded with gentle, masterful movements from our craftsmen to blend in properly giving the halva its fine fibrous texture. “ 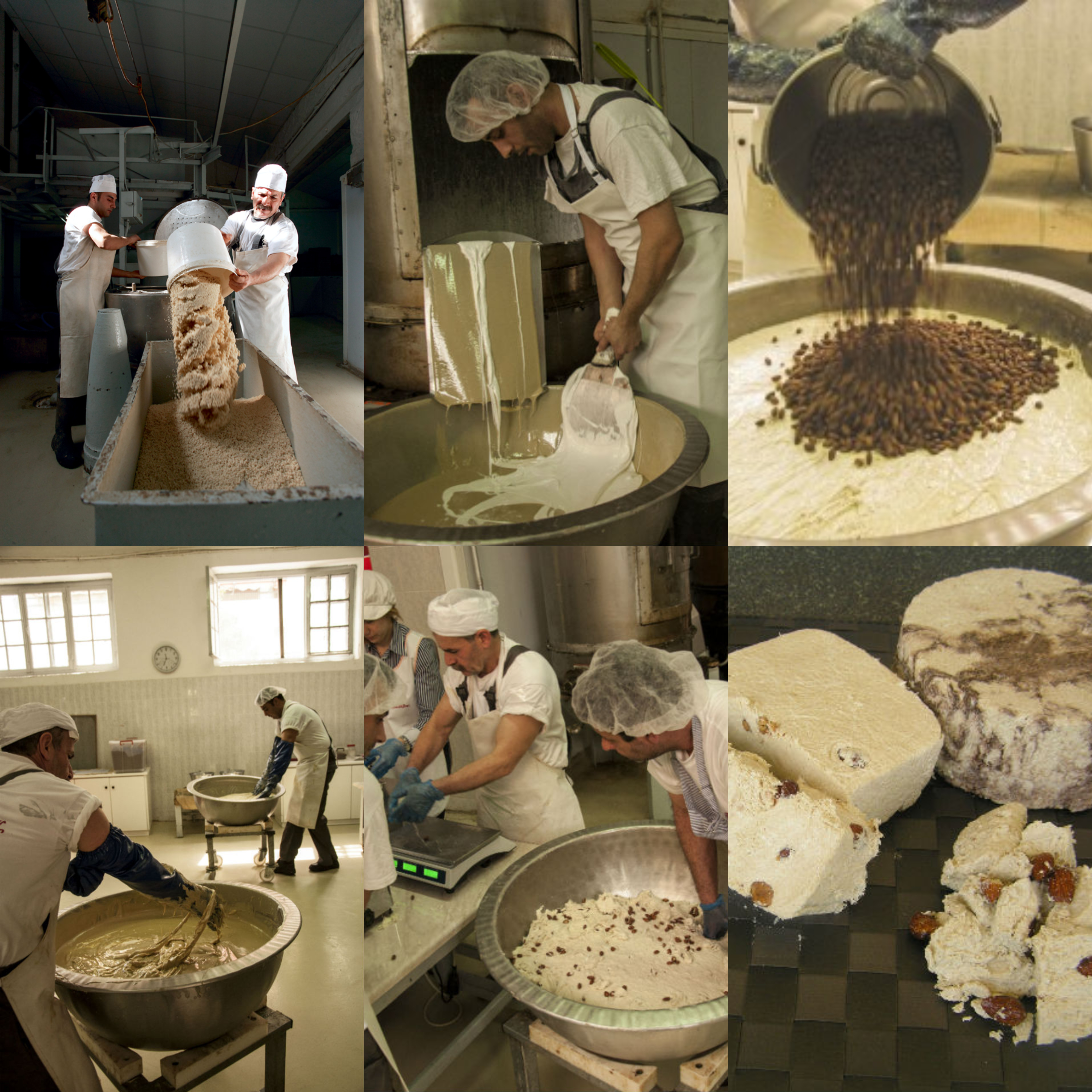 Watching the trend and the need of the market today, Argoudelis’ Halva offers unique coffee-flavored halva, with natural Chios mastic, full hazelnut, whole grain, with pistachio, but without sugar – with natural sweeteners such as stevia.

In addition to the halva, which is available in three traditional flavors, almond, cocoa and vanilla, it also produces excellent tahini of excellent quality, spoon sweets in sixteen different flavors made with the homemade recipe that is transferred from generation to generation in the family of fresh fruit, submarine in flavors of vanilla, mastic, pistachio and rose. The new generation is also experimenting with new flavors and techniques. 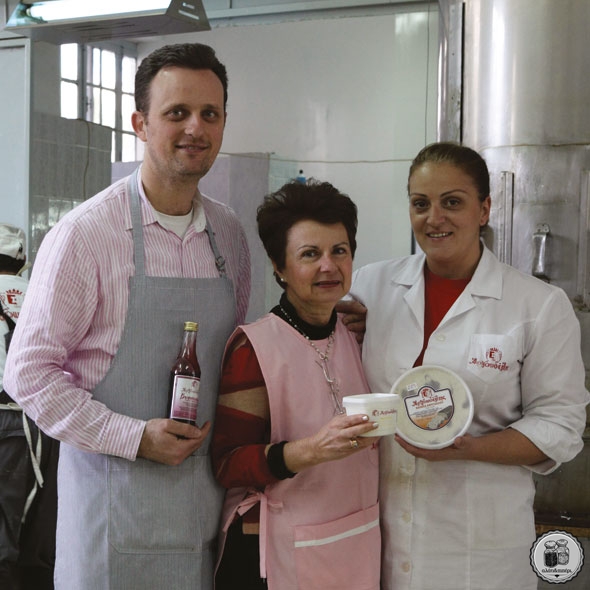 Vasilis Argoudelis is asked whether it is possible to buy the products from elsewhere in the region or if the company cooperates with big supermarkets and he replies that “All our products (tahini, halva, sweets, jams, loukoumia) are available here at the retail department of the workshop and in our service station in Piraeus. You can also find them in grocery stores and small food stores in Attica, Peloponnese, Sterea Hellas and the islands.

We prefer not to cooperate with large supermarkets because the demand is great and its coverage difficult by a small unit like us. Also, economic dependence on one or two big clients does not favor a business, especially in times of crisis like the one we are in. ” 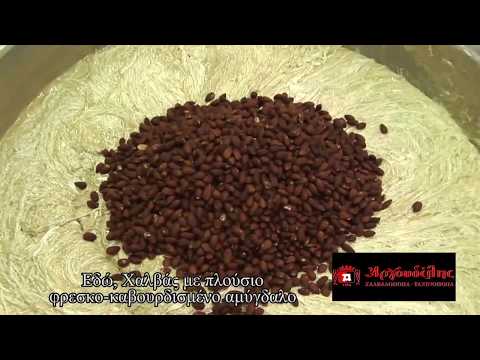