Kalavryta is one of the most popular destinations in the prefecture of Achaea, situated 77 km. away from its capital, Patra. It is a mountainous town, inextricably linked with winter tourism, since it has become the base of thousands of visitors who come each year to enjoy winter sports at the nearby ski resort.

The area around Kalavryta was inhabited in antiquity; a settlement is mentioned in 776 B.C. southeast of today’s Kalavryta with the name Kynaithi, which reveals the local people’s affinity for hunting (kynighi). The name “Kalavryta” appears during the Frankish rule and derives from the words kala vrya (good mosses), since water was plentiful in the area, both in and outside this Achaean town.

Twenty-two km away lies the coastal town of Diakofto, with which Kalavryta is connected through the famous Odontotos rack railway. This railway is unique in the whole world and traverses the splendid landscape of the imposing gorge of the Vouraikos river. The area around Kalavryta abounds with many noteworthy monasteries, the most important being the Holy Monastery of Mega Spileo and the Holy Monastery of Aghia Lavra.

Under the shadow of the Chelmos mountain, at an altitude of 756 m., lies the picturesque town of Kalavryta, which has steadily been a reference point both for the visitors to the ski resort in the winter, situated 14 km away, and those who come to admire the unique natural landscape and to walk around areas of inimitable natural beauty year-round.

The visitor must not miss the unique opportunity to take a ride on the Odontotos rack railway, which connects Kalavryta and Diakofto. Attached to the rock, the railway “pierces” the mountains, traversing the Vouraikos gorge, leaving the traveller speechless with the impressive landscape: lush vegetation, wild areas, waterfalls and cave-like formations constitute the landscape of one of the most spectacular routes in the Balkans, as it has been said. The railway was constructed 117 years ago and the route it traverses has remained unchanged. The route takes approximately one hour to complete and covers a distance of 22 km.

The town’s central area is the picturesque street of the market, where one can buy herbs, walnuts, tea, honey, noodles, chestnuts, as well as the famous rose-sugar, the sweet preserve made with roses. The town is also home to the famous Mansion of Paleologhina, the renovated 15th century building which has been converted to a cultural events centre.

Nearby there is also the Municipal Museum of the Holocaust of Kalavryta, founded with the money donated by Andreas Syngros to the Greek State in 1897, so that it would go towards the creation of schools and institutions. The Museum is housed in the building where part of the tragedy of December 13th, 1943 took place, known in history as one of the worst war crimes ever committed against Greece. The school was renovated and in 1986 it was declared a protected monument, which was to house the Museum that stands today as a reminder of all those who perished in the atrocities. Approximately 500 m. east of the town lies the Kapi hill, where we come across the Sacrifice Area with the large cross, a reminder of the people who were executed by the German conquerors.

The area around Kalavryta abounds with religious monuments, which testify to the fact that monasticism developed greatly in these parts. Of great importance is the Holy Monastery of Aghia Lavra, 5 km southwest of Kalavryta, which played a significant role during the Greek Revolution of 1821, since here Paleon Patron Germanos blessed the warriors and declared the start of the Revolution; here, also, the flag of the Revolution was raised and it is still kept in the Monastery. Another important Monastery was also that of the Mega Spileon, 10 km northeast of Kalavryta, built in 362, which preserves a plethora of significant heirlooms, including the icon of the Panaghia, a work of Luke the Evangelist.

Approximately 17 km from Kalavryta the visitor will find another important area, of great geological significance, the Cave of the Lakes (Spileo Limnon). It is located in the village of Kastria and it is a rare work of nature, with a unique phenomenon that does not appear in any other cave in the world: the many small lakes that are formed in its interior extend on three different levels. So far 500 m. of the cave have been exploited. The visitor enters the second floor through an artificial tunnel and crosses the lakes by way of artificial bridges. The cave is of great paleontological interest since it unveiled human and animal bones, including those of a hippopotamus.

– The monastery of Agia Lavra was built in 961 AD, on Helmos Mountain , at an altitude of 961 meters, and can be described as the symbolic birth-place of modern Greece.
– The liberation of Kalavrita was held on March 25 after a 5-days Turkish resistance; At St. Lavra’s Church Paleon Patron Germanos put Greek Fighters under oath before the beginning of the Greek Revolution against Turks. Miraculously the Flag has not suffered any damage, despite the arson and looting that took place in the Monastery of St. Lavra. Nowadays the Flag of the War of Independence is unquestionably the most important relic that Greek nation has. 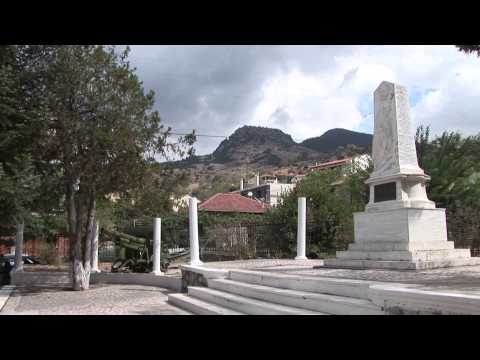