Walking through the Plaka Straits, under the watchful eye of the Acropolis, one can admire many neoclassical buildings, low houses and small beautiful corners of old Athens. However, taking such a walk, it is impossible not to catch the eye of the Tower of the Winds or the Monument of the Winds. A monument that stands there from the 1st Century BC. The octagonal tower, 13.5 meters high, is made of Pentelic marble and was designed by the astronomer Andronikos from Kyrros, Macedonia (which is why it is sometimes called the Clock of the Lord).

The fate of several ancient monuments of many countries, including Greece, was not good since some were destroyed while others were emigrated forever and are in museums of foreign countries. The Tower of the Winds, however, was lucky because of the Dervishes where they considered it sacred and thus did not allow Elgin to take it. 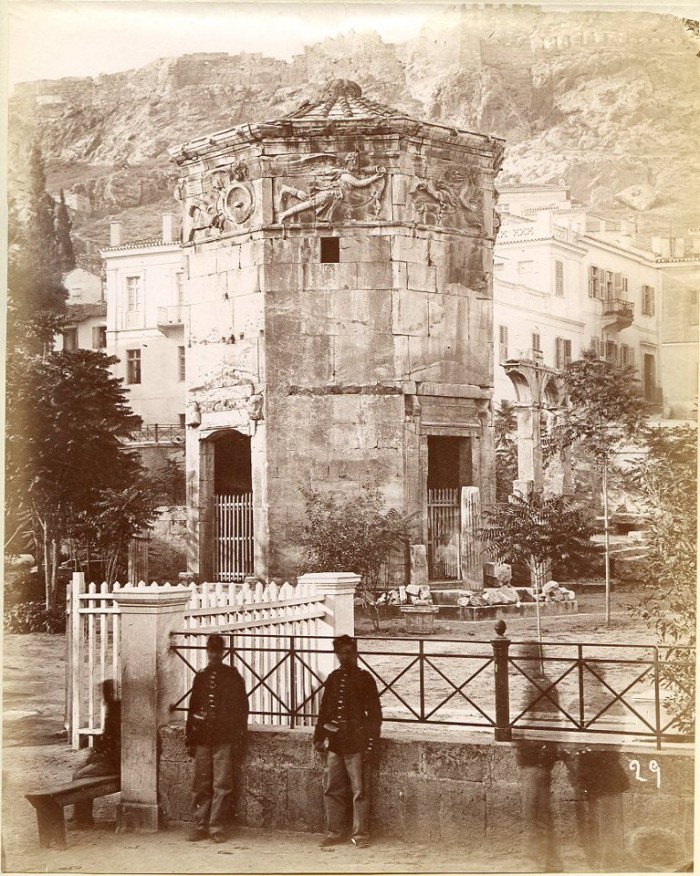 To this day, the exact reason for its construction, in the middle of the Roman Agora, is not known. According to the estimates of archaeologists, it is probably a kind of meteorological station, which also functioned as a clock, which was probably used by the merchants of the time to calculate the time and the prevailing winds and the influence of the commercial itineraries that reached the their products in the then markets of the world.

At the top of the roof there was a brass wind vane in the form of a Triton, which rotated to indicate, holding a pointer, the direction of one of the eight main winds. The winds, personified, are said to fly in relief (winged) at the top of each side of the tower, each carrying a special symbol. Their names are engraved below the corresponding part of the octagonal cornice, and are: North (north), Kaikias (northeast), Apiliotis (east), Evros(southeast), South (south), Lips ( Livas, southwest), Zephyrus (west), and Skiron (northwest). Under each personification, engraved rays in various formations were the original sundial.

Inside the Tower there was a hydraulic clock, which counted the time on days when there was no sunshine but also at night.

Especially for the calculation of the time on days without sun, there was a special installation of a hydraulic clock inside the building. This leads to the conclusion that the maker of the monument combined the inventions of previous watch makers, such as Archimedes, Ctesiphon and Philo. In fact, as Warron notes, on the south side of the building there was a cylindrical container with water that was supplied through a pipeline from a source on the north side of the Acropolis. Vitruvius calls this monument “Tower of the Winds” and describes it in great detail. Finally, the monument is classified in the Corinthian style (from the capitals) while its interior in the Doric style (heavy strict). Continuation of the SE building was the Market Store on a multi-level marble base. 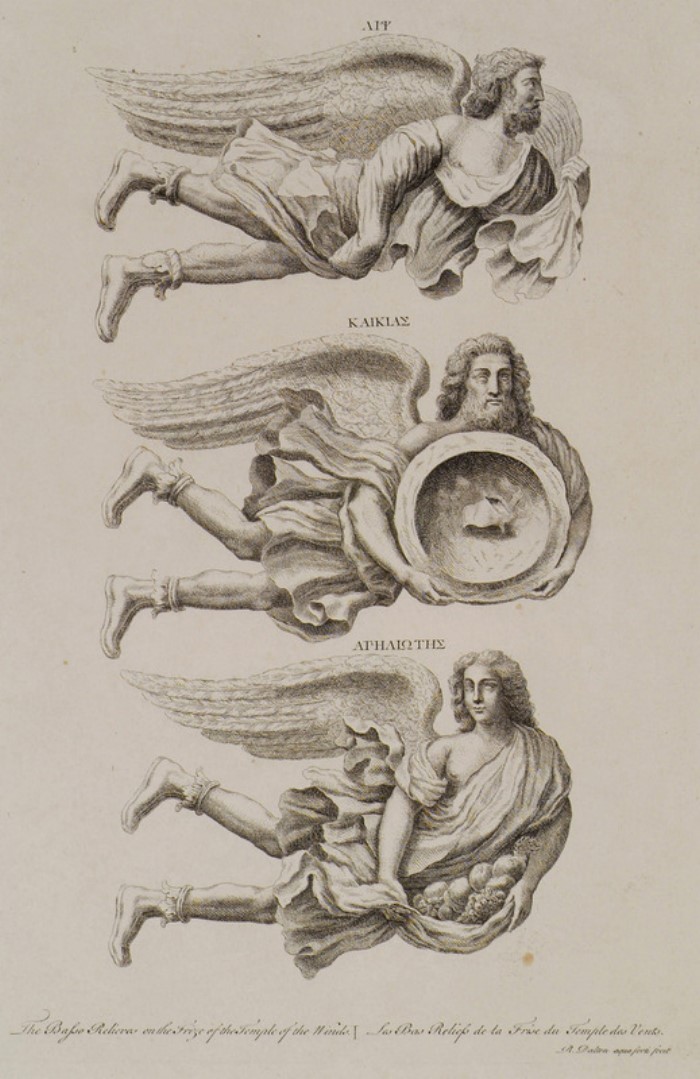 During the Christian years, the Aerides became a church and a cemetery was built in the surrounding area. It was the custom of the time when there were ancient Greek buildings being demolished or converted into Christian churches. In fact, when the Turks recaptured Athens in the 18th century, the monument became a place of prayer for the Order of Dervishes of Mevlevi and was named “Brakis’s tomb”. Then the windows that still exist today were opened. For the sake of the Mevlevi Dervishes, the monument remained in Greece and was saved by Elgin. Lord Elgin wanted to move the whole building to Britain but the Mevlevi did not allow it. After the liberation of Greece from the Turks, the Athenians believed that the temple was dedicated to the god of winds, Aeolus, hence the name of Aeolus Street. 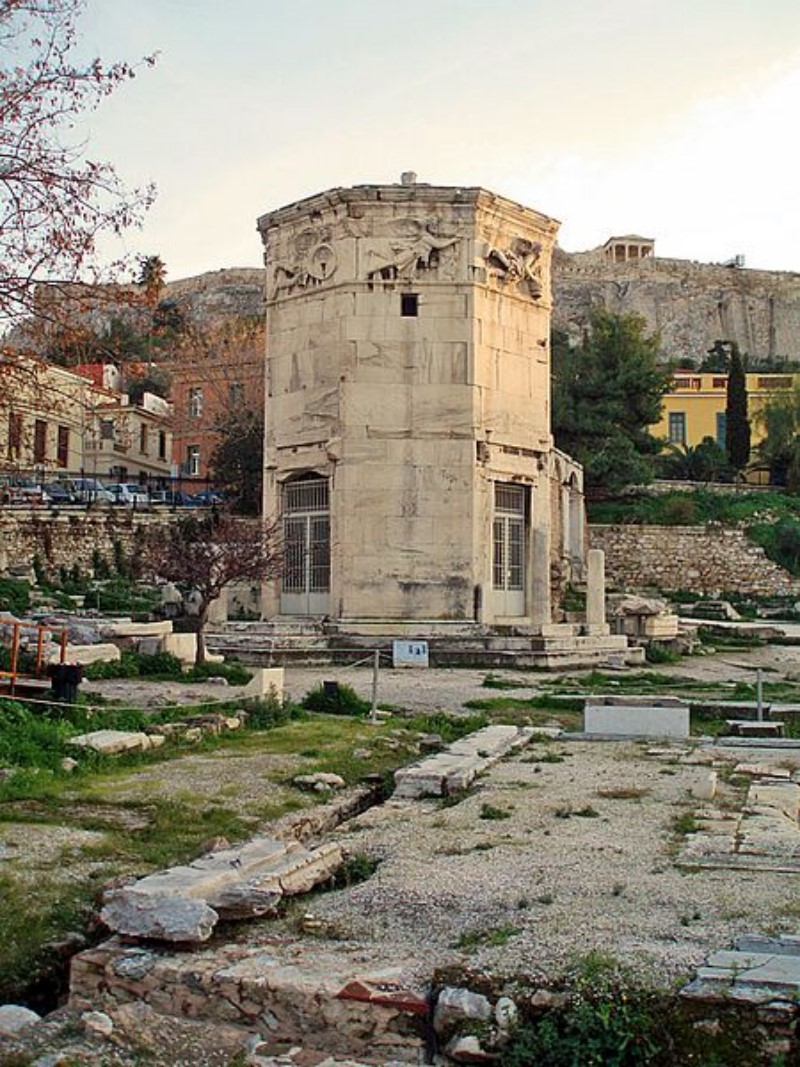 The most famous monument in the center of Athens is of course the Parthenon on the Acropolis. But the center of the capital has many monuments and attractions, which are worth visiting even if you are on vacation in your city. After all, Athens is full of small treasures and many times it takes time and good mood to discover them. The building of Aerides after maintenance and restoration works is now accessible to the public.