Colorful, shiny pebbles, crystal clear waters, unique rock formations, the wonderful white color of “chalk earth”, warm springs gushing on the sandy beaches and volcanic earth of millions of years. Kimolos is a place of unique beauty, where nature surprises with its creations at every step.

According to tradition, its first mythical settler was Kimolos, husband of Sidi, daughter of Taurus, to whom the island owes its name. It was also known as Echinousa, probably due to the chalk echidna (viper) that still abounds on the island. The sailors of the Middle Ages called it Argentiera (silver), for its silver and white rocks that emerge from the shining sea. 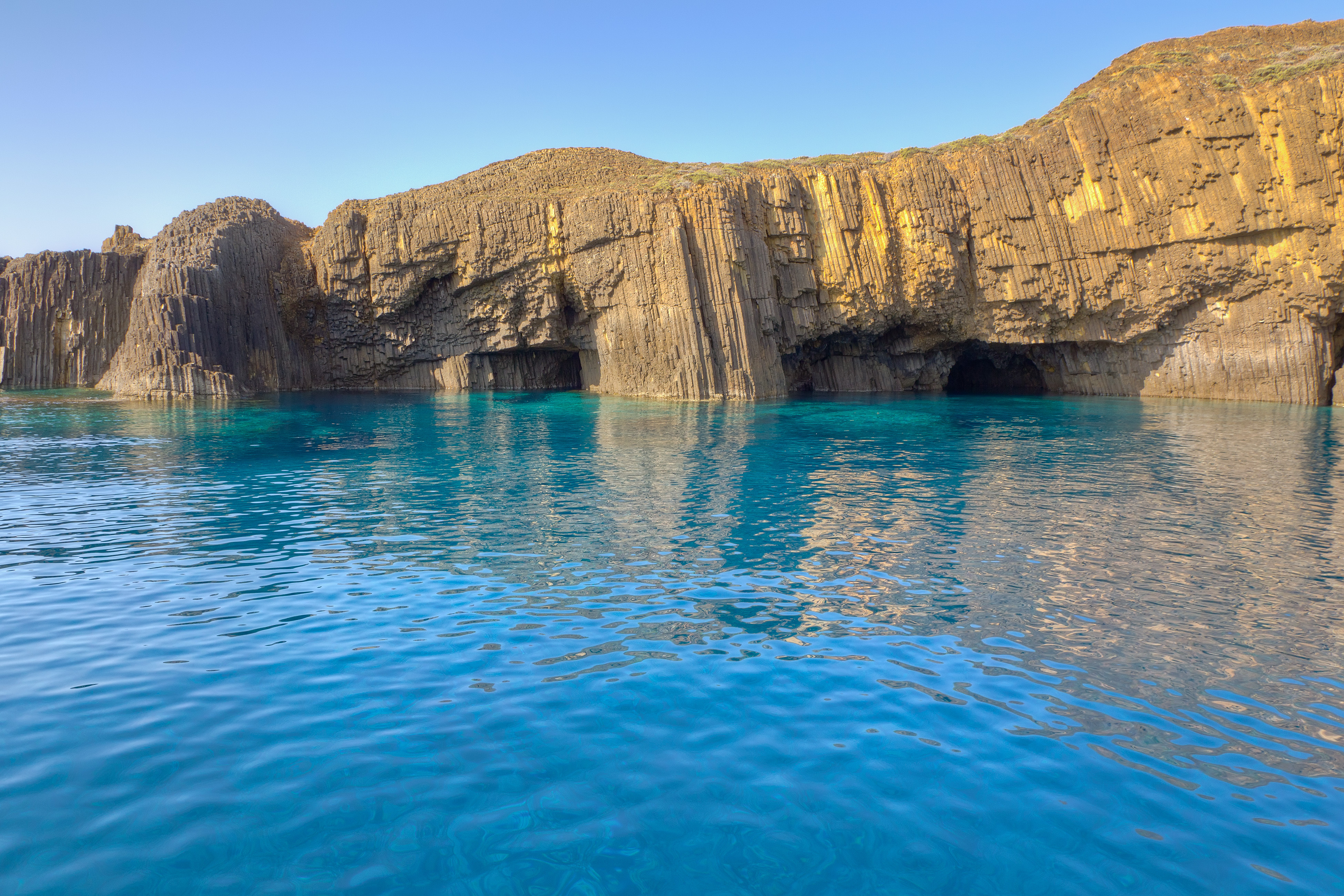 Chorio is the only settlement on the island, at the foot of Mount Xaplovouni, which enchants with its simplicity, picturesqueness and purity. The arches and covered passages are ideal for walks between white houses with flowery courtyards. From the School Square, one can admire the moon and from the chapel of the Pantocrator, at the top of the hill, the view of the nearby islands, such as the neighboring Milos.

The core of the Village is the Medieval Castle of the 14th-15th century, which consists of two house complexes, the Inside Castle, which is now in ruins, and the Outside Castle, whose houses had a fortified arrangement to protect the inhabitants from pirate raids and would-be conquerors. 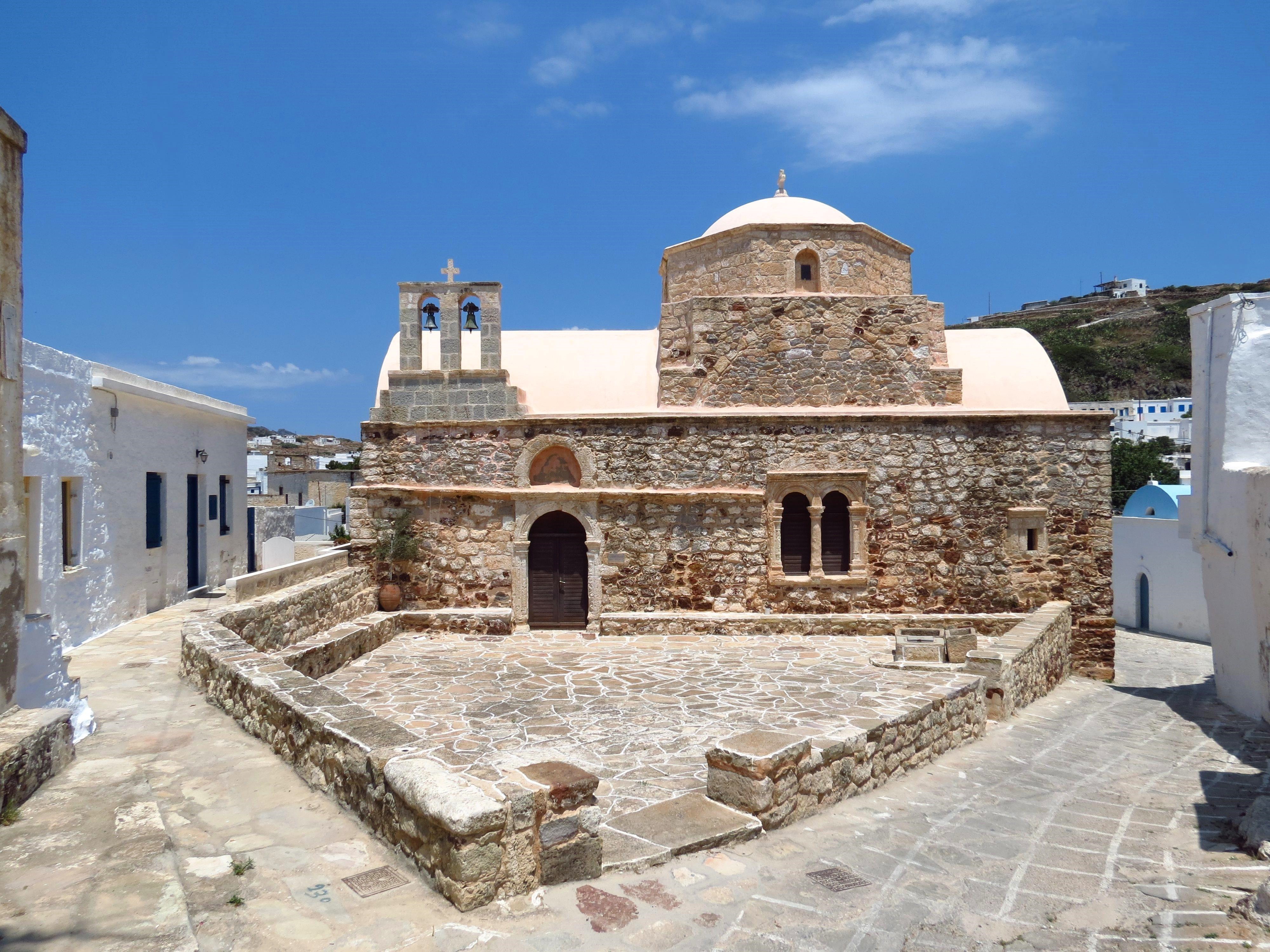 Kimolos, although small, has over eighty churches, adorned with remarkable icons. Eight of them, of the 16th and 17th centuries, the Nativity of Christ, Chrysostom, Our Lady of the Treasurer, the Brigadiers, Chrysopigi, the Savior, the Anargyros Saints and the Pantocrator are protected by the Ministry of Culture.

The majestic and imposing Metropolitan Church of the island, “Panagia the Οdigitria”, was built in 7 years (1867 – 1874) thanks to the personal, non-profit work of all the inhabitants. 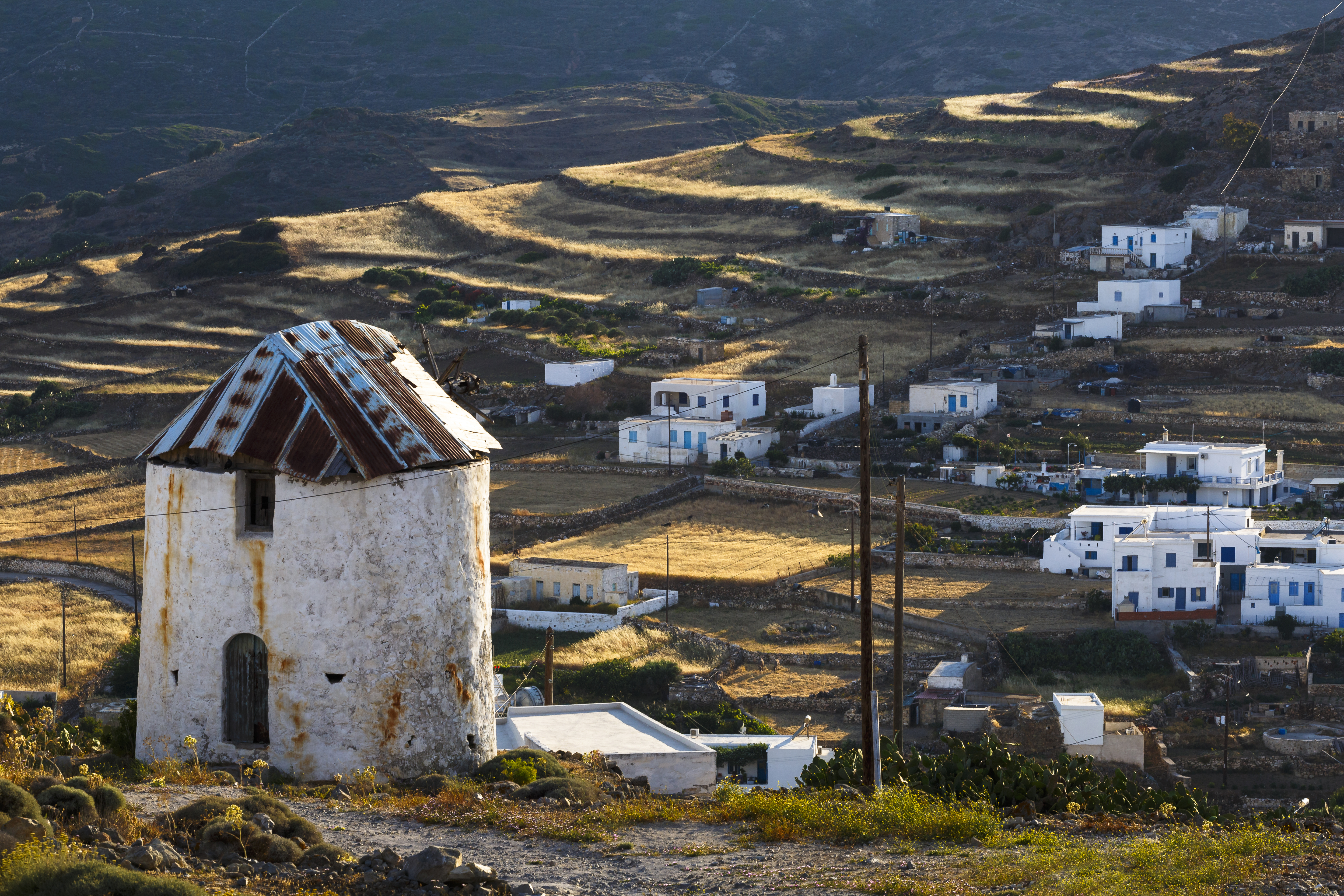 Opposite the Metropolitan Church of Odigitria, is the new Archaeological Museum and inside the Castle, the Folklore-Naval Museum of the island. The first has thousands-of-years exhibits of the island – impressive is the crystal clear floor, under which there is a representation of an ancient burial, as found during the excavation – while the Folklore Museum, the ancestral home of its founder, maintains the folk tradition of the place and it is passed onto future generations as a beacon in their lives.

In the northwestern part of Kimolos, west of the “Sklavos” hill, there is a huge stone mushroom that the locals call “Skiadi”. It is a monument of nature located in the middle of a bare plateau with a wonderful view, as it embraces the southwestern and western shores of the island and a large part of Milos.

“Skiadi” owes its creation to the different rocks that make it up and the strong winds that blow in its area. The softest rock at the base is affected and eroded by wind carrying dust or grains of sand. The result of the process of “rejection”, during which the base is “eaten” and constantly narrows, while the top, being harder, remains almost intact, is the beautiful sculpture of Kimolos nature, “Skiadi”.

At the southern exit of the village, the picturesque fishing settlement of Goupa is nestled, with the “Wires”, the caves that the fishermen carved on the rocks to drag their boats in the winter. Next to the “Wires”, is the Rema, a pebbled shore with blue-green waters that look like a natural pool. At the edge of the crab, stands the “elephant”, a form that the sea and the air sculpted over time. 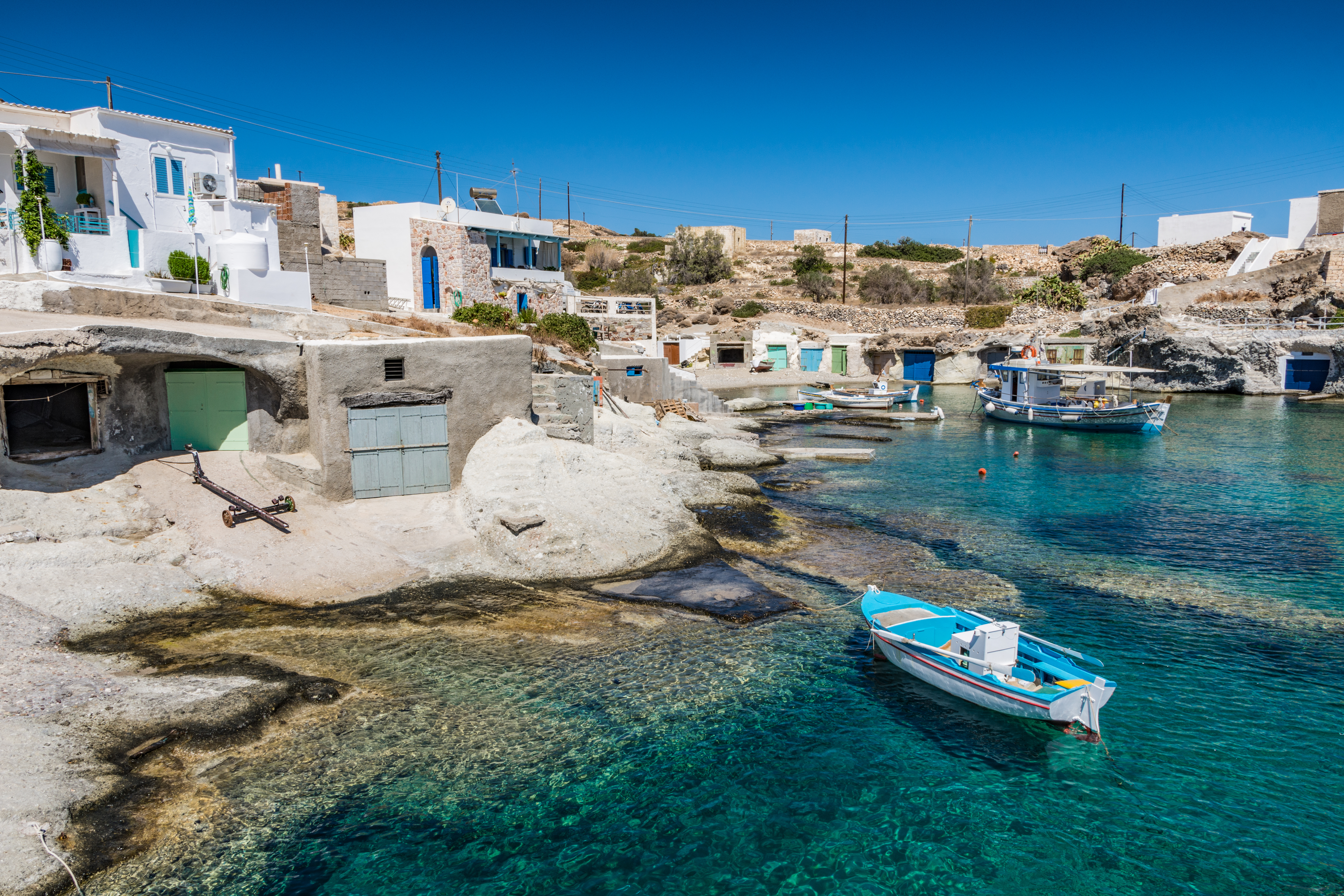 As for its beaches, they hide many treasures, starting from the ancient city of Kimolos, which lies submerged in the sea, in the location of “Ellinika”, in a promontory of the land that connected the island of Agios Andreas with Kimolos. Today, the ruins of its acropolis on the island of Agios Andreas and its cemetery with tombs carved into the rocks in the area of ​​Ellinika are preserved.

The “explorers”, with a sea-mask, can locate the ruins on the seabed; tombs, houses, wells and walls testify to a culture that flourished before a major earthquake, dating to the Mycenaean period, perhaps even earlier. 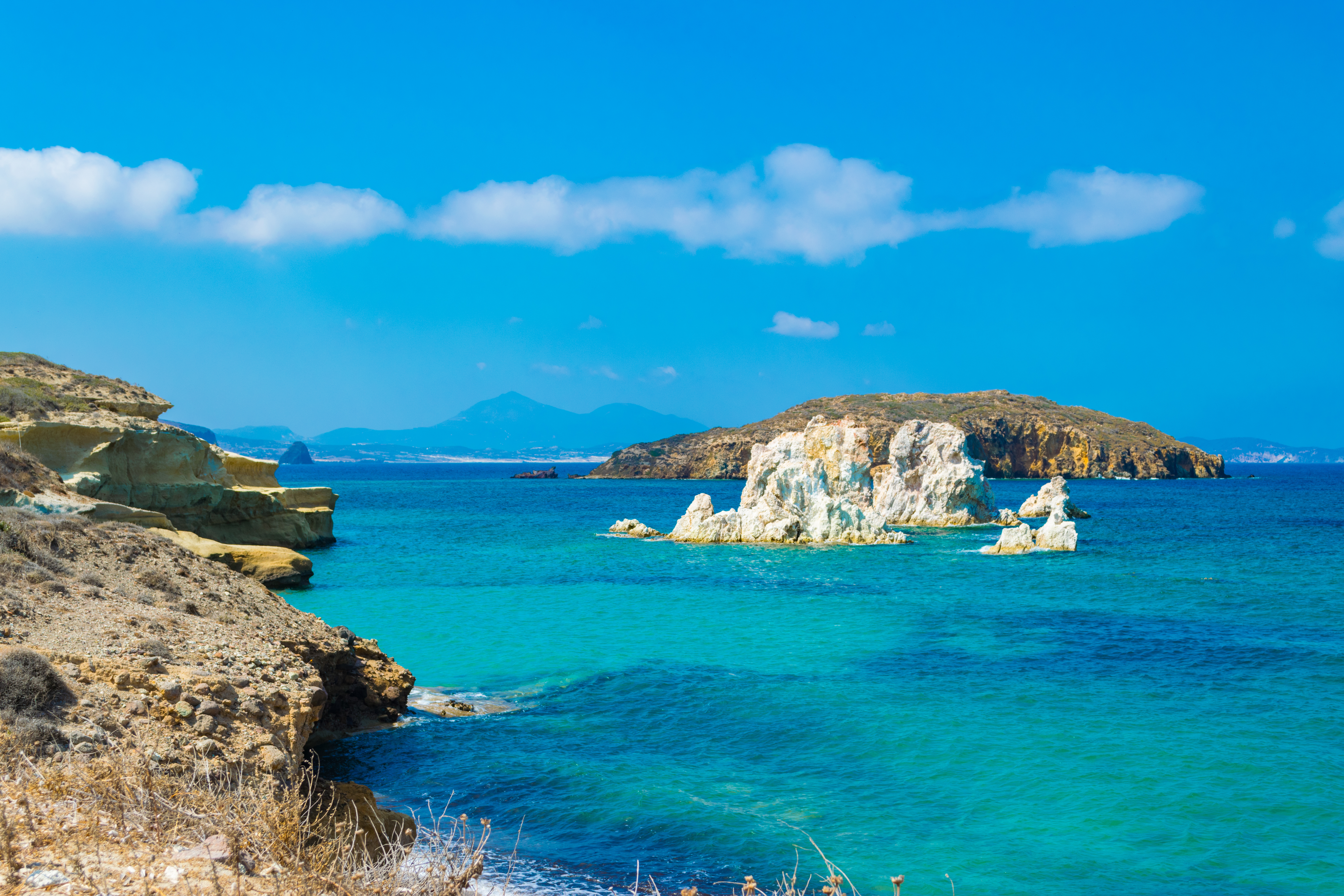 In Mavrospilia, there are the impressive pumice formations with huge pieces up to 3 m in diameter that are considered to be one of the largest formations observed worldwide. These pieces of pumice stone come from a volcanic resource that was then in a terrestrial environment and from which strong currents erupted bubbling magma, which almost immediately entered the sea, cooled, shredded and sank.

One of the most impressive beaches of Kimolos with turquoise waters and white coarse sand is Prassa Beach, where thermal baths operate at the entrance of the settlement. 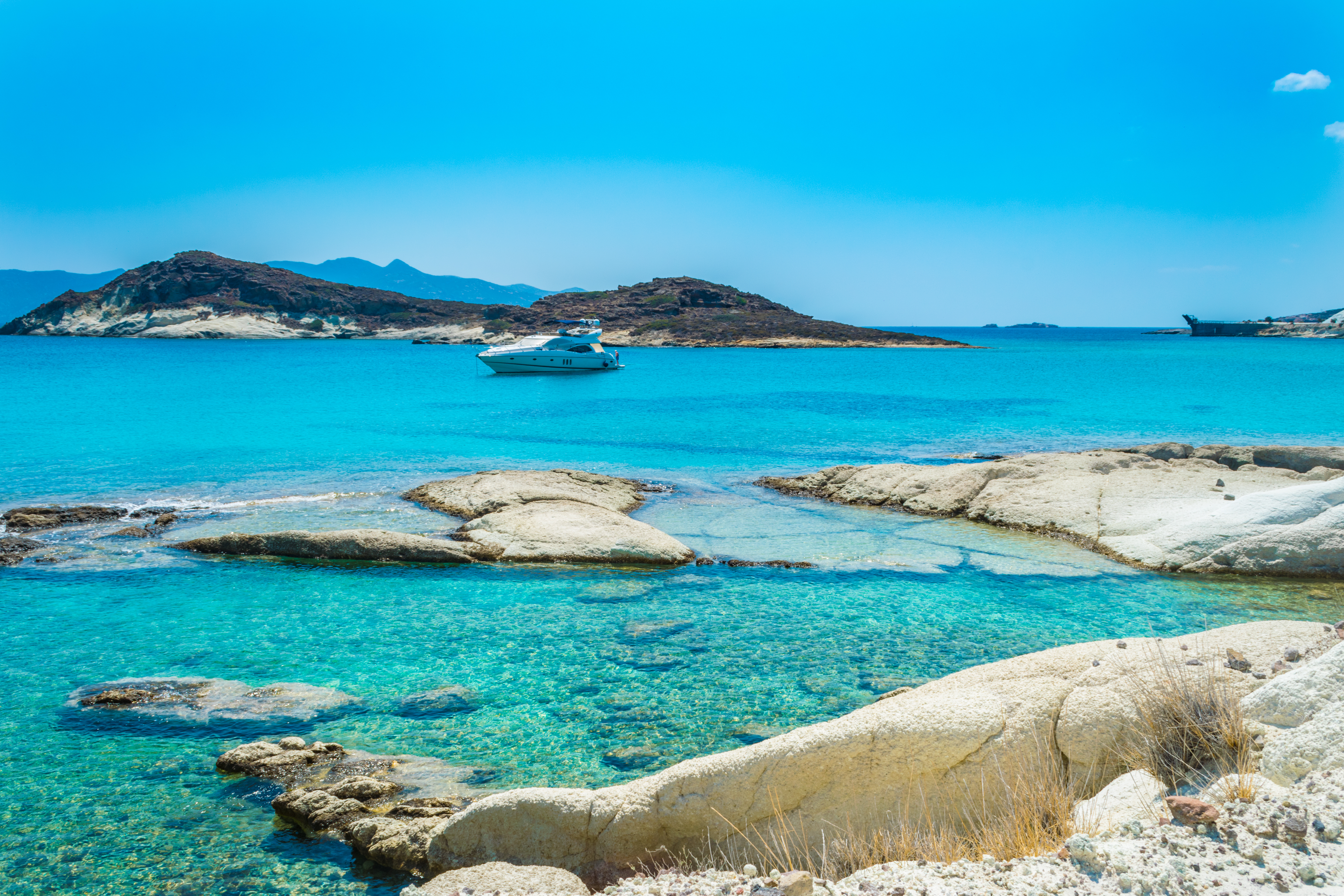 By boat, the beautiful beaches and wild landscapes are only a little while away. The submarine cave of Gerakia, with its crystal clear waters, gives the visitor the opportunity to explore it by walking in the shallows, while, in Agioklima, they will be revitalized in the warm thermal water and, in “Geronikola t’Apsila”, they will admire the gray-white volcanic rocks.

An earthly paradise within a nautical mile from Kimolos is waiting to be explored. Polyaigos, the largest uninhabited island in the Cyclades, with rare beauty beaches, hosts rare species of flora and fauna in wild landscapes, while its beautiful beaches, such as Mersini and the Blue Waters, attract boat owners from all over the world. 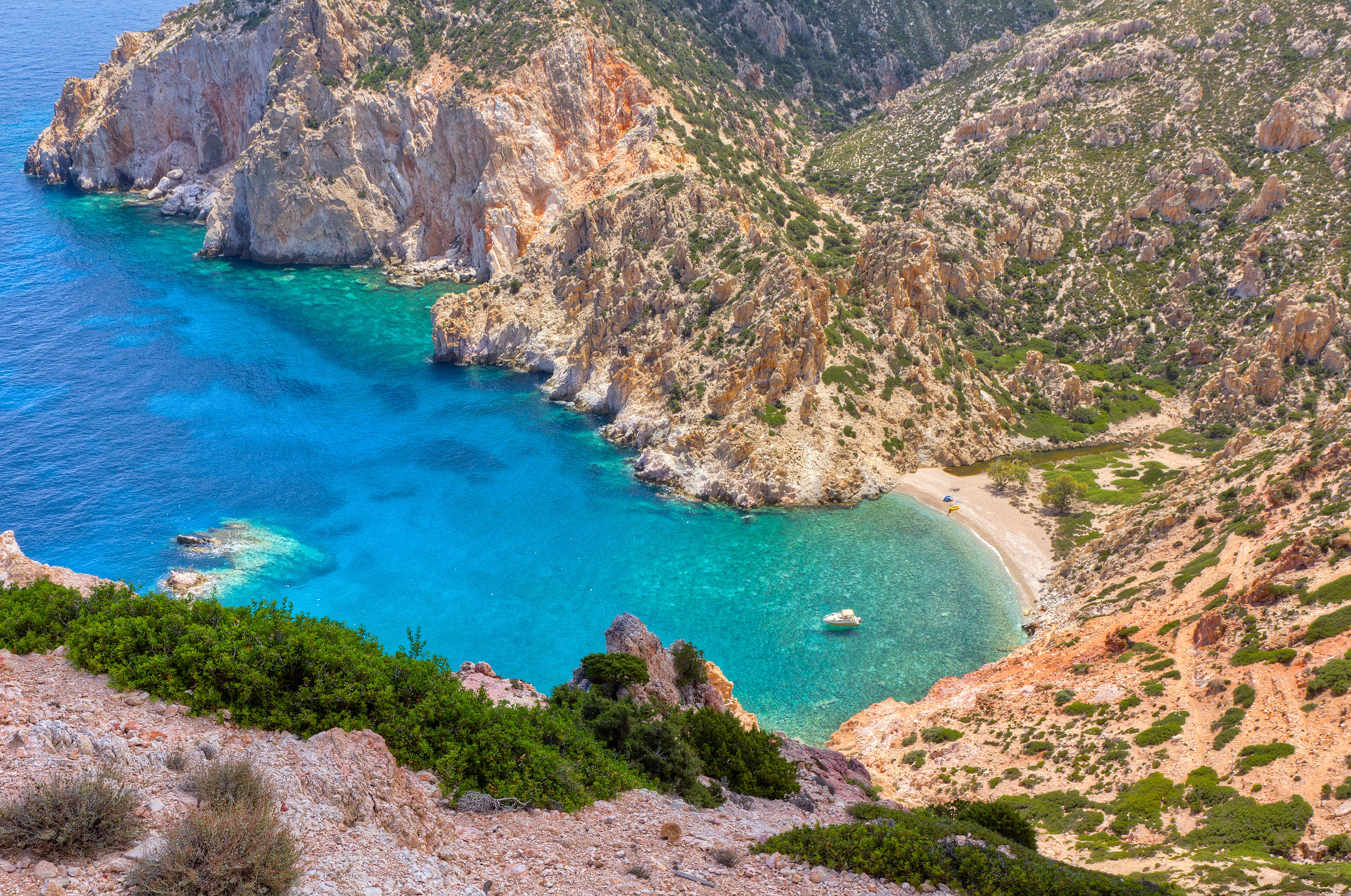 The boating, in fact, has alterations with sandy beaches and wilder landscapes, cave passes and rocks. Polyaigos has been characterized as a place with special geological and ecological value and has been included in the Natura 2000 program.

Hiking enthusiasts will love it, as Kimolos has dozens of rural paths. The island also has a unique natural environment, where the Mediterranean seal “Monachus-monachus” lives and is endowed with unusual geological formations that compose landscapes of rare beauty, with semi-precious stones and many industrial minerals. 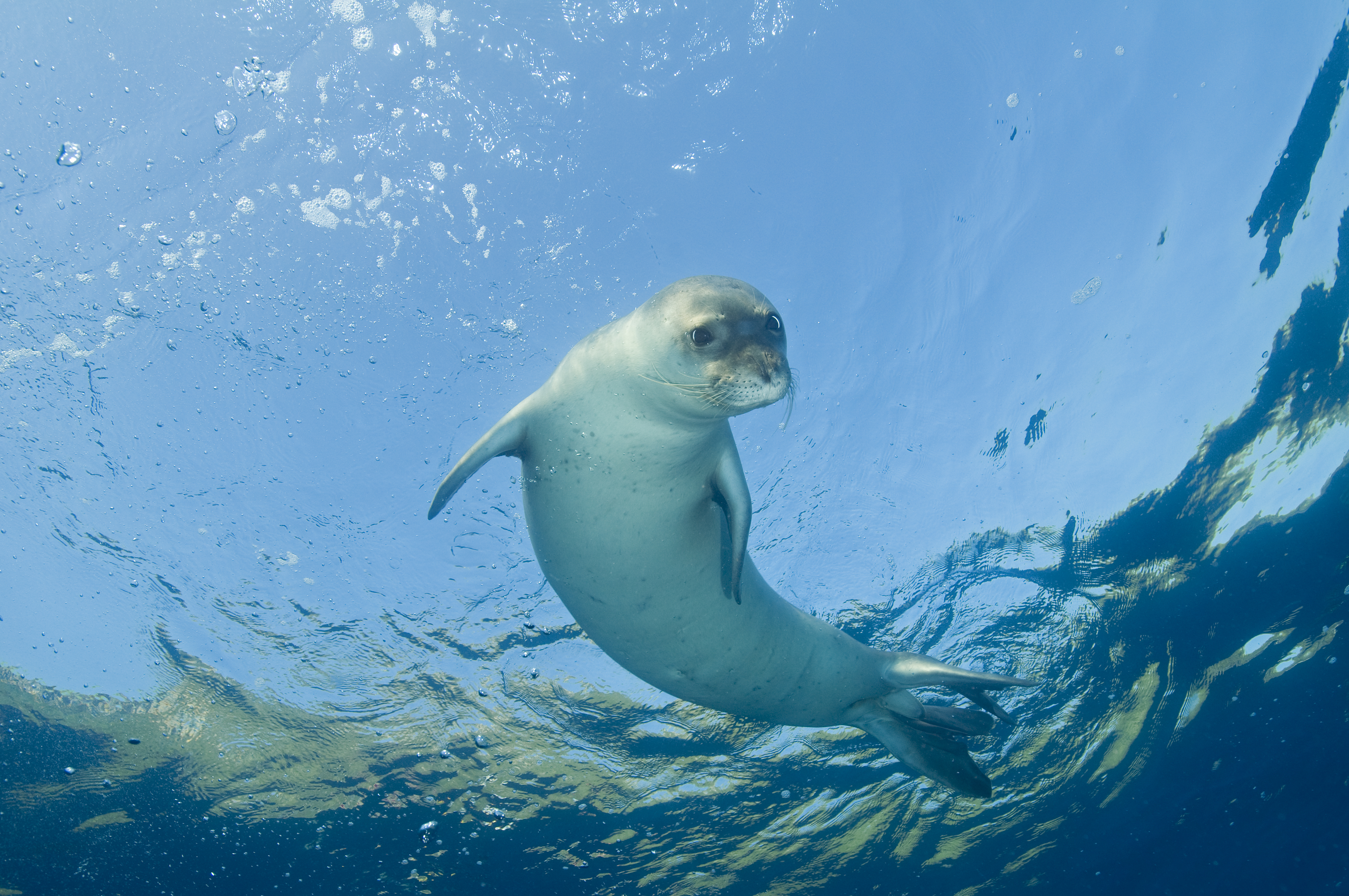 Traditional Kimolian delicacies are characterized by simplicity, imagination and special combinations. The most famous is ladenia, a unique, purely Kimolian product, made with dough, fresh tomatoes, onions and olive oil. Equally beloved are “tirenia”, a kind of open cheese pie with a loaf of bread dough, and “pitenia”, bread stuffed with corona olives and nuts with squash.

Kimolos also has excellent honey for sale, sour (sour fresh mizithra), manoura (dry cheese wrapped in the “mud” of the must) and capers. 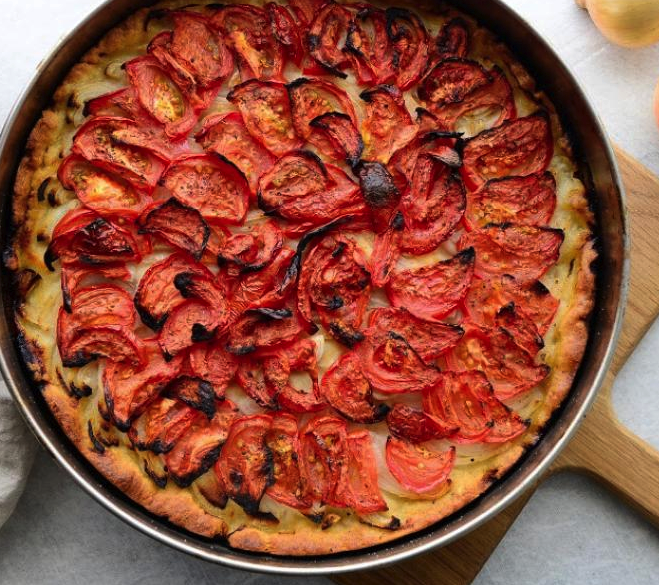 Small, but picturesque and authentic, with friendly inhabitants and its own special beauty, Kimolos is the ideal destination for the visitor who wants to relax and unwind, away from the cosmopolitan places and the hustle and bustle. 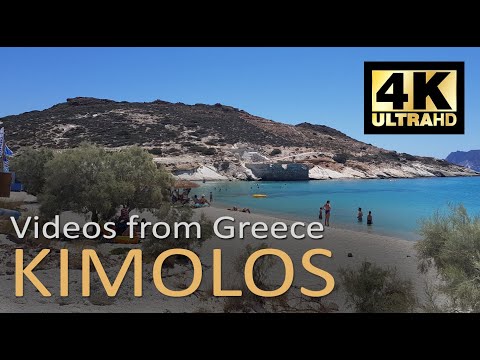