A unique destination-museum and the ideal place for the summer holiday to become a journey to ancient Greek history and mythology is Delos, the island-landmark in the heart of the ancient Aegean world.

The Naxian Lions Terrace of Delos, Artemision, Pythio, the House of Dionysus, the ancient theater, the five marble lion-guards and the temple of Isis are just some of the remnants of antiquity that stimulate Greek pride and the impatience for discovery and exploration. 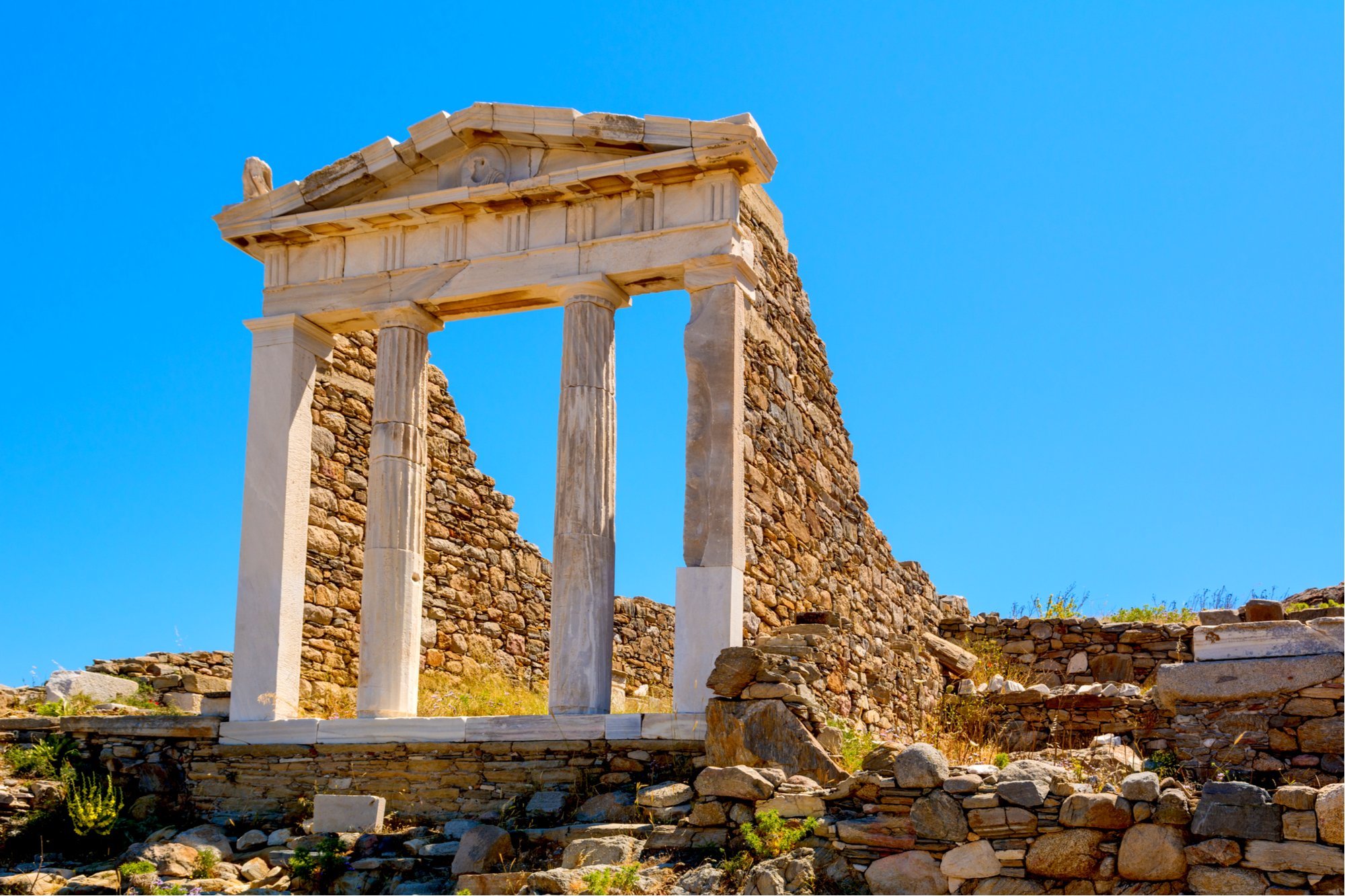 Delos, although one of the smallest islands in the Aegean, was the most famous and most sacred of all because according to myth it was the birthplace of the god Apollo-Helios, the god of the daylight, and Artemis-Moon, the goddess of night light. The place where the light was born, however, was the most precious good for the Greeks of the time, and so the island was a sacred and worshipping place.

In 540 BC, Peisistratus decided its first purification, while with the second, in 426 BC, the bones of all the dead of Delos were transferred to the neighboring island of Rhenia, and both births and deaths were banned on the holy island of Apollo, in order to avoid its “contamination”. Nearly a century later, with the advent of the Macedonians, the island gained its independence and the ability to grow commercially. 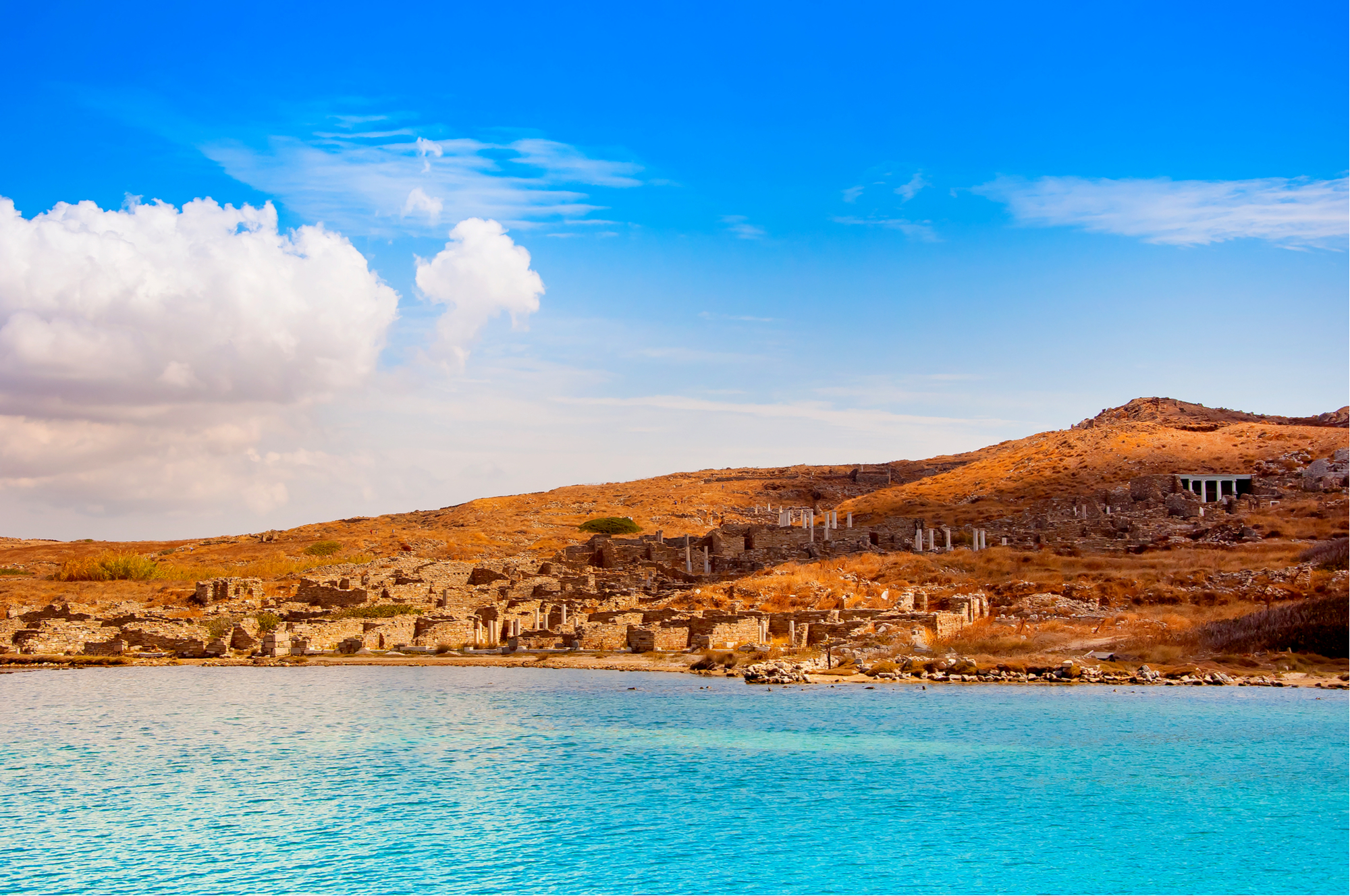 The story continues with the establishment of the Romans, which resulted in the numerous arrivals of Egyptians, Syrians and Italians, and the greatest development of the island until 88 BC, where during the Mithridatic wars, it received two major attacks, which led to its decay and final abandonment, in the 6th century AD.

In the early Christian centuries, there was still an important Christian community, as evidenced by the remains of seven early Christian basilicas and the fact that Delos is referred to as the bishop’s base. Though, it seems that after the 7th AD c. it was completely deserted and for many centuries it has become a pirates shelter.

The island woke up and came out of its absence when the French Archaeological School began excavations in the archaeological site in 1873, revealing the rich history of the island throughout the world.

The unforgettable and magical experience begins at the archaeological site, with the paved square, the Market of the Komettalists of the 2nd century BC, surrounded by temples, where the rescued buildings, south and east of the square, are memories of shops.

Next, is Lion’s road with the marble lions of the 7th century BC, built as thanks to God Dionysos for some benefaction by the inhabitants of Naxos. The lions standing on Lion’s Street today are imitations of the authentic ones, as the genuine marble lions are kept in the Archaeological Museum. 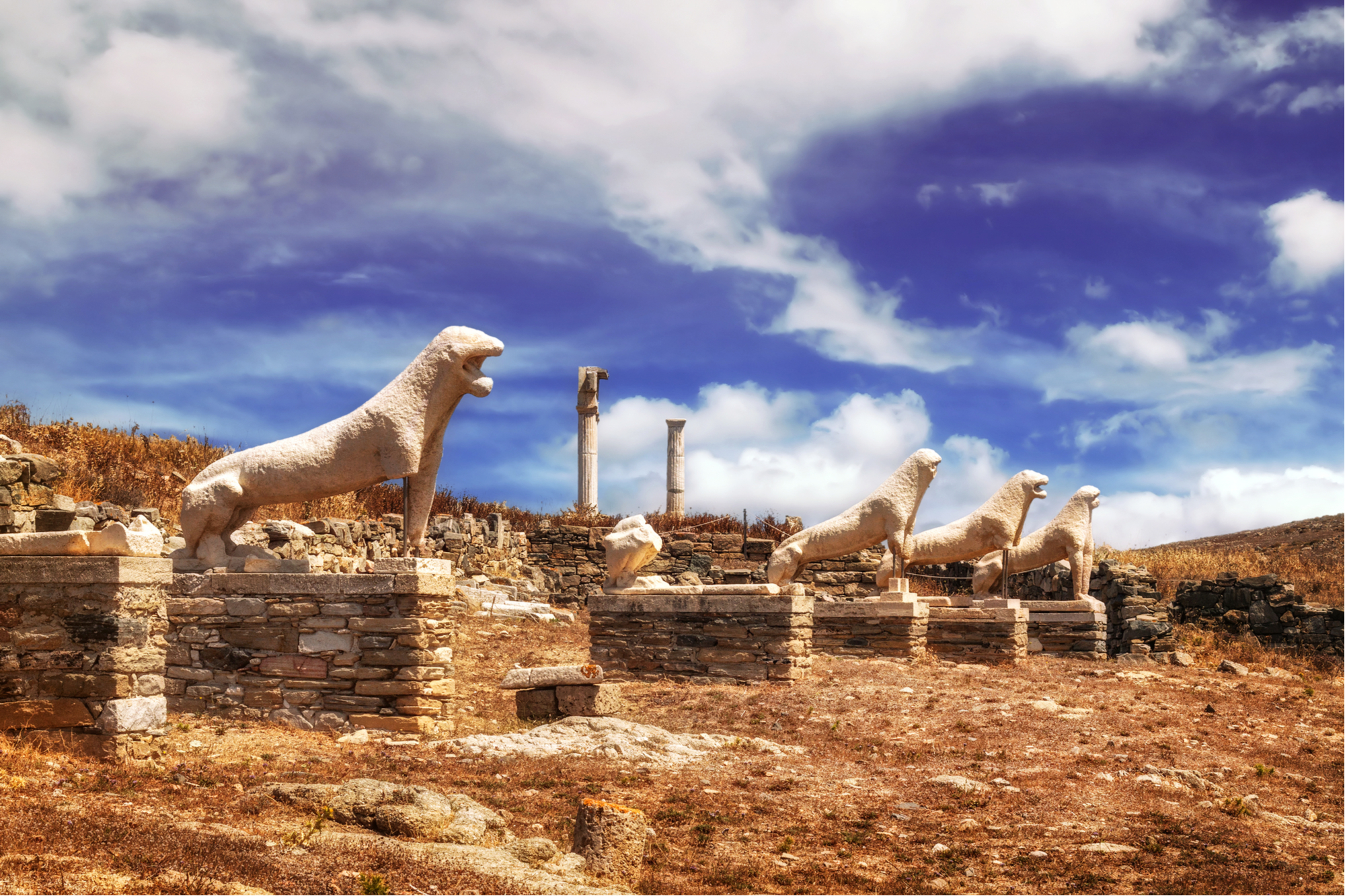 The Archaeological Museum of Delos, one of the most important in Greece, impresses with one of the best collections of ancient Greek sculpture in the world. In the nine chambers ancient sculptures, mosaics, vases, inscriptions, jewels, tombstones and columns are exhibited, while the trunks of the Kouros from the Sanctuary of Apollo, the statue of Dioscorides and Cleopatra and the marble complex of Voreas that grabs Oreithia stand out. 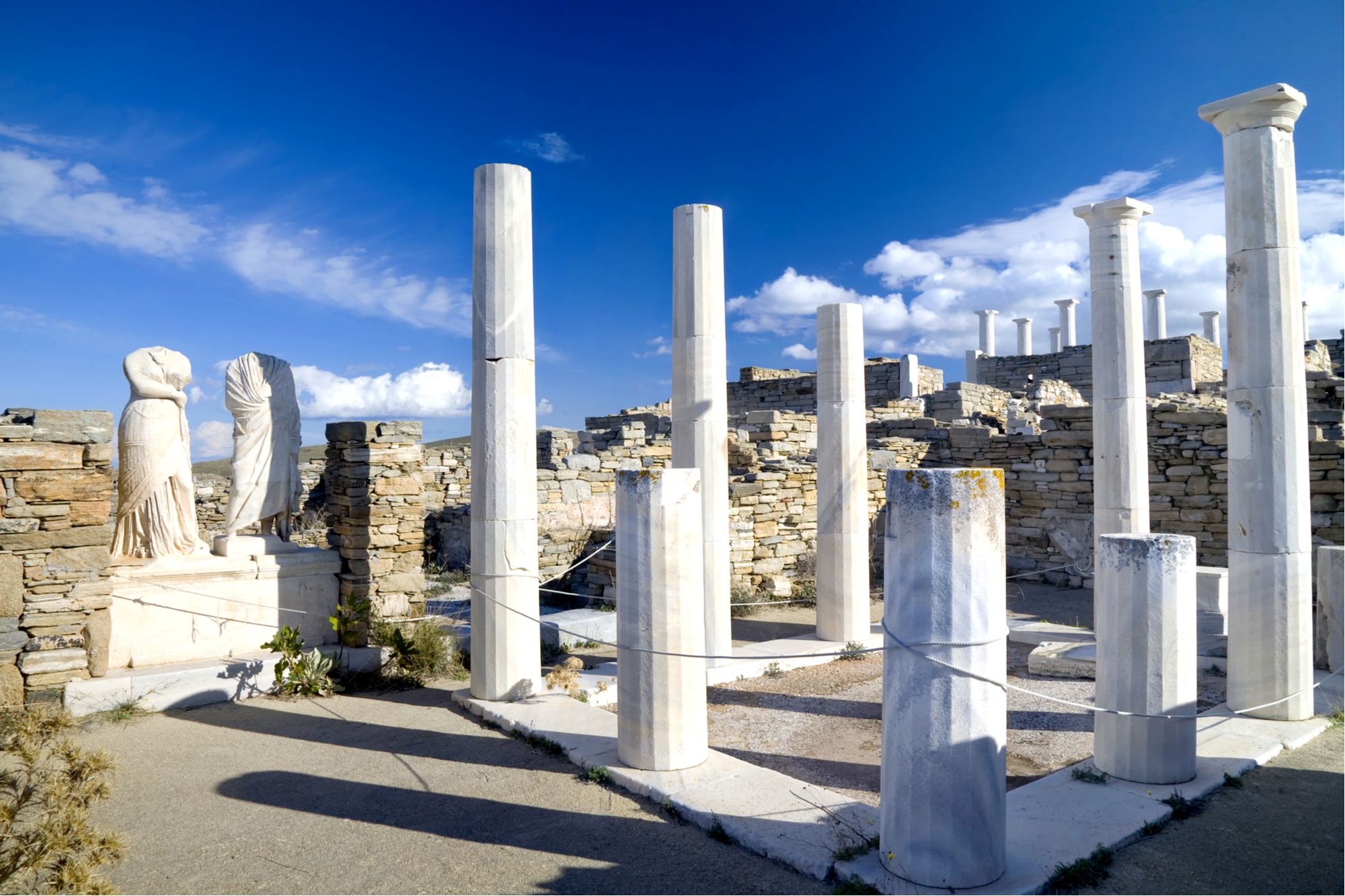 The tour is transported to the original Ancient Theater, which could serve over two and a half thousand spectators and was replaced with the present stone at the beginning of the 3rd century BC. The experience is fascinating since when the visitor stands its center, they almost relive the performances of the past.

Of interest is the fact that although a large amount of marble was transported to neighboring islands to be used as a building material, 4,000 architectural members with a total weight of 30 tonnes were recorded in the interior and surrounding theater. 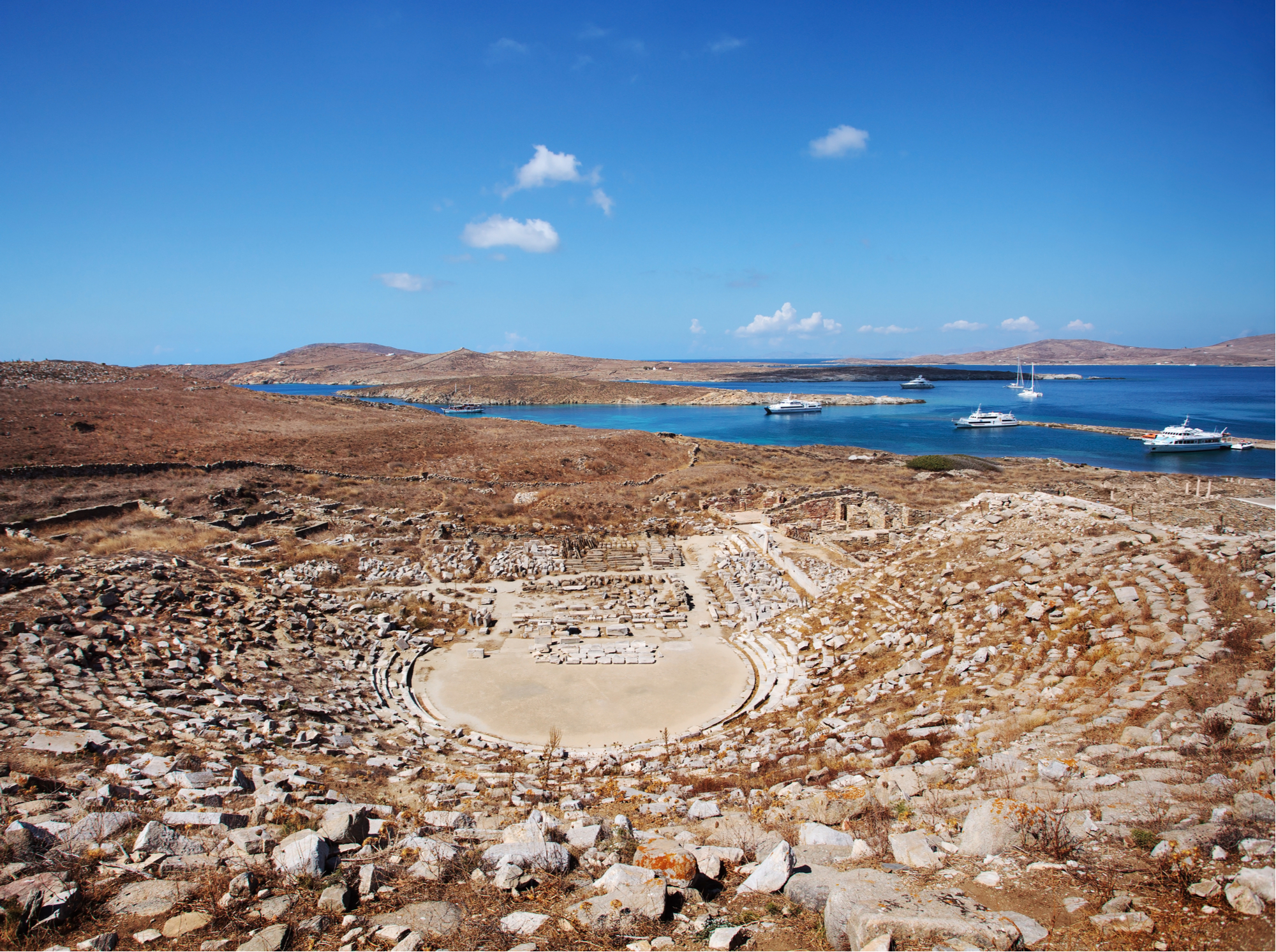 The entire district has ancient, private residences, while the route that visitors cross through between the luxurious houses – like the house of Dionysos – to the ancient theater, is called Theater Quarter, where are many of the treasures of the archaeological site of the island, such as the house of Cleopatra and Dioskourides (2nd century BC).

A jewel is also the small Doric temple of Isis, the patron saint of the sailors, located in the Sanctuary of the Foreign Gods, at the foot of Kynthos, built at the beginning of the 2nd century BC. and was repaired by the Athenians in 135 BC. Inside the temple, the statue of the goddess, who gave good health and luck, is still preserved. In the archaeological site of the “Cycladic priestess” is the famous mosaic in the house of Dionysus (2nd century BC), a mosaic depicting the god Dionysus with open wings, crowned with ivy. 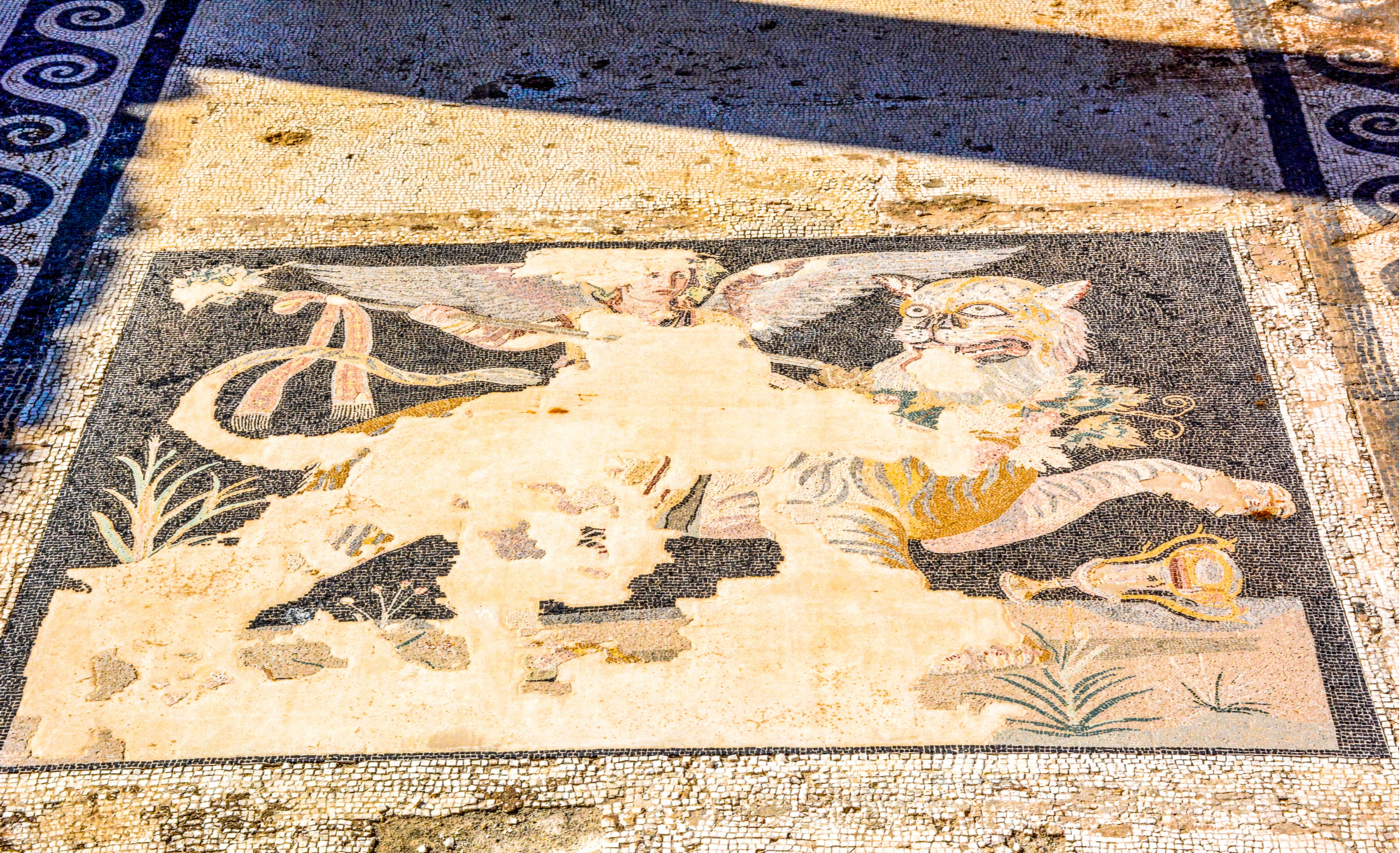 Climbing to Kythnos, the highest hill of Delos (133 meters) and the center of the Cyclades, it takes 20 minutes, with an ancient stairway leading where the eye is enchanted and sails in the blue of the Aegean Sea and the imaginary circle that the visible islands which surround it form.

Among the ancient temples of the island with a wealth of finds is the Doric temple of Hera, built around 500 BC. Under its cella, remains of an earlier temple of the early 7th century BC were found. and many archaic pots, many of which have engraved votive inscriptions. To the south, it is worth visiting the altar of the wedding goddess. 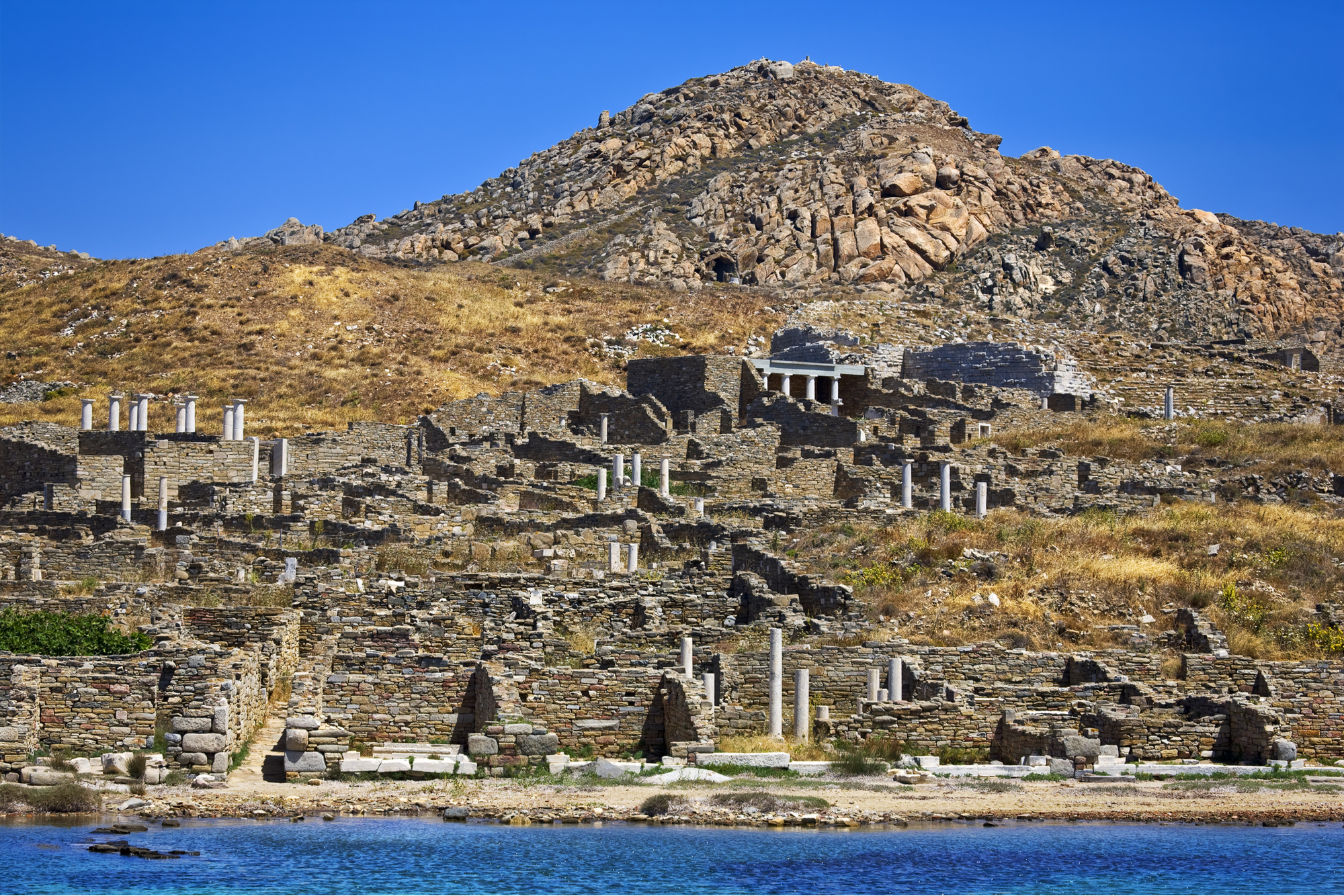 The last and largest of the three temples of Apollo is the one of the Delians or the Grand Temple, a Doric temple with six columns on each narrow side and 13 columns in each long. Its construction began in 478 BC but was interrupted around the middle of the 5th century BC. when the Athenian Alliance fund was transferred to Athens, and continued in the short period of Delian Independence without ever being completed. 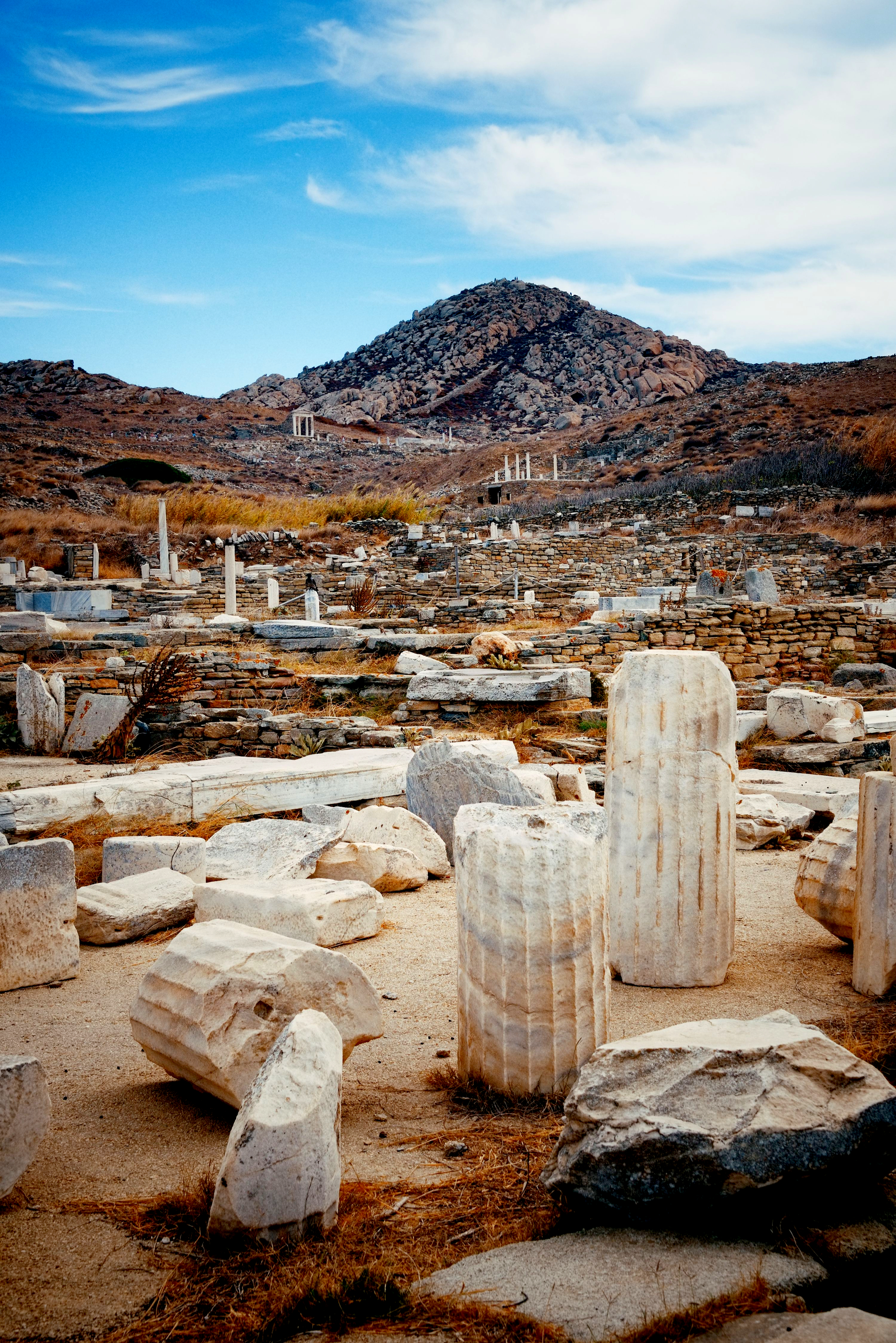 One narrow width of one kilometer divides Delos from Rhenia, an island with many bays, coves and deserted sandy beaches, five small churches and scattered farmhouses, an unforgettable destination for those who visit it.

Delos is unique throughout the world as the largest natural archaeological site of such great importance, as no other island houses so many monuments of Archaic, Classical and Hellenistic times. 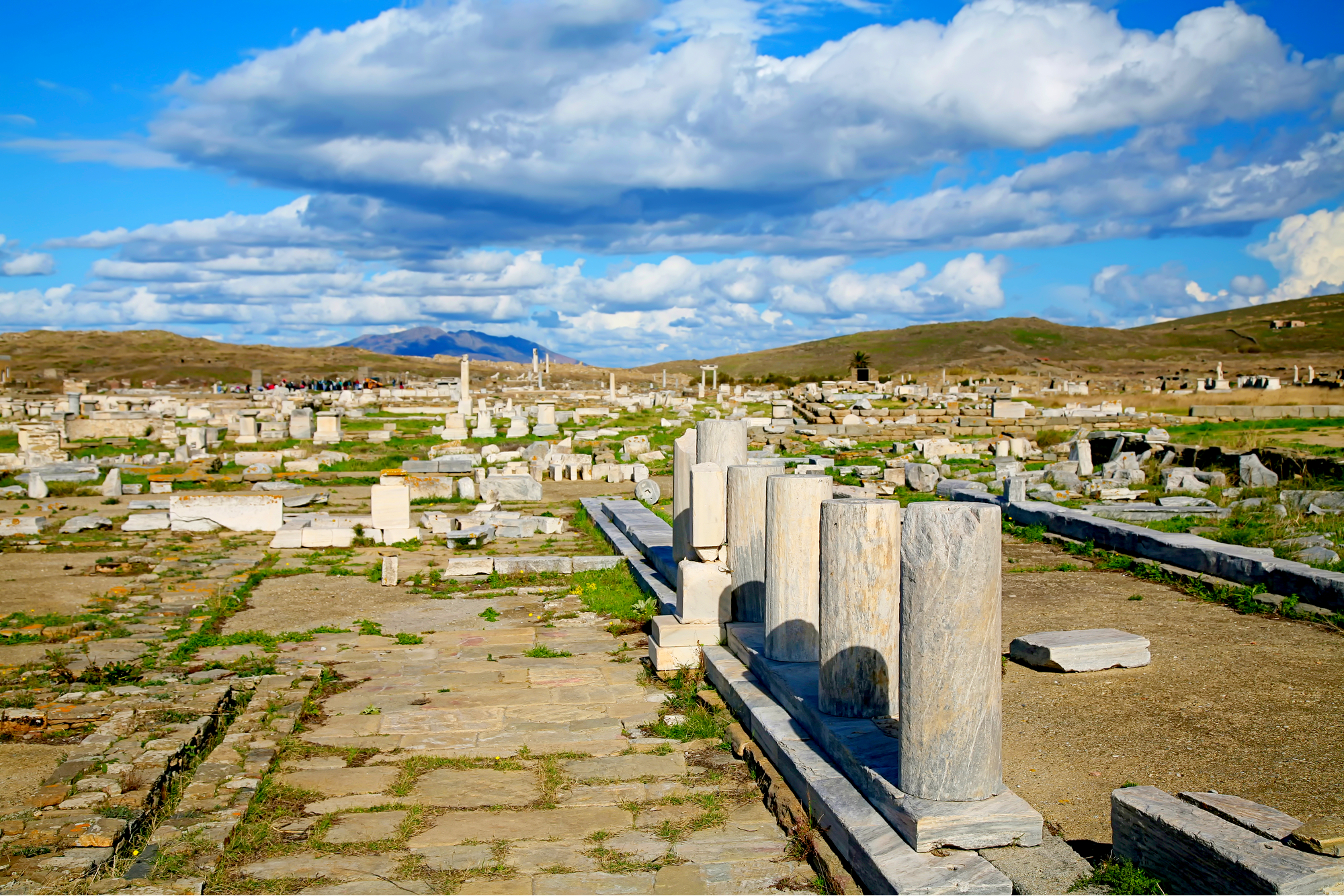 Since 1990, the island has been declared World Cultural Heritage and is protected by UNESCO. For this reason, it is forbidden to dock boats and to stay overnight without special permission, while visitors arrive there from Mykonos and during the summer months, boats connect the island with both Tinos and Naxos. 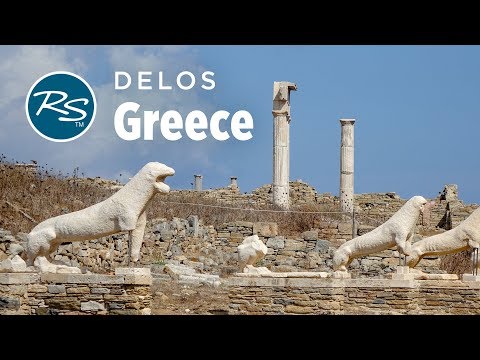