The Greek village of Florida

Tarpon Springs is a town in the USA, located in Pinellas County, Florida. In the 2000 census it had 21,003 inhabitants, and in 2004, according to the US statistical office, it had a population of 22,554. Tarpon Springs is known for its significant presence of Greek Americans, which is stronger than any other US city. An 11.8% of the total population were identified as Greeks, while an 8.87% said they were speaking Greek at home.

The area, made up of a series of bays in the Gulf of Mexico, attracted interest for the first time in 1876 as a place of winter residence. Some of the very first visitors who came there, noticed the fish in the area jumping over the waters and consequently named the location Tarpon Springs. 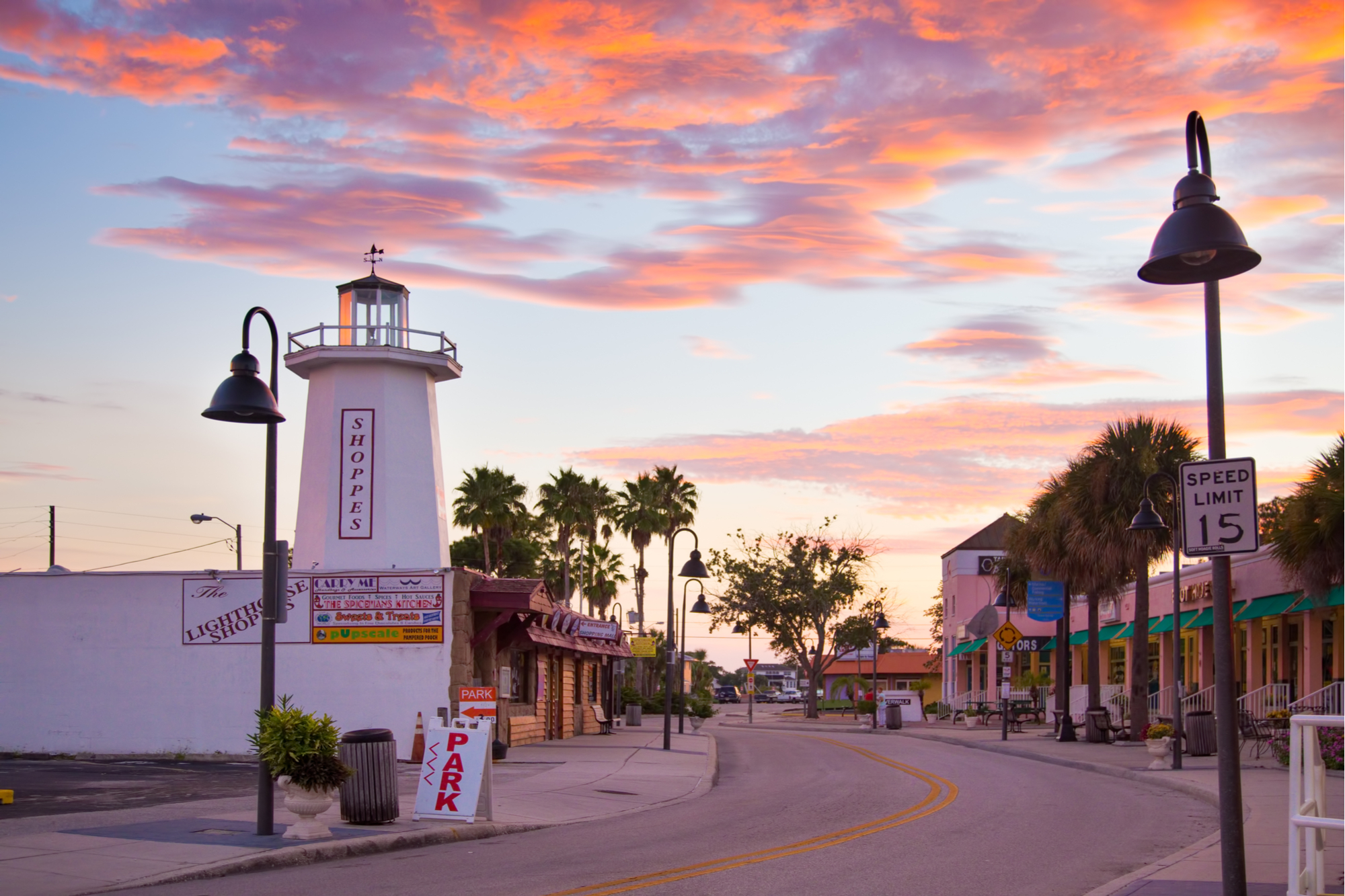 The first Greek immigrants arrived in the city during the 1880s to work as a sponge divers. In 1905 Giannis Kokkoris presented the technique of sponge collection in Tarpon Springs. Kokkoris brought sponges from the Dodecanese and Halki, resulting in a 1930s thriving sponge industry in the city, which earned millions of dollars each year. 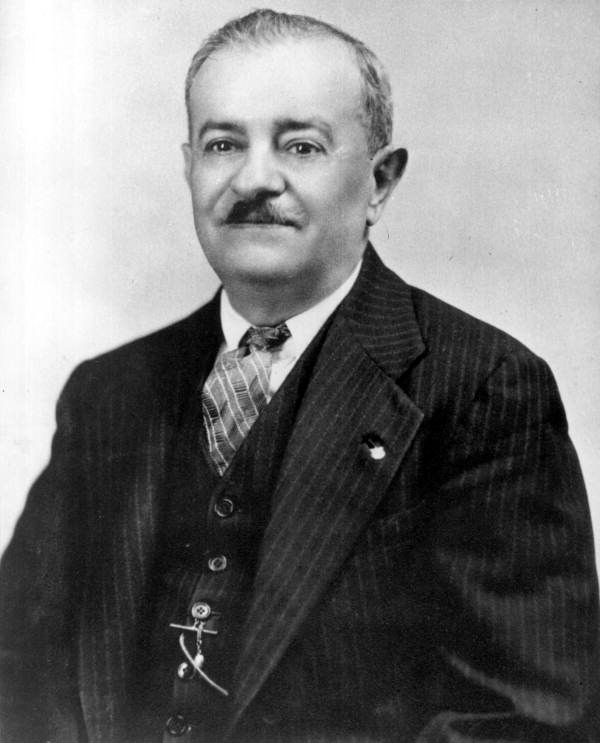 In 1947, the red algae epidemic, which destroyed the sponges’ habitat, arrived on this side of the Gulf of Mexico. Then, having no other choice, the sponge divers became shrimp fishermen and sailors as a way of living, while others left the business. The city gradually turned the sponge-fishing activities into a tourist attraction. The sponge dock now has mostly souvenir shops, restaurants, and museums that highlight Tarpon Springs’s sponge diving past. Sponges are also being sold.

In the late 1980s, a serious attempt was made to revive the sponge fishing in the area by businessman George Biliris and it had impressive results. Indeed, in the autumn of 2007, a new sponge fishing record for one boat was recorded. The sponge fishing industry remains active in Tarpon Springs until today. 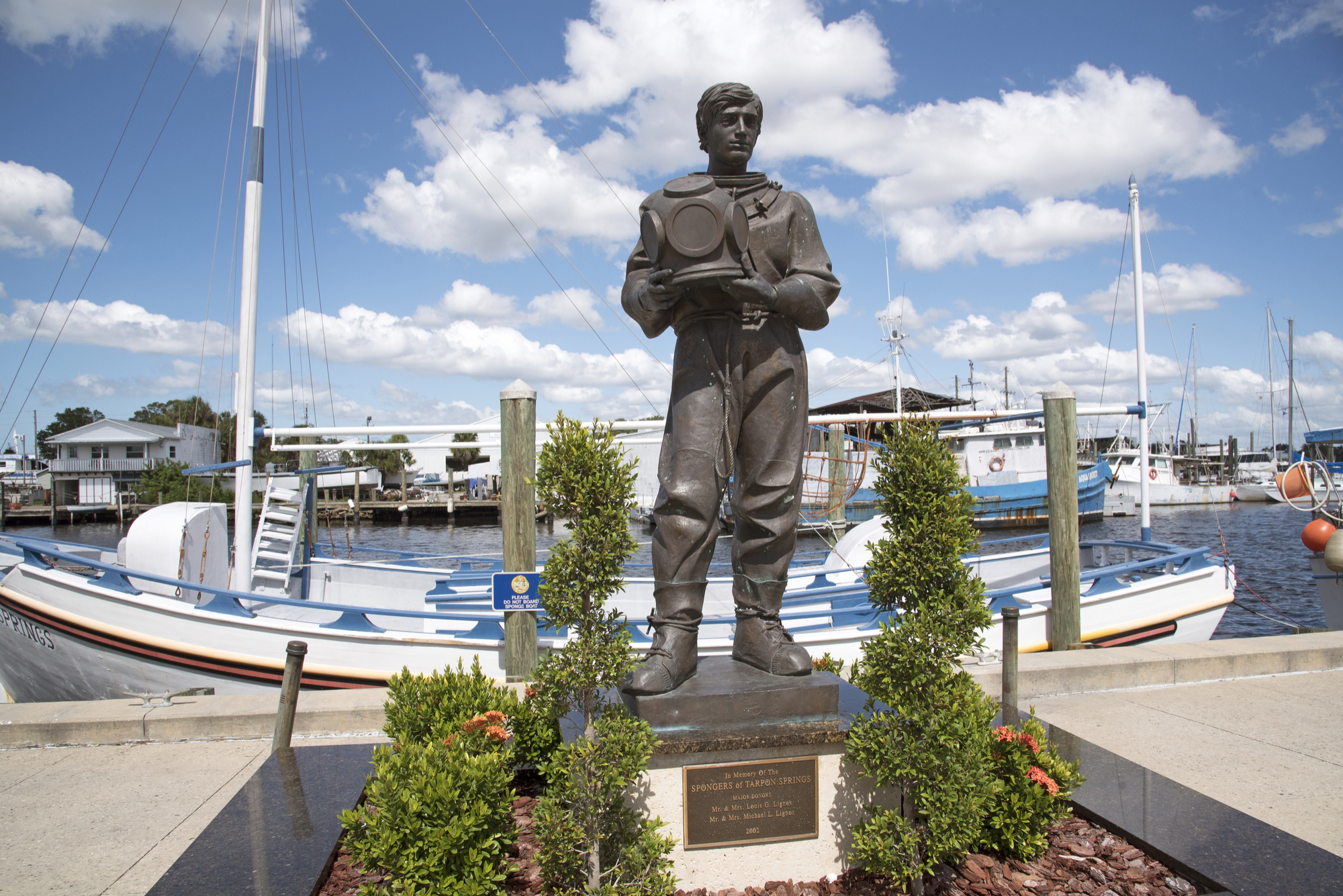 The current Mayor of Tarpon Springs is Mr. Chris Alahousos, who was born in Kalymnos and emigrated with his father to the United States when he was only 14 years old, and claims his re-election for a second term in the March 2019 elections.

His opponent is the former mayor of Tarpon Springs, David O. Archie, who was succeeded in 2016 by Mr. Alahousos. In the past three years, Mr. Alahousos has been presenting significant and substantial work for the benefit of the city’s residents, and is ready to continue with many other projects. 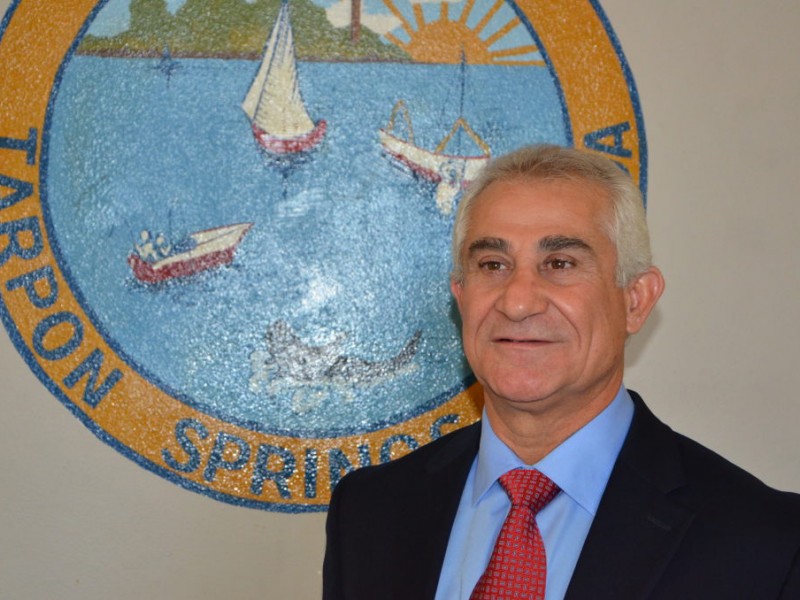 The events that have so far been made by Mr. Chris Alahousos as part of his election campaign have been very successful and involving for many people. Everything indicates that he is supported by the majority of the inhabitants of Tarpon Springs.

At the heart of the cultural and religious life of Tarpon Springs is the Cathedral of St. Nicholas, which houses about 800 families. The most celebrated religious feast is that of Epiphany, on January 6th, during which the watering of the waters and the caiques takes place. It is a ceremony that has its roots at a time when sponge bush still boomed and fishermen were praying for God’s help in the dangerous profession they were practicing. 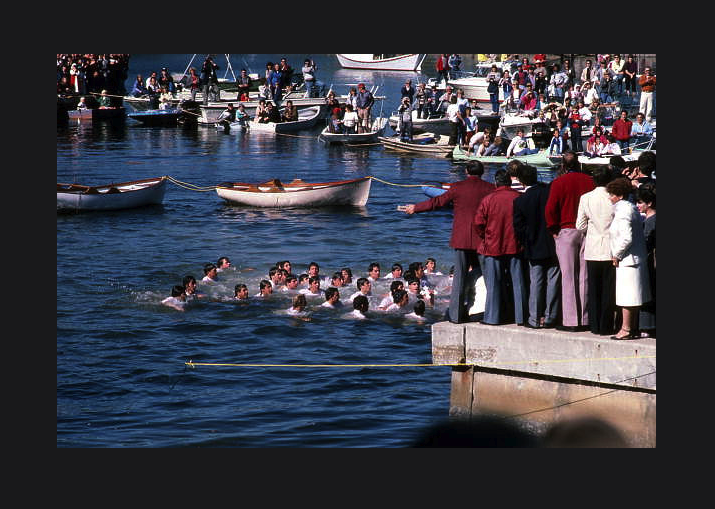 The celebration attracts a number of Greek Americans from all over the States, so the town’s population is known to triple in size for that day. Usually, the presiding priest is the Metropolitan of Atlanta, and occasionally the Archbishop of America participates. The ceremony takes place as in Greece, with the priest throwing a wooden cross into the sea and swimmers diving to catch it. Anyone who achieves it has its blessing for next year. After the sanctification, the celebration is taken to the waterfront where music events take place, followed by a meal and a party.

In 2006, the 100th anniversary of the establishment of sanctification in Tarpon Springs was celebrated, and the Ecumenical Patriarch of Constantinople Bartholomew was celebrating, honoring the historical Greek-Orthodox community of the United States. 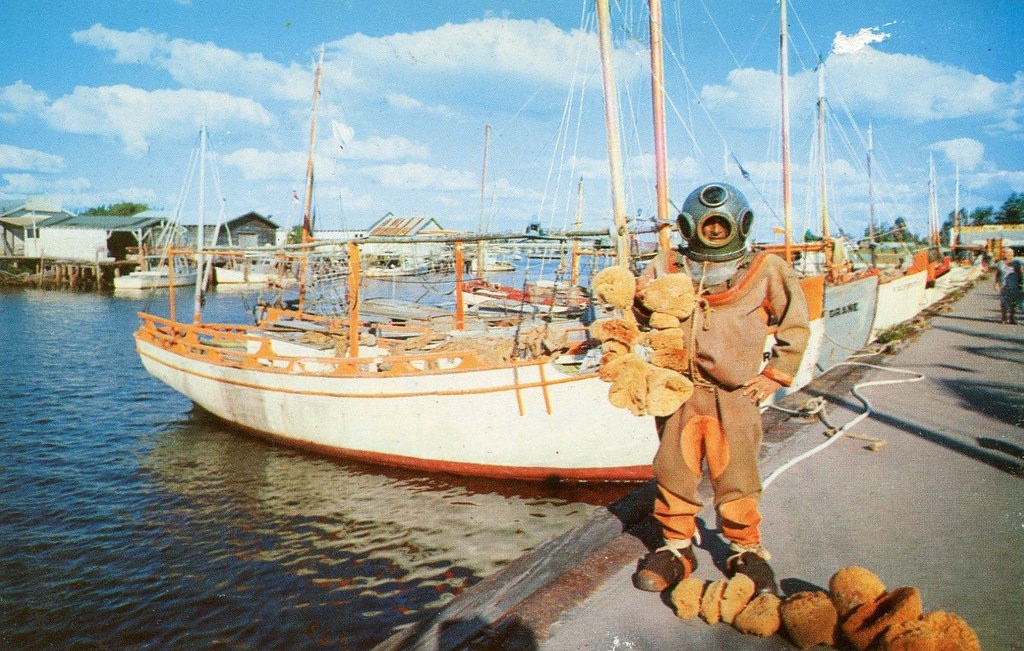 In 2007 and 2008, the City of Tarpon Springs established Sister City relationships with Kalymnos, Halki, Symi, and Larnaca, Cyprus, honoring the close historical link with these Greek-speaking islands. 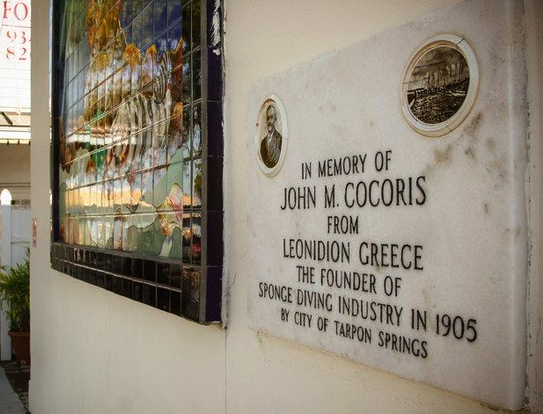 In 2014, the Greek district of Tarpon Springs, which was a trade center for the first Greek immigrants since the early 20th century, was declared Traditional Cultural Property and is the first Florida area to win this distinction. 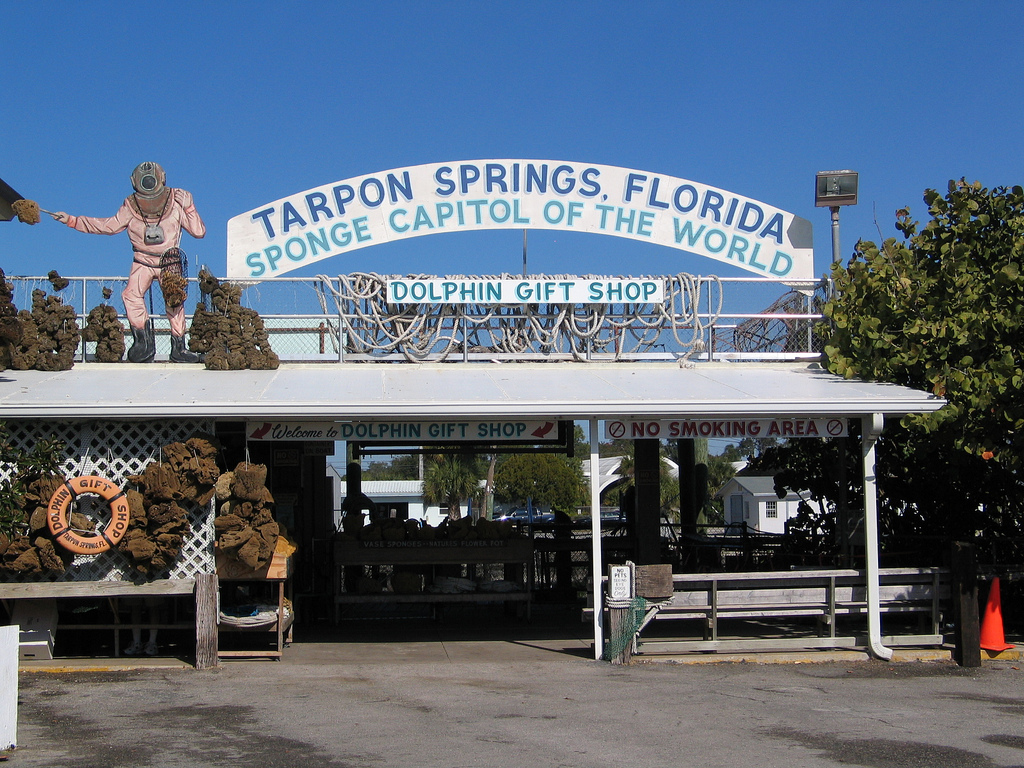 The status of traditional cultural property was given after a decision by the National Park Service and practically means that residents will be encouraged to renovate their homes according to their traditional architecture.

Tarpon Springs is undoubtedly one of the most important areas developed by Greeks in America, beyond the borders of our homeland in general. The rich heritage of sponge divers has become a unique tourist attraction and in recent years Tarpon Springs is a pole of attraction for thousands of tourists who rush to see the sponges, learn the history of the place through the legendary stories of sponge divers and walk in the streets of the “American Dodecanese”, a Greek village in Florida. 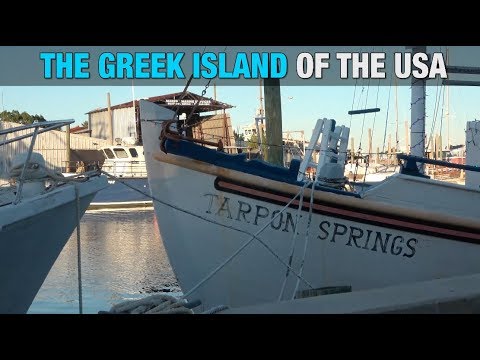