A world which has to be discovered

The Greek land is jeweled with caves, the number of which exceeds the 8,500. The environment enchants the visitors with its interior, complex decoration. Stalactites and stalagmites of incredible beauty, an “architectural” structure that creates chambers similar to royal palaces, crystal and mysterious underground waters create unprecedented underground landscapes.

The important geological processes have endowed the hills of the Greek land with real monuments of nature, full of charm and mystery. Some of these caves are world-famous for their important anthropological finds.

Many of these were the shelter of the early man, while others were great places of worship. The power of nature, as it is manifested in silence and unseen by human observation, has enchanted all cultures. Great chthonic deities were considered patrons of the caves in Greece, such as the mythical “Pories”, beings with great intelligence and somatic features from both human and serpentine nature.

Some of the most beautiful caves in Greece are:

It is located just 5 km from the center of the city of Ioannina, with its feet bathed in Lake Pamvotis in Ioannina and is the largest cave in Greece with 4.8 acres and a 6th long corridor with 1,700 meters. It is geologically connected to the presence and development of Lake Pamvotis. It dates back to about 1,500,000 years and was part of a riverbed when the waters of Lake Pamvotis covered the entire basin of the city of Ioannina and the Goritsa hill was an islet.

The first modern references to the existence of the Cave date back to the Second World War, when Perama residents found shelter from the bombings. It consists of several successive halls and corridors decorated with stalactites, stalagmites, curtains and impressive columns in marvelous clusters. The indoor temperature is 18 ° C, while the humidity reaches 100%. 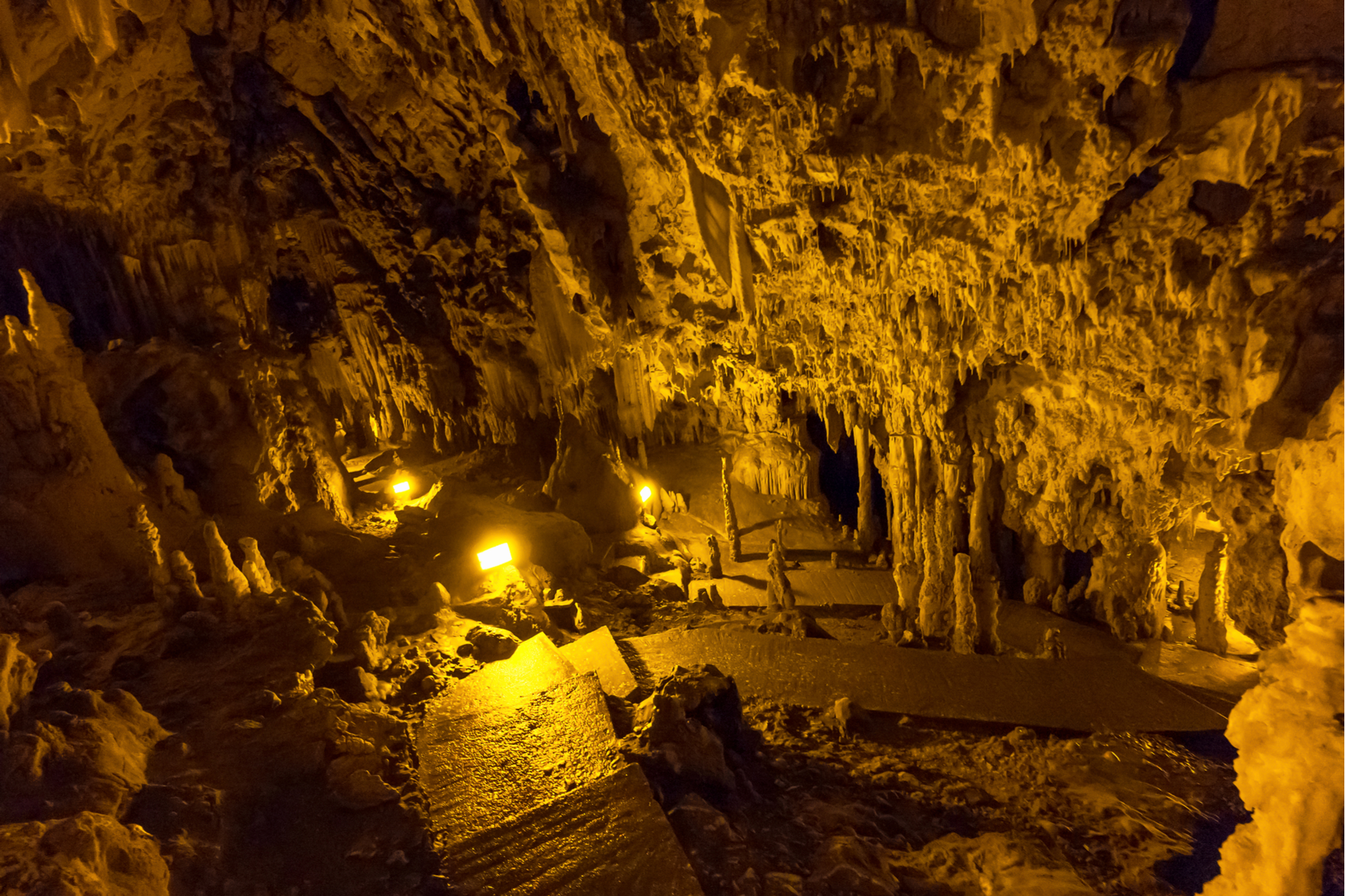 This is a unique geological phenomenon. The Melissani Lagoon is located 2 km northwest of Sami. The natural entrance of the cave is vertical (40 × 50 m) and was created by the fall of a section of the roof. However, there is an artificial stair entry that allows a visit to the cave, which was discovered in 1951.

The lake is 20 m below the ground, it is about 160 m long and the water has a depth of 10m to 40m 20,000-year-old stalactites with strange shapes embellish most of the cave. In the center of the lake there is a small island, on which finds were found which prove the worship of the cave as, in antiquity, the prehistoric inhabitants worshiped God Panna and the presence of female figures, the known Nymphs. For this reason, the Melissani cave is also called Cave of the Nymphs. 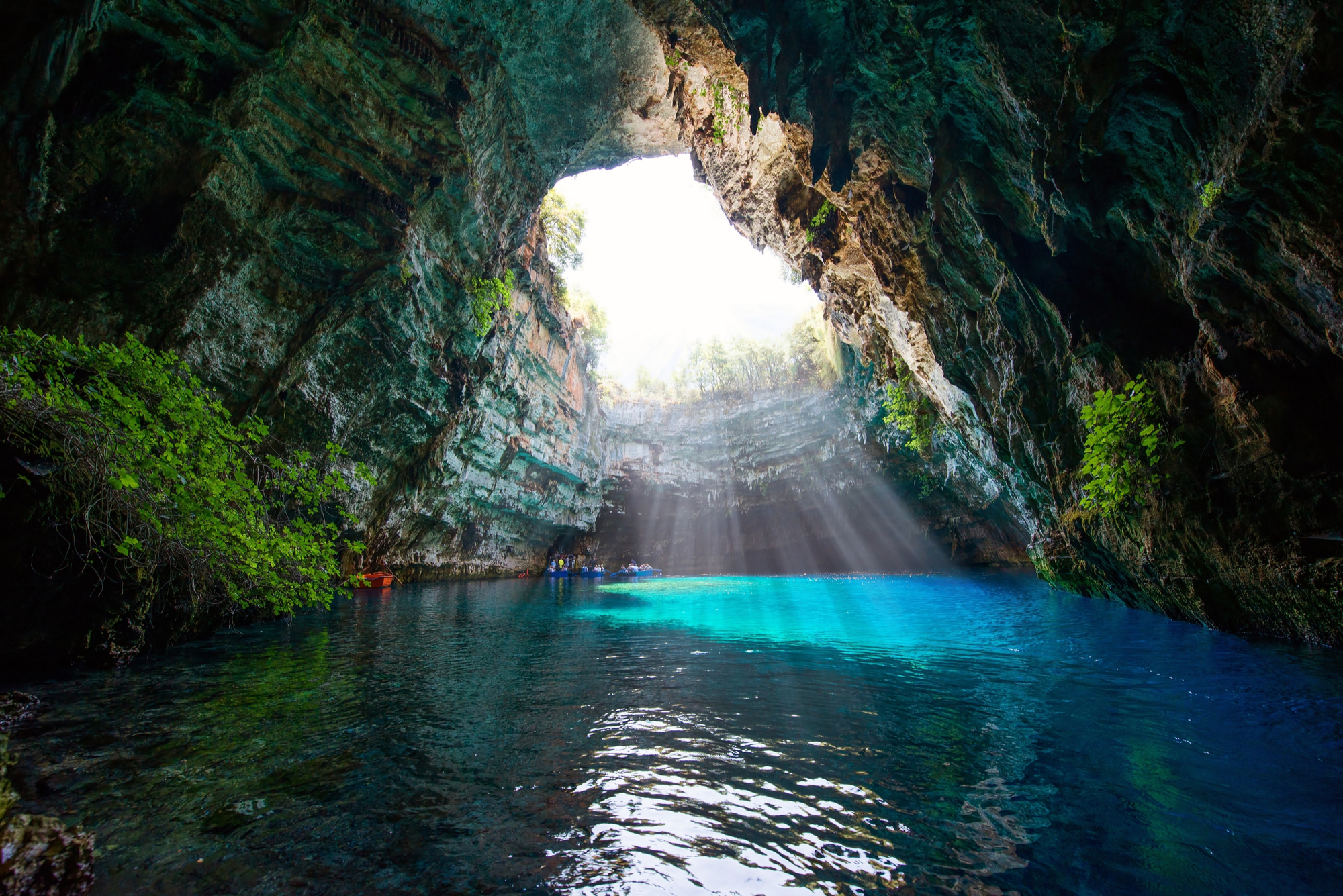 The conditions inside the cave due to humidity and temperature are ideal for Dikteon to be an important habitat with a rich fauna. In the entryway, wild pigeons and other varieties of birds nest, while, deeper, species from arthropods and the Mediterranean Ear Bat live. In the antechamber of the Dikteon were found the foundations of the altar and articles of offer, and as one descends inside the Dikteon, they will see the ancient surrounding wall of the mosque, the sacred place.

Internally, it consists of 5 larger and smaller chambers. The most impressive point is the lake which is surrounded by huge stalactites and stalagmites and lies at the lowest level. In the lake, there is also the “Zeus mantle”, a stalactite, like a chandelier hanging over the lake and its shape resembles a mantle to the imagination of the locals, which is charged with centuries of myth. At the back of the lake, it is easy to distinguish a small apartment of the Dikteon, where they say that the father of the gods was born. 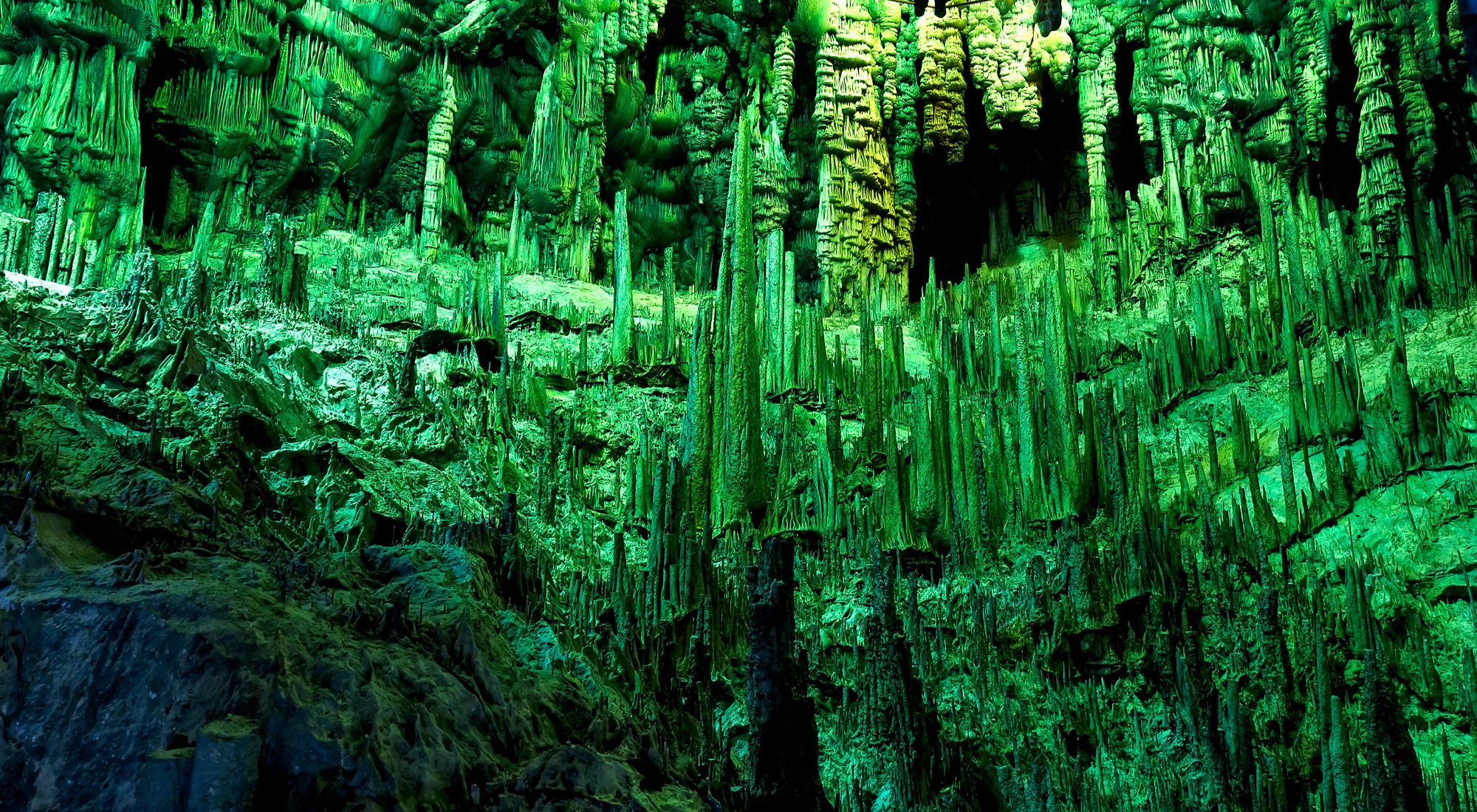 Nature needed three million years to create the unparalleled gothic decoration and to make bodies and shapes of a fancy fantasy. Among the giant red and white “waterfalls”, giant multi-faceted columns, “curtains” and “bed sheets” that populate like candles from the roof, ‘animals” and “monumental creatures” nest. Rare presences, such as discs, flat stalagmites, eccentrics and helicities, have their special place in the cave, while their permanent resident is the blind and deaf sloth.

Within the limestone of Jurassic age (195 – 145 million years) “Tripoleos” section, the caving took place over 3 million years ago, after a period of geological turmoil which an active period of drip and chemical sedimentation followed. The area of the cave is 1500m2, divided into two levels and the visitor walks it with a 500m route. Its exploitation works were made in complete harmony with the external natural environment and the internal interventions were characterized by the Ephorate of Palaeoanthropology – Speleology as “excellent in every detail”. 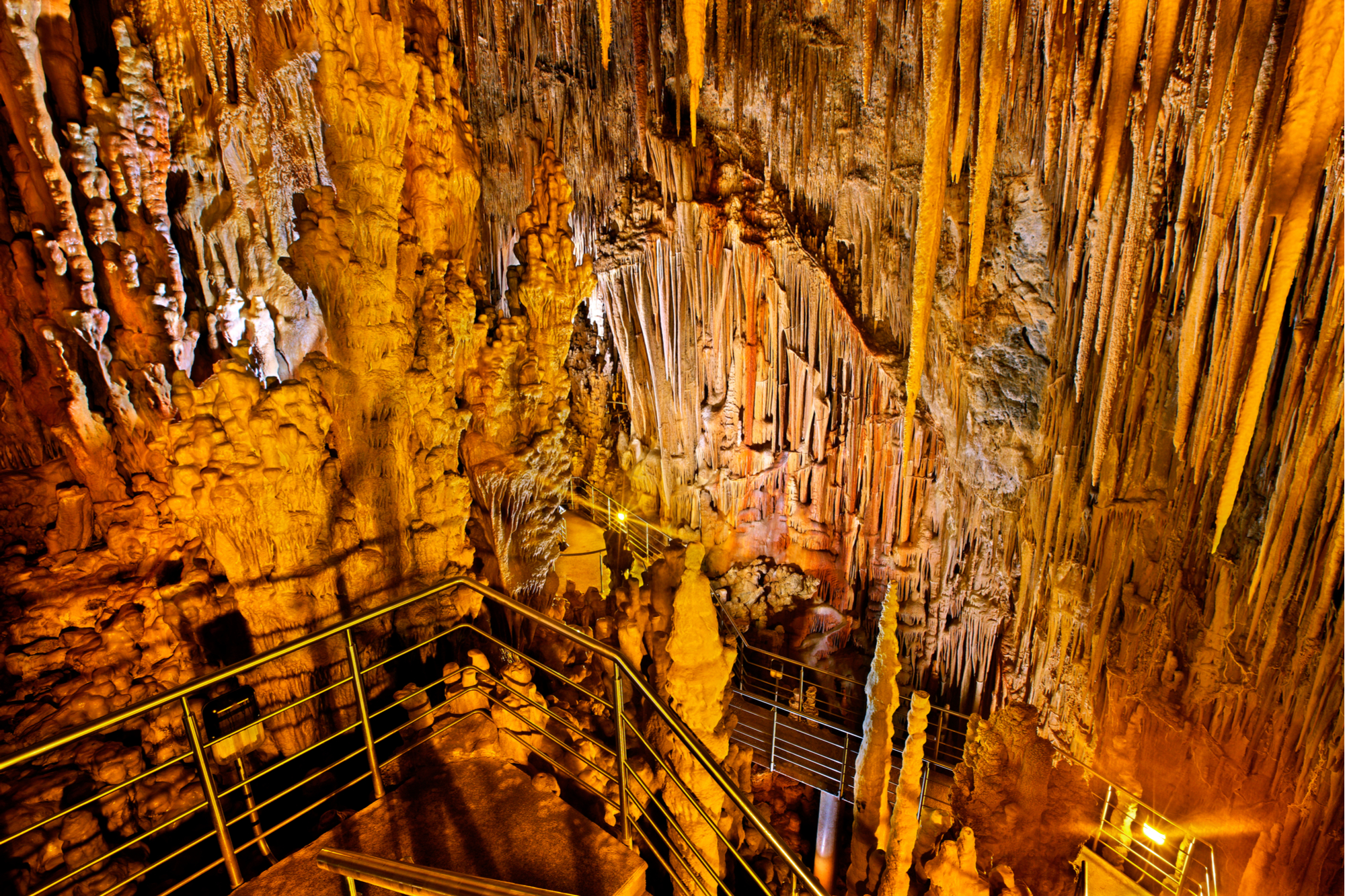 – Cave of the Lakes, Achaia

The “Cave of the Lakes” is located near the village of Kastria of the Municipality of Lefkas Achaia and is a rare creation of nature. In addition to the labyrinthine corridors, mysterious arcades and strange stalactites, it has something of its own; the successive stepped lakes (spread over three floors) that make it unique in its kind in the world.

The exploited length of the cave is currently 500 meters and the visitor enters the cave from an artificial tunnel, which leads directly to the second floor. The dimensions of this section cause awe, ecstasy and admiration. The passage of the lakes is made by elevated artificial bridges, while fossilized bones of humans and various animals, including the hippopotamus, were found on the lower floor of the cave. This section is intended for a biosphere laboratory of international projection. 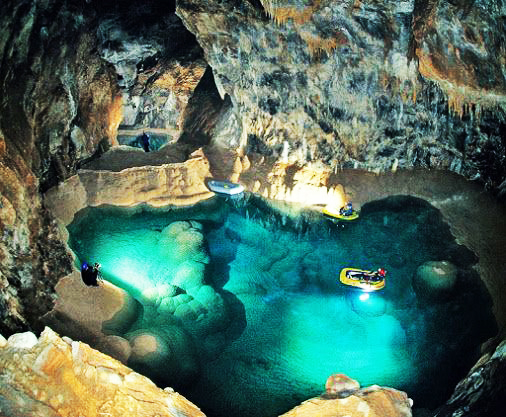 Twenty-five km. from the city of Drama, is the largest in length and volume cave of Greece. It is the cave of Maara, (known as the Cave of Aggitis springs) at the southern foothills of Falakro, where the frozen river Aggitis springs from the thickets of the earth. The cave was discovered in September 1978, while its roof is full of stalactites, some of which have a diameter of 2 m and reach the surface of the water. Their colors are amazing and are due to the presence of ores (manganese, iron, copper, etc.).

The prehistory of the cave begins 30,000 years ago, while the excavations have brought to light stone tools and bones of prehistoric animals (rhinoceros, bigger, mammoth), some of which are exhibited today at the Drama Museum. In the “wheelhouse”, on a small plateau on the left bank of the river were discovered remains of the Neolithic Period (3.000 BC), while the “Acropolis” hall is impressive as well. It is the largest room discovered in a Greek cave (120 meters long, 65 meters wide and 45 meters high), which impresses with its size, decoration and the river that flows in it, creating underground banks and rocky formations, composing a real eerie scenery. 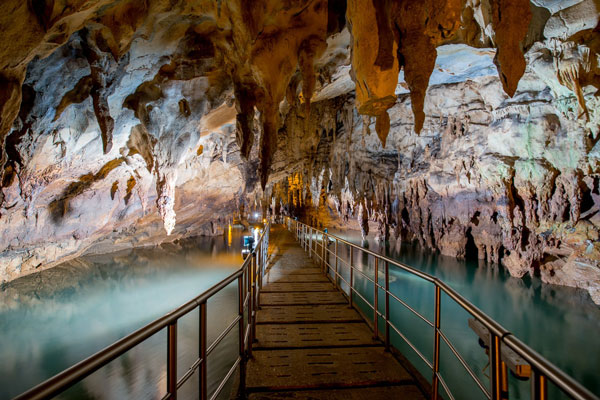 The cave Kapsia ] is located below the Mainalo Ski Center, 1500 meters from the village of Kapsia and was discovered in 1887 by the French archaeologist Gustavo Fuser. It has a length of 380 meters and its decoration is a rare, magnificent sight of a combination of colors, designs and natural complexes. To date, about 6,500 m2 of the cave have been the Neolithic period, traces of an old flood, human bones and skulls, as well as clay lamps of the 4th and 5th century AD.

Inside the cave, there are small and large rooms, multi-story corridors and unique clusters of stalactites and stalagmites that far exceed one meter. In the “wonders room” of the cave you can see a true forest of whitewashed stalactites hanging from the roof and colorful stalagmites in unique combinations of colors and designs. Pictures really spectacular that make it a cave of unsurpassed value and beauty. 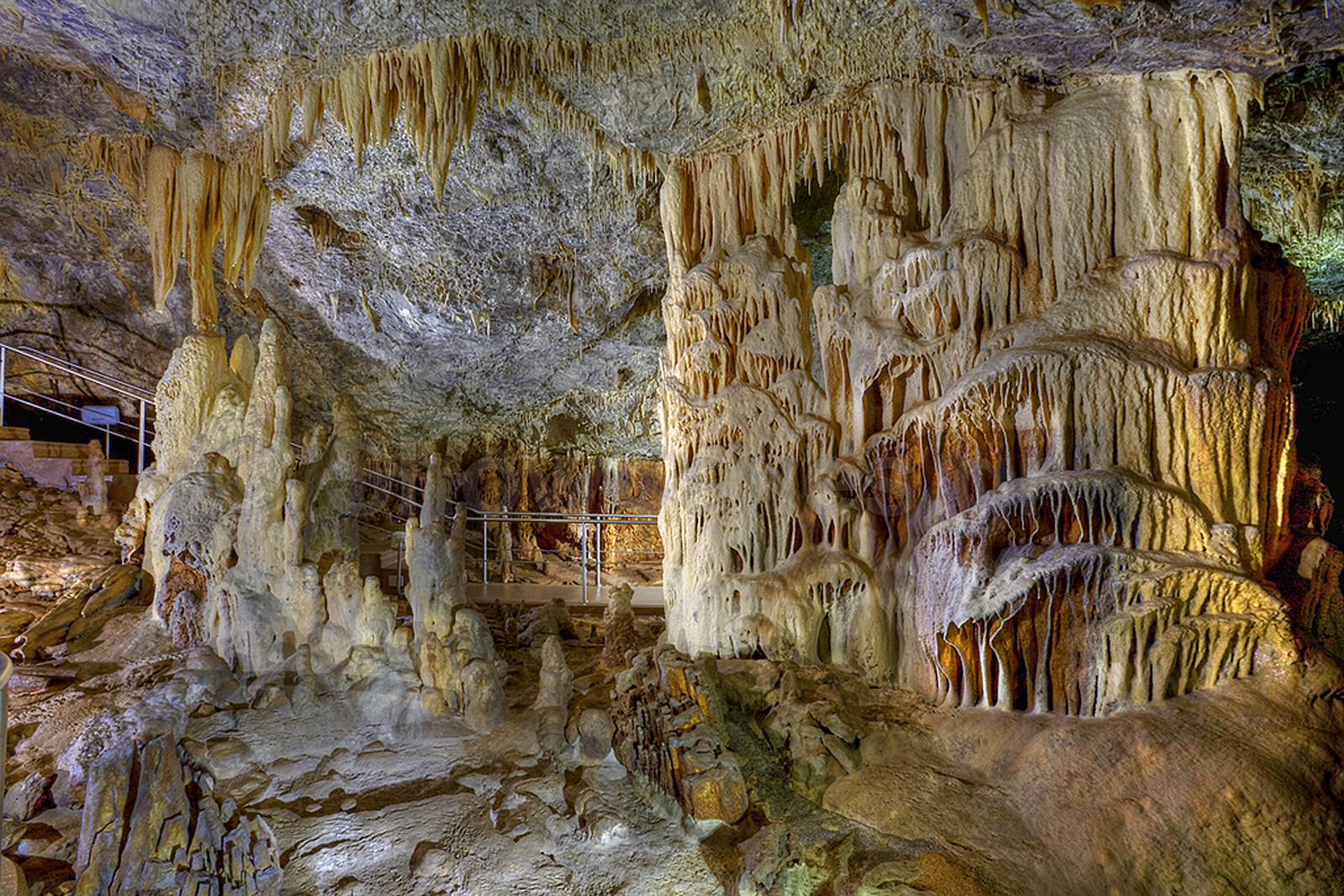 As one descends from Alistrati, the gorge that takes its name from the cave leading up to the Cave of Orpheus, they will find the Cave of Orpheus, a place with unparalleled natural beauty. Inside the cave, the slow but invincible power of the water has carved 45,000-year-old stalagmites in amazing formations. It is a horizontal, labyrinthine cave, with a total length of 300 meters and a width ranging from 20 meters to 30 meters.

Besides the natural beauty, the Orpheus Cave is a “treasure chest” that protects well-important secrets of human history. Surveys from the Ephorate of Palaeoanthropology and Speleology find findings in the cave that reveal that people lived there even 9,000 years ago. Inside the cave, except for objects of everyday use (tools, vases, etc.), human skulls and remains were found. Since the discovery of the Cave of Orpheus near Alistrati, it has drawn interest not only for its size and beauty but also for the importance of paleontological and archaeological finds it has been hiding for thousands of years and testifying to its role in the evolving history of man in Greece. 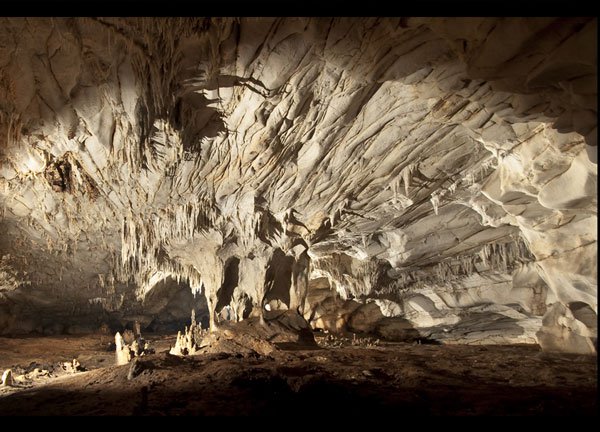