The island of infinite beauty

One of the islands with the richest historical wealth, with incredible natural beauty, the island famous for its architecture and the originality of its Cycladic beauty, which combines picturesqueness, gastronomy, folk art and tradition, all under the warm light of the sun and the majestic Aegean aura is Sifnos. With all the wealth it holds since the ancient times – when gold and silver filled its subsoil – up to the present day, in the form of a high level of tourist infrastructure, it is an excellent choice for the summer holidays. With its upgraded aesthetics and “Cycladic chic” style, and the low profile without eccentricities and exaggerations that calms the visitor, it offers plenty of relaxation and carelessness.

Visitors with archaeological interests will find their paradise in Sifnos, since they can visit ancient mines in the areas of Agios Sostis, Agios Sylvestros, Voreinos, Kapsalos, Xeros, Xylos, Ag. John, Apocofto. The silver mine at Agios Sostis is the oldest in the world (its early mining activity began from the early copper age, end of the 4th millennium BC).

The island is adorned with seventy-six ancient towers (6th-3rd century BC), due to the richness of the island in ancient times due to the gold, silver and iron of the Sinai mines. These beacons are spread all over the island in an impressive proportion of about one square kilometer. The ancient towers of Sifnos, which served either as defensive settlements or as communication points with the rest of the towers and the four ancient Acropolis of the island (through mirrors or smoke signals), have been revived with a revival of their communication by volunteers on the eve of Holy Spirit the last fifteen years. 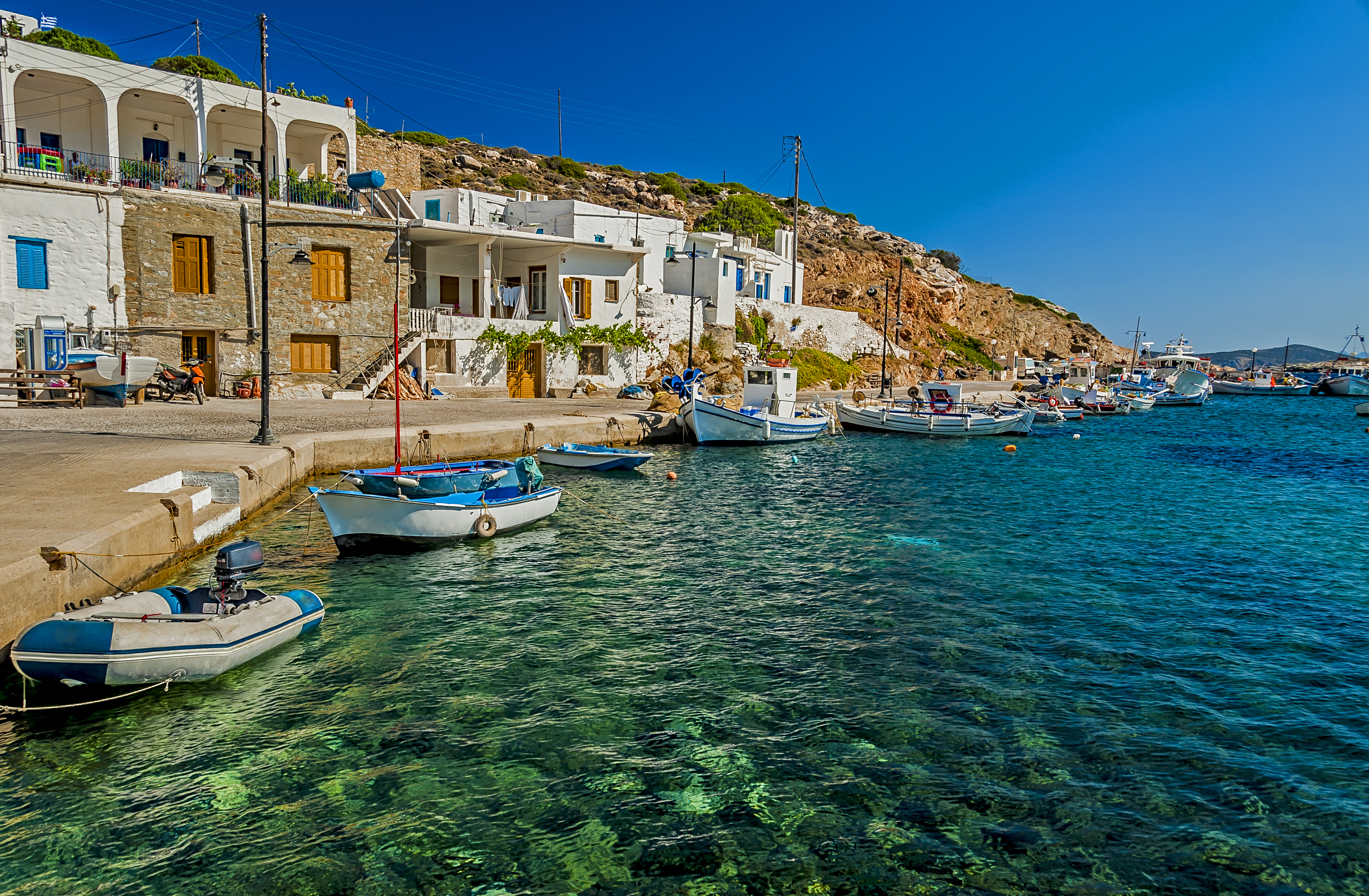 The well-organized, award-winning archaeological site of the island, which is stretching across the hill of Agios Andreas (or Ai Dria as called by the locals) in an area of about ten thousand square meters, is a definitely something one should see. The excavations that took place in the area brought the powerful majestic Mycenaean wall of the Acropolis (13th century BC) and the dense urban fabric to light along with a big sanctuary, buildings, streets, rainwater management works, as well as a plethora of small artifacts. The complete emergence of this stunning Acropolis of so many thousands of years, has shown in the brightest way the magnificence and vigor of the island. For the archaeological excavations and the emergence of the Mycenaean Acropolis on the hill of Agios Andreas, Greece was awarded in 2012 by Europa Nostra as a unique example of cultural heritage.

No matter how hard it is to believe it, there are 227 churches on the island. Of particular interest are all the churches of the Castle, as many of them and all of the monasteries have been characterized as historical monuments and have a huge historical and architectural interest. In most chapels and monasteries, traditional festivals are held at least once a year, with common dinners reminiscent of the ancient “estiasi” and the New Year’s “agapes”. They include traditional chickpeas and meat with spaghetti or potatoes, or horseradish with salad potatoes, wine, and traditional violin and lute music. The location to the west of Sifnos with its magnificent beauty and the church of Panagia Poulati is an area that attracts fanatical fans of swimming in its rocky waters and has been declared by royal decree as a “landscape of infinite beauty”.

The most distinguished village of Sifnos is the Castle, whose present form of the settlement is a specimen of a Venetian castle. It is built on an ancient city, the “city” mentioned by Herodotus, and is inhabited since antiquity to this day, being an open museum. The first row of adjoining two-storey or three-storey houses is the outer medieval wall where the folk class was, while in the inner row, located in the highest part of the castle, the aristocratic class lived to be more secure from pirate raids and looting. 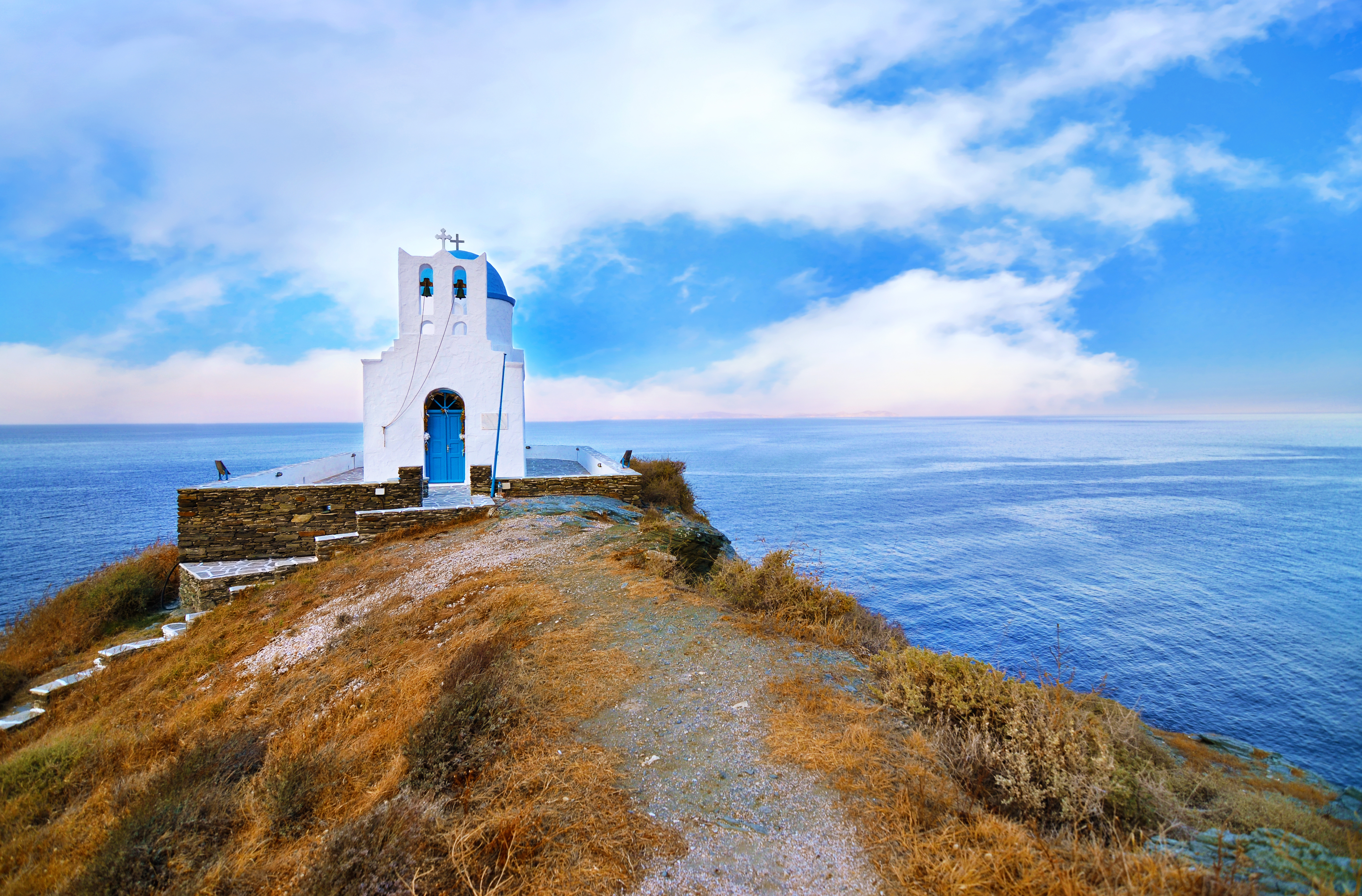 Today, the visitor enters the Castle through the old entrances, the “lozies”, which were sometimes secured and protected by war towers. Apart from the visit to the site, one has the opportunity to take a trip in time because during the trail they can see, over the ancient wall of the ancient Acropolis of the Castle, ancient columns and other ancient architectural members built in the buildings, Roman sarcophagi, Venetian atmosphere and architecture, Byzantine churches. At the entrance of the village, where the Castle’s cemetery and the churches of Agios Stefanos and Agios Ioannis (1629) are today, the famous School of the Holy Sepulcher (1687-1835), also known as the Archipelagos Educational School, used to operate.

The central settlements of Sifnos (Apollonia and Artemonas and their surroundings) have been declared and protected since 1962 as “spaces of special natural beauty”, while the exceptional aesthetic human creations are characterized by measure and plasticity and blend harmoniously with the natural environment. Some of the features of the Sifnian architecture are the white houses, the flat roofs which collect the precious rainwater in the cisterns, the “flaros” (clay chimneys on the terraces), the paved courtyards and the paths with the joints, the 40 windmills, 70 pigeons, 237 monasteries and country churches and of course 2500 km of “dry stone” (terraces).

Also, the dry stone walls that exist everywhere on the island serve both to keep the soil and rainwater in the fields and to separate the properties and are a giant deposit of thousands of people for centuries. Nowadays, students from America and Europe come to admire and study Cycladic and bioclimatic architecture in Sifnos. 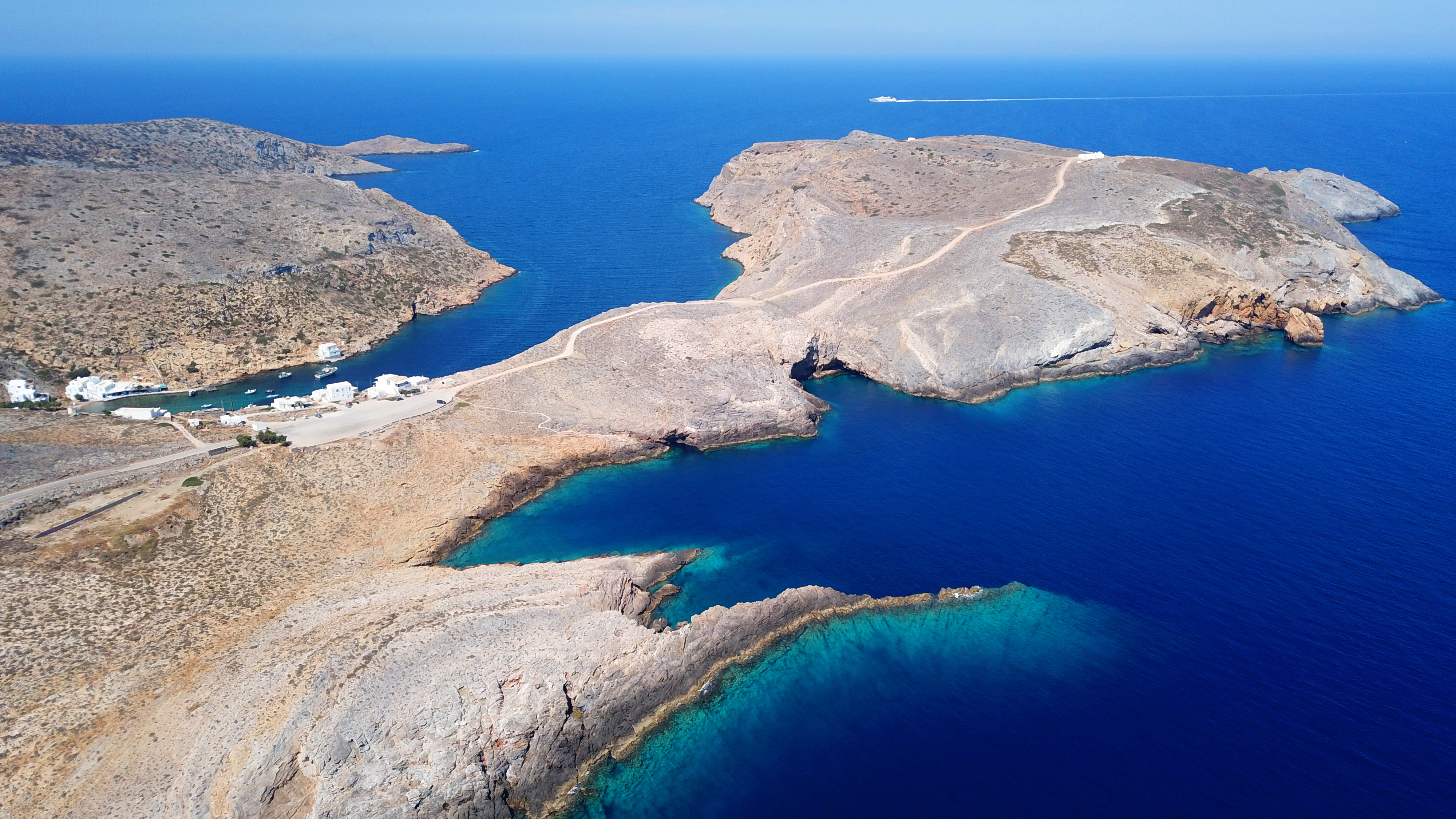 The paths, a unique network of 200 km of routes, were created for the needs of mainly rural and livestock life and were used daily. The oldest of them have a history dating back to the 3rd millennium BC. Nowadays, they continue to lead to churches, beaches and wonderful landscapes and are used by local and foreign hikers. Some of them are stone paved or formed by marble or soil. On every route, the hiker will meet monasteries and country churches, monuments of folk culture such as wells, fountains, cots, ancient towers, mines remnants, limestone kilns, mills and thousands of meters of dry land. Herbs, cedars, low vegetation and wildflowers, some of which are protected, have classified Sifnos among the 13 botanical paradises of Greece and can be found on every route.

There is a rocky islet cut off from the mainland and connected to the island with a small bridge. On top is the monastery of Panagia Chrysopigi (1650), the patron saint of Sifnos. Many legends are connected with the Monastery and the miraculous icon of the Virgin Mary. It is rightfully the most photographed point of the island and is characterized by royal decree as “landscape of infinite beauty”. An impressive feast is the Chrysopigi feast, with the boat line transferring the paintings of saints of Virgin Mary from Kamares to the sacred rock, attracting hundreds of locals and visitors and making it the biggest festival of the island and an unforgettable memory for those who have been present.

Sifnos constitutes the bastion of the development and spread of pottery in the Cycladic area – and not only. The first samples of pottery art date back to the Early Cycladic period (statuettes, decorative and utility utensils) and since then the art has spread and kept on. The good quality of the clay-mud and the love of the local masters for it has made Sifnos famous for the quality of its ceramics. On the island, there are at present 19 ceramic pots that visitors can visit, see the potters, create some and obtain decorative objects. 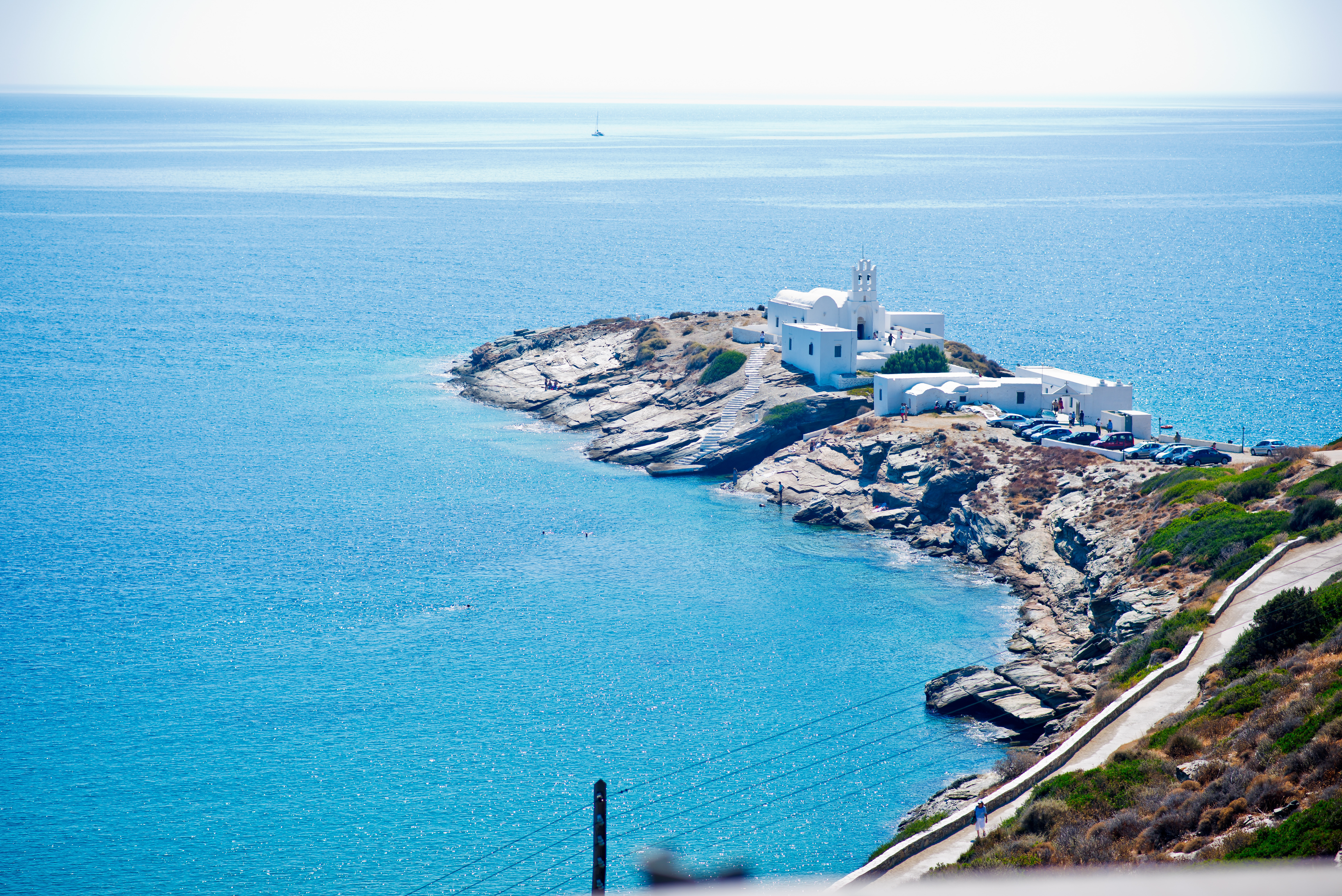 The island, which is the birthplace of many great cooks has a delicious cuisine with traditional dishes, such as chickpeas, manouras, myzithra, garlic, chickpeas, roasted meat in mastelo. Also, very known are the island’s homemade desserts, and cookies such as almonds-kind, bourekia, pasteli, honey-pie and buns. In Artemonas, a three-day festival of Cycladic Gastronomy is organized each year in early September with entries from all the Cycladic islands and beyond. 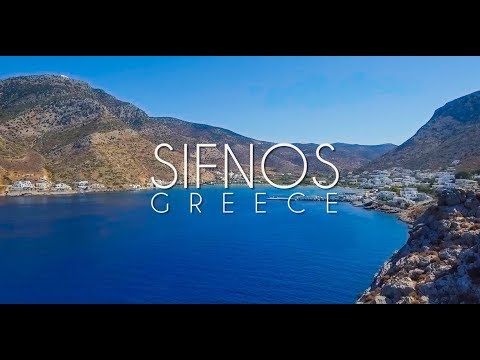