Greece invites the public into its mansions (Part two)

In Part One, we presented that the Hellenic Society for the Protection of the Environment and the Cultural Heritage, as part of its participation in the celebration of “European Year of Cultural Heritage 2018” and in cooperation with the pan-European link European Historic Houses Association, the organization which is dedicated to the protection, maintaining and promoting of the European artistic, cultural and architectural heritage, organizes the participation of Greece in the pan-European awareness festival “Private Heritage Week”.

Below you can see some other of the Greek houses participating:

It is a three-storey neoclassical building with sides on three streets and retains its original form, with the stone doorways, the arched openings at the shop floor, the heavy artificial decor and all the architectural elements of the neoclassical style. Shops occupy the ground floor and the upper floors are residential. It is located on Othonos2, Sofroni 2 and Bouboulinas and can be visited on 25 and 26 May from 6 pm to 9 pm. 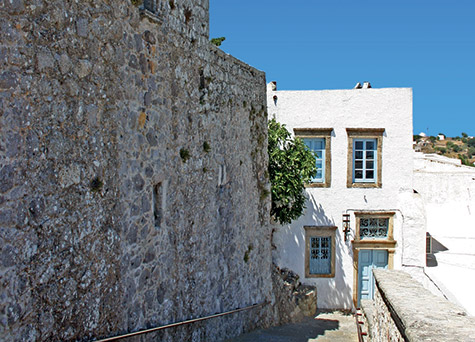 Stavraka mansion was built in the in 1870-1880 on the north side of the village of Chora, just beneath the walls and next to the entrance of the monastery. It is a traditional interpretation of a Patmian house by an architect of the neoclassical period. It consists of three floors and a small courtyard. In 2012, it was restored by Elliniki Etairia and the Patmian Culture Company and sponsored by the Leventis Foundation. The two spacious rooms on the 2nd and 3rd floors are available for seminars, events and exhibitions. It is located in Chora and can be visited on May 27 from 11 am to 2 pm.

It was built in the early 20th century and remains one of the few neoclassical buildings of the region which are populated and remain in good condition. Like all of the neoclassic buildings in Sifnos, it combines both neoclassical and traditional architectural elements. It is located on Artemonas and can be visited on May 25 from 6 pm to 8 pm, on May 26 from 11 am to 1 pm and from 6 pm to 8 pm and on May 27 from 11 am until 1 pm.

Gialouri mansion is a traditional Skyros house, which was donated to the Municipality of Skyros, and is open to visitors, during the summer months. It is located at the top of Skyros town, in the area of “Megali Stratia” and can be visited on 25, 26 and May 27 from 9 am to 12 pm. 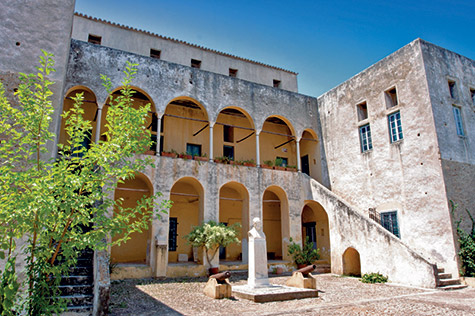 The mansion of Chatzigianni-Mexi – who was one of the first rulers of Spetses in the years of the nation’s independence – was built between 1795 and 1798 in a U shape, it was declared a monument in 1924 and hosts objects that represent more than 4,000 years of cultural history of the island. The Spetses Museum operates as an Archaeological Historical and Folklore Collection of the island in 1939, a year after it was donated to Spetses by the heirs, Kalomira Mexi and Niketa Thermisioti-Katsina, in 1938. It is located in Chora and can be visited on May 27 from 8 am to 3 pm.

It is an imposing building with three visible sides, made with marble. The ground and the first floor are used as shops and warehouses, while the internal layout of the second floor, which is the main house, is very elegant. Magnificent murals decorate the corridors and the main hall. The most famous ceiling paintings of Syros is located in this building (the main lobby). It is located on Thimaton Sperchion 14-16 (above the optical KOHΣ store) and can be visited on May 26 from 10 am to 2 pm. 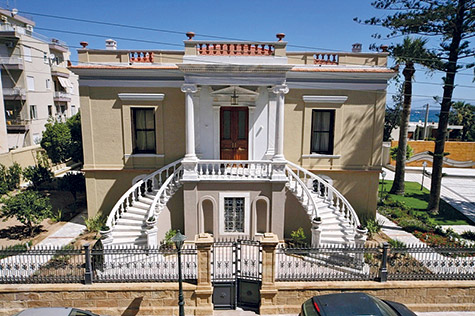 The mansion consists of the impressive two-storey building, a parking garage and an auxiliary smaller building. It was built (1888-1892) in the period in which eclecticism prevailed in Chios, which was found in the urban centers of the Ottoman Empire. Some of the key features are the painted decorations, the neoclassical openings on the front, the ornate railings and doorways, the large wooden conservatory and especially the imposing marble Ionic entrance – structures which have the purity of the Athenian neoclassicism. It is located on Michail Livanou 51 and can be visited on May 25 from 9 am to 5 pm.