Share
Kythnos is a cycladic island, between Kea and Serifos, and only 2 hous from the port of Lavrio. Kythnos preserves its wild beauty intact, remaining unique, hospitable and charming within its simplicity.
There are two inland villages, Chora or Messaria and Dryopida. Near the village is the cave “Katafiki”. It is one of the biggest unexploited caves in Greece, having a rich decoration of stalactites and stalagmites.During World War II, the cave was a refuge for the residents.
Additionally, there are three main coastal settlements: the main port Merichas, Loutra with the hot water springs and Panagia Kanala with the church of the same name. There are daily connections between Kythnos and the ports of Pireus and Lavrio.
Kythnos has 128 country chapels besides the churches of the two main villages. You can see them standing out in brilliant white, humble, in the fields or behind the low mountainous hills of the island. You can visit them and admire the simplicity and wisdom of the local builders.
Beautiful Kythnos has wonderful beaches forming picturesque bays with crystal clear water and ample shade from tamarisk trees for those who cannot stand constant exposure to the sun. One of the most remarkable beaches of Kythnos is Loutra. If you dive into the water on one of its sides, you will enjoy the beneficial qualities of the hot water coming out of the mineral springs, which ends up in the bay with the crystal clear water. The most impressive beach of Kythnos is Kolona: a strip of sand splits the sea in two forming two baches on the same seashore. Fykiada and Flambouria (situated near the church of Panagia ) are among the most characteristic beaches of Kythnos, combining beautiful landscape with golden beaches.
The spa of Kythnos is situated in Loutra. The building dates back to 1857 and has hot water springs with therapeutic qualities. Inside you will see the basins of King  Othon and Queen Amalia – the first royal couple in the modern history of Greece.
It is of a rather special archaeologic interest, although various already known archaeological sites have not been excavated yet. Maroulas, on the NE side of the island, was the oldest prehistoric cycladic establishment. This side dates back in the Mesolithic Period (8.500 – 6.500 B.C.).
The fortified acropolis, which is called Oria Castle today, is on the North steep side of the island. That acropolis was the capital of the island during the Byzantine times and the Latin occupation; but it seems that it had already been inhabited since prehistoric times. On the other side of the island on the SW coast, it seems that one more fortified acropolis was established, Kastellas; it was founded in the early historic ages but it was abandoned at the end of the archaic period.
The most important site in times is Vryokastro of Rigokastro, as it is called today; it is on the NE side of the island and according to the ancient sources it was called Kythnos. The surface research in 1990 – 1995 brought to light many findings and the town planning and the residential organization of the town were clearly identified.

-It has been called “Thermia” since the 12th century when it was first referred to as “Diocese of  Kea and Kythnos”. The name “Thermia” is due to the hot springs of water existing to this day at the bay Loutra. It is said that King Othon and Queen Amalia (1837-1862) enjoyed their thermal baths at Loutra.

-Kythnos was used as a place of exile by the Romans. The island is known by an infamous pirate named Neron.

-The miraculous image of Panagia Kanala was painted by the priest Emmanuel Skordilis at 1575. Every August 15th at Panagia Kanala the biggest festival is organized with the participation of the Navy. 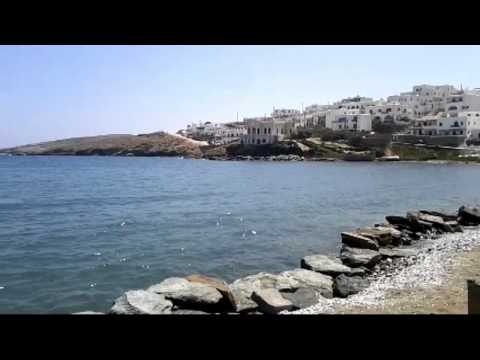