The island that was curved in lava

The biggest and most important crater which is called Stefanos, monopolises the tourists” interest as it is one of the biggest and best preserved hydrothermal volcanoes in the world.

Nisyros is located northwest of Rhodes, between Kos, Tilos and Astypalaia. Rugged coastline and green slopes are interrupted by beaches of exceptional beauty. The active volcano and hot springs are the center of attraction and the main reason for visiting the island.

Nisyros consists of volcanic mountains, while the center of the island occupies one of 4 km diameter caldera. Inside the caldera is the largest hydrothermal crater in the world, Stephenos, who has a diameter of 300 meters and in total Nisyros has five craters. The last eruption took place in 1888. . A volcanic dome rises to 700 meters, giving the highest elevation on the island.

The abundant thermal springs constitute another characteristic feature of the island of Nisyros. Along the island’s beachside and in several places hot water is welling out (starting from 30 to 60 degrees). It’s about a combination of sea water and rain water containing geothermal liquids of the superior thermal horizon. The most famous springs are the following: the one of Loutra at 1500 metres in the north part of Mandraki and the one of Thermiani, in the northern border of the village of Paloi. Both of them belong to the «salty thermal springs containing sulphurated hydrogen». A third famous thermal spring is the one of Avlaki.

In the village of Mandraki, the capital of the island, is located the Knights Castle in which you may find the monastery of Panaghia Spiliani (Holy Virgin of the Caves) dating back from the year circa 1400. Starting from the classical antiquity period the acropolis of the ancient town of Mandraki, Palaiokastro, is maintained in a perfect condition.

From the balcony of Emporeio village, you can enjoy the most spectacular view to the Volcano and Prophet Elijah. Also, pay a visit to Nikeia, a mountainous village of traditional architecture and a panoramic view to the Volcano. Here you will see Porta (Door), a famous cobblestone square, which has been awarded as one of the best squares in Europe.

-Porta (Door), a famous cobblestone square, has been awarded as one of the best squares in Europe.

-According to the Mythology, the god Neptune, helping Zeus while he was combating the Titans, he was pursuing the terrible giant Polyvotis on the beachside and in the seas. Arriving in front of the island of Kos he detached with his trident a part of the island, he launched it against Polyvotis and he buried him underneath.

-The island of Nisyros passes to the Knights of Rhodes in 1312. The Knights marked their presence by building five fortresses in the strategic points of the island. 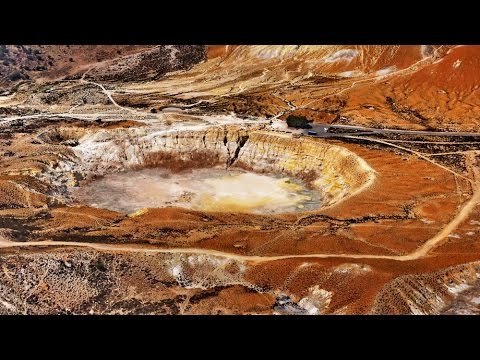