The little paradise of the Aegean

Folegandros is an untouched piece of true Greece with a relaxing atmosphere, hospitality and nice beaches, close to Santorini and Milos. It is the alternative suggestion for people wanting to have a calm vacation and combine relaxation with sightseeing, endless sunbathing and swimming and a vivid nightlife.

Folegandros has three small villages, Karavostasi (the port), the Chora, Ano Meria and Agali Beach that are connected by paved roads. Chora is closed to car and motorcycle traffic and has a unique «center» of three squares in a row.

Accornding to Mythology,  Folegandros was actually named after one of the sons of king Minos, named Folegandros, who led the Minoans out of Crete to the island in order to find refuge because Cretans were persecuted from their homeland at the time.

The castle of Folegandros, established by Marco Sanudo, the duke of Naxos during 1212, is a medieval settlement created in order to protect the island’s population from enemies and pirate invasions. Still inhabited and well preserved the castle offers breathtaking views of the island and the surrounding Aegean Sea.What catches the eye immediately is the endless series of «dry-placed» walls that have been erected over the centuries by the inhabitants to create terraces on the sunny slopes of the territory to be able to raise cereals.

Folegandros has nice beaches, but uneasy to reach. You will need to walk a bit, or rent a boat. Two beaches can be reached by car: Karavostasi and Angali, one of the nicest beach.Folegandros” landscape is varied, and includes tall cliffs and a large cave. Hryssospilia (The Golden Cave) is also uneasy to reach. Moreover, it has important archaelogical value. It is a remarkable cave found at an altitude of approximately 10 meters above sea level on the hillside of mountain Palaiokastro. Situated on the eastern coast of the island Hryssospilia cave, one of the biggest caves in Greece, is adorned with stalactites and stalagmites forming a throne-like perch along the cave’s long chamber. The cave is considered an exceptional archeological site since it was used as a place for rites, mystique rituals and sacred ceremonies during the 4th century B.C. according to some archeological findings.

Walking this island is a joy as the nature and its perfumes, and its silence are really unique. In springtime and early summer the island is rich with caper flowers, thyme and oregano.

In Folegandros there are many, mostly small, churches and chapels. The most famous church is Panagia, which is located across from the high school in Chora.According to archeologists the church was built on the same place where an ancient temple used to be and constructed with the remains of this temple. Famous craftsmen have decorated both the interiors and exteriors of this church with the multi-domed basilica with exquisite inscriptions and statues. Across the island visitors will encounter many small chapels.

– The area of the Kastro, a small fortress made by the Venetians in 1210, a small village into the Chora village, will take you back to the Middle Ages.

– The village of Ano Merià is spread over cultivated fields and “dry-placed” walls and has typical “kafeneio” and taverns. It has also a Folkloristic Museum, open from 10 to 18.

-In 1715 the island of Folegandros was attacked by the Kapoudan Pasha, who sold the island’s inhabitants as slaves. The few inhabitants who were left on the island invited their neighbors from nearby islands to come and settle in Folegandros so as to create a new community. This community flourished in the 18th century thanks to the trade and other commercial services. The island was finally liberated during the Greek revolution in 1821.

-According to the myth on May 1st of 1790 18 boats of Algerian pirates reached the island of Folegandros and the island’s frightened residents begged for Virgin Mary’s protection. Then all of a sudden a strong wind blew and sank the ships without leaving any survivors. Thus on the 1st of May each year the church of Panagia is celebrated with a feast. The church can be reached from the Pounta square at Hora by following an uphill path. 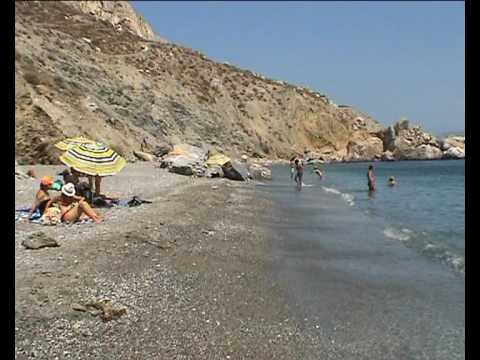