Rhodes is an island in Greece, located in the eastern Aegean Sea. It is the largest of the Dodecanese islands in terms of both land area and population, with a population of 115,490 (2011 census), and also the island group’s historical capital. Administratively the island forms a separate municipality within the Rhodes regional unit, which is part of the South Aegean region. The principal town of the island and seat of the municipality is Rhodes. The city of Rhodes had 50,636 inhabitants in 2011. It is located northeast of Crete, southeast of Athens and just off the Anatolian coast of Turkey. Rhodes” nickname is The island of the Knights.

Historical sites on the island of Rhodes include the Acropolis of Lindos, the Acropolis of Rhodes with the Temple of Pythian Apollo and an ancient theatre and stadium,ancient Ialysos, ancient Kamiros, the Governor’s Palace, Rhodes Old Town (walled medieval city), the Palace of the Grand Masters, Kahal Shalom Synagogue in the Jewish Quarter, the Archeological Museum, the ruins of the castle of Monolithos, the castle of Kritinia, St. Catherine Hospice and Rhodes Footbridge.

Historically, Rhodes was famous worldwide for the Colossus of Rhodes, one of the Seven Wonders of the Ancient World. The Medieval Old Town of the City of Rhodes has been declared a World Heritage Site. Today, it is one of the most popular tourist destinations in Europe.

The island of Rhodes is shaped like a spearhead, 79.7 km (49.5 mi) long and 38 km (24 mi) wide, with a total area of approximately 1,400 square kilometres (541 sq mi) and a coastline of approximately 220 km (137 mi). The city of Rhodes is located at the northern tip of the island, as well as the site of the ancient and modern commercial harbours. The main air gateway (Diagoras International Airport, IATA code: RHO) is located 14 km (9 mi) to the southwest of the city in Paradisi. The road network radiates from the city along the east and west coasts.

Outside of the city of Rhodes, the island is dotted with small villages and beach resorts, among them Faliraki, Lindos, Kremasti, Haraki, Pefkos, Archangelos, Afantou, Koskinou, Embona (Attavyros), Paradisi, and Trianta (Ialysos).

The interior of the island is mountainous, sparsely inhabited and covered with forests of pine (Pinus brutia) and cypress (Cupressus sempervirens). While the shores are rocky, the island has arable strips of land where citrus fruit, wine grapes, vegetables, olives and other crops are grown.

The Rhodian population of fallow deer was found to be genetically distinct in 2005, and to be of urgent conservation  concern. In Petaludes Valley (Greek for «Valley of the Butterflies»), large numbers of tiger moths gather during the summer months. Mount Attavyros, at 1,216 metres (3,990 ft), is the island’s highest point of elevation.

The 226 BC earthquake that destroyed the Colossus of Rhodes and the earthquake of 3 May 1481  destroyed much of the city of Rhodes.

The island was inhabited in the Neolithic period, although little remains of this culture. In the 16th century BC, the Minoans came to Rhodes. Later Greek mythology recalled a Rhodian race called the Telchines and associated the island of Rhodes with Danaus; it was sometimes nicknamedTelchinis. In the 15th century BC, Mycenaean Greeks invaded. After the Bronze Age collapse, the first renewed outside contacts were with Cyprus. In the 8th century BC, the island’s settlements started to form, with the coming of the Dorians, who built the three important cities of Lindos, Ialyssos and Kameiros, which together with Kos, Cnidus and Halicarnassus (on the mainland) made up the so-called Dorian Hexapolis (Greek for six cities).

In Pindar’s ode, the island was said to be born of the union of Helios the sun god and the nymph Rhode, and the cities were named for their three sons. The rhoda is a pink hibiscus native to the island. Diodorus Siculus added that Actis, one of the sons of Helios and Rhode, travelled to Egypt. He built the city of Heliopolis and taught the Egyptians the science of astrology.

In the second half of the 8th century, the sanctuary of Athena received votive gifts that are markers for cultural contacts: small ivories from the Near East and bronze objects from Syria. At Kameiros on the northwest coast, a former Bronze Age site, where the temple was founded in the 8th century, there is another notable contemporaneous sequence of carved ivory figurines. Phoenician presence on the island at Ialysos is attested in traditions recorded much later by Rhodian historians.

Following the death of Alexander, the city developed into a maritime, commercial and cultural center; its coins circulated nearly everywhere in the Mediterranean. Its famous schools of philosophy, science, literature and rhetoric shared masters with Alexandria.

Throughout the third century BC, Rhodes attempted to secure her independence and her commerce, most especially her virtual control over the grain trade in the eastern Mediterranean. Both of these goals were dependent upon no one of the three great Hellenistic states achieving dominance, and consequently the Rhodians pursued a policy of maintaining a balance of power among the Antigonids, Seleucids and Ptolemies.

Rhodes was occupied by the Islamic Umayyad forces of Muawiyah I in 654, who carried off the remains of the Colossus of Rhodes. The island was captured by the Arabs before 674 as part of their attack on Constantinople. When their fleet was destroyed by storms and Greek fire, the island was evacuated. In 715 the Byzantine fleet launched a rebellion at Rhodes, which led to the installation of Theodosios III on the Byzantine throne.

From the early 8th to the 12th centuries, Rhodes belonged to the Cibyrrhaeot Theme of the Byzantine Empire, and a center for shipbuilding and commerce. In circa 1090, it was occupied by the Muslim forces of the Seljuk Turks, not long after the Battle of Manzikert. Rhodes was recaptured by the Emperor Alexios I Komnenos during the First Crusade.

As Byzantine central power weakened under the Angeloi emperors, in the first half of the 13th century, Rhodes became the center of an independent domain under Leo Gabalas and his brother John, until it was occupied by the Genoese in 1248–1250. The Genoese were evicted by the Empire of Nicaea, after which the island became a regular province of the Nicaean state (and later of the restored Byzantine Empire). In 1305, the island was given as a fief to Andrea Morisco, a Genoese adventurer who had entered Byzantine service.

In 1309, the Byzantine era came to an end when the island was occupied by forces of the Knights Hospitaller. Under the rule of the newly named «Knights of Rhodes», the city was rebuilt into a model of the European medieval ideal. Many of the city’s famous monuments, including the Palace of the Grand Master, were built during this period.

In 1912, Italy seized Rhodes from the Turks during the Italo-Turkish War. The island’s population thus bypassed many of the events associated with the «exchange of the minorities» between Greece and Turkey. Due to the Treaty of Lausanne, the island, together with the rest of the Dodecanese, was officially assigned to Italy. It became the core of their possession of the Isole Italiane dell’Egeo.

Following the Italian Armistice of 8 September 1943, the British attempted to get the Italian garrison on Rhodes to change sides. This was anticipated by the German Army, which succeeded in occupying the island. In great measure, the German occupation caused the British failure in the subsequent Dodecanese Campaign.

In 1947, together with the other islands of the Dodecanese, Rhodes was united with Greece.

The Colossus of Rhodes was considered to be one of the Seven Wonders of the Ancient World. This giant bronze statue was documented as once standing at the harbour. It was completed in 280 BC and destroyed in an earthquake in 224 BC. No trace of the statue remains today.

– The beach Anthony Quinn became famous by the movie “The Guns of Navarone” which filmed there starring the famous actor Anthony Quinn.

– In 1988, the old town of Rhodes was designated as a World Heritage City by UNESCO

– The most celebrated of all was the Colossus, one of the Seven Wonders of the Ancient World, made between 304 and 293 B.C. by the Lyndian sculptor Hares. The construction of the Colossus took 12 years and was finished in 282 BC. For years, the statue, representing their sun god Helios, stood at the harbour entrance, until a strong earthquake hit Rhodes about 226 BC. The city was badly damaged, and the Colossus was demolished.

– In ancient times there was a Roman saying: “Hic Rhodus, hic salta!”—”Rhodes is here, here perform your jump”, an admonition to prove one’s idle boasts by deed rather than talk. It comes from an Aesop’s fable called “The Boastful Athlete” and was cited by Hegel and Marx.

– The valley of the Butterflies is located 25 kilometers from the city of Rhodes near the area of Kalamonas. It is in this rare habitat that the butterfly Panaxia Quadripunctaria makes its appearance from mid June to mid September. 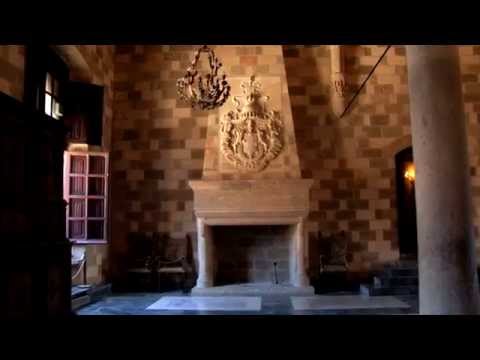