Writing his chapter in the American baseball’s history

Nick Markakis is a professional baseball player for the Atlanta Braves of Major League Baseball (MLB). He previously played for the Baltimore Orioles from 2006 to 2014. Markakis is a two-time Gold Glove Award winner (2011, 2014)

Markakis was born on November 17th, 1983 in Long Island of New York. His origins are in Greece and Germany. His father is Dionisios Markakis and his mother is Mary Lou. His family relocated to Woodstock in 1993 thanks to Nick’s talent in baseball. Since his early age, he has been a fan of Boston Red Sox team.

He’s married to Christina and has 2 children. Together with his wife, he has founded Right Side Foundation in 2009, focusing on children, whether they are disadvantaged, sick or lonely throughout Maryland. Markakis himself is a major charity worker, donating $75,000 per season towards the foundation’s funds. He’s also involved in the work of Going to Bat Against Breast Cancer, Prostate Cancer Foundation and Home Run Challenge.

In August 2003, he played in the European National Championship, winning a silver medal with Team Greece. He also played for the Greek Olympic baseball team in the 2004 Olympic Games in Athens, Greece. The National Team was established by Peter Aggelou, owner of the Baltimore team, provided that players’ great-grandfathers had Greek origins. In 2004, Markakis joined Delmarva Shorebirds.

In 2005, he played with Grederick Keys of Maryland and was voted as the Top Player of the Year in Baltimore, joining later the All-Star Game of California and being again voted as Best Player.

In 2009, he signed a 6-year contract for $66.1 million and was honoured with his own shirt called “Nick the Stick, Camden’s Finest”. In 2011, Nick Markakis was the Gold Glove Award winner.

On December 3, 2014, Nick Markakis agreed to a four-year $44 million contract with the Atlanta Braves. 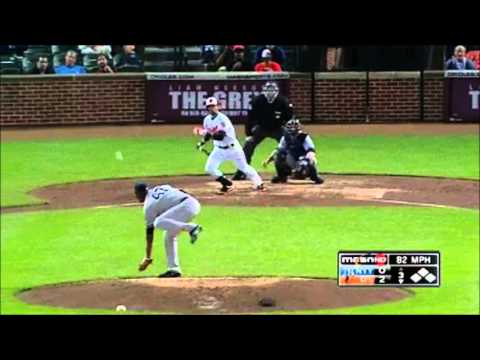