“The Wog boy” of Australia

Nick Giannopoulos is an actor, writer, producer and director. He became famous after the success of «The Wog boy» and “The kings of Mykonos”.

Born on the 1st of July in 1963 in Melbourne, Giannopoulos was the first-born son of Greek immigrant parents. He graduated in 1985 from the distinguished Victorian College of the Arts with a degree in Dramatic Schemes.

In 1987 at the Melbourne International Comedy Festival “Wogs Out of Work” was debuted, written by Nick Giannopoulos, Simon Palomares and Maria Portesi. It remains one of the highest grossing Australian created live shows of all time.

He has won numerous awards, among which two Mo Awards for «Best Comedy Performer» in the period 1998-1999, the IF Award for Most Successful Box Office Australian Film of the Year in 2000 and the Comedy Star Award of the Year at the Australian Movie Exhibitors Convention in 2001.

He has written, stared and signed the production of TV series, TV specials and theatrical performances. He has presented and be the producer to the video tribute «Greece Is The Word», which was attended by more than three (3) million viewers, while the tribute was shown again before the Opening Ceremony of the Olympic Games in 2004.

He was the writer and star of the successful sitcom «Acropolis Now», shown in Australia for four years (1989-1992). In 1991 he played Danny Zouko in the musical «Grease» a production by David Atkins staged in «Footbridge Theatre» in Sydney. As for “The Wog boy”, it reached in 2008 the Top 10 cinema ticket in Australia, making the producers rubbing their hands because of the significant but expected revenues in a relatively inexpensive production.

«The Kings of Mykonos»

In the film, Steve goes to the Greek island of Mykonos to acquire a huge property belonging to him. There he faces a series of problems – among them the consideration to pay taxes to the Greek Authorities and furthermore he meets many Greeks that cause him problems.

He never forgets his roots – he has been visiting Greece almost on an annual base since 1988, while he had came to Greece for the first time at the age of 14. Although he had trouble with his last name, when he suddenly saw a sign with the name «Giannopoulos”, he realized that this was something that could not and should not be changed.

Nick Giannopoulos’ co-actress in the film “Kings of Mykonos” which cost 8 million euros and directed by Peter Andrikidi, is Zeta Makrypoulia- who was praised by Nik, saying that she will have no difficulty making a career in Hollywood. The international cast is completed by Alex Dimitriadis, Vince Kolosimo, Kosima Coppola, Kevin Sorbo and Greece’s Dimitris Starovas, Manos Gavras, Costas Kilias etc.

His latest appearance was on the movie “Fat Pizza vs. Housos” where he had the role of a Taxi Driver. 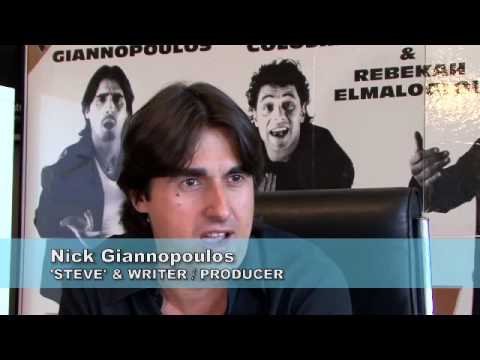