The jewels maker who the celebrities prefer

Nikos Koulis is a Greek designer of jewelry with worldwide recognition and success, as his highly aesthetic, precious creations garner top international fashion titles, and have won the red carpet, with celebrities such as Michelle Obama, Oprah Winfrey, Jennifer Lopez and Scarlett Johansson, choosing them for their official appearances.

He was born in Athens to a jeweler family and although he was a crafting since he was young, he initially studied classical literature. However, when he got his degree, he decided to give in to what he really liked and studied Gemology and Sculpture at the Gemological Institute of America. 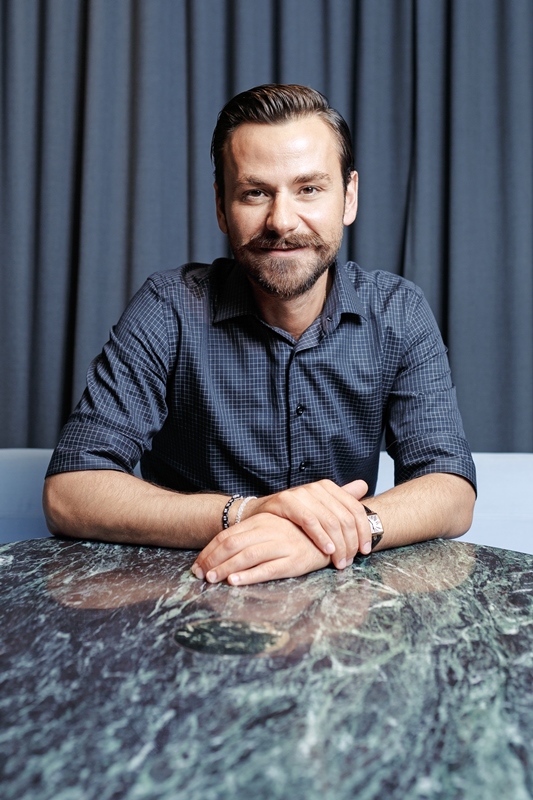 He has worked in many laboratories in Italy to specialize in stone cutting and knitting and, in 2006, he created the Nikos Koulis Jewels brand in Athens, presenting his elaborate technique along with his in-depth knowledge of jewelry quality and highlighting personal aesthetics footprint and ethics in jewelry.

“From the very first pieces, I was interested in two axes” explains the Greek creator, “the quality of the stones and the application of the jewelry on the body. Nice design or marketing is not enough. As strong as promotion is, it cannot convince the customer, as a piece of jewelry does on its own when someone wears it and feels it. The quality of an object’s construction is what defines its timelessness. This is the criterion – a common denominator for the brand’s appeal in Greece and abroad, one that guarantees its value and durability. ” 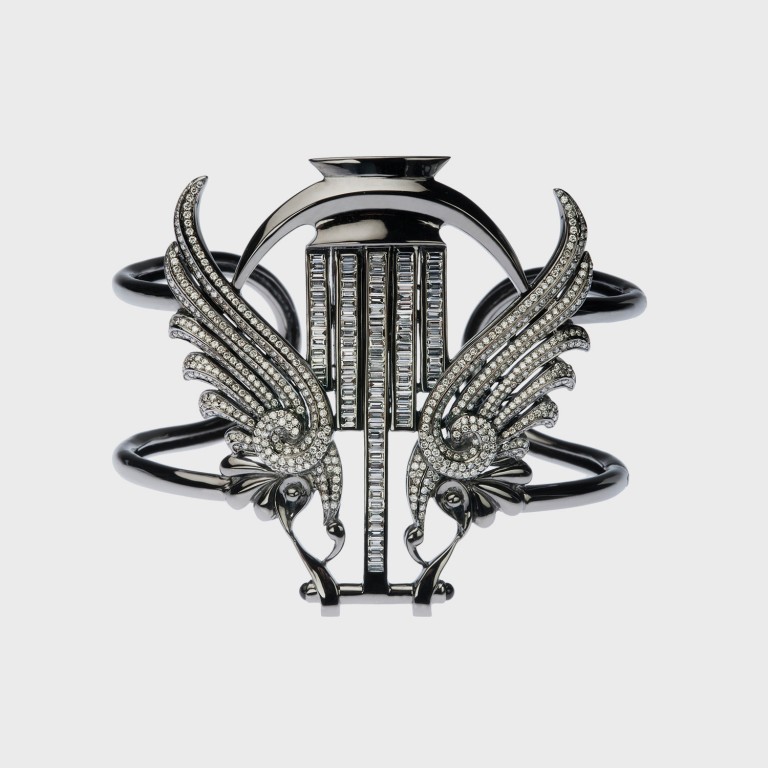 His first store opened in Mykonos in 2014, at a select point of sale that gave the brand international clientele, followed by fine jewelry exhibitions that opened points of sale abroad. A few months later, another store opened in Athens, with his “tranquil” boutique, created in collaboration with the Stage Design Office of Stavros Papagiannis and Giorgos Kyriazis, standing discreetly but vibrantly communicative in Kolonaki Square.

“I had a reverse course: Brand awareness and outlets were first built overseas and then in Greece. So, we were shielded against the outbreak of the Greek crisis because we focused on the international market. Also, our first selling points were in Europe and not in America, which was already affected by the 2008 crisis. ” 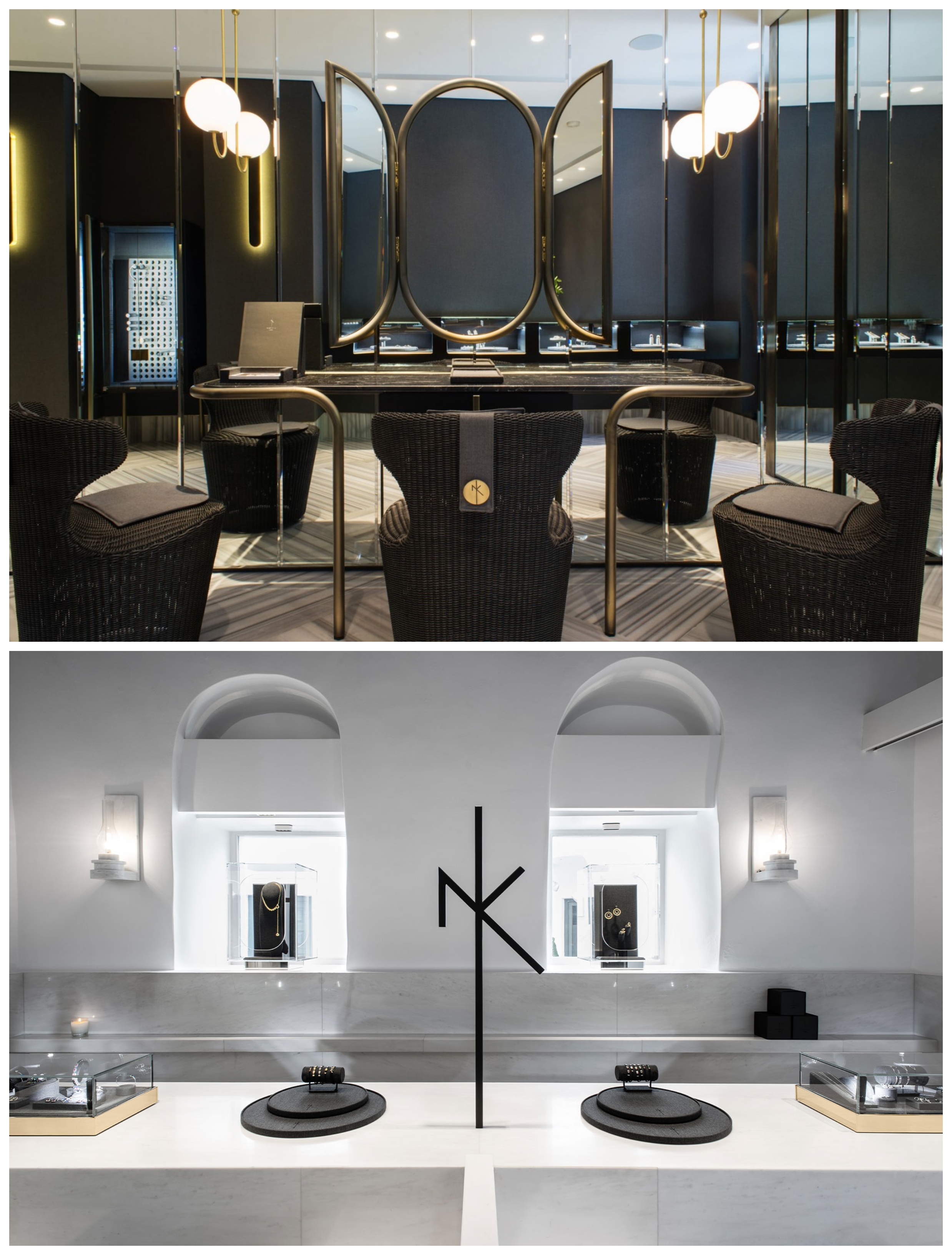 His point of reference is the woman who loves jewelry, wears it with respect and does not treat it as a temporary accessory. He is very happy when the jewelry is the protagonist and not the clothing and he finds women who dare heretical and intrigued by their choices.

Nikos Koulis creates jewelry with geometric shapes, architectural logic with purity, and even if the jewelry is imaginative, playful in the sense of colors and stones, he remains as dry and rigorous as he admits. “And if you look at my work cumulatively, the common denominator is technique, cutting and finishing. Me, first of all, I’m a jewel maker. ” 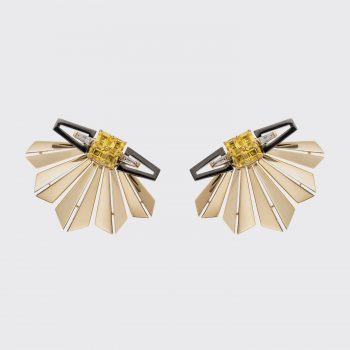 His basic principles are architecture and history: every stroll in the city, every film, artwork or image is written in his mind and creatively translated into a jewelry item or form. There is no clear inspiration, but it is determined by Art Deco’s steady influence, “dialogue with the past and resistance to the relentless evolution of technology with its “conveniences” that “erase” tradition and enhance handmade techniques.”

Still, the Greek root travels through collections like “Spectrum”, where the jewels translate the Mediterranean light passing through a pergola, as well as the symbolic “Medusa” that focuses on the serpentine motif. 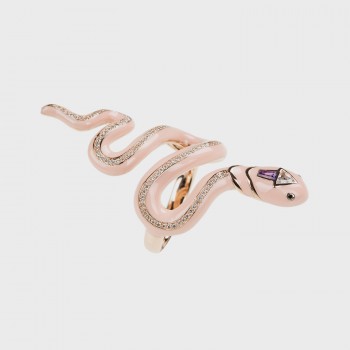 Moving steadily between high-end jewelry and fine jewelry, the designer divides his work between “atelier” pieces and collections such as “Oui” and “Lingerie”. The first, for example, based on his beloved Art Deco, featured a unique necklace inspired by the New York Empire State Building, while in the second, pearls and diamonds come together like embroidered lace.

It is meticulous and is appreciated by jewelers around the world. When he has created a piece of jewelry in his mind, he will wait to find all the materials needed to create what he has imagined without any discounts. For example, there was a time when he was searching 20 gems for a necklace for 6 whole months. Collectors, in a sense, invest in his face as they are interested in young creators who believe they will be established in the industry. 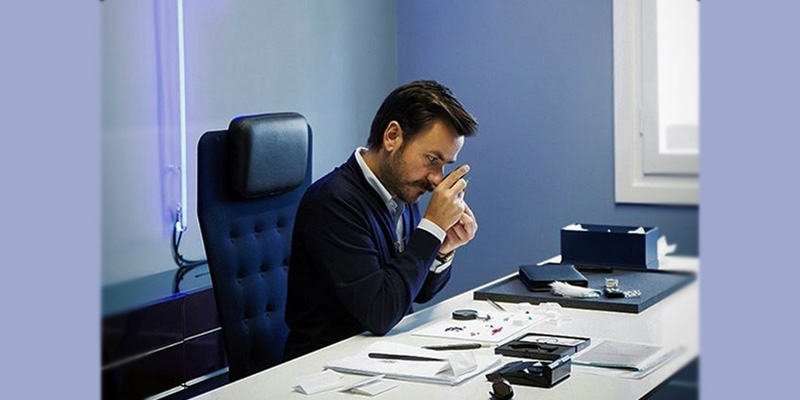 This is also a recipe that remains unchanged, the uninterrupted “hunting” of stone, which according to the designer has acquired in recent years a more moral dimension. “Nowadays, I’m checking where I get the diamonds, which their source is,” he says, explaining that he acquired the “germ” through his collaboration with Gemfields, a “responsible” emerald and ruby ​​supplier, whose ambassador he became two years ago. 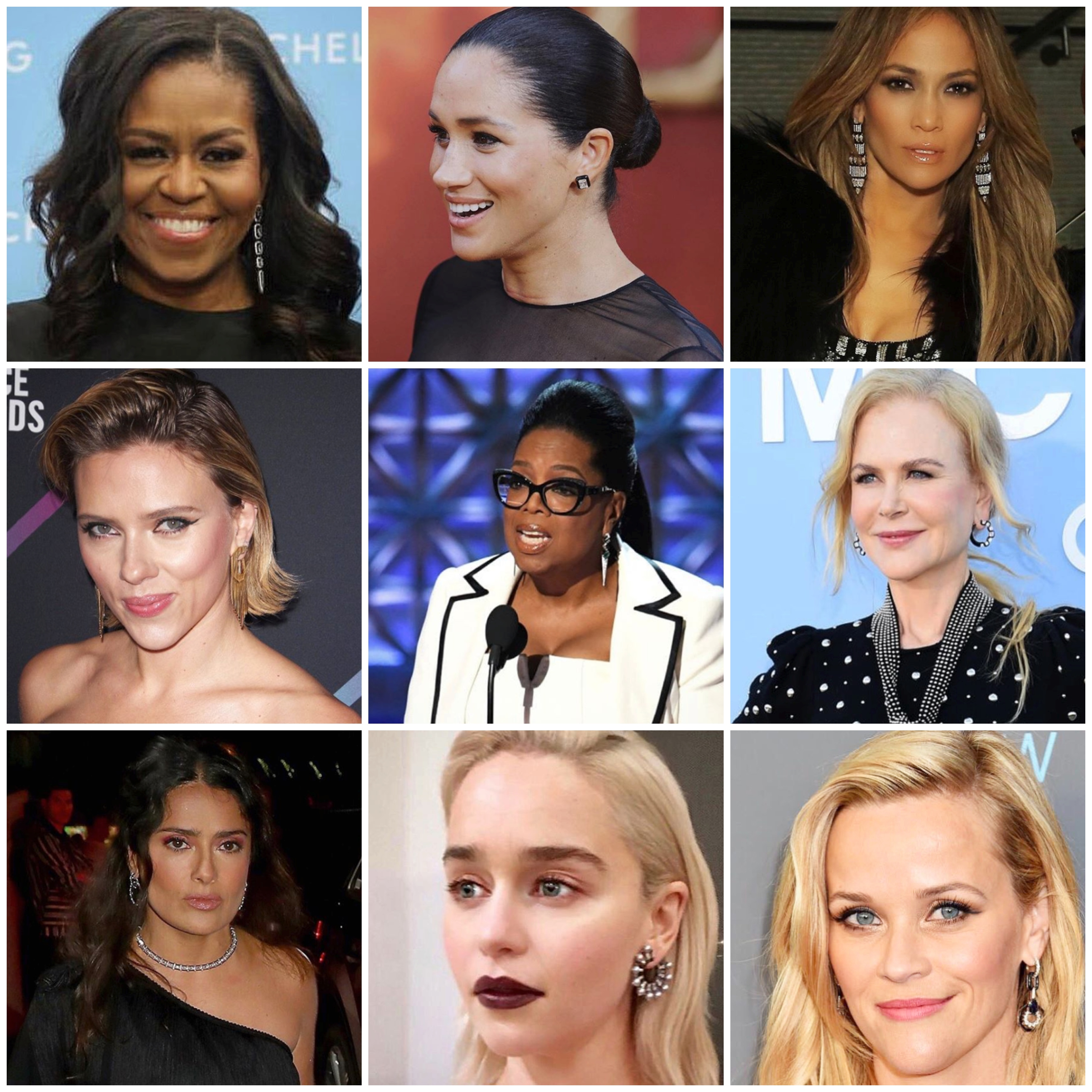 “Stylists know the brand and recommend it to the stars they represent, so wearing them is their personal choice. The red carpet is an industry in itself with very expensive deals behind the scenes, and my approach is detached. I’m just happy to wear them or buy them, but it’s not an end in itself for the brand,” the designer noted. 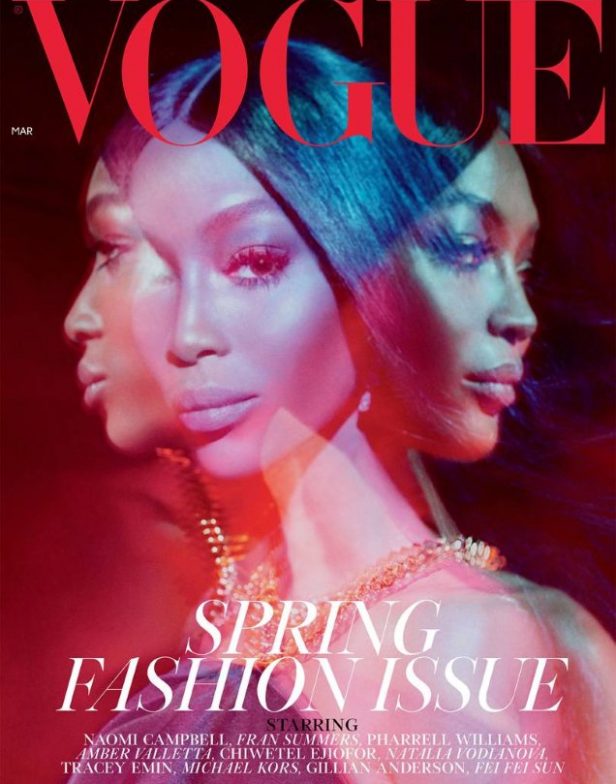 He has won the top prize at the top international Couture Design Awards three times. In 2015, he was a winner in the Bridal category, while in 2016 and 2018, in the Haute Couture category, impressing with his innovative approach. In 2017, he won the “International Jewellery Designer Brand Award” at the historic VicenzaOro jewelry exhibition in Italy.

In 2018, he was nominated for the top American contest GEM Awards 2018, which is held by Jewelers of America, in the Jewelry Design category, while he won the “Town & Country Jewelry Award 2018” for her Lingerie collection of “Pearls of the Year”. He was a finalist in the Town & Country Jewelry Award in the category “Diamonds of the Year 2019” and in January 2020 won the GEM Award for Jewelry Design.

Grateful for this wonderful, precious gem that I will keep and cherish forever 💎Receiving the Gem Award for Jewelry Design is an incredible honor for my work. Thank you @gemawards ☺️

When asked for a moment in his career that he feels truly proud of, he replies that awards or public appearances by unique women fuel the vain side of a creator, but he feels most proud when a finished piece exceeds the expectation he had for its design or production. This feeling is his “throttle” as a jewel maker.

After all, he himself has confessed his love for his job. He enjoys the process, from paper to implementation, “I have such an impatience and pleasure to see something finished. That’s why I push my co-workers and often become demanding. And as soon as I see it, my mind already runs to the next. ” 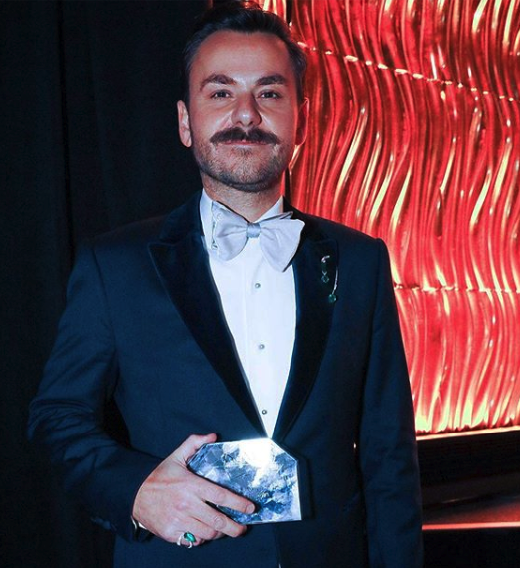 Most of the production is performed in Greece, while he also operates in Bangkok and Italy. The jewelry is being sold at international outlets, such as New York’s Bergdorf Goodman, where twice a year the Greek jewel maker presents his work in trunk shows, but also in stores in London, Paris, Moscow, Istanbul. Almaty, Saks in Miami and Connecticut, Neiman Marcus in Los Angeles, Texas and Boston and Dubai, among many others. In total, his brand has reached 29 cities and is sold by well-known stores or boutiques.