The creator of “Contemporary Byzantine Painting”

Fikos is the modern painter-hagiographer who “mixes” Byzantine with contemporary art and has created the “Contemporary Byzantine Painting”. Using new techniques of graffiti, he manages to converse with the tradition that reaches to Byzantium and Kontoglou, creating such an impressive aesthetic effect that both his art and his name have traveled and become known from Europe to Mexico, through festivals, personal exhibitions and project assignments.

The 32-year-old artist in Athens, where he lives, he sees not only his birthplace but also the one of his imagination, as it was that imagination which provided the stimuli needed to awaken his creativity. He has been involved in painting ever since he remembers himself, with his artistic concerns becoming more pronounced at the end of elementary school, so, fascinated by the creativity of manual labor, he began to make rosaries, casting wax icons, embroidery, and so on. 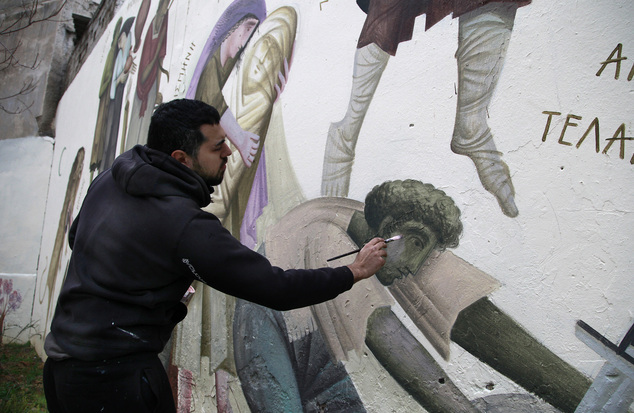 At the age of 13, he began to paint everything that interested him from the Athenian environment and everyday images of the city to comics and integrated landscapes. At the same time, he began studying Byzantine painting under the tutelage of George Cordes, with whom he worked professionally for five years in the illustration of Orthodox churches. At the same time, he developed his personal painting idiom and got involved with street art and graffiti writing.

His interest in contrasts and his attempt to dispel the myths that followed them led him to compose a new, different painting style, “Contemporary Byzantine Painting”, combining his favorite Byzantine tradition with contemporary painting streams. 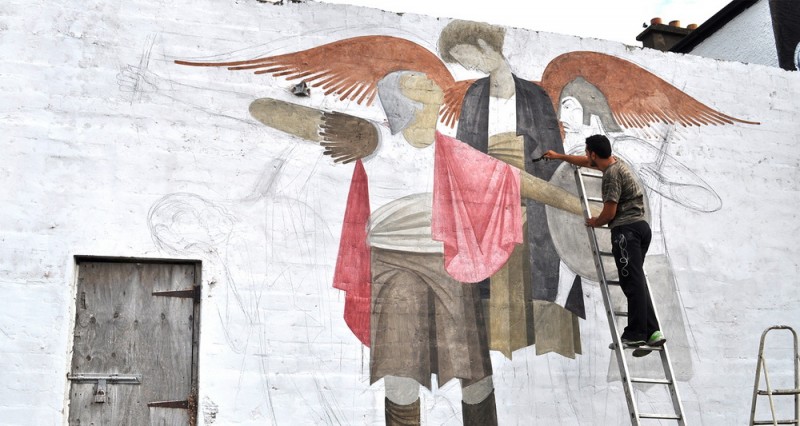 The contradictions have become an essential element of Fikos’ personal characteristic painting as he unites opposing arts and breaks established conventions – such as the rarity of the Greek spirit in street paintings and buildings, while for Fikos that’s the norm.

“The style of my work is contemporary Byzantine. The truth is that I did not choose this particular kind of painting. It chose me. I don’t think a 10-year-old kid has the mind to make conscious decisions. Some things come from above,” he said in an interview. 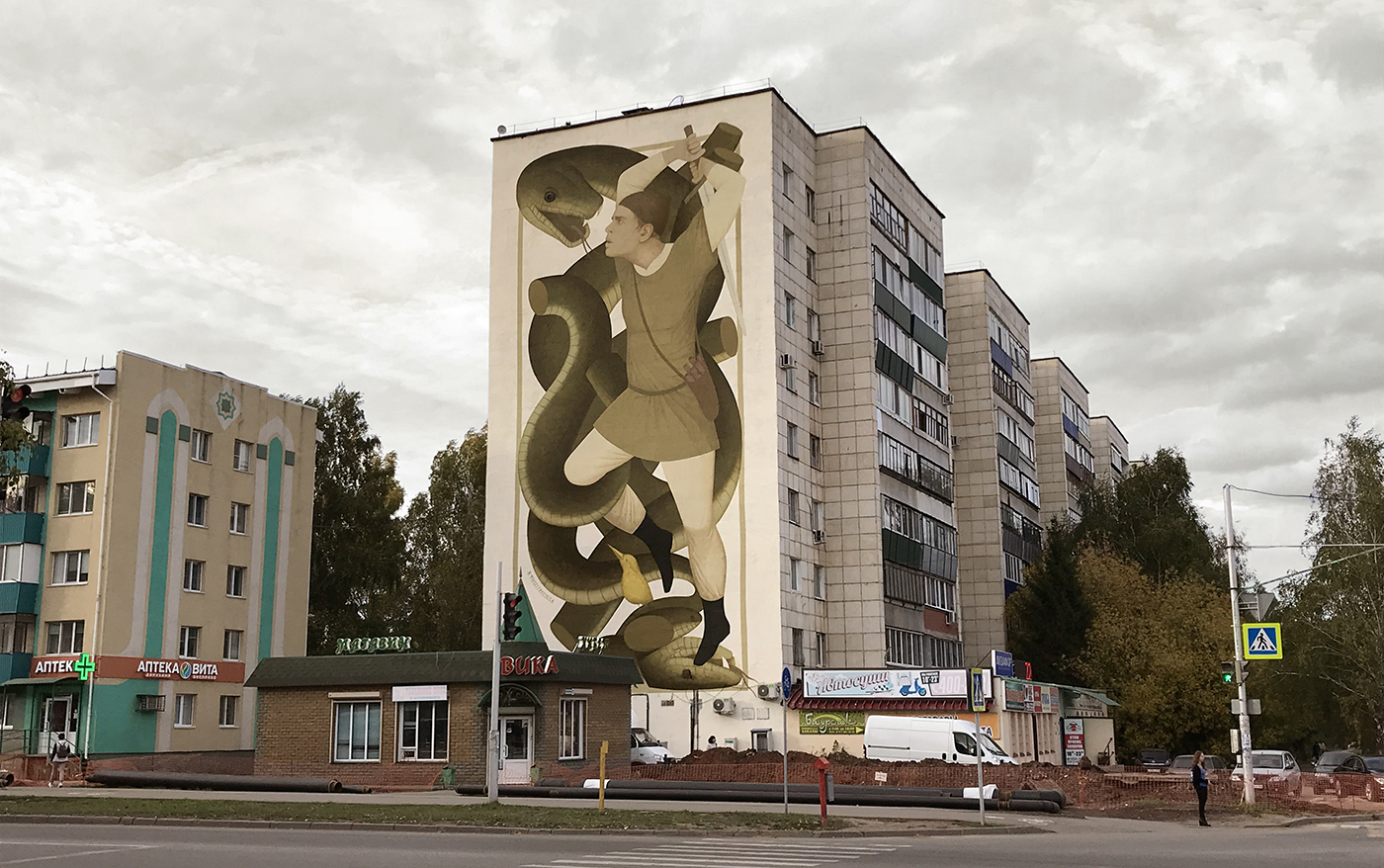 The birth of Byzantine street art, for him, was inevitable, as he was a graffiti artist and illustrator at the same time for years. “However, when I first grabbed a spray in ’99, there was not even the term ‘street art’ in Greece. It was just ‘graffiti’, more or less vandalism.” It wasn’t something that completed him since he wanted to do something more creative and the thought of taking the byzantine style he’d been working on to the streets had been on his mind for years.

After all, it happened when he felt mature enough to create it, just like a natural evolution, as he says, and not a figment of an ideology. Among the many reasons for this choice, the most important was to spread the message of contemporary Byzantine painting to the world. The theme of his painting, religious and secular, derives from Christian Orthodox tradition and ancient Greek mythology. 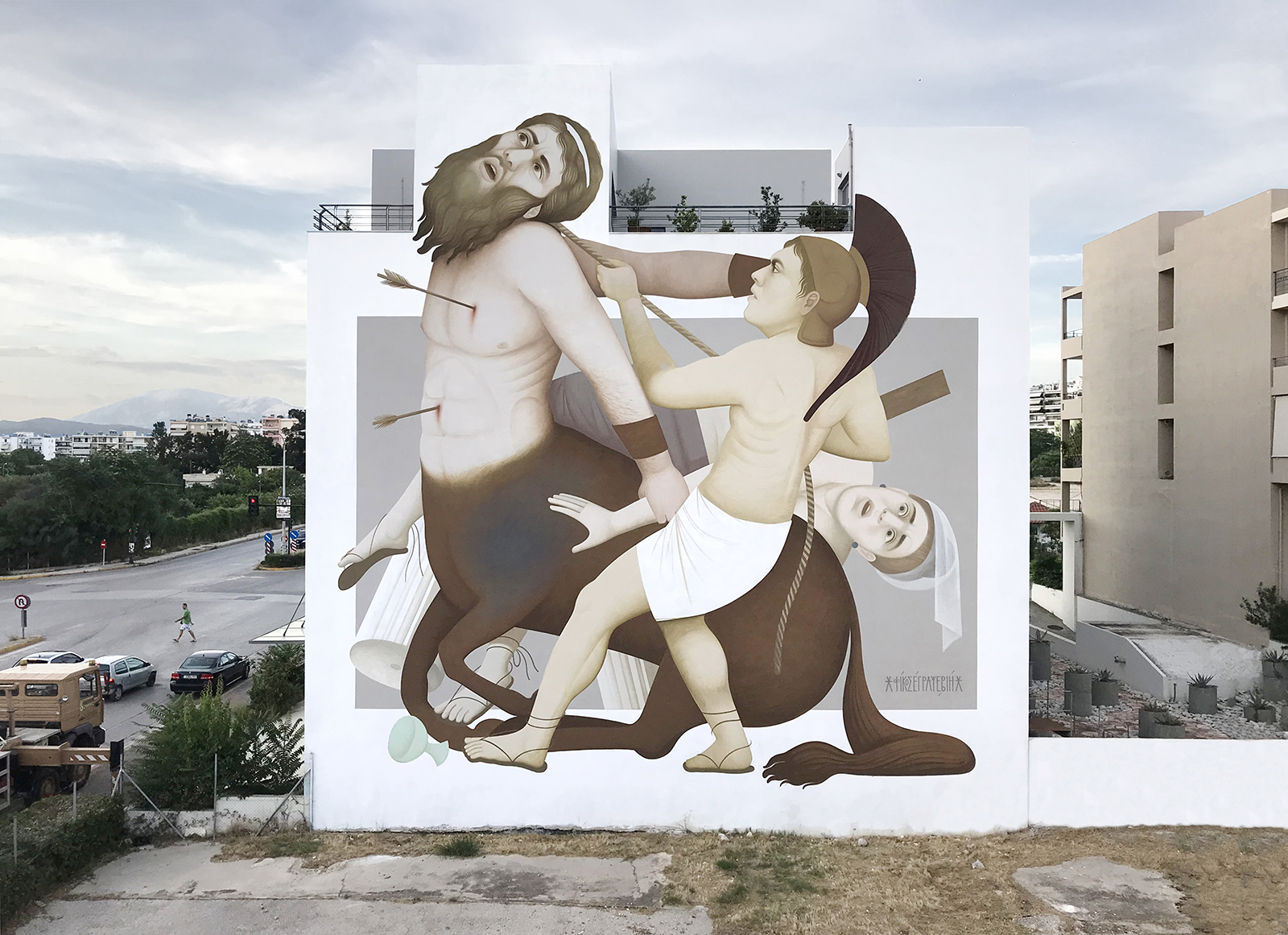 From the mystical character of the Cycladic figurines, the essence of the line of ancient Greek vases, and the monumentality of Byzantine frescoes to the achievements of modern artistic currents, such as modernism and street art, Fikos redefines its relation to modernity society, creating what is conventionally called “contemporary Byzantine painting”.

In his 18 years of painting, he has experimented with almost all materials and styles, from oil impressionism to landscapes, watercolors and comics. Technically, his painting is also presented on portable works – such as Japanese handmade paper stuck to wood – painted with the technique of self-tempering, and frescoes in which he uses acrylic. 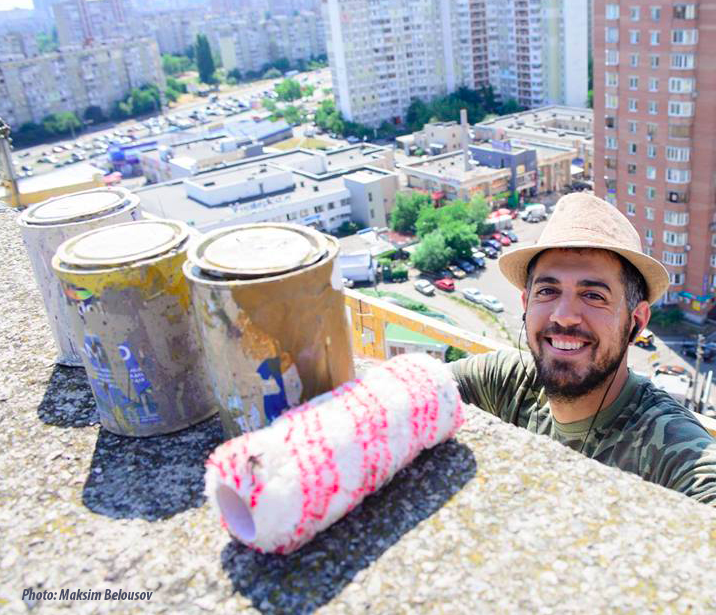 Fikos is not identified as a street artist, although he practices his art on facades of buildings and outdoors. He belongs, as he says, to the next phase of the development of street art, which began as graffiti, evolved into street art and has now begun evolving into a new kind, neo-muralism, which is essentially large-scale painting.

“That’s the kind of thing I do, not street art. Street art is something illegal, arbitrary, usually expressed as small quick interventions in the urban landscape and expressed by other means – usually spray, stencil, etc. ” 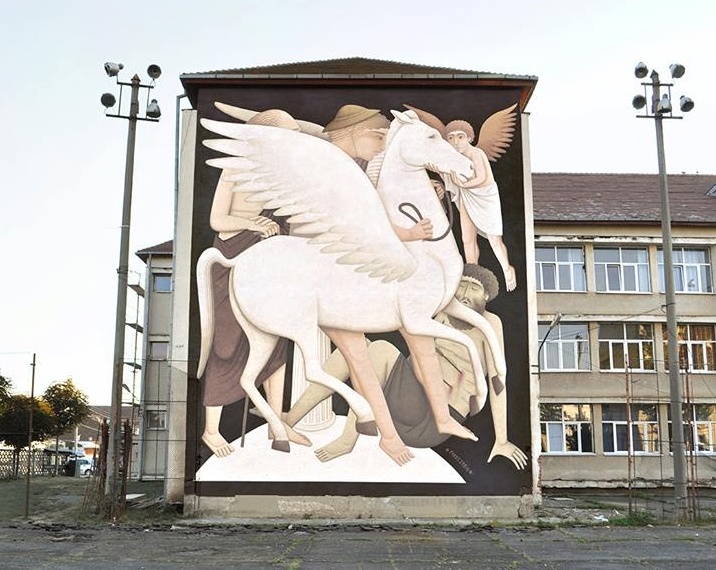 Having worked as a graffiti artist as well as an illustrator of Orthodox Christian temples, Fikos continues his evolutionary career through large frescoes in public spaces, whose value is unique, as it is the first time that monumental Byzantine art meets contemporary art.

He is internationally recognized, having painted and been presented in all lengths and widths of the world, such as Greece, France, Bulgaria, England, Switzerland, Ireland, Lithuania, Spain, Ukraine, Thailand, the Austria, Norway and Mexico, in exhibitions and museums, private and public spaces, the television and the radio, each time receiving dithyrambic reviews. One of the best point of views in his excellent biography was when he was hosted at the famous Sacred Space Gallery in Notting Hill.

In 2014, he even painted at the Swiss Federal Institute of Technology in Zurich, the world-renowned University, which is consistently recognized each year as one of the top universities in the world. Its long history includes 21 Nobel Prizes awarded to its professors or students, one of which was Albert Einstein, the most recent being Richard F. Heck, in 2010.

“I believe this project honors Greece especially during this difficult time, but it also has a very social character due to the kind of art that is very popular nowadays,” the artist said.

The illustration of ETH Zurich’s interior came from a tribute to “The Washington Times” newspaper about Greek street artists, which impressed the professor and building manager.

In 2016, his work entitled “Earth and Sky” in Kiev, which was called to paint for the Mural Social Club, a project organized by the Sky Art Foundation, has a height of 46 meters and was created within 13 days while being the largest fresco in the history of Greek art. He painted a universal theme, with colors inspired by the building itself and the neighborhood. 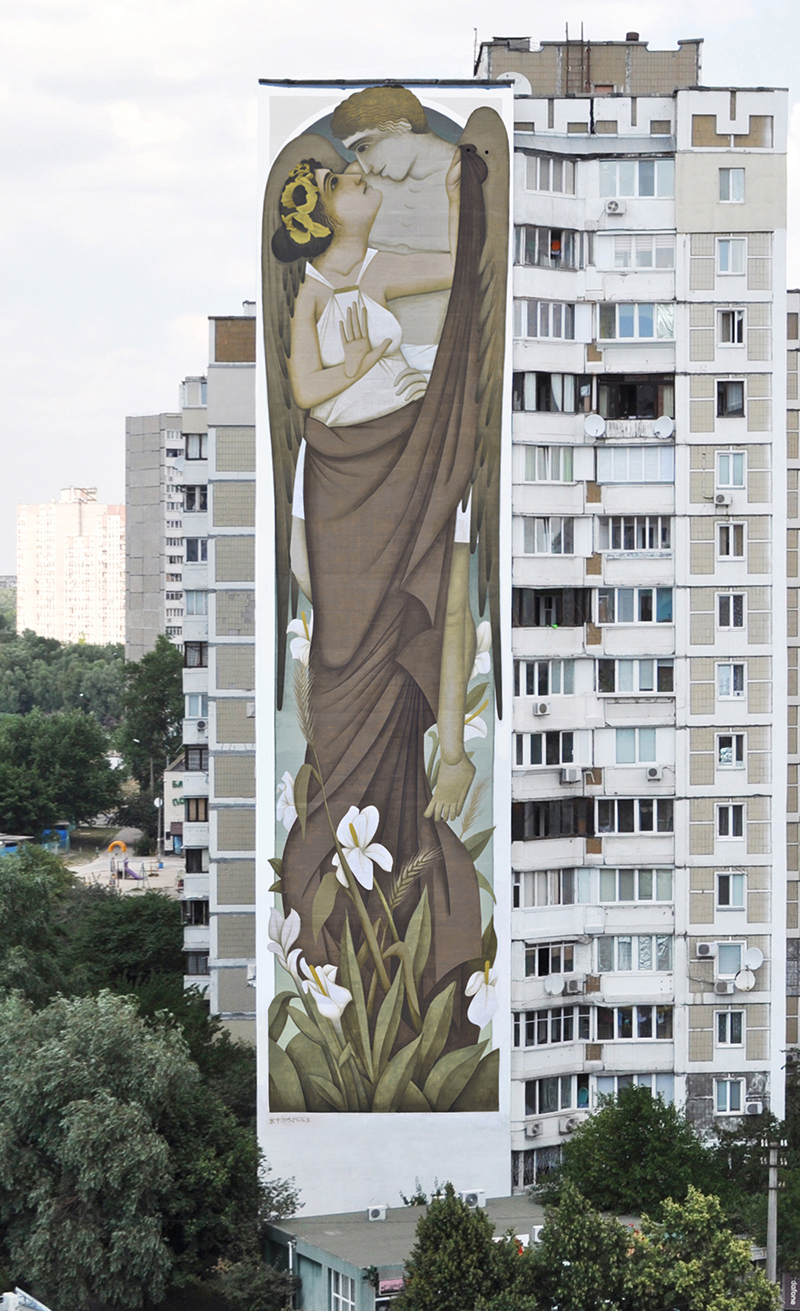 In 2018, in collaboration with author Rodula Pappa, the book “When I Grow Up …” was published, with twelve magnificent full-length paintings painted by Fiκos, depicting occupations of nowadays, such as the programmer, of the last decades and centuries, such as the paleontologist and astronaut, but also archetypes, such as the teacher, the stock-farmer and the musician, with the aim of introducing the professions to the children as cues and causes to be interested in rather than as an encyclopedia of professions. 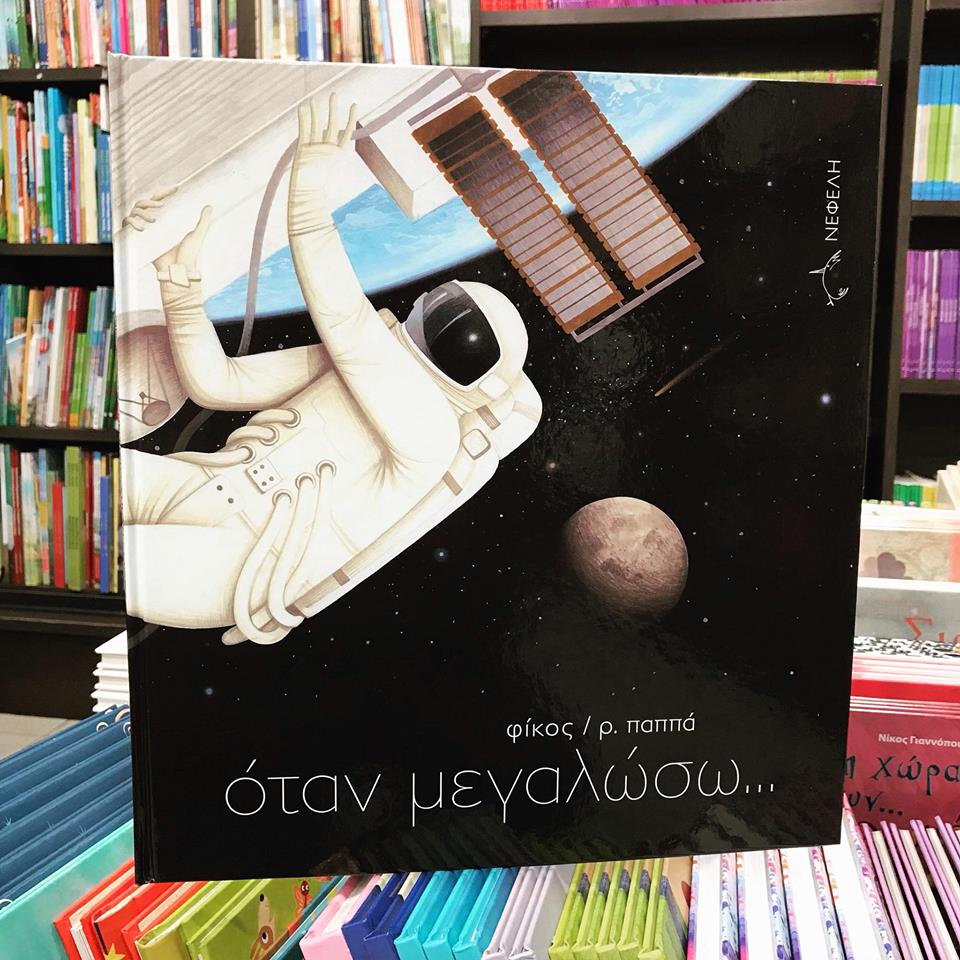 In 2019, he launched a new visual project entitled “We New Greeks”, dedicated to today’s bright examples of the modern Greek, examples that highlight the value of man, beyond their achievements, to people who know – in his belief – know how to keep going. Persons like Yiannis Antetokounmpo, George Lanthimos, Stefanos Tsitsipas and Mikis Theodorakis become “saints”, wearing halos and thus showing their importance to Greece and the people. 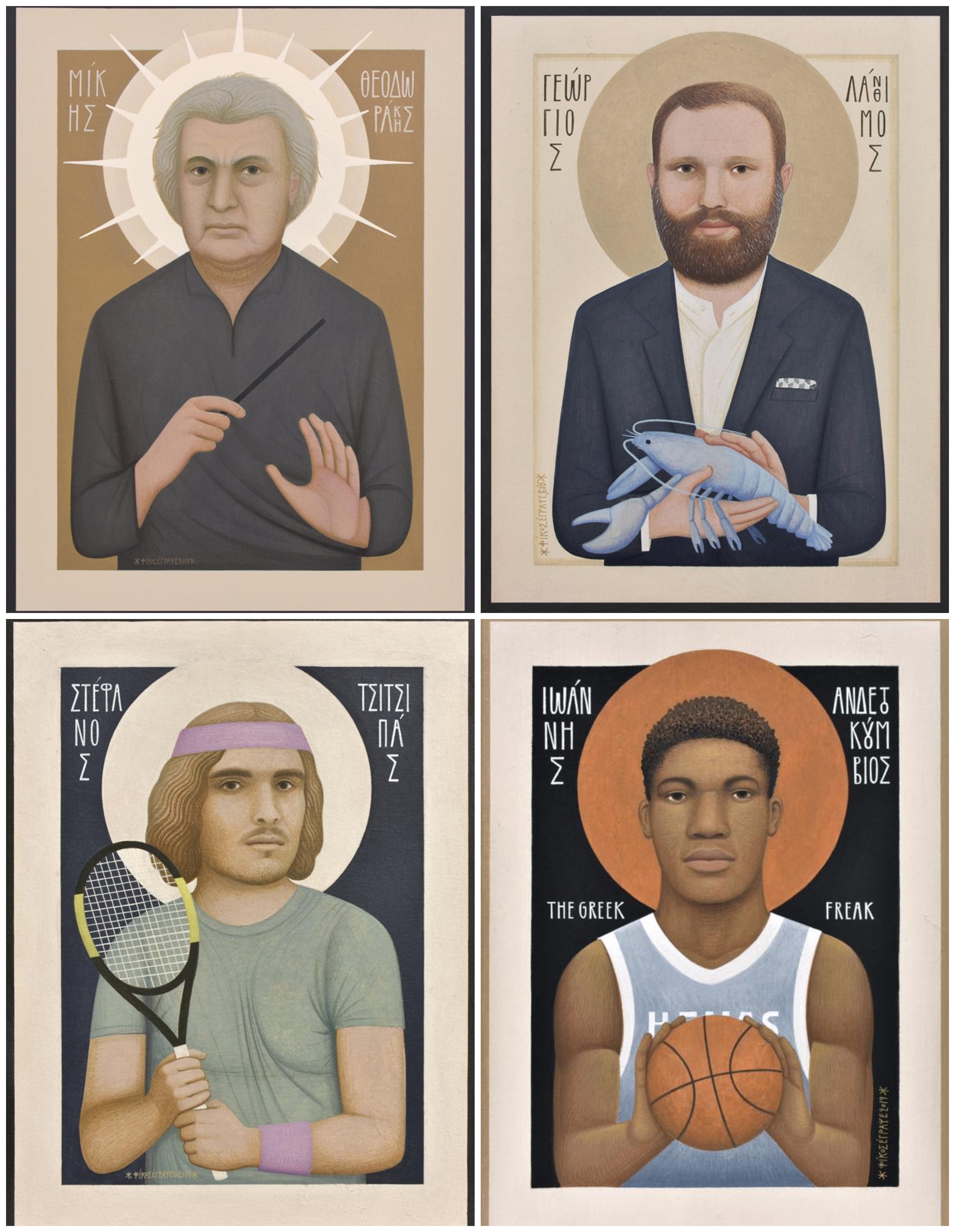 The next step he plans to take after completing portraits of celebrities who are alive is to move on to important 20th-century celebrities who have passed away, such as Elytis, Tsitsanis and Papanikolaou.

Asked about the greater benefit to him from his work and art, he replies: “I think it’s my spiritual cultivation, which comes from what I do. That is, getting into the process and reading every day, learning new things, combining knowledge and daring for something new, “seeing” the world differently. Yes, it may be a cliché, but I think being involved with art has made me a better person. I think it is everybody’s duty, but especially an artist’s, to be restless.” 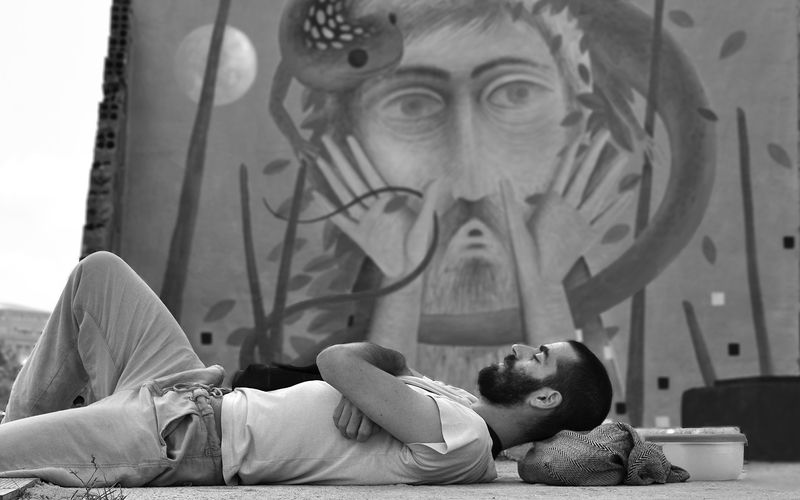 His dream is to disseminate and establish contemporary Greek painting worldwide, not as a nostalgic achievement of the past, but as a modern universal event.

As for what God means to him, he says, “As an Orthodox Christian, I believe in the God who professes my faith. If I had to say in a word what God is to me, that would surely be ‘love’.