Amy Sedaris is a famous Greek American actor, writer and comedian. She often works with his older brother David.

Amy was born on March 29th, 1961, in Endicott, New York. Her father was of Greek descent and her mother was Protestant, while she herself is Greek Orthodox following her father’s lead.

“We celebrated Greek holidays. Our Easter’s about a week or two after American Easter. It was just strange. My father’s mother lived with us for a while and she only spoke Greek”, Sedaris has stated in a former interview.

Her first major foray into television began in 1995 on the Comedy Central sketch show. Beginning in 1999, Sedaris starred in Strangers with Candy and has made numerous guest appearances on a number of different television shows, including Monk, Sex and the City, Sesame Street and Just Shoot Me. She has also appeared on many popular talk shows, like Jimmy Kimmel Live!, Late Show with David Letterman and Late Night with Jimmy Fallon.

In cinema, Amy Sedaris has had secondary roles in various films and took part in dubbing projects, like for the film Shrek. 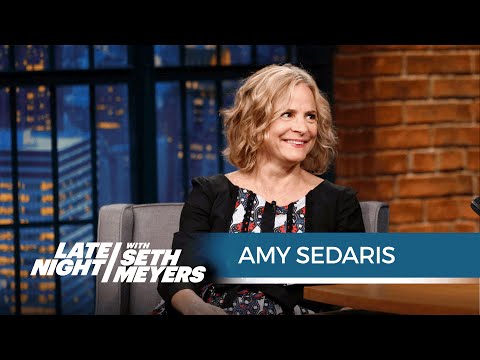