The colourful “voice” of the streets

Street artist b. works on a wide range of works from painting to urban installations and sculpture, while traveling and painting walls in cities all over the world. The colourful images he creates stand out for their unique style.

He has represented Greece at the 13th Biennial of Architecture in Venice, has exhibited works at the Benaki Museum,DESTE Foundation for Contemporary Art and ART-ATHINA, and has made murals, works and exhibitions in Miami, New York, London, Beijing, Tokyo, Osaka, Dubai, Rio De Janeiro, Cape Verde and many other parts of the world.

He was born in 1982 and grew up in Kypseli, with parents not related to art. His first real acquaintance with graffiti was when his friend designed the Cypress Hill brand on a basketball basket. Even if he had not painted it himself, he had felt excited and impatient to learn more.

In 1996, at the age of 13, he formed his first crew, with the largest member of the group being 15. He was always a good student and in the Pan-Hellenic Exams he entered the Architecture University of Volos – without having had any drawing lessons – although the teachers tended to not do him justice because they saw, as he had said, that he was bored – in fact, his mathematician apologised to him when the artist wrote 19.9/20 in mathematics.

In Volos, Architecture, the crew and the “streets” were replaced by his fellow students, the faculty and his interests changed and included art and music. His teachers (Psychoulis, Tzirtzilakis, Antonas), who influenced him particularly in thinking, recognized in b. the “bug of graffiti” and helped him develop it. 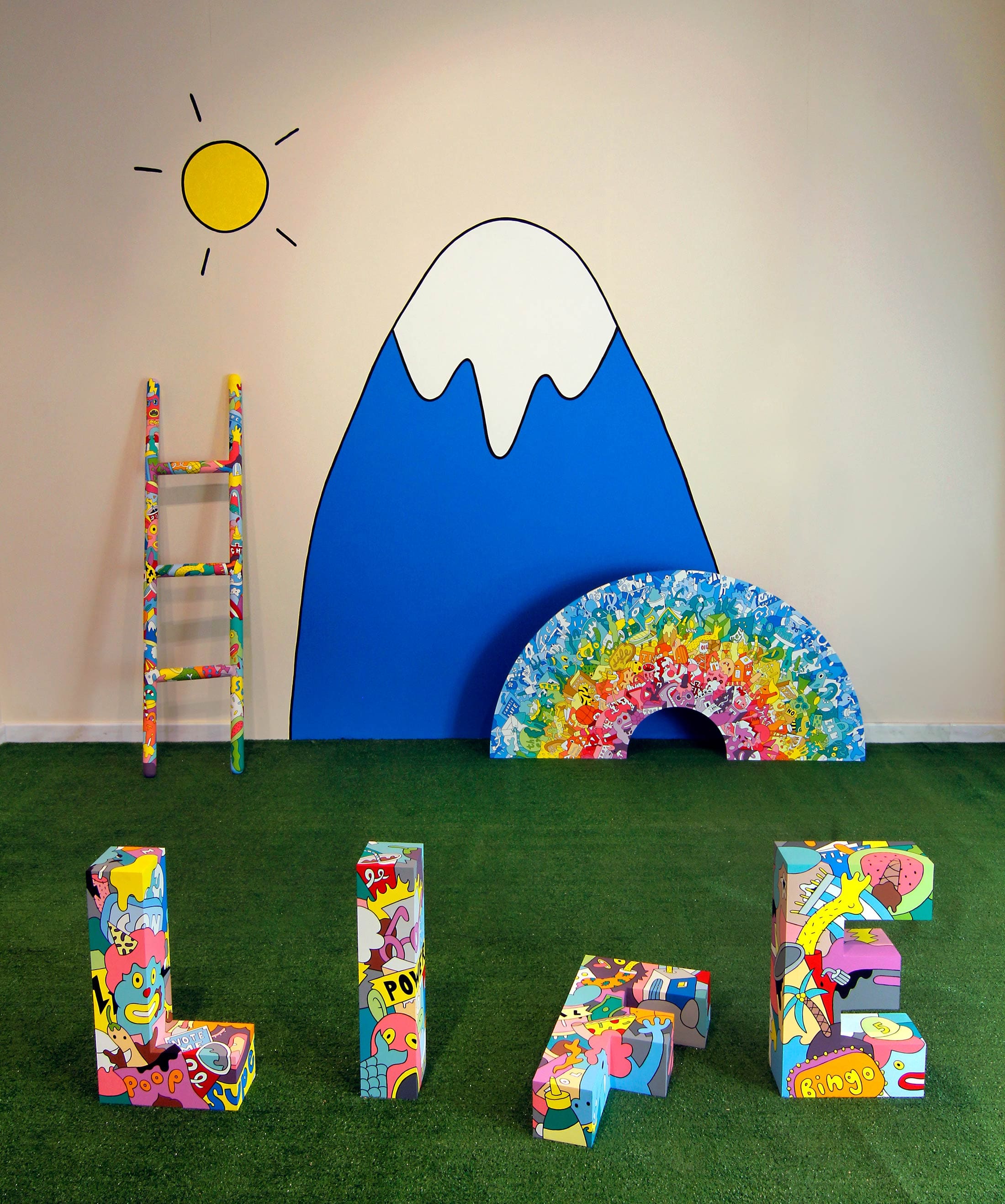 Their influence in conjunction with Banksy, who had appeared at the time and “changed everything in the field,” according to the street artist, made him not want to do just graffiti but something more artistic. “So, I tried to make something of mine, more art.”

Over the years on the streets, he knew how to move into the city, so when he was given projects and the freedom to do things by the school, he had open horizons and knew what to do. He combined the graffiti logic with that of architecture and art and used their amalgam to express themselves artistically. 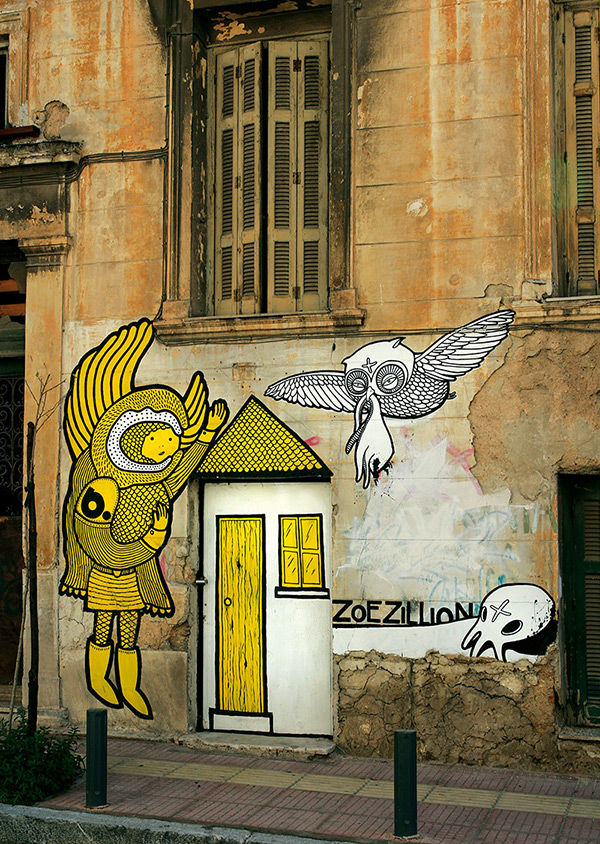 In 2001, in the first year of the university, he met Zoe in Athens, a legendary-for-b. street artist, and followed her in Berlin where she studied. The artist stayed there for a month. “There was a craze and you saw everything on the street, even Banksy, it was a very hot phase in Berlin at the time. It had a crazy vibe.” He went three years in a row, one month at a time, and it was then when he made his first projects abroad.

In 2010, he began his conscious orientation abroad, as he decided to chase his luck, as he says, and to travel as much as he could. He painted a large project in Japan, Brazil, Osaka and in 2011 Wynwood Walls in Miami, a major project that Tony Goldman had started some years ago.

Wynwood Walls, from a ghetto with gangs, ended up being a walled space that inside has a restaurant and gallery with over 500 enormous murals by the world’s greatest artists working in graffiti and street art. In 2011, while the Greek street artist had started collaborating with the New York Opera Gallery, he received his own invitation to design at Wynwood Walls. 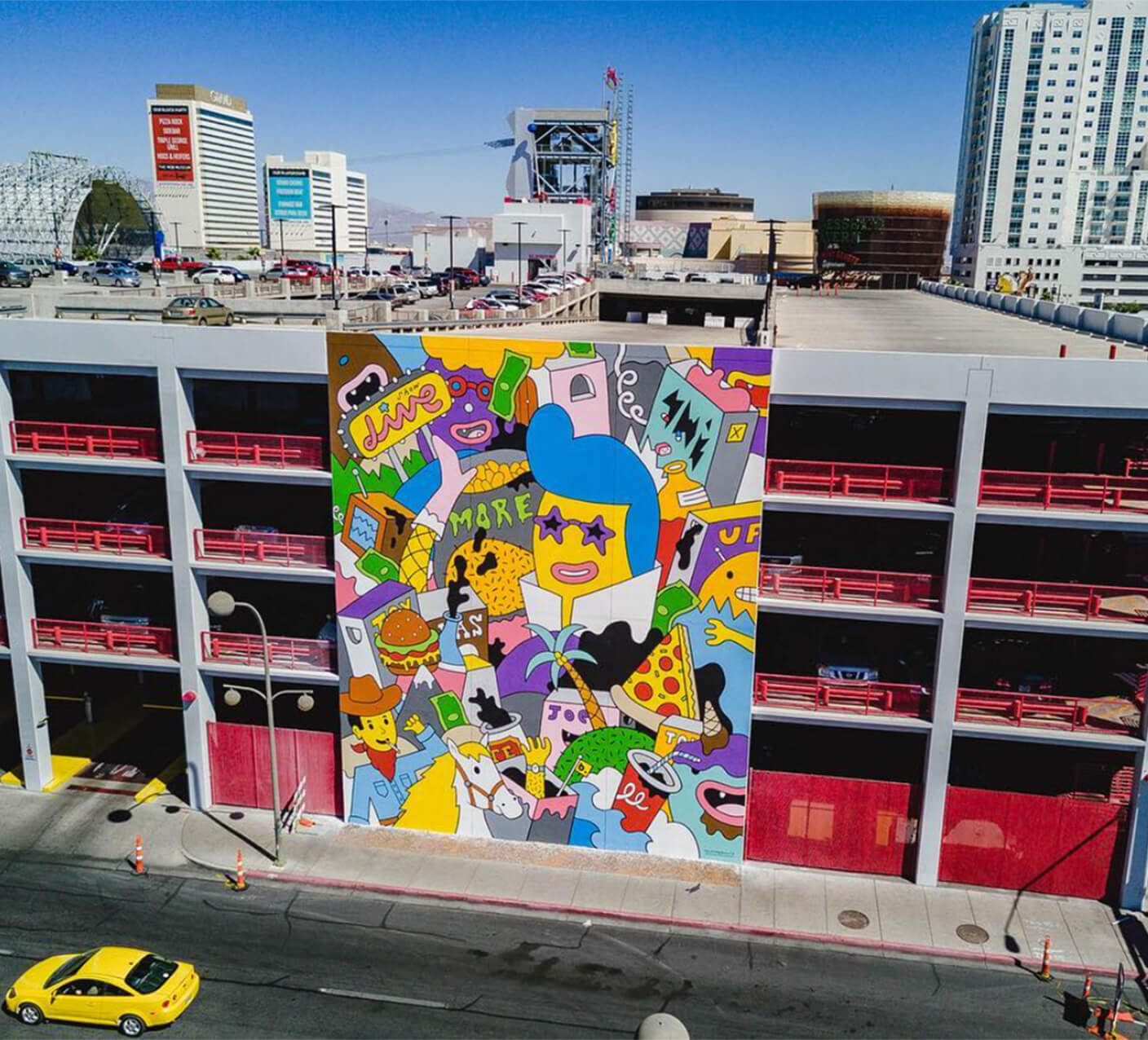 The following year, in 2012, he made the facade of the Greek Pavilion at the Venice Biennale of Architecture and in 2013 he attended a project in Detroit where Library Street Collective collaborated with an empty city building and on each floor street artists created murals on the walls. In 2015, he made his first solo exhibition in New York, a landmark for him and a dream coming true.

In 2018, his collaboration with New York’s Alloucheche Gallery, which was much more politicised, created the exhibition entitled “Space Occupied Space” with the initials “SOS”, a call to the world about what is happening today in the world. It consisted of a series of supermarket shelves, which, instead of prices, had statistics on global poverty, climate change, freedom of speech. 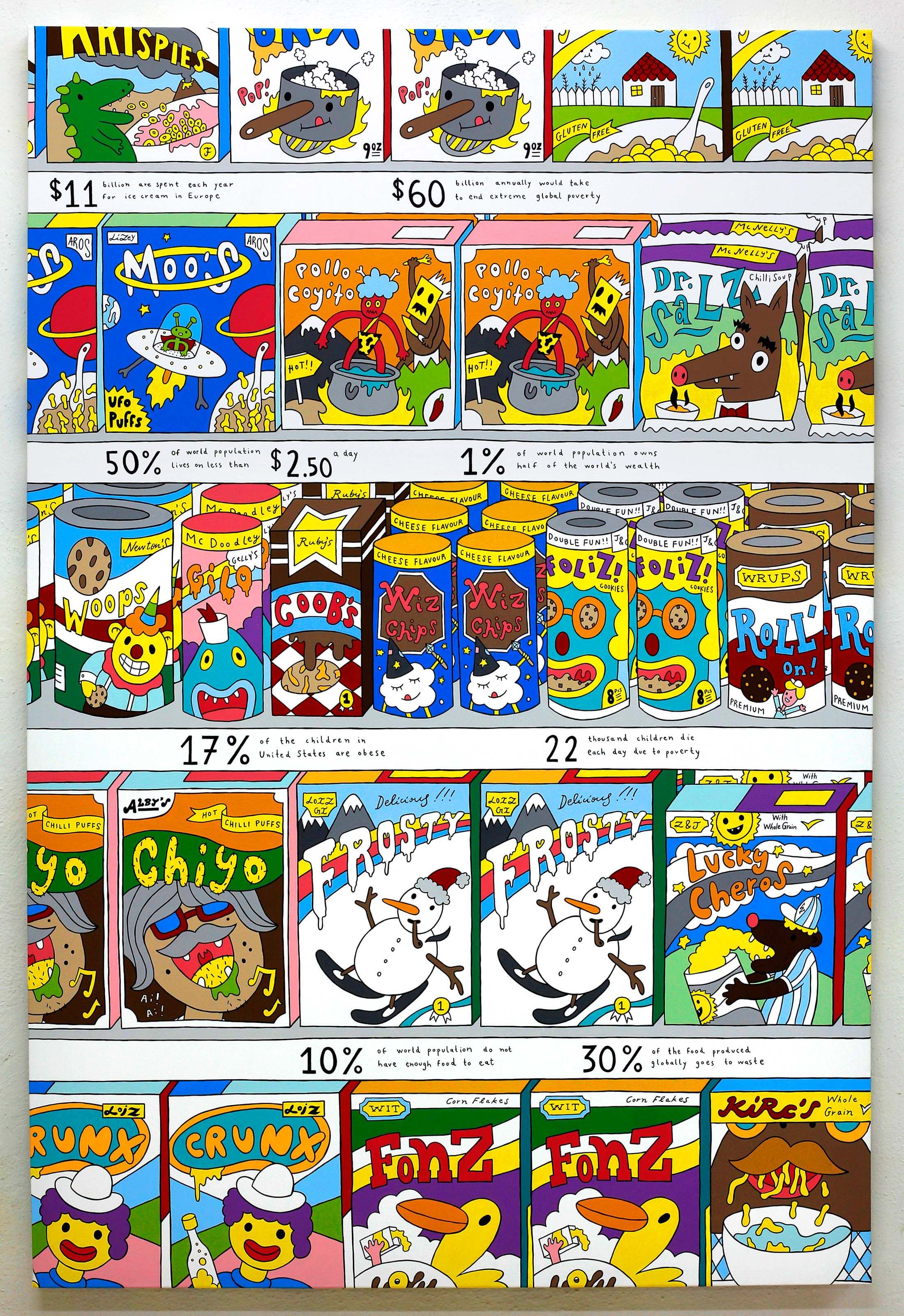 “It was essentially a concept I’m working on and has to do with the occupation of space. That is, I symbolically occupy the supermarket shelves and, instead of prices, I put statistical data from global organisations, the United Nations, which is actually from surveys: “50% of the world’s population lives with less than $ 2.5 a day “,” 1% of the Earth’s population holds half the wealth of the Earth”. “98% of the Ethiopian population has no access to the Internet”, “$ 60 billion can solve the problem of extreme poverty, while spending 30 billion on perfumes or for ice cream only in Europe and America”. This data can create an image for the world today,” he explained in an interview.

Having an acute critical eye, the basic inspiration of b. is television and advertising. Over-consumption and manipulation of the world through television prompts him, as he says, to comment aptly and with a small dose of irony on topical issues and to present this aspect of everyday life. “The desperation of the world and the shaping of political scenery makes me wonder and listen to the pulse of society.” 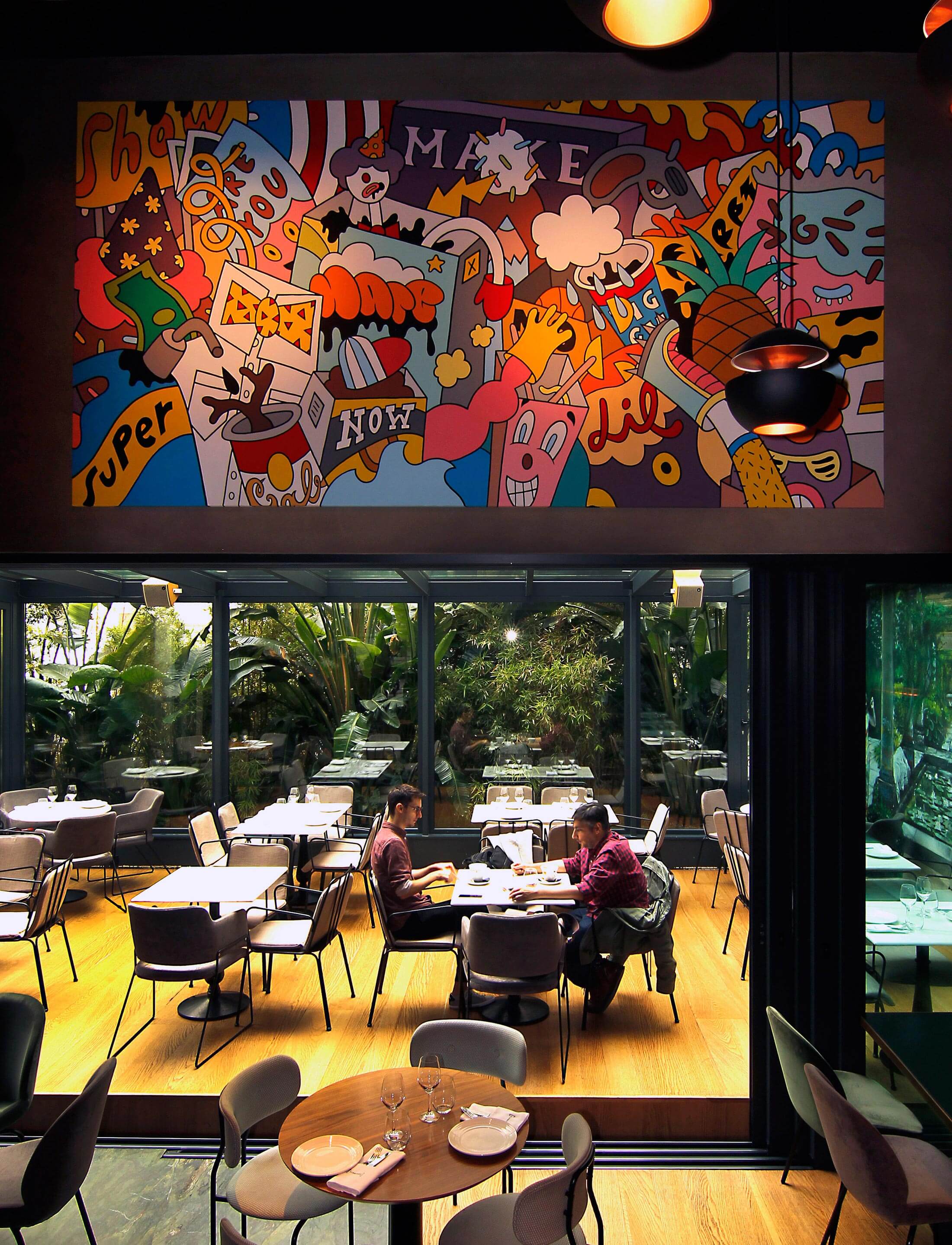 The characters in his wall paintings are mainly surrealistic and through an alternative reality that finds fertile ground and impresses even in the core of everyday life, the city tries to give a stimulus to those who are confronted with the dull urban landscape.

The idea of ​​the yellow-and-white trademark of his murals came from the policy of multinational corporations. With the yellow and black, his work acquires an identity and can easily be identified in the city among thousands of graffiti and the logos of multinationals dominating. In particular, the bright yellow colour attracts the attention of passers-by, and now his designs are automatically recognized wherever they are.

His work is part of the city and by creating on the road he feels he “creates” life on the walls. “The galleries in Greece are not part of everyday life in the world, while street art penetrates into the lives of citizens, and although one does not seek to see it, it express and supplement people’s thoughts to a great extent. However, galleries are given the opportunity to exhibit designs that can not be displayed on the street. In addition, it is very important that the art of street artists has drawn the attention of the galleries.” 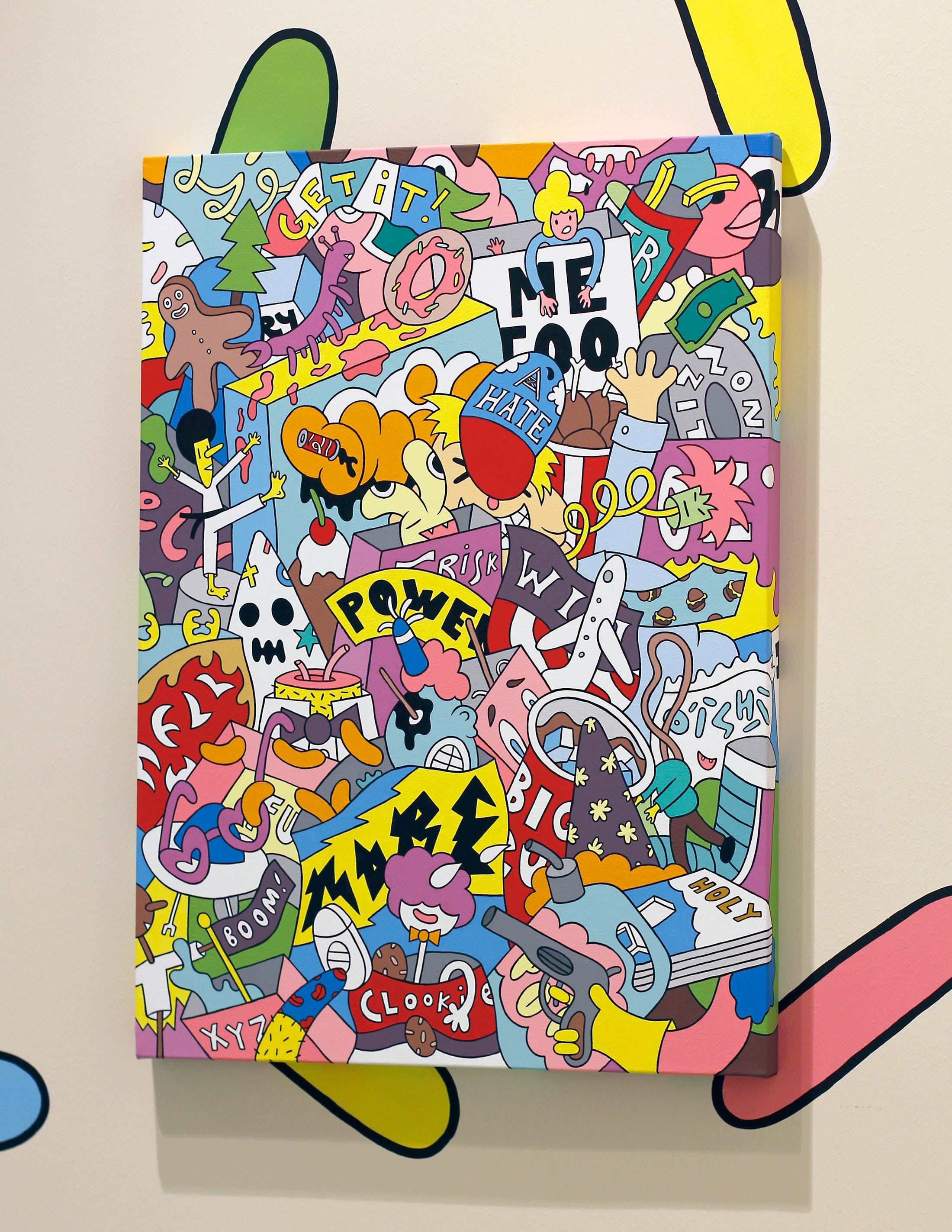 When asked if he has ever feared on a trip so much that he would not do it again, he says he was often afraid, especially in places like the favelas in Rio, where he watched children with Kalashnikov and drugs in hand, or in Tokyo in areas controlled by yakuza. There were frightening moments in Athens as well. “Now that I’m thinking about it, maybe some of the things I remember I wouldn’t do again, but maybe you don’t realize the danger when you live it right then, it’s different.”

Street art is a part of him, as he says, but he works more in the studio now. The financial crisis has affected him considerably, having dreamed of working as an architect on a solid basis, but “unfortunately in Greece things are stagnant.” Even as an artist, he tries to work more abroad.

Strength, at this stage of his life, is given to him by his daughter; when he plays with her he lets go and feels like a kid again. Those moments help him to “live the moment”. “As long as I play with her, I do not think of anything. My daughter changed me very much. I do not think so much about myself, there’s another priority. And my wife and my child give me joy. ” 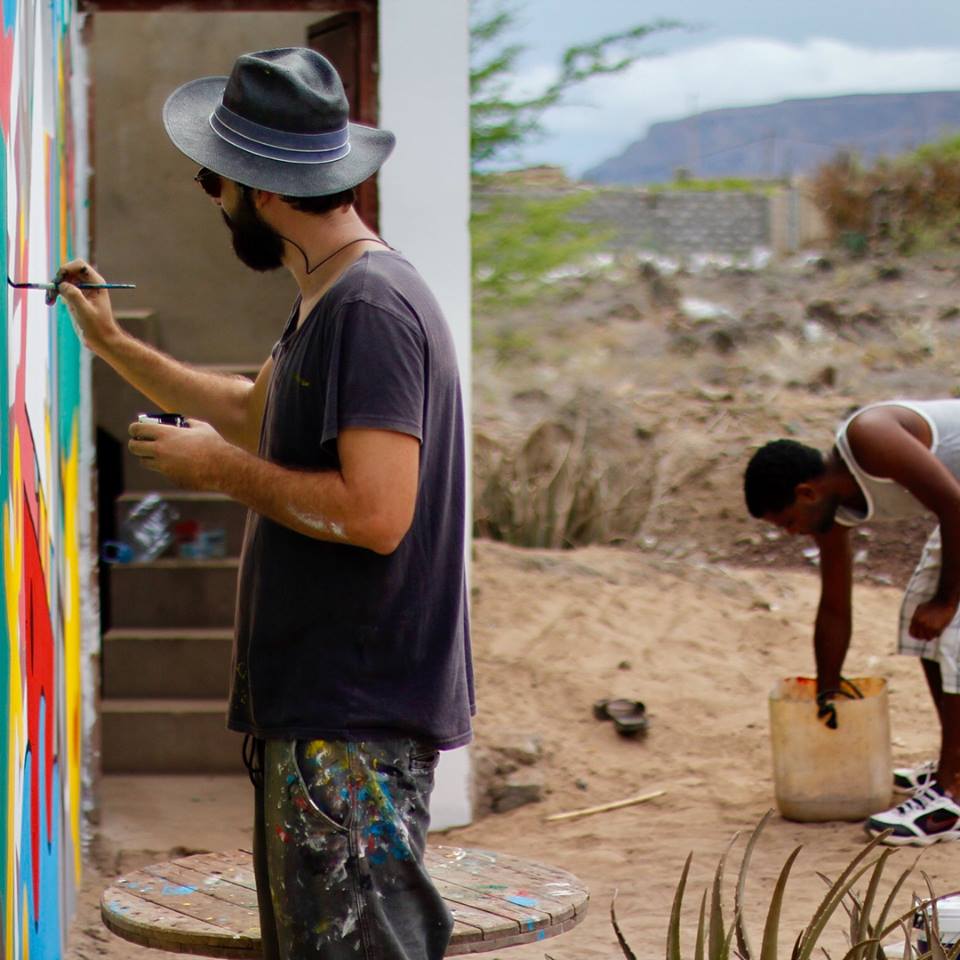 To the question of how much the images an artist makes change when he makes a family and how much and how his daughter’s arrival has influenced him, he replies that he always feels that an artist must follow his obsessions but also the experiences to produce his work without counting and overthinking things. “The fact that I have a family and I have become a father has influenced me to be more sensitive as a person and to redefine basic things in my life and in my work.”

In his life, he follows the saying that his father always says, “Be decent, do not be lazy, say what you mean, have dignity, as it was in the old days.” “My grandparents and my great-grandparents may have no money, they did not really eat, but they were decent. I often think of it later and I say to myself “keep it in your mind””.

In the future, street artist b., in general, wants to continue traveling and painting in different parts of the world, evolving as an artist and doing what he loves. In particular, his next projects are the publication of a book with his various travels abroad, where small stories of graffiti will be presented.