The academic of art with the scientific vision

Aphroditi Psarra is a multidisciplinary artist and academic who is involved with electronic textiles, electronics and sound, while her works include digital audio synthesis through DIY techniques.

Her artistic interest focuses on concepts such as the body as an interface, contemporary handicrafts and folk tradition, pop iconography, retrofuturistic aesthetics and the role of women in contemporary culture.

She is a Ph.D. at Complutense University in Madrid and her academic research focuses on the merge of science fiction ideas and concepts with performative and digital practices and offers a philosophical, sociological and aesthetic analysis of the influence of new technologies in the contemporary artistic process. 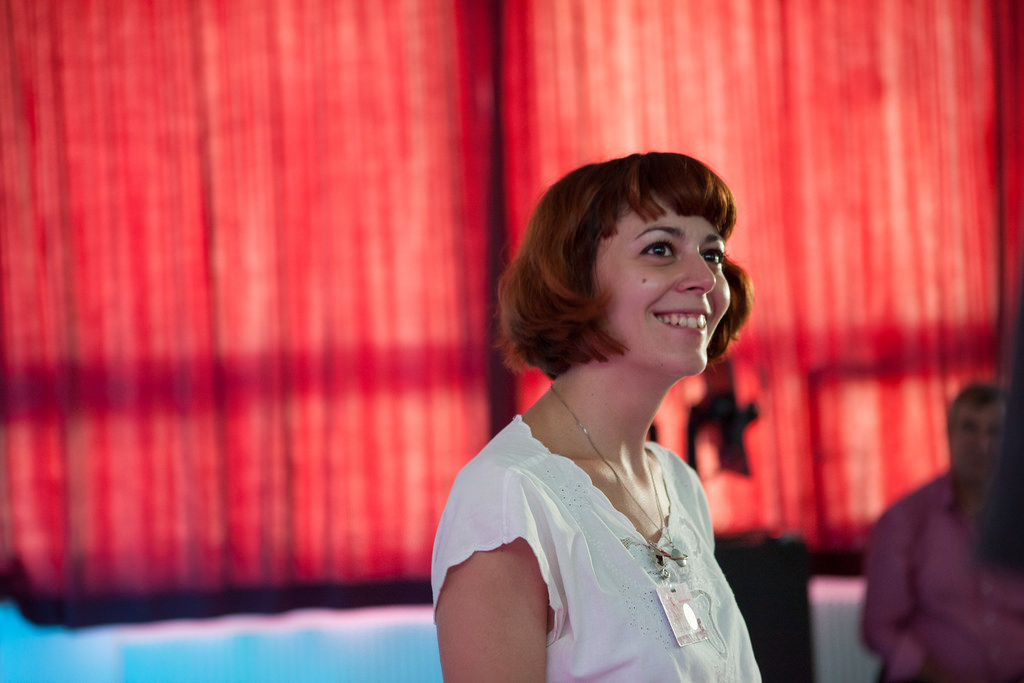 Aphrodite Psarra was born in Athens in 1982 and began studying at the Department of Plastic Arts and Sciences of the University of Ioannina in 2000. In the academic year 2003-2004, she received an ERASMUS scholarship from the State Scholarship Foundation at the School of Fine Arts in Madrid of the Complutense University.

In June 2005, she took her degree, and since the November of that year until June 2007, she attended the courses of the Master’s program “Image, Technology and Design” of the Design department II of the Faculty of Fine Arts of Madrid. In 2007, she delivered the work “The Moving Image & the Visual Culture of the 70s & the 80s: Punk & Cyberpunk Current tendencies” and obtained the DEA (Degree of Profound Studies) Diploma with Excellence.

In November 2014, she worked as an intern at the Disney Research Zurich research center in collaboration with the Technical University of Zurich (ETH), in the Wireless Networks and Mobile Computing division, on the creation of wearable technology, physical prototypes and toy hacking, and participated in the international New Siggraph Technologies Conference in Vancouver. 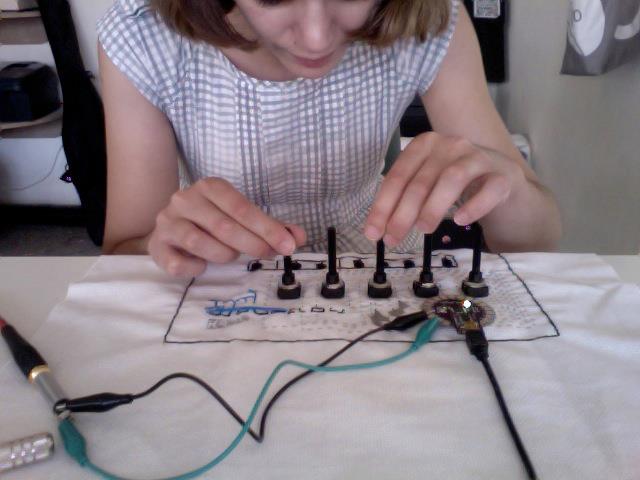 In the same year, she received her Ph.D. from the School of Fine Arts in Madrid, and from 2016 until today she is an Assistant Professor at the Center for Digital Arts and Experimental Instruments (DXARTS) at the University of Washington, Seattle, USA. There, she also manages the SoftLab, which she created and is dedicated to experimenting on clothing.

Her Ph.D. research was on cyberpunk literature and media performance, so she got deep in exploring cyborg aesthetics, but working with e-textiles was something that occurred naturally in her artistic practice. As a grad student, she got into learning creative coding and was spending a lot of time in front of a computer screen. As a previously trained visual artist, she was familiar with working with her whole body and mostly making stuff with her hands. So while learning how to code, she got into embroidery and getting to know the field of e-textiles. “It was a great opportunity for me,” says the artist, “to combine my two different approaches to art.

I find the idea of crafting, the laborious skill-acquiring process that this field provides, and the underlying link with tradition, all very appealing. I also see fabrics as interfaces between our bodies and the world, meaning that a fabric/garment acts as a second skin, without being intrusive to the body itself.” 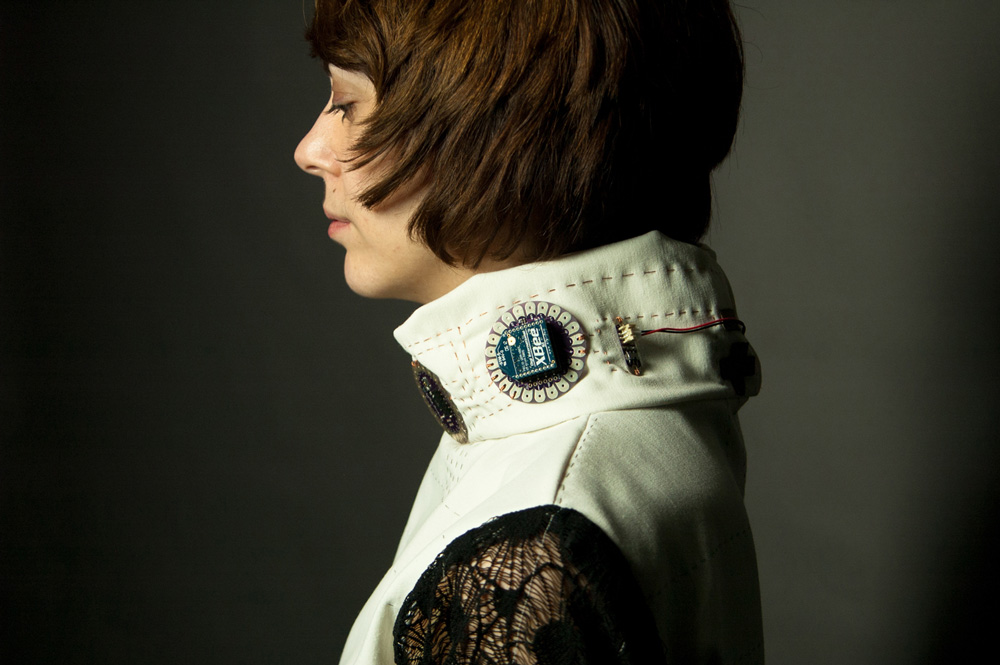 In 2011, Afroditi Psarra, with an incurable passion for cyberpunk literature and a soft spot for traditional crafting techniques, realized a self-made fabric synthesizer and played it in a live performance. As a result of her experimentations with LilyPad Arduino white noise generators was Lilykord, one of the first outcomes of her constantly evolving research in open-source sensitive wearables with embroidered electronics.

The materials she usually uses are basically electronic components, sensors, and fabric, while the result is hybrid wearables that let whoever put them on to become an interface. In e-textiles functionality and aesthetics go hand in hand, according to the artist. The placement of electronic components or other materials (like conductive or resistive yarns and fabrics) is key to creating functional circuits and meaningful interactions. In her projects, she is interested in creating something technically functional, as well as aesthetically pleasing.

In 2013, Afroditi Psarra presented an interactive sound performance called Idoru(), which is meant to transform the human body into an interface through a particular non-pervasive electronic garment sewed with sensors. With its minimal retro-futuristic allure, the dress translates into frequencies and data every movement of the performer within the space and then converts them into sound. Thanks to a LilyPad Arduino microprocessor, a Xbee wireless antenna, a conductive thread and fabric, and a little over, the performer is able to create an immersive soundscape to be physically experienced by the viewers.

Among her creations is Cosmic Bitcasting, a neoprene tunic with embedded actuators that enables the human body to perceive and visualize cosmic radiations all around us and then to upload all the outputs on a computer.

Another work is Fractal Antennae, a fractal is a neverending pattern repeating itself over and over in a loop. It is both a mathematical element and a natural pattern. but basically it is a research project that aims to experiment with different fabrication methods to create wearable fractal antennas, that can be used with different Electromagnetic Field detector circuits as transmitters and receivers to pick up radio waves. 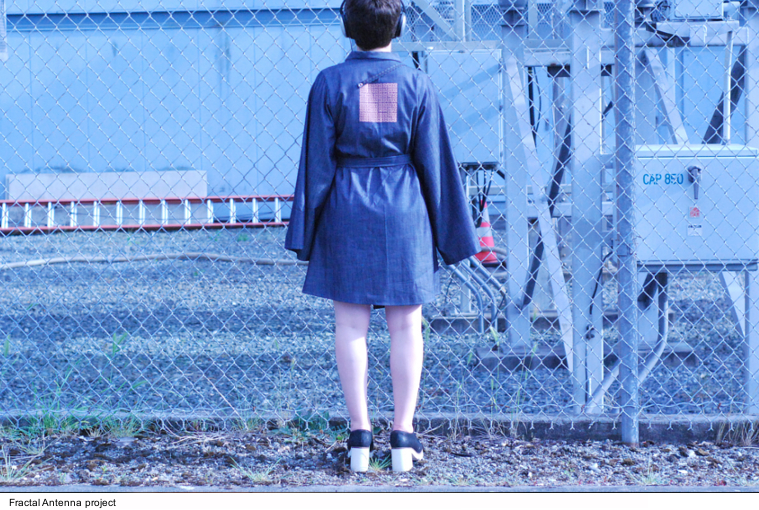 Although this work has not been completed, Aphrodite Psarra has so far experimented with different materials such as copper-based conductive yarns, resistive yarns containing silver, pure copper taffetà, silver-plated lycra and silver/cotton based fabrics, laser cutting, with hand and machine embroidery for the conductive threads and machine knitting for the resistive yarns.

Most of her works are the result of collaboration with other professionals (physicists, architects, artists, etc.), with each collaboration being different and equally interesting to all involved. In fact, in 2015, along with the architect, Daphne Papadopoulou, she created the series “The Culture” in Milan. She was inspired by Iain M. Banks’ “The Culture” series and symbolizes her strong connection with cyberpunk literature.

She says that her position as an artist is to create/design interfaces and mechanisms that provide a critical/poetic interpretation of the world that surrounds us. She would like to see these data on open servers to be used for citizen science, artistic purposes, or furthering research on scientific phenomena. 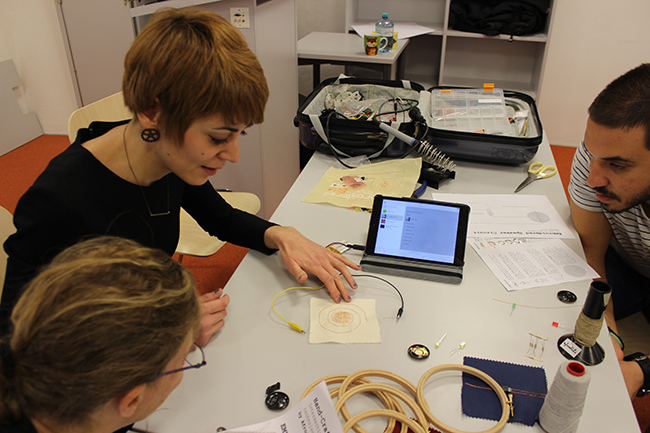 To the question of what inspires her most between technology and literature, Aphrodite Psarra replies that science fiction literature is her haven and she likes to immerse herself in unknown future worlds, with no manuals or datasheets.

“I feel that literature that engages with technology doesn’t have to be based in real-life scientific “truths” – unless we’re speaking about hard sci-fi which is a completely different thing; Science fiction writers take the idea of technology as a starting point and develop it in completely unforeseen ways. Taking into account this speculative aspect of science fiction, I am utterly inspired to create art that can speak for the era that we are living in, by creating poetic representations and generating a critical discourse. Technology is just one of the mediums I use to do that and not the end goal.”

As far as the technology with which she wants to experiment in the near future, she replies that she n sensing the invisible and creating physical manifestations of it, so I would like to continue exploring radio-waves, while another thing she is interested in is crystal creation to grow and harvest my own electronics. “And last but not least, I want to learn how to weave and build my own loom”. 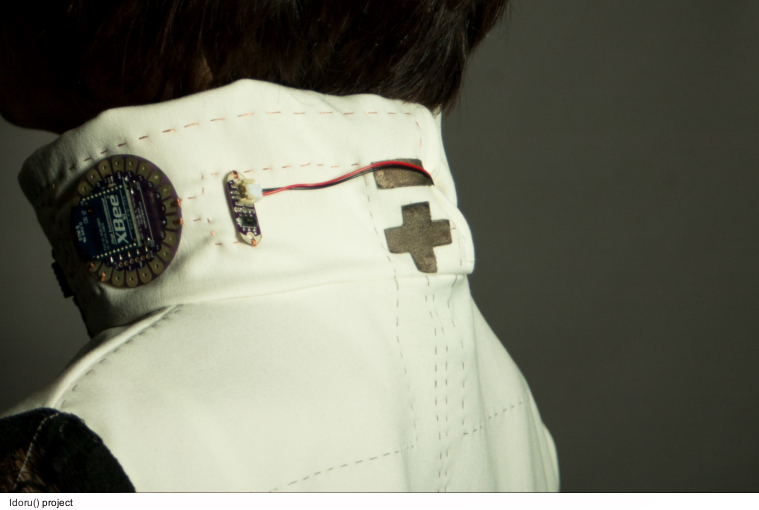 Her work has been presented in contemporary art museums such as the National Museum of Contemporary Art (EMST) in Athens and Bozar in Brussels, as well as in New Media Art Festivals such as ISWC (International Symposium on Wearable Computers) in Seattle.

She has been a guest speaker at conferences, universities in Mexico, Austria, Greece, Germany, Spain and the USA. She has been an Instructor of Workshops at exhibitions in Athens and the Netherlands and at festivals in Norway, France, USA and Austria. Her work has been presented on numerous platforms such as Siggraph in Vancouver, Ars Electronica in Linz, Transmediale and CTM in Berlin, Amber in Istanbul, Piksel in Bergen, Electropixel in Nantes and MakerFaire.

In 2013, she was awarded The Gloves Hacklab Fellowship for the project “Idoru()” at the CTM Festival and received the Maker of Merit Award for the project “Lilytronica” in MakerFaire Rome September 2013.

Aphrodite Psarra contributes to the further promotion of physical research, combining folk tradition, pop culture, handmade electronics and coding to create art, also transferring social, biological and environmental issues. Still, she keeps the tradition of knitting and embroidering alive and proves that, with the addition of a few natural calculations and conductive materials, it remains a valuable form of expression in modern times. 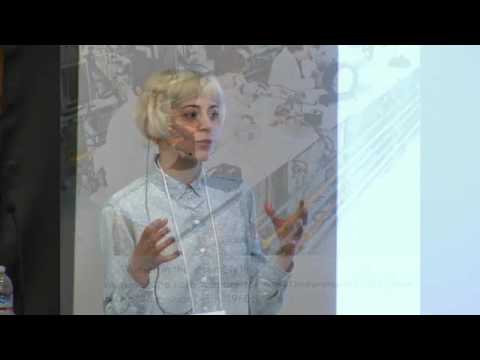